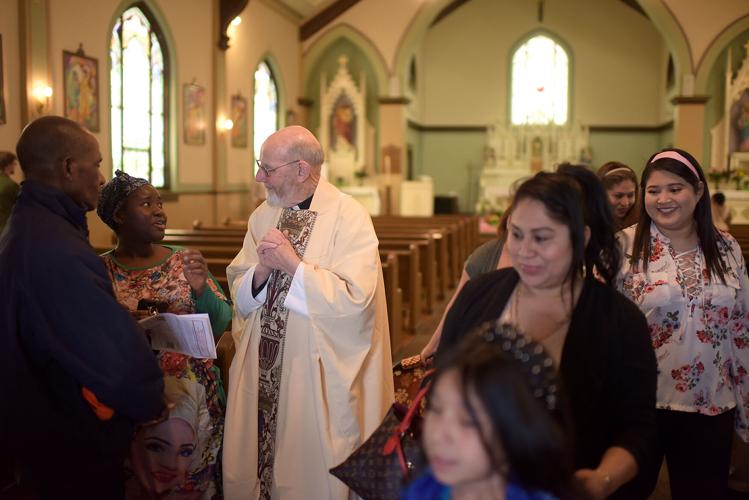 Patrons leave church after Easter Mass at St. Mary Catholic Church in Milan. Milan’s population is more than 1,800, according to the 2020 U.S. Census. 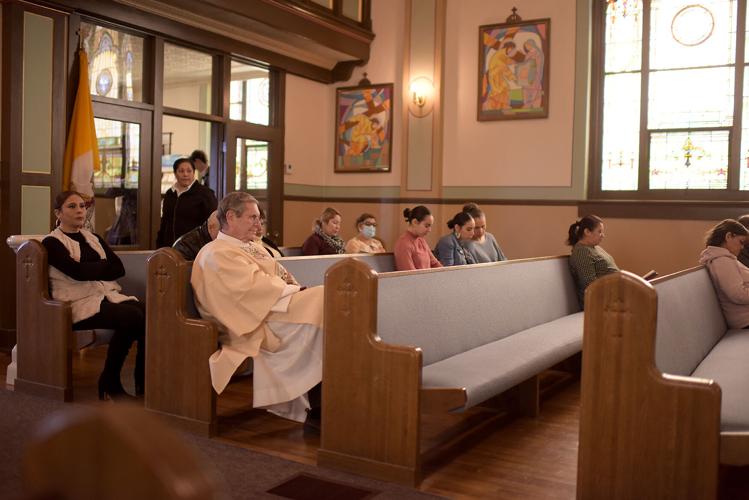 Church members wait for Easter Mass to start at St. Mary Catholic Church in Milan. Originally established by Irish settlers in the 19th century, the church is the center of prayer for Catholics of various national origins. 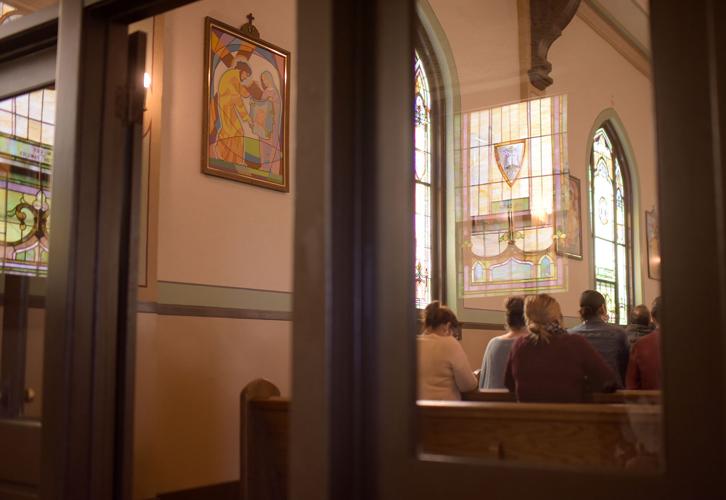 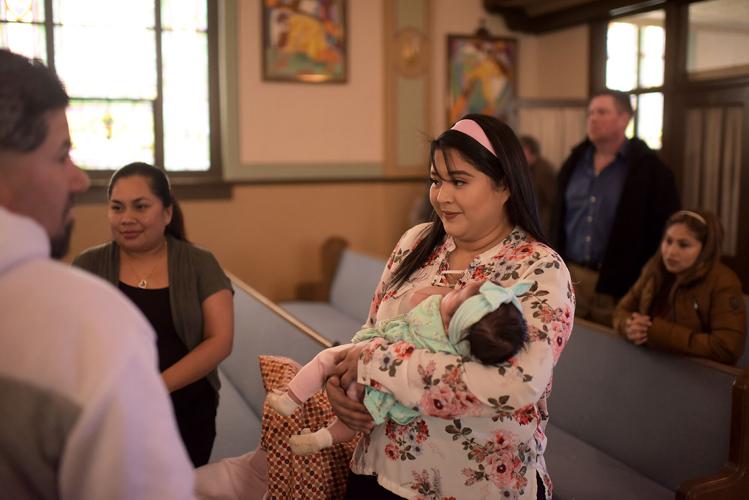 Maya Hernandez holds 2-month-old Nathalia Marriot, the daughter of a friend, after Easter Mass at St. Mary Catholic Church in Milan. The church has Sunday services in English, Spanish and French. 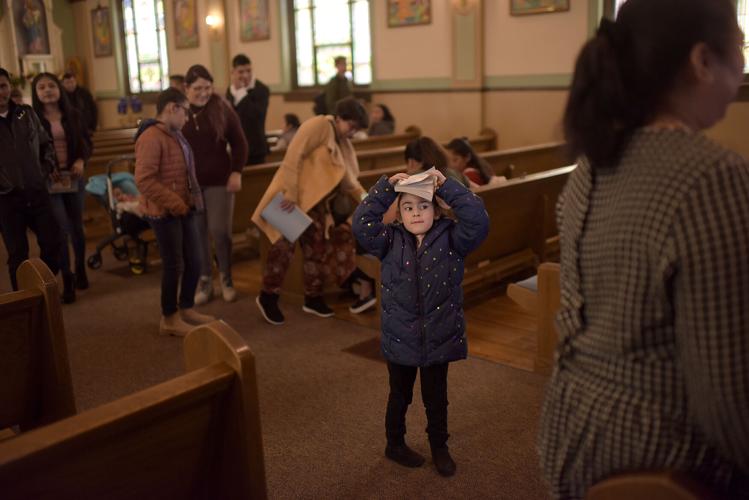 Nancy Baltazar, 5, of Milan, waits for her mother after Spanish Mass for Easter on Sunday at St. Mary Catholic Church in Milan. The Smithfield pork processing plant employs a significant portion of the town. 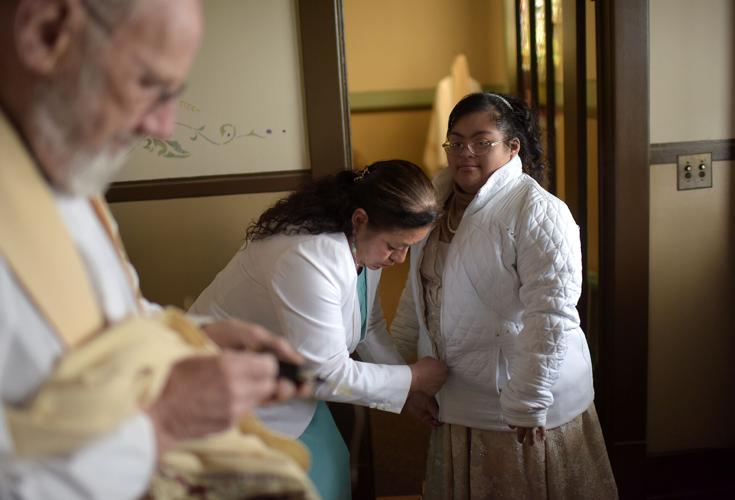 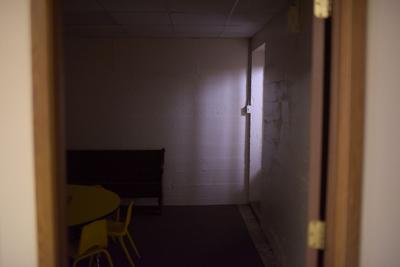 MILAN — On Easter Sunday, about 100 worshippers filtered into a 150-year-old church in rural northern Missouri for a Spanish-language Mass.

Lively hymns filled the room, echoing off of stained glass and reaching for the vaulted ceilings as the congregation sang along.

Weaver’s church has grown over the years to have a majority-Hispanic congregation, making it, in some ways, a microcosm of Milan’s demographic changes in recent decades. The Hispanic population of Milan, the seat of Sullivan County, has grown to a majority, largely because of the presence of a Smithfield Foods pork processing plant just north of town.

In only a couple of decades, Milan has grown into one of the most diverse places in Missouri.

Census data from the 2020 survey estimates that Milan’s Hispanic population has grown to 42%, a significant spike from the 0.3% estimated in 1990.

Locals say the 2020 estimate is an undercount. Weaver said he’d guess closer to 60%-70% of Milan today is Hispanic. Work at Smithfield brought people to north Missouri from Central and South America, as well as Africa and beyond.

And now, more Hispanic restaurants line the town square than any other kind. Kids grow up kicking a soccer ball down Main Street.

“Used to be, there were two drugstores, two grocery stores. The post office was on the square. There were two banks; there’s one there now,” remembers one longtime Sullivan County resident about Milan’s town square. “There were two clothing stores; there was a bowling alley.”

Jennifer Glidewell, owner of The Hair Gallery on the square, began noticing the changes in the town when she was in high school.

But before the pork processing industry put down roots in Milan in the ’90s, things were very different.

“Milan was dying,” said Dennis Ryan, a lifelong resident of the town. “Especially in the 1980s, when the agricultural economy just took a really bad turn, people were leaving Milan in droves.”

High land prices, massive farm debt and other adverse economic factors caused many Midwesterners to lose their farms in the 1980s, threatening the very existence of rural Missouri towns.

Then, in the 1990s, Premium Standard Farms chose Milan as its next pork processing site, creating jobs and potentially saving the town from demise. Premium Standard would later be acquired by the larger, Virginia-based Smithfield Foods, the company that runs the plant today.

Many of Milan’s residents agree that the plant remains vital to the town’s continued existence.

Ryan’s connection to Milan runs deep. After walking out of Easter morning English-language Mass, he pointed out that the first-ever Catholic Mass in the county was held in his great-grandfather’s home in 1868.

Ryan graduated from high school in Milan in 1970 and later spent four years in the military, which took him to Quantico, Virginia, just outside of Washington, D.C. He spent half a year in Europe on a cruise, too. But Ryan never wanted to live anywhere but Milan.

“It’s called Missouri mud,” he said. “You stick your feet in it, and you can’t get out.”

Not everyone shares Ryan’s attachment to Milan. As an employee of the school, he’s seen many of the town’s high school graduates leave town and move elsewhere, looking for college, trade school or work opportunities that Milan just can’t offer.

While a longtime resident like Ryan can appreciate the small-town charm of a place like Milan, that charm has its limits.

But for more specialized care, patients may need to travel more than two hours south to Columbia.

“Think about the fact that every time you want to do anything substantial,” Weaver said, “you have to make that trip.”

Milan has a small clinic, but “if anybody’s injured beyond a splinter or a cold or flu, you’re going to Columbia or Kirksville,” said Sullivan County Clerk Jackie Morris.

That means a lot of driving for many, and along the way, drivers are sure to spot billboard advertisements for one of the few things still bringing new people to Milan: Smithfield. “Good food. Responsibly,” the ads read, in a bid for new employees.

‘Business has been too good’

Maria Castaneda moved to Milan by herself when she was around 20 years old to work at the packing plant.

“I felt like one of those abandoned puppies,” she said.

Castaneda first moved from her home in Mexico to work in Iowa. Not long after her move, her place of employment closed. So, she moved to Milan to work at Smithfield Foods.

While working at the plant, Castaneda opened a food truck that has recently blossomed into a full-time job for her and her husband, and it’s one of the four restaurants in Milan.

“Business has been too good,” she said.

Their restaurant has been open on the town square for three years and is well known for its tres leches cake and shrimp cocktail dish.

One of her children, Mario Castaneda, recently returned to Milan and has noticed some of the demographic changes in the town.

“When I was younger … it was diverse, but not as much,” he said.

Now 22, he has briefly returned home from college and has been helping his family run the restaurant.

“I graduated (high school) with a class that maybe had 10 (Hispanic students) tops, but I feel like this class has more,” he said.

Some longtime teachers in the Milan School District, like Christa Widner, have experienced these changes firsthand.

“I taught kindergarten before I taught first grade, and so in order to help them (her students), because a lot of them coming in do not speak English, I picked up main phrases that would help them and things that are important in our daily lives,” she said. “I definitely cannot speak (Spanish) fluently … but I understand a lot more Spanish because I’ve worked with the parents and things long enough.”

Widner was born and raised in Milan and returned to the small town around 15 years ago. She has since taught at Milan Elementary School.

“When I grew up here, we had no diversity, and so you would go to Kansas City or Columbia, and it was such a surprise, and you were even maybe kind of shell-shocked,” she said.

‘We’re all the same’

Even with Milan’s renewed growth, the town is still smaller than it was in its prime before the agricultural collapse of the ’80s. But Smithfield’s hiring has brought a multigenerational change to the town’s culture.

There are new families arriving for work at the plant from all over the world, but those diverse families are also forming and growing in Milan. A cultural shift of that caliber doesn’t happen seamlessly, and some longtime residents noted instances of racial tensions in town, especially in the early years of demographic change.

That change continues to evolve. With a growing population of individuals from the Democratic Republic of Congo, Widner said French translators are sometimes needed in addition to Spanish translators at parent-teacher conferences.

“We do have at least two Spanish translators in the elementary and then the high school, and then we have had French translators also,” she said. “There’s language barriers, we have translators that come in at parent-teacher conferences and things like that, and a lot of the parents may have a friend or somebody that may come with them.”

But for Weaver, whose congregation has changed significantly, the work remains unchanged.

“I think part of my job is to be able to relate to people no matter where they’re from,” he said. “We’re all the same.”

Ella McCarthy contributed to this report.

Over 40% of Milan population identifies as Hispanic or Latino

Q&A: The evolution of rural economies