Thank you for Reading!

Unlimited access to ColumbiaMissourian.com without surveys for $5.95 per month, recurring billing.

Home delivery of the print edition, unlimited access to ColumbiaMissourian.com without surveys. $7.95 per month, recurring billing.*

*Home delivery is available in Columbia-area zip codes. Enter your address at signup to confirm delivery.

A Missourian file photo of Columbia Public School students searching through the salad bar during lunch. CPS requires students to choose at least one fruit or vegetable before checking out of the lunch line. According to new data collected by the Robert Wood Johnson Foundation, youth obesity rates in Missouri have held steady in recent years, neither increasing or decreasing.

Data released by the Robert Wood Johnson Foundation on Thursday shows the obesity rate among people aged 10 to 17 has held steady in recent years.

The obesity rate for this age group is 12.5%, or 73,800 people, which is neither an increase nor a decrease, according to the data. Missouri ranks fifteenth lowest in the nation for obesity rates in this age group.

Mississippi has the highest rate of youth obesity at 25.4%.

“It’s definitely positive. You have to stop (obesity) first in order to reverse it,” said Laina Fullum, director of nutrition services for Columbia Public Schools. “Since we’ve been on an uptick, for it to just halt is amazing.”

Now, she said, she hopes the rate begins to decline.

Julie Benard, a general pediatrician at MU Health who focuses on pediatric obesity, also sees it as a good sign that the numbers have stayed the same.

“While obviously we would love to see these numbers start to decrease and have less and less children that are struggling with the disease of obesity, I think that this is a really great first step, especially for the state of Missouri,” she said.

According to the Centers for Disease Control and Prevention, health risks of childhood obesity can include:

The CDC also says that childhood obesity can have psychological effects, such as anxiety, depression and low self-esteem, as well as social problems like bullying.

Future health problems associated with childhood obesity include an increased risk of serious health conditions, such as heart disease, Type 2 diabetes and cancer.

Both obesity and disease risk factors are likely to be more severe if one has obesity in childhood, according to the CDC.

Benard works with Tigers on Track, an MU wellness clinic that specializes in helping children and families develop healthier habits.

When children come into the clinic, they meet with a medical provider, dietitian, physical therapist and social worker, Benard said.

“That just really aims to address lots of different components of what might go into a child carrying extra weight,” Benard said.

Benard said Tigers on Track sees a wide range of positive results. Some kids don’t lose any weight and some lose significant amounts, but most feel an improvement in their overall well-being, she said. For example, a lot of participants see an increase in exercise tolerance and healthy eating habits, like drinking more water or eating more fruits and vegetables.

The Columbia School District has several programs to help students eat healthier. The district provides reimbursable meals to students that Fullum says are “heavily regulated” by the Department of Agriculture. The meals must include certain components, including grains, meat or protein, fruits, vegetables and milk. For breakfast and lunch, student meals must contain at least three of these components but may also add more.

“We are required to look at saturated fat, fat, trans fat, sodium, overall calories,” Fullum said. “We are also required to have color in our menus. So, dark green and red orange vegetables and whole grains.”

“We still get some pushback,” she said.

For example, when it comes to bread, pasta and rice, students generally want white. The schools provide students with whole grains, and that takes some getting used to.

“We’ve gotten better with time because we’ve been doing these regulations for a long time now,” she said.

The biggest challenge students face to eating healthy can be access at home.

“They’re not in charge of their grocery purchasing typically, so if a family doesn’t have enough money or a family chooses not to purchase healthier foods — healthier foods cost more — that’s a challenge, not only for home, but for us,” Fullum said.

Fullum said no single entity can solve the problem of youth obesity.

“It’s going to have to be a district-wide effort which I feel like we’re starting to see more and more of.”

Benard said it is going to take work on all different levels, including at the statewide level.

“Statewide, just supporting policies that promote healthier eating, better food availability for everyone, including access to fruits and vegetables, would be a really really good step,” she said. “Trying to really get the message out about just healthier eating in general — not promoting things like soda or other sugar-sweetened beverages and making sure kids have safe places to play to promote physical activity are all things that the state could be doing to be helpful with this.”

On Thursday, Ivanka Trump asked attendees of a child care roundtable in Kansas City to share their struggles and the solutions they would like to see on a federal level.

Missouri Gov. Mike Parson, Sen. Roy Blunt and Health and Human Services Secretary Alex Azar were also in attendance. Azar said the administration will finish up the series of 10 roundtables in a couple of months and begin adding the information they’ve gathered into President Trump’s budget proposals.

“We need state and local feedback,” Ivanka Trump said. “We need to hear from parents and educators and students, about what more we can be doing. This local perspective very much informs all the work that we’re doing on a federal level.”

Ivanka Trump said child care is an undisputed working expense and that when parents can’t access care for their children, it has ramifications for the economy. Parson said that workforce development has been one of his priorities since taking office and that child care is linked to this.

“When we talk about workforce development, that also includes daycare,” Parson said. “We gotta have the resources we need for parents to be able to be in the workforce.”

Those resources, however, are a work in progress. Mona Martin, director of human resources at HM Dunn Aerosystems, said there is a lack of child care options for those working non-traditional hours, like overnight or weekend shifts.

Martin said this lack of options can force parents to leave their children with neighbors or partners, who may be unqualified to care for them. Jennifer Tidball, acting director of the Missouri Department of Social Services, said this can lead to dangerous consequences.

“We see children die, or children who are injured, because we have mothers who have went to work and made decisions to go to work, but they don’t have access to quality safe child care for their children,” Tidball said.

Those at the round table discussed the role employers can play in child care. Carolyn Watley, vice president of community engagement at CBIZ, said there are numerous strategies employers can utilize to help out working parents, including flexible scheduling, family leave and rooms for nursing mothers.

Watley said her company offers a child care referral service for employees to help them find the care that’s available.

“We have, at our company, a new parent advocate that really helps parents when they come back through those challenges,” Watley said. “One of the most important things we can do is help support those in our community that are providing child care.”

Blunt said that companies who provide child care for their employees may also see benefits themselves.

“If you’ve got a child care problem solved in a way that relates to your employment, a lot of things have to go bad at work before you decide to walk away from your biggest problem being solved,” Blunt said. “I think there are more and more companies that are beginning to figure out how they can contract to provide child care at a work place.”

“We’ve had people come and say, ‘Please don’t give me a raise, because if I take this 10-cent-an-hour raise, I can no longer qualify for child care assistance,’ and that breaks my heart,” Martin said. 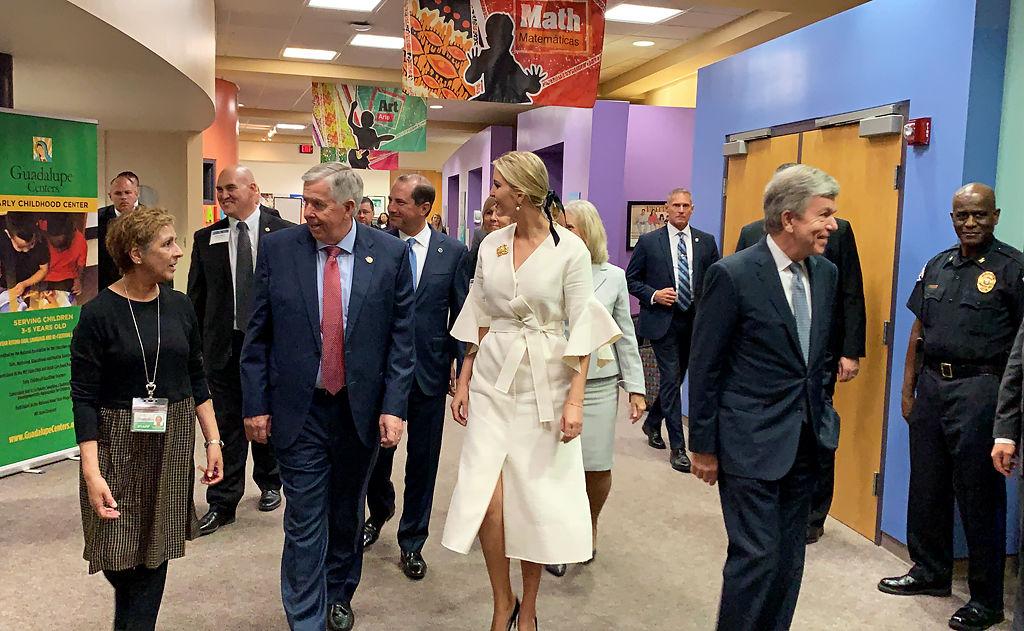 The commission was created in response to the results of the Public Health and Human Services Community Health Report that found black people in Boone County had significantly lower health outcomes than white people. The report showed that African Americans in Boone County had health disparities for stroke, hypertension, diabetes and cancer.

An AED is essential in a life-threatening cardiac event. If the heart’s rhythm is not correct, the device analyzes the heart’s rhythm and will deliver a shock to make the heart reconnect to its natural rhythm. AED’s boost the survival rate for sudden cardiac arrest from less than 5% to more than 40%, according to the National Safety Council. Most schools, public buildings, gyms and other public places have a device close by. However, they are not required or recommended by Missouri law.

According to Verna Laboy, health educator with the Health Department, none of the black churches in Boone County had an AED in the building. Laboy said this may be due to the high price tag associated with acquiring one. A single AED costs $1,500.

However, Laboy and Live Well by Faith are changing the black community’s access to AEDs in churches.

The commission has spent three years, since its inception, promoting healthy lifestyles that would improve overall health in the county. Additionally, Live Well by Faith has worked to create connections between the Health Department and black churches.

These connections have been used to address the health needs that are specific to each church receiving an AED, Laboy said.

The group has also placed “lifestyle coaches” in each church. The coaches are trained and educated in health education, evidence-based programs to promote healthy lifestyles and are given resources to run programs that are the most effective for each church.

The coaches have spent the past several months training at the Health Department in Columbia to receive their certification in CPR and AED usage. The coaches and members of Live Well by Faith took the new devices out of the box and set them up Thursday night, before taking them to the individual churches.

Laboy said the work is “groundbreaking” and expressed enthusiasm for the program that has shown to have high levels of success in promoting healthy lifestyles throughout the community.

Baker is not new to Missouri state politics. As a former state representative for the 19th district from 2005 to 2009, she says that “In the past, I have appealed across party lines because I am a solution seeker. I think people are ready for that.”

During her time in the House of Representatives, she served as a ranking member of the Budget, Health Care, and Education committees, according to her campaign website.

Baker is running because she believes that the district is hungry for new representation.

“The legislature is so often voting against our own people,” Baker says. “They have consistently tried to reverse already voted for ballot initiatives.”

Baker gave the example of House Bill 126, which outlawed any abortion past eight weeks, except in the case of a medical emergency, according to past Missourian reporting.

If nominated in the democratic primary to face Rowden, Baker says she will focus on four major priorities: health care, the environment, education and public safety.

The 19th District includes both Boone and Cooper counties. While she has strong connections and relationships in Boone county, Baker said she hopes to expand these into Cooper county in the next year.

In August of this year, Democrat Michela Skelton announced that she is also running for the seat. 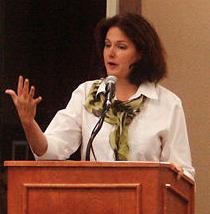