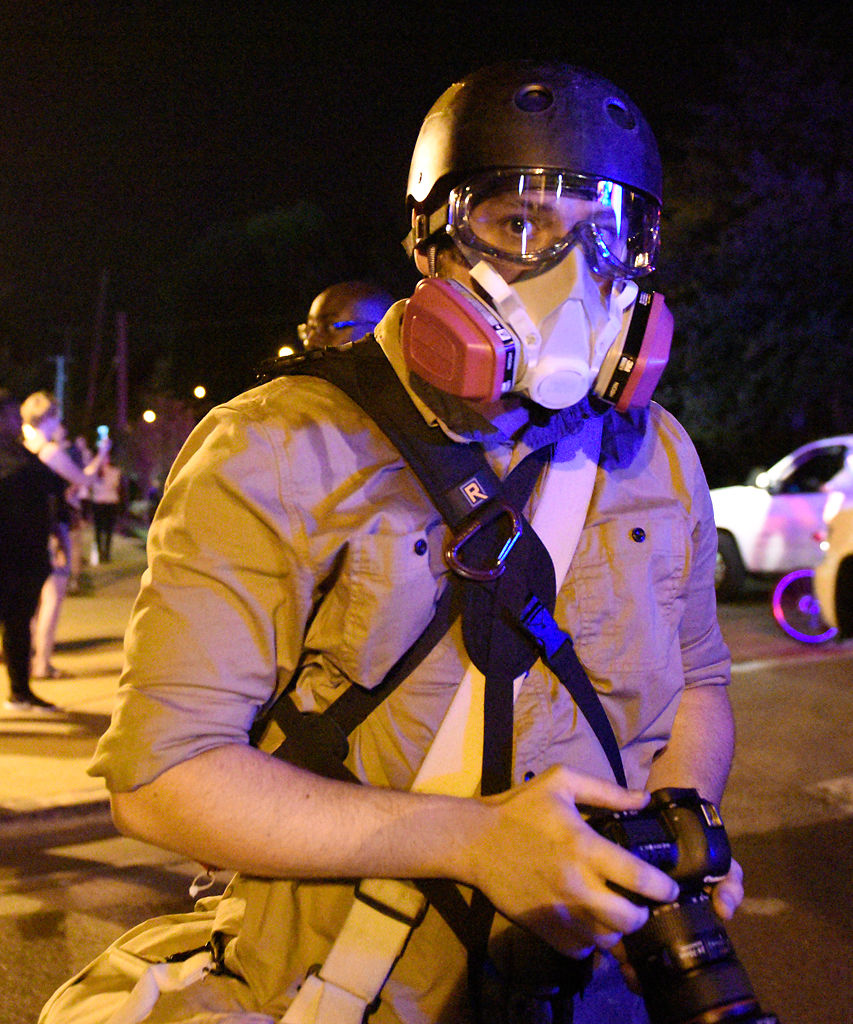 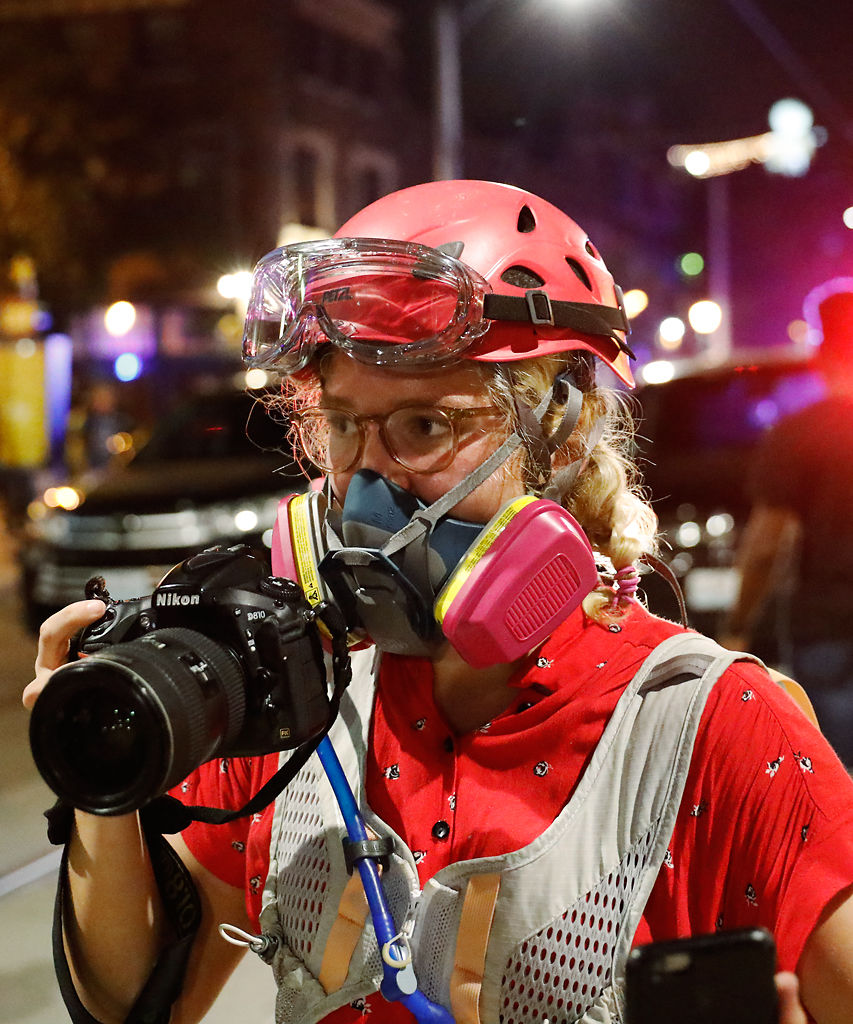 Davis Winborne is a Missouri photojournalism student who covered the protests of the Jason Stockley acquittal as a freelance journalist. In the following column, he recounts his experiences and opinions.

Last weekend, I covered the protests in St. Louis along with Ellie Cherryhomes, one of my fellow photojournalism students at MU, and several other press photographers and videographers from news outlets across the country.

People had gathered in the streets to protest the acquittal of police officer Jason Stockley, who fatally shot motorist Anthony Lamar Smith in 2011. As in Ferguson in 2014, the protests came from a community hurt by police killings. It’s important to note that for the vast majority of this past weekend, the protests were peaceful. Police, in turn, were relatively restrained in their behavior — until Sunday night.

The behavior of police, in particular SWAT teams and riot officers, toward the news media and other peaceful participants on Sunday ought to be alarming to the general public. The brutal treatment and jailing of St. Louis Post-Dispatch reporter Mike Faulk has already received national attention. The American Civil Liberties Union has sued the St. Louis Metropolitan Police Department, calling its actions on Sunday “unlawful and unconstitutional.” Our experience serves as further evidence that the actions of the St. Louis police against journalists were completely inappropriate. We were there to cover an important story, and the actions of the police were a direct attack on that constitutionally protected work.

On Sunday, my third night covering the protests, I arrived outside the St. Louis Police headquarters at about 7 p.m. The day’s largely peaceful demonstration was beginning to disintegrate. I joined up with a group of photojournalists who were moving along with the demonstrators.

We carried cameras and equipment, and most of us were wearing quite visible press badges. Because of the danger and the speed at which the crowd moved, all of us (probably a dozen in total) stayed within arm’s reach of each other during the night.

We ran alongside the crowd in downtown St. Louis as they moved through the streets. Most of the peaceful protesters had gone home, and now some of those who remained were using broken cement planters to destroy windows, cars and storefronts. The police were nowhere to be seen for about 20 minutes. Suddenly, as we rounded a corner, dozens of police officers emerged from cars and began chasing the crowd, firing bean-bag shotguns into the mass of people.

Along with the demonstrators, we ran back down an alley, and the police disappeared. Not long after that, we heard an engine rev, and an unmarked Jeep Patriot drove straight through the crowd of media and demonstrators. Everyone managed to dive out of the way in time. At first we thought it was an attack, like the one in Charlottesville, Virginia, that ended in the death of Heather Heyer. But the SUV’s windows were rolled down, and we could see police officers inside. They pepper-sprayed the crowd from inside the vehicle, then made another pass through the crowd at around 30 miles per hour and disappeared.

At that point, the journalists and demonstrators had been effectively corralled into an intersection. No police were present, so everyone stopped to take stock of the situation. While we were regrouping, police quickly blocked off all possible exits, and an armored truck with the letters SWAT on the side sped around a corner. As they passed us, a door on the side of the truck opened, and the officers inside shot the crowd of people — now roughly half news media and half demonstrators — with guns filled with pepper spray paintballs. I was hit twice, as were several other journalists in our group.

The SWAT truck stopped, and heavily armored officers carrying assault rifles poured out, screaming at us. Thinking that they would likely ignore the journalists and go after the demonstrators, we stopped and put our hands and cameras in the air. Most of the demonstrators were wearing black, their faces covered with bandanas, and some had weapons. The journalists, on the other hand, were dressed the way we often are — in button-down shirts, with press credentials and cameras plain to see. The difference was obvious.

And yet most of the demonstrators escaped while nearly all of the SWAT officers grabbed the journalists by our necks and forced us against a brick wall. An officer pulled my respirator off my face and threw it into the street and then pulled my helmet back so tightly that the fastened strap began to cut off my air supply. Our hands were immediately zip-tied tightly behind our backs, and I was unable to breathe or remove my helmet. I tried in vain to choke out the words — “I can’t breathe.” A photographer next to me noticed and loudly said to an officer behind us, “You need to take off his helmet, he’s choking.” The officer looked at him, then at me, and said “I can’t hear you” and walked away.

I was eventually able to use the wall next to me to nudge my helmet back onto my head. Now able to speak, I turned to the officer in charge and asked, “Am I under arrest?” His reply was: “Shut up, mother------.”

The SWAT officers then yanked us onto our feet and walked us toward a police van. As we were being shoved into the van, the officer in charge stopped us. “All of you dumbasses are going to jail tonight. Stupid mother-------.” Then he turned to one of the other officers and said: “Throw these stupid b------ on the van.”

We were locked into the van with the lights off for about 30 minutes. Finally, the door opened, and several demonstrators were put on the van with us. They also had their hands zip-tied behind their backs. As we sat together in the crowded space for the next 15 minutes, the demonstrators grew increasingly angry as they realized we were the ones who had been taking photographs of them destroying property.

The demonstrators began to stand up and walk around the bus, threatening us. Just as I felt the situation on the van was becoming too dangerous, the door of the van opened and a different police officer pulled all of the journalists off the van. I have been told that a freelance photographer still outside the van persuaded the officers that we were journalists and ought to be released.

When we came off the bus, the SWAT team was gone, and a police officer informed us we wouldn’t be arrested. He apologized and escorted us away from the blockaded intersection, where police were still busily interrogating handcuffed journalists.

It is important that journalists be allowed to do their job. It is our responsibility to bear witness to newsworthy events. When police ignore the people who are smashing windows and destroying property in order to focus on handcuffing and berating journalists, it impedes our ability to show the world what is happening.

As journalists, we expect the police to recognize the right we have to document unfolding events in order to truthfully inform the public. Instead of being able to do our job, our physical integrity was at risk because of the police.

We gained valuable insight to what it feels like to not be protected by those whose purpose is to create safe communities, a feeling that is all too common for many people of color in the United States. As white journalists, we have significant privilege in our society that has spared us from directly facing racial discrimination from police officers. While photographing, we caught a glimpse of the fear of unpredictable policing that people of color have experienced for far too long.

Ellie Cherryhomes contributed to this report.

Guilty until proven otherwise; that’s our motto, especially if we suspect you of being an "urban heroin dealer."

Missouri legislators should discuss Lincoln and Douglass together

Words will fill a void