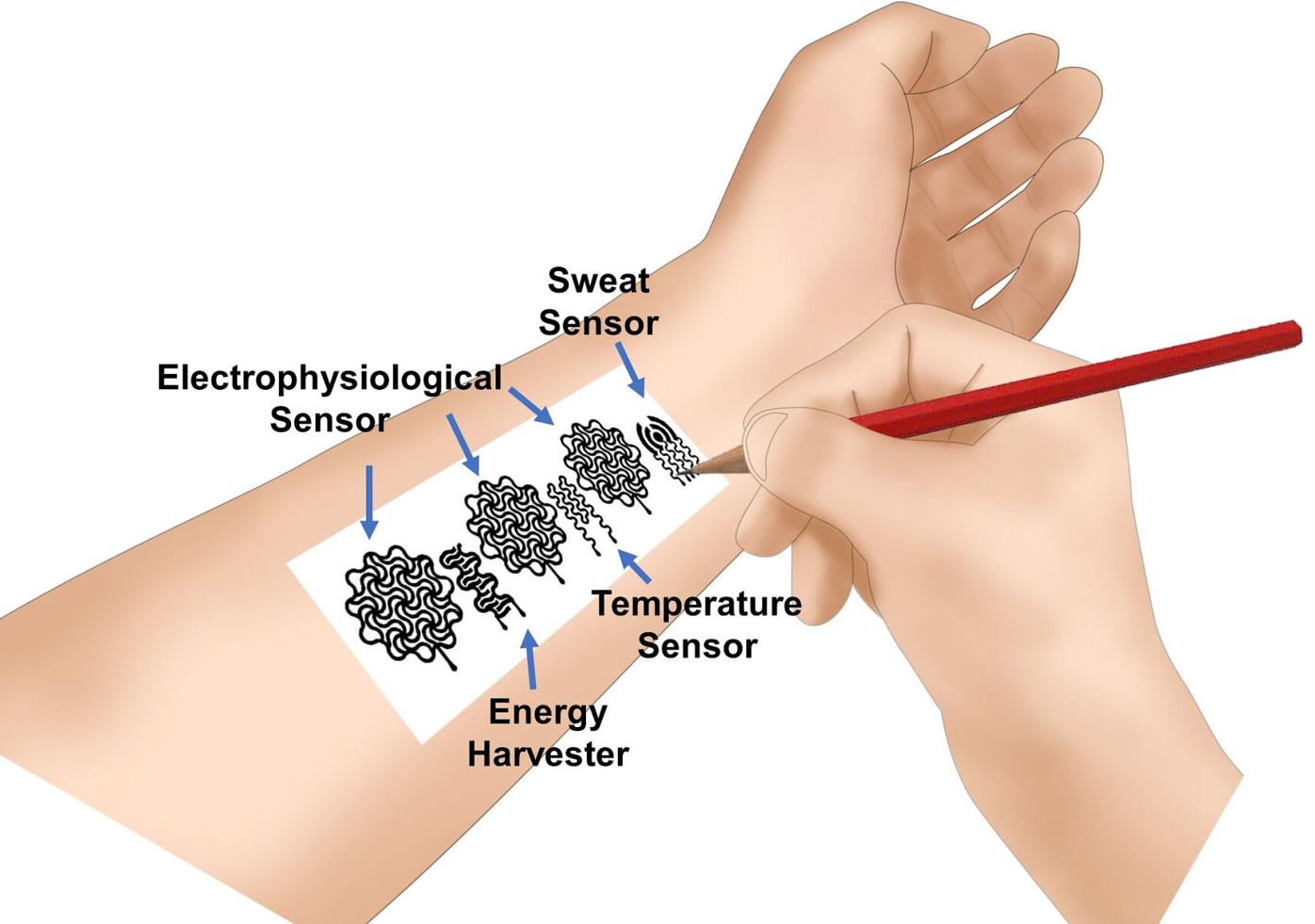 This drawing shows how electronic skin can be applied to the forearm. Patterns can be drawn with a pencil and help track heart rate, respiration and body temperature.

Sensors of varying types are able to capture data from an electronic skin device. 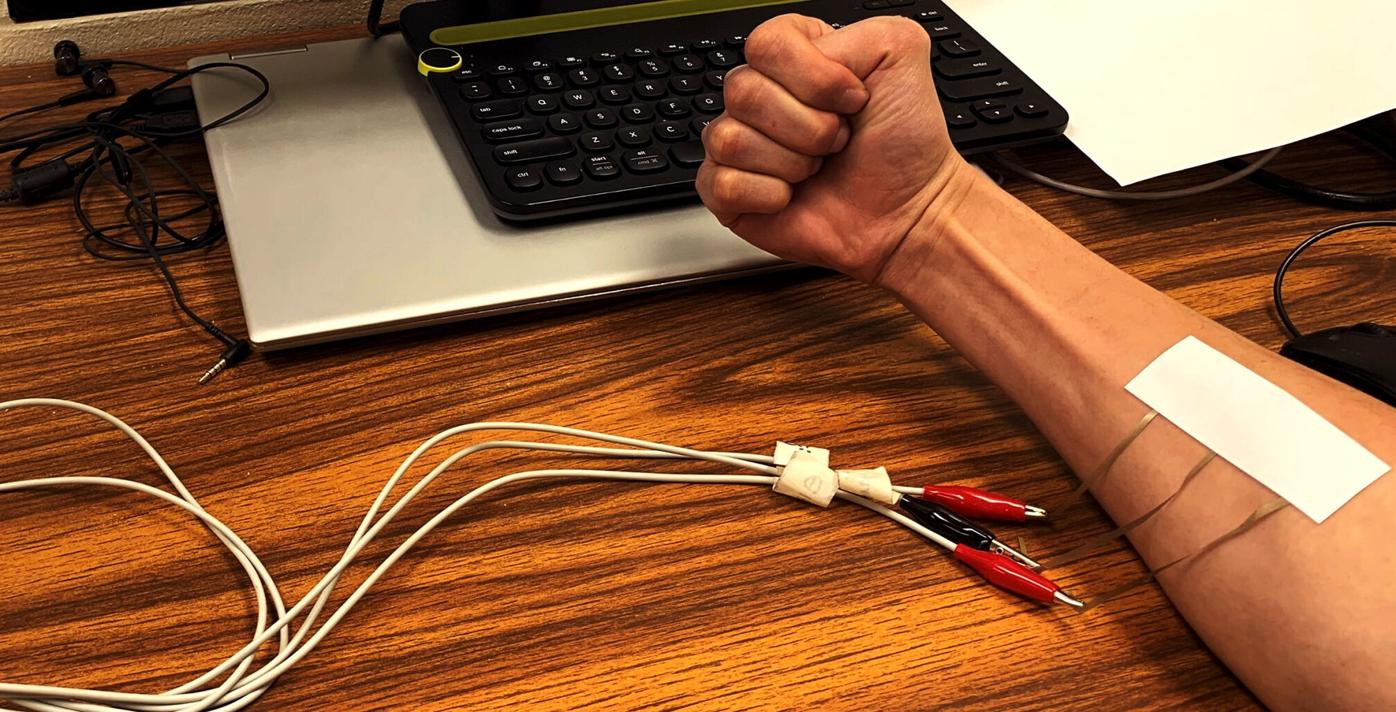 An electronic skin device is demonstrated on a forearm. MU researchers have found that a pencil and ordinary paper can mimic human skin.

This drawing shows how electronic skin can be applied to the forearm. Patterns can be drawn with a pencil and help track heart rate, respiration and body temperature.

Sensors of varying types are able to capture data from an electronic skin device.

An electronic skin device is demonstrated on a forearm. MU researchers have found that a pencil and ordinary paper can mimic human skin.

In a new study, MU engineers have found that a pencil and ordinary paper can be used as an inexpensive, disposable electronic skin device to track vital signs such as heart rate, respiration and body temperature.

Electronic skin refers to a thin, flexible device that can mimic the functions of human skin by responding to factors such as heat and pressure.

Historically, expensive plastic and silicone were used as the base for the device, with patterns printed on the base that serve as conductors. The patterns resemble grids and other graphic designs.

MU researchers achieved a breakthrough when they found that using a pencil to draw the patterns on cheap paper could achieve comparable results.

The devices have been used as sweat and thermal sensors, as well as drug-delivery systems, particularly in personal health care and in places with limited medical resources.

But it wasn’t until MU researcher Yadon Xu accidentally used a pencil to draw tracking patterns on paper that a less-costly alternative was discovered.

Xu, a PhD student at MU, made his discovery during a lab experiment. He recognized that graphite’s high electrical conductivity could be easily transferred to paper in a drawing that could track a broad spectrum of vital physiological signs from the human body.

Existing commercial on-skin biomedical devices typically contain two major elements — the tracking component and the flexible, stretchable material such as plastic or silicone as a base.

The material provides support so the tracking component can maintain a connection with a person’s body, according to Zheng Yan, an assistant professor in the College of Engineering at MU WHO.

“The conventional approach for developing an on-skin biomedical electronic device is usually complex and often expensive to produce,” Yan said. “In contrast, our approach is low-cost and very simple.”

The researchers found that pencils containing more than 90% graphite are able to conduct a high amount of electrical energy. The electrical conductivity of a pencil drawing on paper makes it well suited for on-skin electronic devices, he said.

Due to paper’s poor stretchability, however, the MU study had to work with kirigami patterns to cut shapes to fit the shape of the body. The shapes are then coated with a substance to apply them to the skin.

“Commonly used paper is not naturally sticky,” Xu said. “To overcome this, we spray-coat Silbione, which improves the stickiness on bare regions of the skin.”

Silbione is a type of medical grade silicone used in health care applications. Designed for high strength molded parts, Silbione comes in liquid form that adheres paper to the skin, which can then remain there for days.

The researchers said their discovery could have broad future applications in home-based, personalized health care, education and remote scientific research, even during the COVID-19 pandemic.

“For example, if a person has a sleep issue, we could draw a biomedical device that could help monitor that person’s sleep levels,” Yan said. “The low-cost, easily customizable approach could also allow scientists to conduct research at home, such as during a pandemic.”

Yan said the group’s next step would be to further develop and test the use of the biomedical components, including electrophysiological, temperature and biochemical sensors.

Pencil-and-paper on-skin technology can also facilitate an understanding of someone’s evolving physiological state and stress levels, according to a journal article published in Proceedings of the National Academy of Sciences.

An electrocardiogram, or ECG, is a test that measures the electrical activity of the heartbeat. Electrophysiological sensors can be directly drawn with a pencil on commercial adhesive paper without needing Silbione, only furthering the development of the process.

During one test, for example, subjects were asked to close their eyes, then open and maintain a dreamy state unaware of their surroundings, and then, finally, do a complex math calculation.

Each mental state was maintained for 90 seconds with a five-minute break in between. The EEG signals revealed intense high-frequency cerebral activities during the math calculations and low frequency during the closed and dream like state tests.