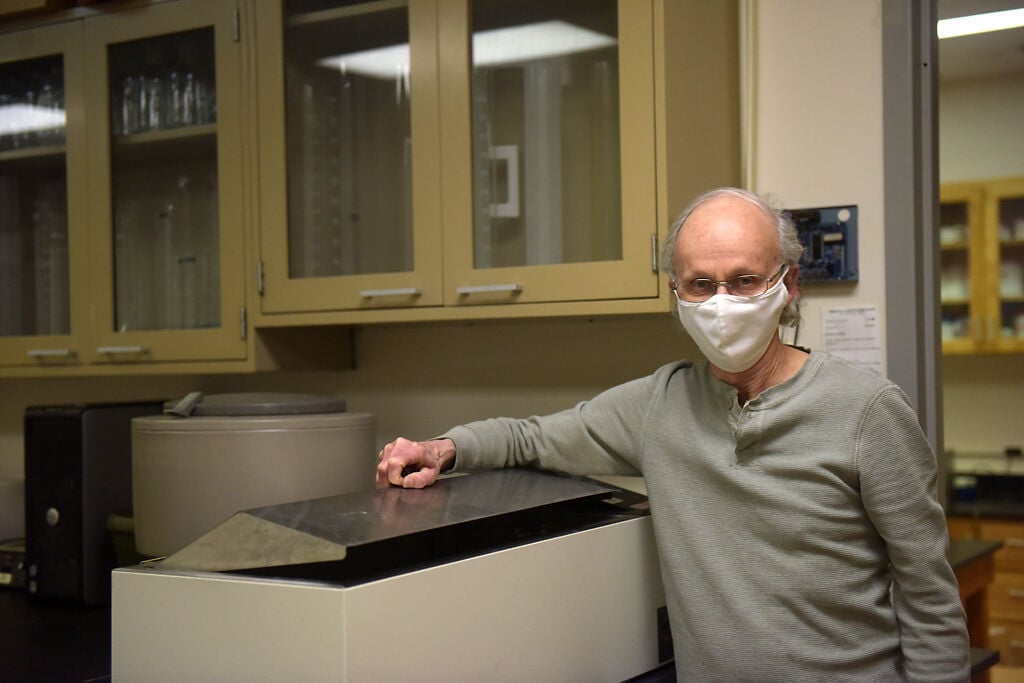 Frank Booth is a professor in the MU College of Veterinary Medicine. Booth and his research team recently discovered that a lack of presence of the protein kinase inhibitor alpha gene correlates to physical inactivity in rats. Booth started his research after pondering whether it’s possible to limit infirmity and inactivity in old age. 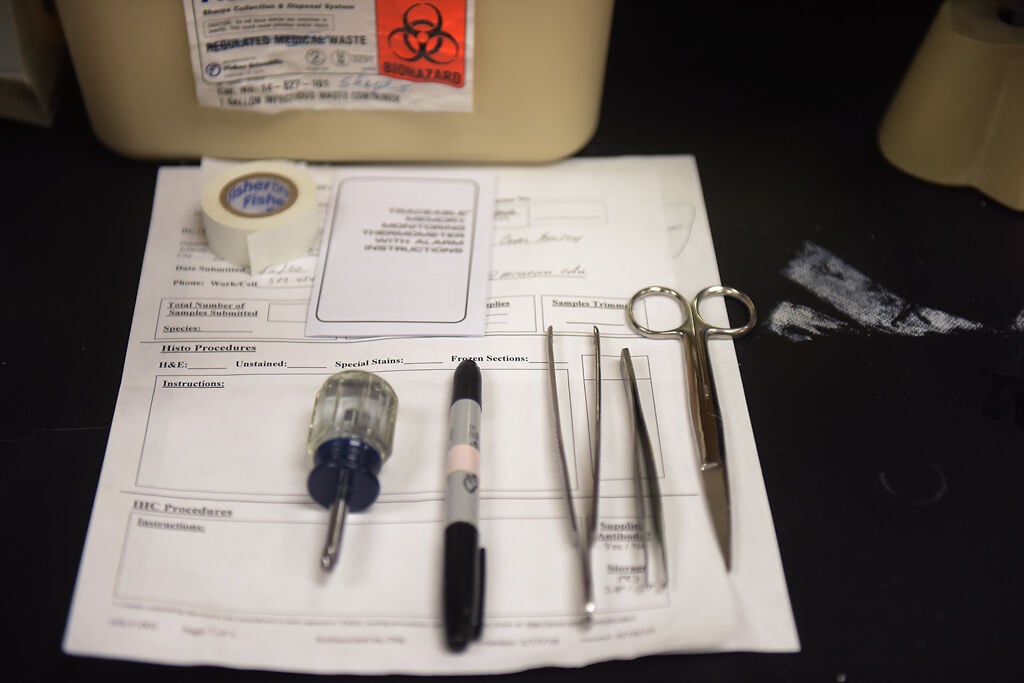 Tools sit in University of Missouri professor Frank Booth’s lab on Nov. 20 in Columbia. Booth researches genes’ relations to physical inactivity in the hopes of finding ways to help people are more active.

Frank Booth is a professor in the MU College of Veterinary Medicine. Booth and his research team recently discovered that a lack of presence of the protein kinase inhibitor alpha gene correlates to physical inactivity in rats. Booth started his research after pondering whether it’s possible to limit infirmity and inactivity in old age.

Tools sit in University of Missouri professor Frank Booth’s lab on Nov. 20 in Columbia. Booth researches genes’ relations to physical inactivity in the hopes of finding ways to help people are more active.

Frank Booth vividly remembers his visits to the nursing home where his mother was living.

Every time he stepped off the elevator, five women in wheelchairs were lined up and staring blankly at him.

Booth began to wonder whether there might be a way to prevent older adults from ending up that way. According to the Centers for Disease Control and Prevention, 1.3 million Americans spend their final years in nursing homes.

“The last years of life are supposed to be the best,” said Booth, an MU professor in the Department of Biomedical Sciences. “Why can’t we have Grandma play with her grandkids?”

He started to speculate whether genes might be the cause of physical inactivity, which is a predictor of infirmity in old age. One way to prove that, he decided, would be to selectively breed animals that didn’t like to run.

Five years after he started his research, Booth did discover a gene that was significantly deficient in rats he selectively bred to be lazy.

He found that a deficiency of the protein kinase inhibitor alpha gene in rats was directly related to physical inactivity or laziness. With an intervention, he thought he might be able to recover a desire in rats to run.

His breakthrough wouldn’t have been possible if he hadn’t taken several important steps along the way.

To tackle the problem of low voluntary activity among the aging population, Booth needed to investigate what inhibits people from getting off the couch.

A paper in a peer-reviewed scientific journal called Cell gave him a clue. Researchers had identified the genes that boost running endurance in mice when treated with pathway-specific drugs.

Booth immediately wanted to determine if he could produce animals that didn’t like to run to learn whether physical inactivity is heritable.

At the time, researchers were heading in a different direction, studying the effects of increased exercise on disease. That implicitly assumes that exercise causes disease, Booth said.

“You have to have a low-activity model to associate it with causes of disease,” he added.

A professor in North Carolina observed that Booth was taking a radically different approach, and they partnered to study physical inactivity for three years.

“Booth’s argument was that the question we should be asking is what happens when we aren’t active,” said Espen Spangenburg, an associate professor of physiology at the East Carolina Obesity and Diabetes Institute.

In their research, the control group was physically active and the experimental group was inactive.

“That was a different way of thinking,” Spangenburg said. “He basically flipped the paradigm completely.”

In 2011, an MU study conducted by John Thyfault, an assistant professor in the MU Department of Nutrition and Exercise Physiology and Internal Medicine, had found that healthy individuals who cut their physical activity in half for three consecutive days saw their postprandial glucose responses double.

These are the spikes in blood sugar that occur after meals. High levels of PPG in individuals is considered a risk factor for both Type 2 diabetes and cardiovascular disease.

Another study had discovered that physical inactivity was also linked to colon cancer. A study called “Television Viewing and Time Spent Sedentary in relation to Cancer Risk: A Meta-Analysis” discovered that an increase of two hours of sedentary time per day was associated with a statistically significant 8% increase in colon cancer risk.

Booth started his experiment in early 2009 by measuring the running distance of 80 female and 80 male domesticated rats. Each rat was placed in a cage that contained a silver, stainless-steel running wheel, along with a small bicycle computer clipped to the edge that measured running distance.

Because rats are nocturnal, they would do all their running at night. His hypothesis was that a gene was related to the amount of voluntary running in the wheel.

Over the course of a week, Booth recorded the distance each rat had run each day. After he gathered the data, he selected the 13 female and 13 male rats with the lowest running distances. This group would serve as the founder population for the experiment.

After mating the 26 rats, Booth worked with the litters, this time selecting two female and two male rats with the lowest running distance. They were considered the first generation.

He continued this selection process until he found rats with almost no willingness to run. It took two years and six generations for him to find rats running significantly less than those in the initial group.

An additional year and a half elapsed before he identified rats in the 10th generation of offspring that almost never ran voluntarily.

By producing rats that didn’t like to run, Booth could prove that genes played a role in the level of physical inactivity in rats.

He took small pieces of the brain and measured specific molecules to see if they had any effect on running. This meticulous process led to the discovery that the rats in the experimental group had much lower levels of the protein kinase alpha inhibitor gene.

The day he made his breakthrough, Booth said he wasn’t in a particularly celebratory mood. There was still a lot of work to be done.

“It’s a small step forward,” he said. “All the steps in between are very satisfying, but the big problem still exists.”

Nevertheless, Booth recognizes the importance of achieving these minor victories.

“It’s a self-satisfaction that carries over to the bad times,” he said. “It gives you the confidence to keep going.”

What also gives him confidence that he’s on the right track are studies in the United Kingdom that also found the role of genetics in physical activity levels.

One of those researchers is Ruth Loos, director of the Genetics of Obesity and Related Metabolic Traits Program at the Icahn School of Medicine at Mount Sinai in New York City.

They asked the twins to wear an accelerometer on their chest for a week to measures both heart rate and movement. After compiling the data, the researchers discovered differences between identical and nonidentical twins.

The major finding here was that 47% of the variation in physical activity energy expenditure could be attributed to genetics.

Loos recognizes the potential implications of identifying the genes that cause physical inactivity.

“By knowing the genes that determine physical activity, we can gain insight in the biology that drives some people to be more active than others,” Loos said. “This new knowledge can help us design better interventions that encourage people to move more.”

He also is searching for the pathway to the protein kinase alpha inhibitor gene.

“If you are going to replace a gene, you have to determine the best pathway for gene therapy,” he said.

Booth believes his research could have a profound impact on the well-being of society.

“If we can identify the gene putting you in the wheelchair and block it with some kind of drug or gene therapy, we can make the end of life more enjoyable,” he said.

Spangenburg goes one step further: “His research is getting us to prevent Wall-E from happening.”

The link between insomnia and alcohol consumption gets a fresh look