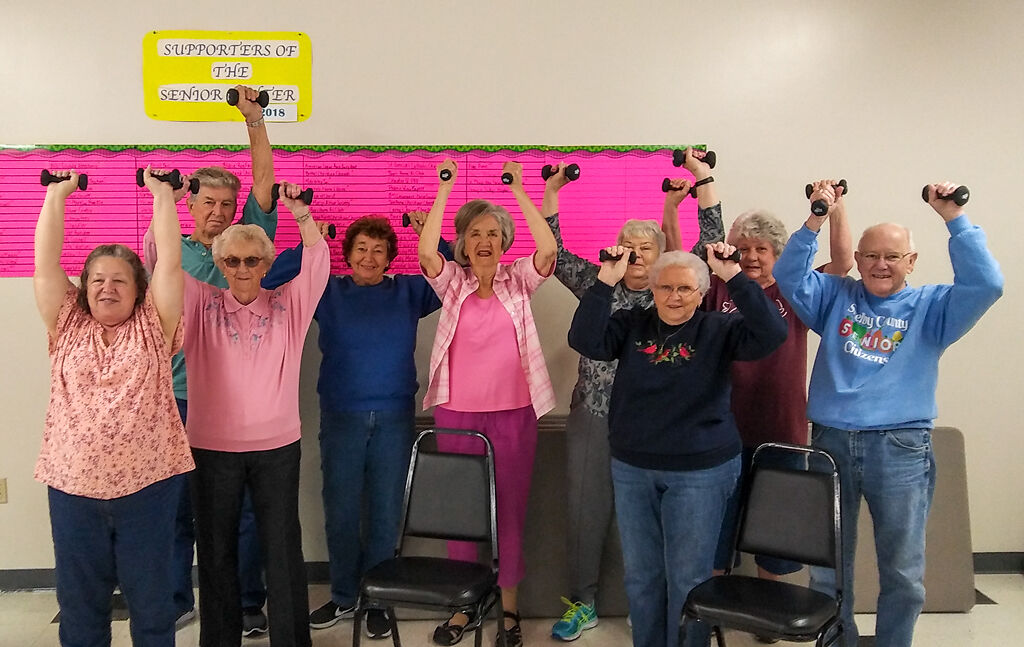 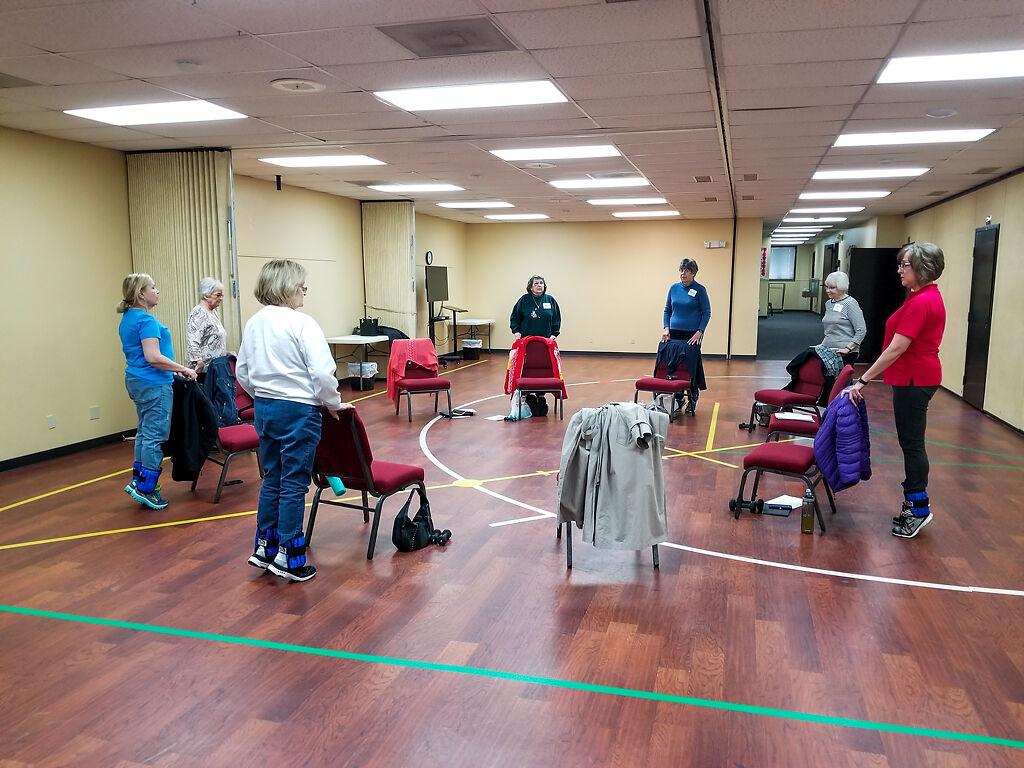 An instructor meets with a class for an exercise session called Stay Strong, Stay Healthy designed to improve fitness in older adults.

An instructor meets with a class for an exercise session called Stay Strong, Stay Healthy designed to improve fitness in older adults.

In June, Brianna Markway received a text alert. A woman in her 70s who had been part of a health study under Markway collapsed on her living room floor.

Markway watched a video of the accident caught on a home monitor, then acted swiftly.

The woman had suffered a stroke, but because of Markway’s quick intervention, emergency responders were able to give her medical attention just in time.

“It turned out she had a brain hemorrhage,” Markway said. “[Doctors were able] to remove the clots in her brain and actually save her life.”

The woman is expected to make a full recovery without any paralysis, slurred speech or other long-term effects, Markway said.

If she hadn’t received an alert, the outcome would likely have been very different.

As part of a project that tries to avert serious falls, the woman had participated in the Intelligent Health Sensor Research initiative through the MU Center for Center for Eldercare & Rehabilitation Technology.

Markway, the project coordinator and a staff member of the MU College of Engineering, has been recruiting older residents since early 2019 to study fall risk and other health changes.

Her research team installed a depth-sensing monitor in the woman’s apartment earlier this year to track vitals such as sleep quality, respiration and heart rate. The technology also has the monitoring system that alerted Markway when the woman fell.

Fear of falling is a growing concern among adults over 65 that can result in social isolation, depression and a feeling of helplessness.

Falling is the leading cause of both fatal and non-fatal injuries in that age group and results in more than 800,000 hospitalizations and 27,000 deaths annually, according to the National Council on Aging. One-in-four Americans over 65 will fall each year.

A 2017 study in American Family Physician reported that 25% of all falls lead to serious physical injury. Common risk factors include environmental hazards, complications with the cardiac system, poor balance and metabolism, a deteriorating musculoskeletal system and the amount of medication one takes regularly.

MU exercise physiologist Stephen Sayers recently completed a study that examined the effects of lightweight, fast-mobility weightlifting on patients over the age of 65.

Sayers’ research was done in two pilot studies; he and his colleagues did one in 2019 and the second a year later.

Over a 12-week period, Sayers trained with a “high-speed” group — lighter weights and faster repetitions — and a traditional strength group. Each group performed the same full-body exercise programs but Sayers emphasized lower-body workouts.

To measure fall prevention, his team strapped participants to a rope system and allowed them to drop forward and then arch a leg to prevent a fall. The researchers observed how quickly the subjects responded to the fall and how far their foot moved, said Trent Guess, Sayers’ research partner.

The research team measured the actions through motion capture and voltage sensors that measure muscle activation, said Guess, an MU associate professor in the departments of Physical Therapy and Orthopaedic Surgery.

The study produced remarkable results. Participants who performed the high-speed training reacted 25% faster than the opposite group, and their legs reached out 25% farther as well. The result is especially important to help combat obstacles that come with aging, Sayers said.

“We get slower as we get older,” he said. “So the faster we can make our muscles, the better able [older adults are] going to be able to step forward and prevent a fall in case of a stumble, or even get across a busy intersection quickly.

“We don’t think about speed as being important for older people. We think about that with athletes. But I kind of train my older adults like athletes — trying to get them faster and more powerful.”

Furthermore, cardiovascular disease is a major concern for the older population, Sayers said. The study also found that blood pressure was anywhere from 5% to 15% lower in the high-speed group, a factor in the development of heart disease.

Simple actions such as crossing a street or driving can be dangerous for older people because they may not have sufficient strength, Sayers noted. Regular weight training enables them to confidently maneuver through their daily lives with a lower risk of injury.

The mission is to take results from university research — such as Sayers’ pilot study — and apply them for practical initiatives to benefit adults.

“Stay Strong, Stay Healthy” has managed to reach 15,000 Missouri residents and expand its program to five states, according to Stephen Ball, an MU exercise and nutrition physiologist.

Exercise choices and duration are catered so participants can maximize benefits in the shortest amount of time, Ball said.

In addition, prior studies with “Stay Strong, Stay Healthy” found that its outcomes positively correlated to reduction in fall risk, extending life longevity and improving overall quality of life.

For older adults, a hip fracture after a fall results in a similar mortality rate as those with breast cancer, said Ball, who is also professor with MU Extension. He uses this comparison when teaching his undergraduate students who may overlook this risk factor.

“Falls can be a very serious life-altering and life-ending — in some cases — event,” Ball said, noting that surgery doesn’t always result in full recovery for older people.

The program has become not just a routine for many but also a community, he said. Exercise can sometimes feel intimidating when someone first begins, and “Stay Strong, Stay Healthy” is meant to be an accessible and educational introduction for those wishing to integrate more physical activity into their life.

“That’s one of the most important things I think that we have found,” Ball said, “having the social component of the program as a way, not only to recruit, but also to keep [people] involved. So this might be the only time in the week that they have some interaction with others.”

“Stay Strong, Stay Healthy” is an eight-week program with 60-minute weekly classes, taught both in-person and online — although classes have been primarily online during the pandemic. The program costs $50 per eight-week session.

Skubic, who is with the College of Engineering at MU, and her colleagues have experimented with infrared detectors and even Microsoft Xbox Kinects to monitor residential activity.

Skubic’s studies and research over the years have been fruitful in assessing fall risk. They have resulted in a correlation of in-home average walking speed and fall risk.

According to Skubic, when someone’s average walk speed decreases by 5 centimeters per second over a week, they are 86% more likely to fall in the next three weeks.

She has conducted research with tenants of Tiger Place, a Columbia apartment complex designed for elderly living, as well as within the wider community.

Markway has worked with Skubic on the sensor research project since January 2019. Sensors are set up in a resident’s primary living space and under their bed. Devices include a motion sensor and a depth sensor that perceives an environment’s three-dimensional space.

If a fall does occur, Markway and the research team get a message tagged with a priority level: low, medium, high or super.

The system isn’t perfect, Markway said. Monitors only capture footage from a single angle, which can result in blind spots and undetected falls from someone’s bathroom or bedroom. Additionally, an active pet or a blanket thrown on the ground can result in false alarms.

“We’ve had one resident in an assisted living facility fall behind her couch,” Markway said. “It wasn’t captured because her couch was covering the view of the floor.”

She encourages those in the study not to rely on the monitor as a life alert.

Residents around Columbia have agreed to be monitored for Skubic’s research since January 2020, although the pandemic has made it a challenge to recruit people in apartment complexes where public access isn’t allowed. Markway wants to recruit at least 40 older Columbia residents — the project currently has 25.

The Intelligent Health Sensor Research project monitors participants for 12 months, though it is understandable if someone cannot commit to the full duration, Markway said.

Those interested in joining the study can contact her reach her via email at markwayb@missouri.edu, or by phone, 719-568-0233.