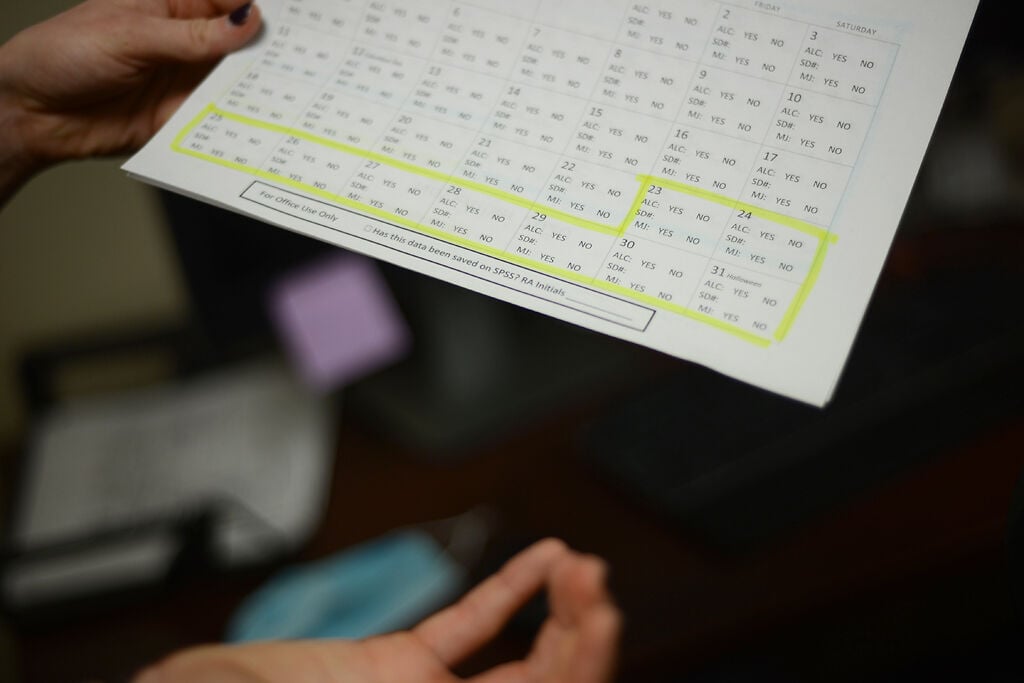 A researcher holds an alcohol tracker at the Missouri Psychiatric Center. Patients fill out the calendar to keep track of their alcohol consumption throughout the study’s course. 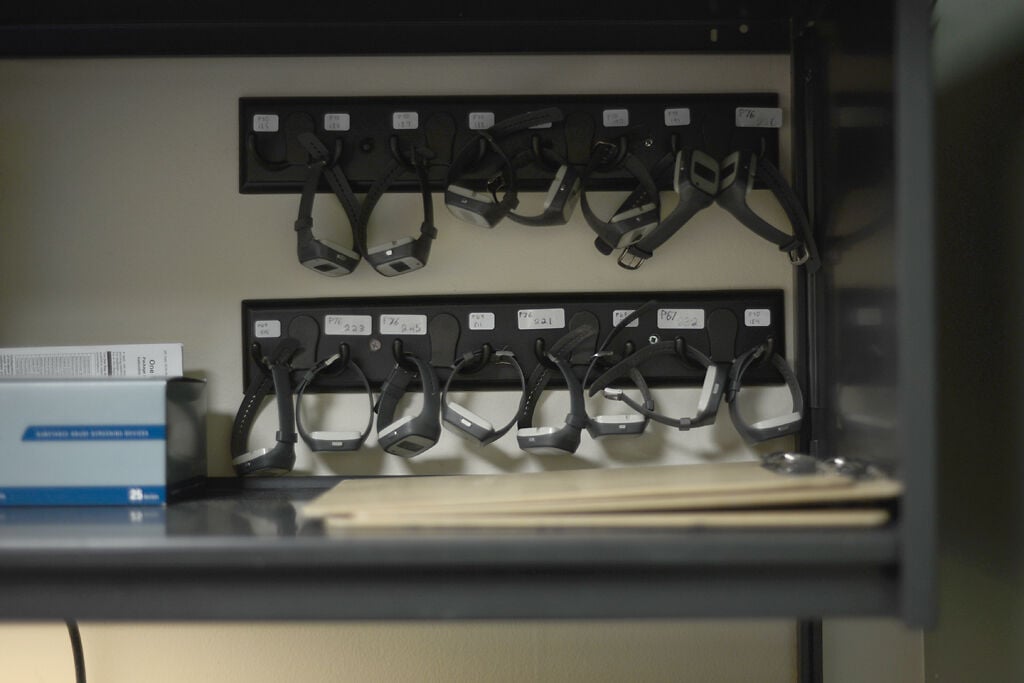 A set of sleep monitoring wristbands hang from their designated hooks on at the Missouri Psychiatric Center in Columbia. Participants in the study wore the bands to get an accurate reading of their sleep quality. 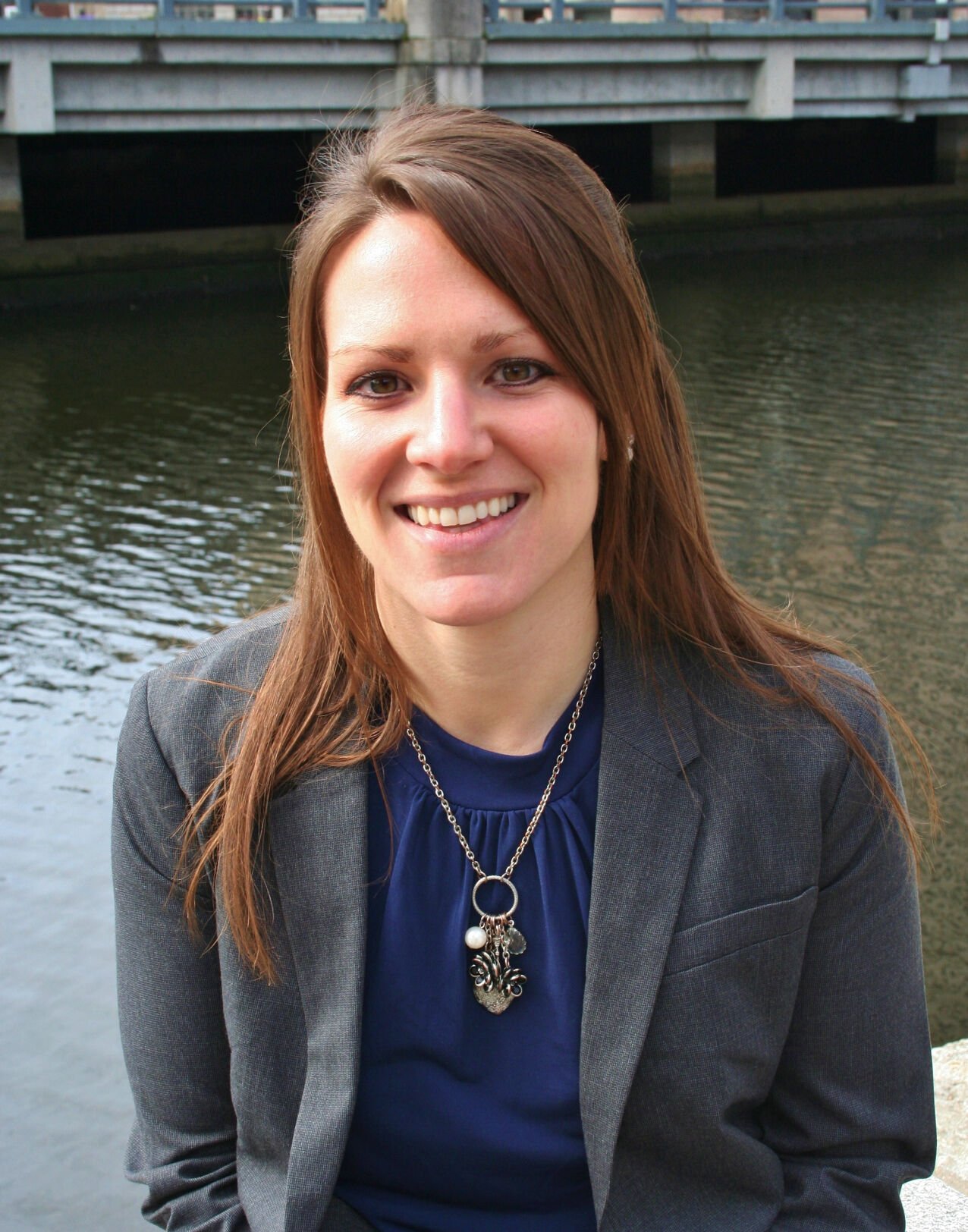 A researcher holds an alcohol tracker at the Missouri Psychiatric Center. Patients fill out the calendar to keep track of their alcohol consumption throughout the study’s course.

A set of sleep monitoring wristbands hang from their designated hooks on at the Missouri Psychiatric Center in Columbia. Participants in the study wore the bands to get an accurate reading of their sleep quality.

It was her first experience working with patients who have chronic relapsing alcohol and other substance use disorders. In conversations with the patients, sleep was mentioned frequently.

“They talked about it in a way as if it were more important than their substance use disorder,” said Miller, MU assistant professor and clinical psychologist in the Department of Psychiatry. “That really triggered my interest.”

She began looking at the data to see if there was a connection between drinking and sleep. What she found was a lot of research showing that drinking alcohol impacts sleep. There was not as much research indicating the opposite, which gave her a new direction.

It prompted her to ask: “If we treat the sleep, does that lead to fewer alcohol problems?”

A 2015 study had found that trouble falling asleep positively predicted alcohol-related interpersonal problems. The National Longitudinal Study of Adolescent Health looked at three waves of data from 1994 until 2002 among 6,504 adolescents.

Also, a review of 13 studies of 3,173 alcohol-dependent patients found that approximately 58% of them had insomnia.

While investigating the connection between drinking and sleep, she noticed that less sleep or lower-quality sleep seemed to affect the number of problems people reported as a result of drinking.

In July 2017, Miller came to MU determined to answer that question by focusing on young adults who engage in drinking behavior that can lead to long-term consequences. She wondered if there was a way to reduce the problem without telling people they could never drink again.

“You try telling a young adult they can never drink again,” Miller said. “It’s not feasible for a lot of people.”

She believed insomnia treatment would be more appealing to those who suffer from addiction.

“A lot of people don’t want substance use treatment because it’s highly stigmatized,” Miller said. “Offering people a different avenue for treatment that is less stigmatized could be really impactful.”

A public survey conducted by the Substance Abuse and Mental Health Services Administration in 2014 found that 10% of respondents reported that they did not seek care for their substance use disorder because it might cause neighbors or the community to have a negative opinion of them. 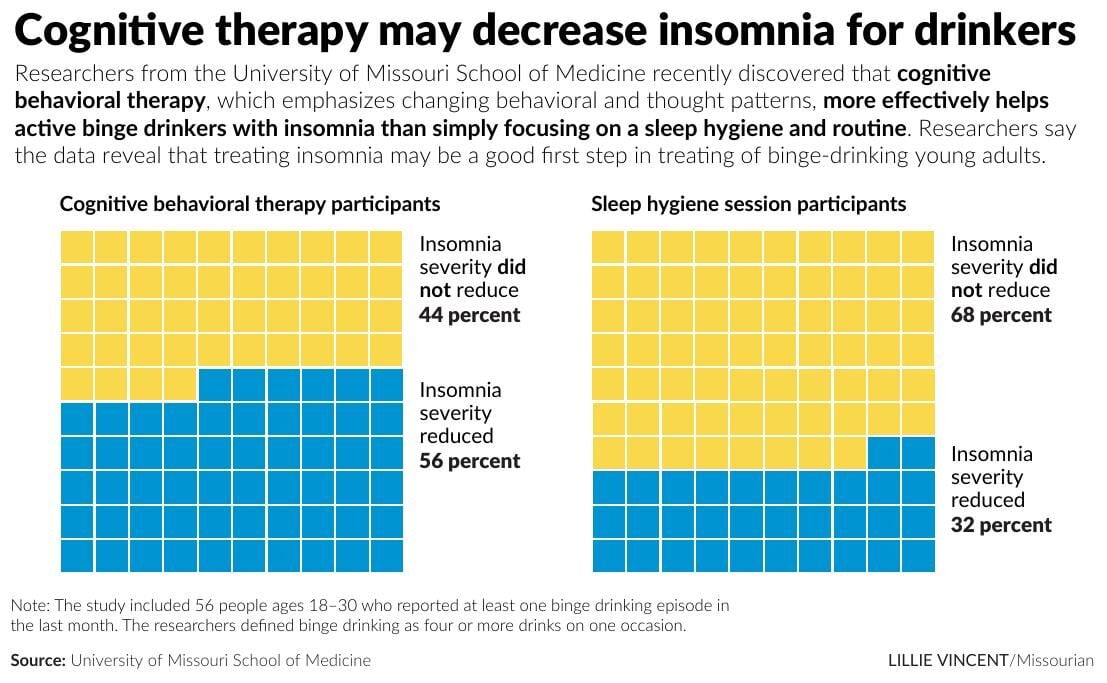 Miller conducted a pilot study in 2018 that looked at the effectiveness of cognitive behavioral therapy in treating insomnia for binge drinkers and whether that treatment reduced the number of alcohol-related issues they experienced.

She completed her study two years later and discovered that improvements in insomnia were associated with a reduction in alcohol-related problems.

Christina McCrae, director of the Mizzou Sleep Research Lab, began collaborating with Miller in 2017 before she came to MU. Over the last couple of years, McCrae has served as a mentor and said she has observed Miller’s growth as an investigator.

She said she is struck by the way Miller connected her experiences at the VA to her current research.

“She merged her initial interest in addiction with sleep,” McCrae said. “She has picked the ball back up and is running with it.”

Miller made several important decisions when designing her experiment to ensure the validity of her findings.

She wanted to recruit a sample that wasn’t limited to college students. To do so, she paid for a Facebook advertisement that explained she was looking for young adults between the ages of 18 and 30 who drink alcohol and have insomnia.

Those who clicked were routed to a screen survey that vetted candidates to see if they qualified. She ended up having mostly, but not exclusively, college students in the study.

Those who qualified were invited to do a baseline assessment that consisted of a clinical interview, a Qualtrics self-report survey and a worksheet to record the amount of alcohol consumed during the past month.

After completing the baseline assessment, participants were given Actiwatches and instructed to wear them 24/7 for one week to monitor their sleep. Participants also needed to complete daily sleep surveys.

After one week, the research team looked over the Actiwatch data, as well as responses to the daily sleep surveys to determine who among the initial group was eligible to continue the study. The information gleaned from the sleep surveys was used to confirm data tracked by the watches.

A requirement in the study was spending more than 30 minutes lying in bed awake for at least three days out of the week. Also, to ensure there were no confounding variables, those with severe symptoms of sleep apnea were excluded from the study.

The group with therapy received five sessions of in-person treatment for insomnia over a five-week period, one session per week, led by MU graduate research assistants studying either clinical psychology or counseling psychology.

In the first session, participants heard about the science behind their treatment and received a list of sleep hygiene recommendations.

The second session centered on behavioral techniques. Those in the study were asked to cut the number of hours they spent in bed to improve the quality of their sleep. They were also asked to use their beds only for sleep.

In the third session, they learned relaxation techniques. They sat in a brown recliner chair in a “relaxation room” while practicing breathing exercises and visualizing places where they felt relaxed.

The fourth session looked at cognitive techniques. Participants discussed their thoughts and underlying assumptions about sleep. They worked on reframing the thoughts that stopped them from getting quality sleep.

In the final session, research assistants discussed with participants relapse prevention and warning signs that indicate their insomnia might be returning.

The second group received only a single session. In this session, a research assistant went over a one-page handout of sleep hygiene recommendations from the National Sleep Foundation website.

Participants in both groups completed daily surveys throughout the five weeks.

After the five-week experimental period, participants from both groups were called in to complete a post-treatment survey. This consisted of a Qualtrics self-report survey and a worksheet to report the amount of alcohol they consumed in the past month.

After completing the post-treatment assessment, participants were again given Actiwatches and instructed to wear them for a week. They also responded to daily surveys for a week.

A month later, Miller wrapped up her study by asking participants to complete the same tasks they had for the post-treatment assessment.

Miller found that the CBT-I group, which received the five weeks of therapy, had bigger improvements in insomnia and that these improvements were connected to a reduction in alcohol-related problems.

Her findings suggest that heavy drinking won’t diminish the efficacy of insomnia treatment.

“You don’t need to wait and make people be abstinent to give insomnia treatment,” Miller said. “If they have insomnia, treat it.”

However, she said her results may not apply to those with severe alcohol use disorders, and she acknowledges there is a lot of work left to be done.

“We don’t really know enough from this one study to make strong recommendations on treatment,” Miller said.

“I would eventually like to be able to say ‘Look if you have someone experiencing problems related to drinking, and they struggle with insomnia, consider starting with insomnia treatment.’”

Paul Korte, a clinical psychologist at the Harry S. Truman Memorial Veterans’ Hospital, has followed Miller’s research closely. He sees how it could be applied to primary care treatment for veterans.

“Expanding (cognitive behavioral therapy) for insomnia treatment, particularly among our younger veterans returning from Iraq and Afghanistan, can reduce sleep difficulties and in turn, could curb any alcohol misuse,” Korte said.

“The VA is already offering CBT for insomnia, and, with increased attention to the benefits of this intervention, our health professionals will be able to offer additional information to help veterans manage their health.”

McCrae believes Miller’s work will have a larger application.

“Her research ultimately links back to how important sleep is for overall health,” McCrae said. “This is important because we probably have the worst sleep we have ever had as a society.”