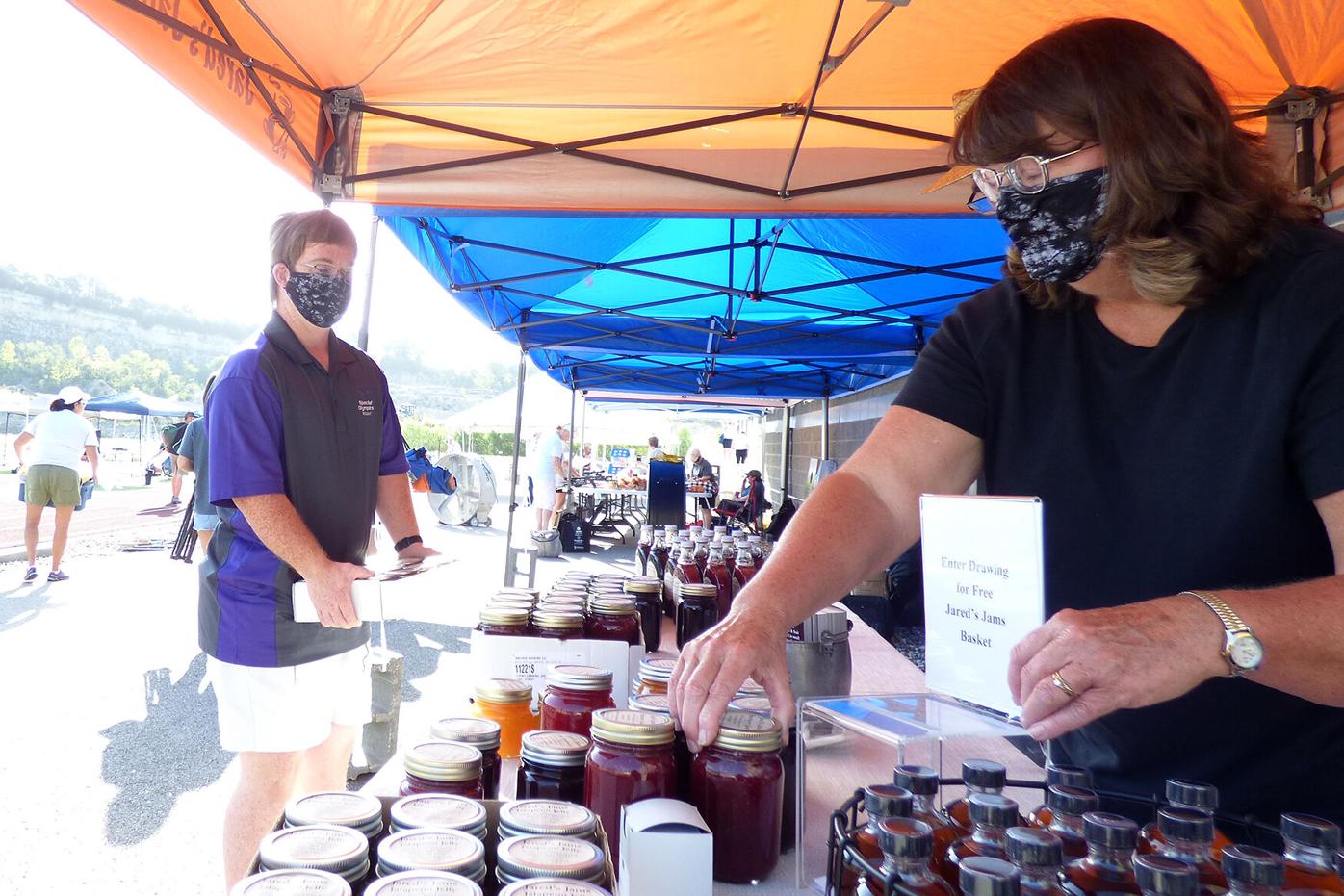 Jared Niemeyer, left, and Brenda Niemeyer set up a pop-up shop at a Special Olympics event in Jefferson City. 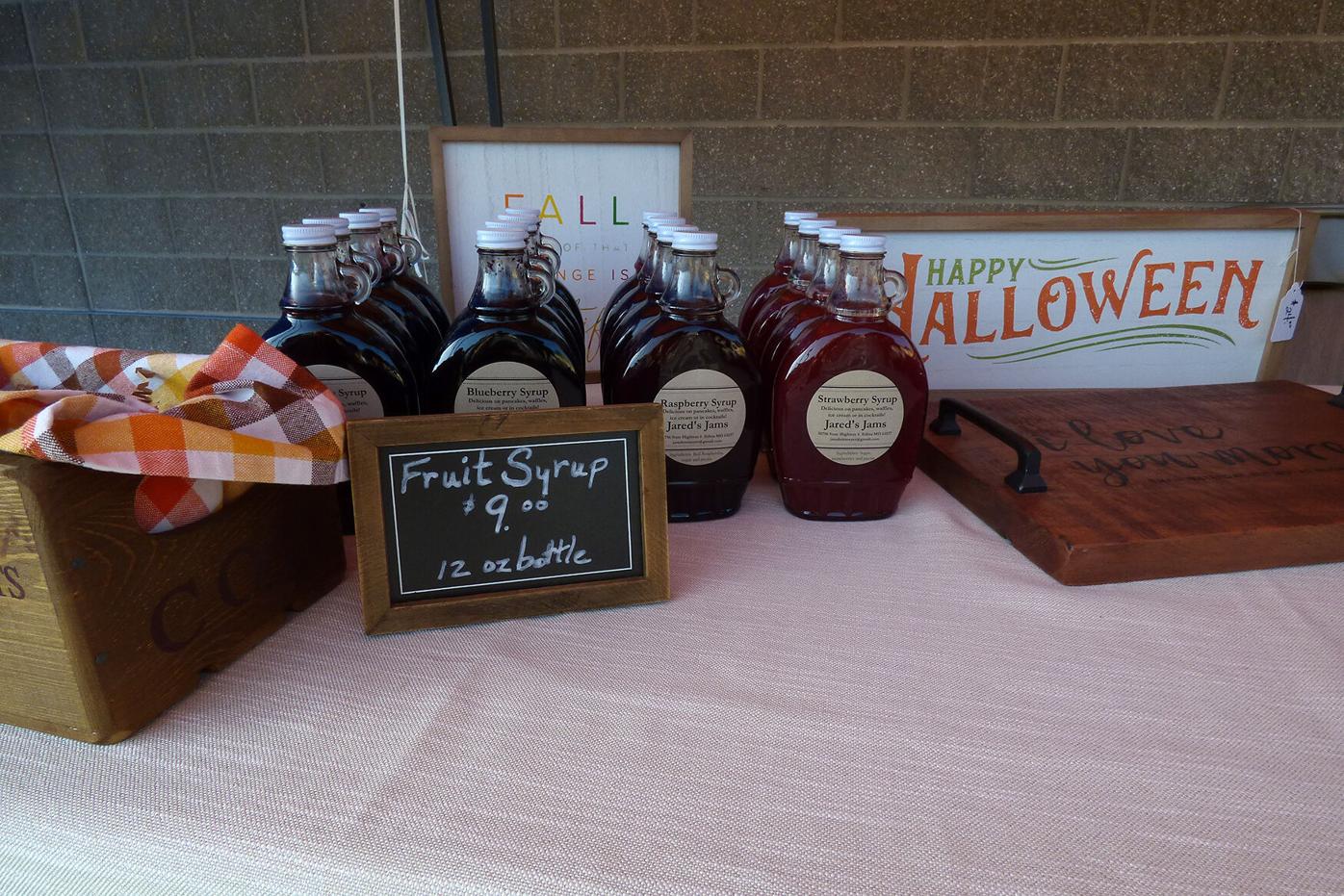 Fruit syrup is one of the many products Jared’s Jams sells. Brenda Niemeyer also brings home decor for sale and to decorate the booth.

Jared Niemeyer, left, and Brenda Niemeyer set up a pop-up shop at a Special Olympics event in Jefferson City.

Fruit syrup is one of the many products Jared’s Jams sells. Brenda Niemeyer also brings home decor for sale and to decorate the booth.

Immediately after Jared’s Jams was founded in 2014, Jared Niemeyer and his parents would harvest fruit from their backyard garden to prepare flavored jams and jellies.

The fruit would be heated on a stove in their Edina home before being bottled and sold at the weekly farmers market or at Special Olympics events. The money made from jams and jelly sales would be donated to Special Olympics.

That was until the business grew to the point where the family could not produce enough fruit to keep up with demand. Their plans were directed toward more production and eventually an online store.

After deliberately searching for a sensible solution, Jared’s Jams turned to fresh frozen fruit to produce from the wide variety of jams, jellies, syrups and more they sell. Jared primarily gets his fruit from fruit wholesaler, Kohl’s in Quincy, Illinois.

Jared’s Jams does not yet have a store front, but the Niemeyers regularly participate in the Saturday farmers market in Edina, in addition to hosting pop-up shops during Special Olympics events throughout Missouri.

The business sells coffee beans, vanilla extract, fruit syrups and wall decorations in addition to jellies and jams. During the summer, jalapeño jam is also for sale.

Patricia Lutz was the area director for the Northeast Missouri region when Jared Niemeyer first began competing. Lutz has seen his business grow since he began making jams and jellies.

“He makes vanilla, homemade vanilla and he also makes syrups. The blackberry and the strawberry syrups are really good. But they’re just delicious.” Lutz said.

Jared’s Jams was started after Niemeyer, 29 , made a trip to the United Nations in New York to speak during the Convention on the Rights of Persons With Disabilities.

He talked about his experience as an adult with Down syndrome and opportunities competing in the Special Olympics while at the convention.

After the convention, he decided to start Jared’s Jams to donate money to the Special Olympics, the organization that gave him the opportunity to speak at the U.N.

Jared Niemeyer used his grandmother’s jam recipe to begin creating a product to sell. He then heated up the fruit from his backyard garden on his stove and packaged the jam from his home kitchen.

Throughout Jared Niemeyer’s experience as a business owner, he has graduated from Kirksville Senior High School, maintained a part-time job as a customer service clerk at Hy-Vee and participated every year in Special Olympics.

After six years of attending various events, the family decided to open a storefront in hopes of having a commercial grade kitchen to begin shipping their products.

When a building on Fourth Street in Edina opened up, the Niemeyers made the decision to buy the space in March and began to renovate it as a storefront for Jared’s Jams in April.

The storefront includea a federally approved commercial grade kitchen with an area for shipping. The kitchen was inspected by the Missouri Food and Drug Administration on Tuesday, one day before the opening.

“The purpose of the kitchen is to be able to have a website to be able to ship across state lines and to do a little bit more with this than we have been able to do,” said Brenda Niemeyer.

On Wednesday, Jared’s Jams opened the storefront on the town square in Edina.

The Niemeyers hope to open the kitchen to high school students for class credit to build their skill and experience.

“We will be able to have students from the area earn high school credit as juniors and seniors and every day work in the kitchen to gain employment skills,” Brenda Niemeyer said. “To gain the ability to self manage and build confidence to learn those habits that help them be an effective employee.”

Students will be able to work in the kitchen for class credit as early as January, at the start of the second semester.

Who: Jared, Brenda and Dan Niemeyer

When: Hours vary by week

Find the events, displays and activities to put you in the holiday spirit in our winter tourism guide. Read the stories.

How do you get your news?

Fill out our survey to share how you engage with the news.

What you need to know about roadwork and construction around Boone County.