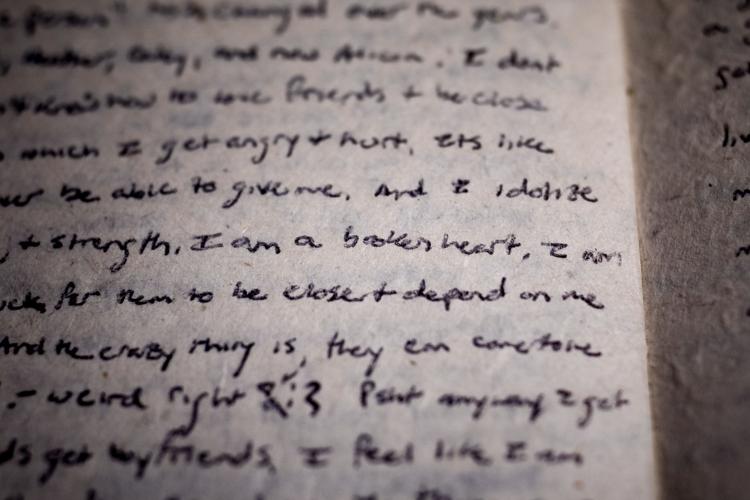 On March 5, 2012, Amanda Loucks wrote, "I am a broken heart," in her college diary. Loucks noted how empty and lost she felt without her community. After this entry, Loucks refrained from journaling until 2014. 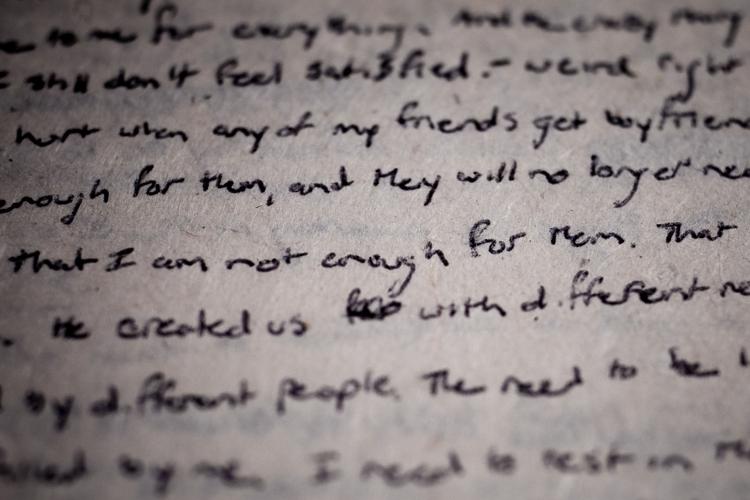 In her college diary, Amanda Loucks wrote, "I am not enough for them," on March 5, 2012. "I was very scared and I didn't think anyone or anything could help," Loucks said. After this entry, Loucks refrained from journaling until 2014. 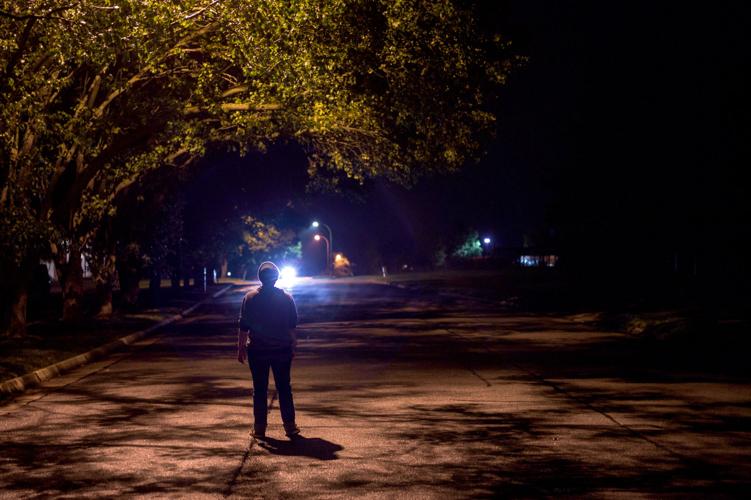 “Now it’s time to let in the light,” Amanda Loucks said. “The school and the church took so much away from me. They can’t take this, too. They don’t get these moments, and they don’t get to manipulate my identity anymore. It’s mine.” 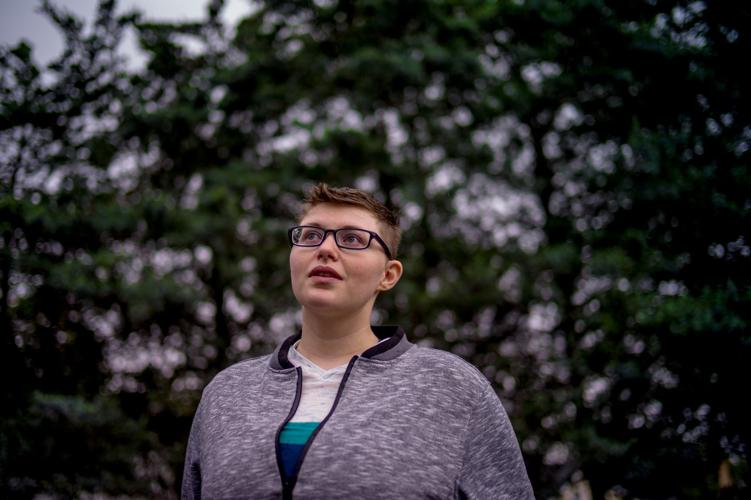 “I felt like my world was destroyed, but now it’s amazing to feel like myself, like all the parts that I thought were gone are back,” Amanda Loucks said. Above, Loucks poses for a portrait Oct. 6 outside The Center Project. 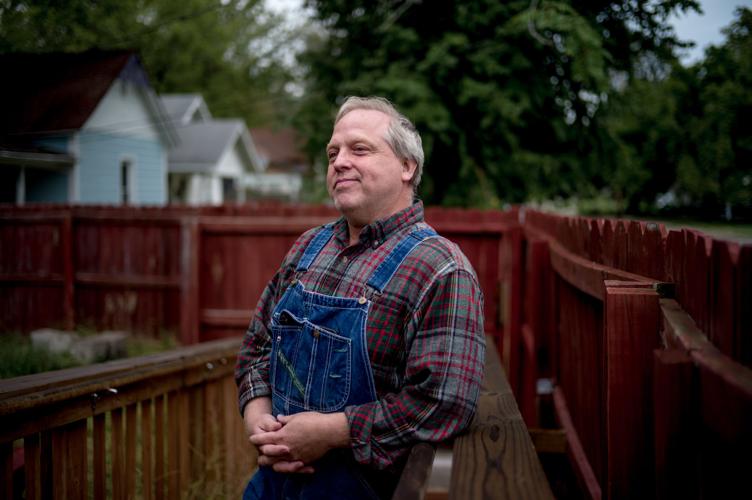 Howard Hutton, board member of The Center Project, brought Amanda Loucks to Columbia from her home in Michigan to testify at the final hearing of Columbia's conversion therapy ban, which he initiated. Here, Hutton stands outside The Center Project on Oct. 6. 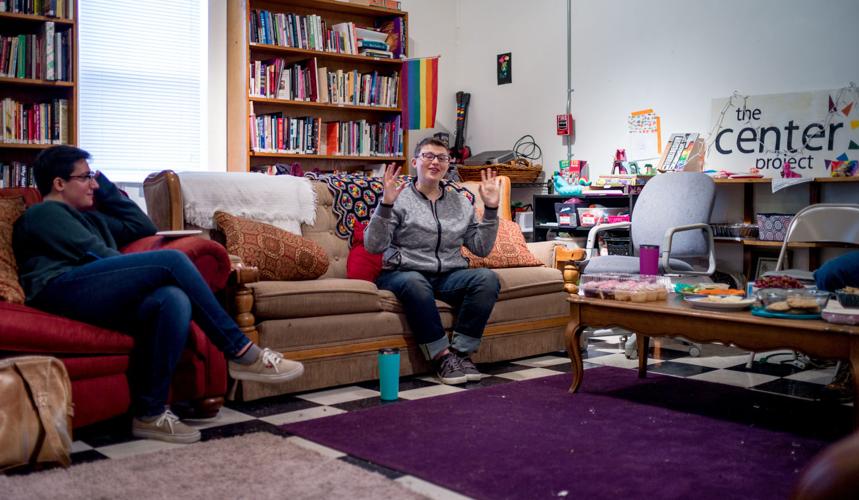 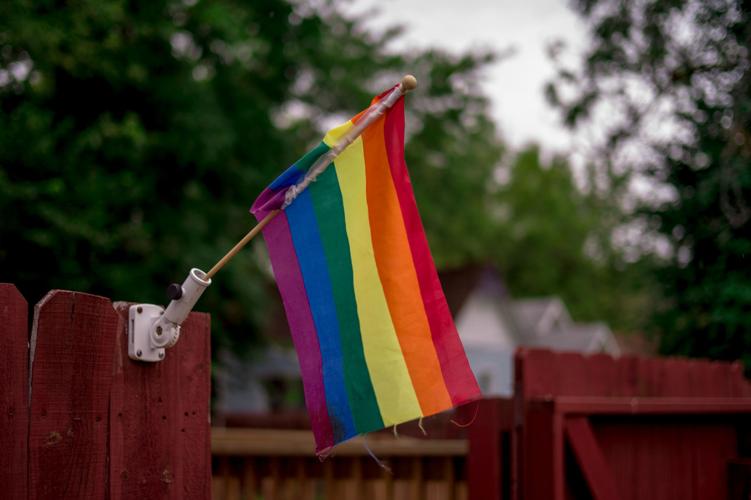 A pride flag, placed by Howard Hutton, hangs outside the entrance to The Center Project on Oct. 6. Hutton removed the flag upon closing and locking the center after a planned gathering. 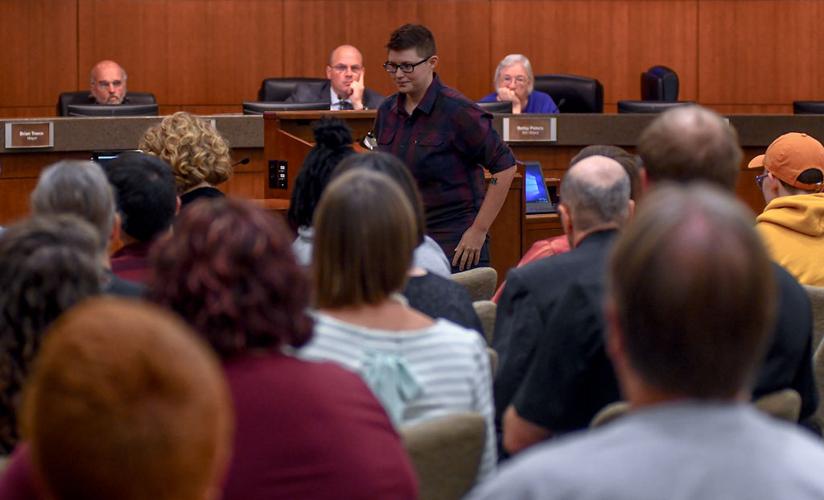 After landing at Columbia’s airport, Amanda Loucks didn’t want to listen to the radio in the car. She was afraid to hear Christian songs — too triggering. She’d always worried about coming back to Columbia, and yet she felt stronger than she thought she would.

Loucks, who spoke Monday to City Council, is the first and, as of now, the only person to come forward to speak about receiving conversion therapy in Columbia. Her testimony humanized the recent ban on the practice on juveniles within city limits, which was unanimously approved by City Council that night.

Since 1998, the American Psychiatric Association has opposed conversion therapy, the attempted alteration of one’s sexual orientation using psychological, religious or spiritual interventions and therapy. Columbia is the first city in Missouri to ban the practice.

Loucks wasn’t always the person she is today — a short-haired, bubbly woman entering her 30s on her way to a graduate degree. Her life wasn’t always so full of promise, she said.

Growing up in in central California, Loucks’ family struggled financially. Her church, Grace Community Christian Church, was a free playground and a safe place for her. As the congregation became a second family, it also shaped her worldview.

When Loucks, who identifies as lesbian, discovered her same-sex attraction at age 17, she panicked.

“It was the first time I felt like I didn’t fit in the church I loved,” she said.

In secret, Loucks confessed to the church’s youth minister.

“He was freaked out,” she said.

He was like a brother to her, so when he told her about a “cure,” she embraced the idea.

Loucks declined a scholarship to study veterinary medicine at UC Davis and decided instead to attend Central Christian College of the Bible in Moberly.

“I thought this was the best option,” she said. “I gave up what I wanted for what I thought I needed. I thought attending a Bible college in the ‘Bible Belt’ would definitely help me be straight.”

So she drove to Missouri from California and threw herself into leadership and involvement in school.

“My coping mechanism at the time was just to become absolutely as busy as possible,” she said. “Then there's no time to think about the things I'm screwing up.”

After neglecting and hiding her attraction to women in her freshman year, Loucks decided it was time to address her sexuality and take it in her own hands — literally.

She stole a book on changing sexual orientation from her college library, hoping to find answers.

The book was published by Exodus International, a non-profit organization that provided interdenominational support to Christians attempting to change their sexuality. The organization no longer exists.

“It felt great, because Exodus told me that there was a reason for all this. It created a different narrative,” she said. “It said, you didn't choose it, just something bad happened to you, like assault or abuse. I just have to fix those experiences and then I’d be good.”

When Loucks came out to some mentors privately, they told her it might be time to “take it up a notch” and seek counseling.

With a single Google search, Loucks found her answer. Twice a week, she drove more than 35 miles from Moberly to a counseling center in Columbia to learn how to overcome her attraction to women.

She said she received conversion therapy at Morningstar Christian Counseling on Business Loop 70 to discuss readings, cultivate her femininity through phone conversations with her mother and explore possible reasons for her attraction to women. (The center closed in 2016.)

“They used to ask me ‘Have you been praying? Have you been trying harder? Have you done enough?' And I was not positive. What else could I do?” Loucks said.

Almost a year later, Loucks came out to the administration at the then 400-student Central Christian College of the Bible.

“They immediately cut me from all areas of leadership and told me I was a danger to kids since I may sexually abuse them,” Loucks recalled. “I couldn’t touch other women at all, not even during prayer circles.”

Loucks describes the end of her undergraduate studies as lonely, miserable, isolated and dehumanizing.

“I didn’t talk to anyone or hang out with anyone,” she said.

Even an internship opportunity she’d lined up at an Australian church fell apart after someone at Central Christian notified the minister that she was undergoing conversion therapy. She flew home two weeks after arriving in Australia.

She was an absolute mess.

“I had tried for over eight years to change my orientation, and I failed every single time,” she said. “And God is obviously pissed at me for doing this. So if I was such a failure, why should I stay? Why should I live?”

With her brother’s gun within reach, she called her best friend. What was intended to be a goodbye conversation turned into something more hopeful, and Loucks decided living was the better option. It was this conversation that sparked her interest in alternative, LGBTQ-affirming theology. While exploring that new path and working to pay bills, Loucks was still seeking a way out of the pain.

She remembers waking up in the hospital. During a heavy downpour, Loucks’ car had hydroplaned into oncoming traffic. She broke her pelvis, ribs, vertebrae and suffered a traumatic brain injury.

Doctors, nurses and visitors all spoke of how lucky she was to be alive, but she wasn’t feeling it.

“It should have killed me,” she thought. “I only asked God for two things in life — number one, to be straight, and number two, to die in a car accident. He didn’t give me either.”

When Loucks came out of amnesia, Hali McRoberts, her best friend, was at her bedside. “Hali walked me through life after my accident,” Loucks said.

“Everything that gave Amanda a sense of purpose and value, and including relationships and just community in general, was taken from her even before the accident,” McRoberts said. “Somewhere inside of her, despite all the despair, there was this tenacity. Having watched her be beaten down, and broken both physically and psychologically, it was incredibly inspiring to watch her through rehab.”

Loucks had always had an inherent need for a strong sense of community, McRoberts said. “The community of people who came alongside of her after the accident, not just physically rehabilitated her but I think just restored her hope in humanity.”

After 10 weeks of physical rehabilitation to relearn how to walk and perform other motor skills  Loucks left Michigan in search of a new network, a new support system to ground her.

“Amanda went through a drifting period of moving around for quite a bit before landing back in Michigan,” McRoberts said. “Amanda has this skill of being so strong and energetic but also so soft and passionate for people — she needed that time."

Today, Loucks is working towards her graduate degree in social work with a focus on organization and community leadership. She also interns at a Michigan company called Gateway, allowing her to work with homeless LGBTQ youth or LGBTQ youth who have trouble maintaining permanent housing.

“It's been so long that I've been able to work with kids, and just getting to be with them has been so much fun,” she said. “Since 2013, I felt like working with kids wasn't an option. I felt like my world was destroyed, but now it's amazing to feel like myself, like all the parts that I thought were gone are back.”

When Carol Sattler, whose child went through conversion therapy through a Kansas City doctor, and Howard Hutton, board member of The Center Project in Columbia, heard of Loucks’ story, they made a call.

"Many people couldn't come forward and tell their story because of the PTSD involved with people saying you're sinful or sick," Hutton said. "Amanda's story is just real, and because this issue is still happening in the area, it was crucial."

When Loucks heard Sattler's voicemail, she knew it was time to take a stand. “This was my time to prove them wrong. I made a promise to myself when I was going through that: I would never be like the people who hurt me — never."

Loucks’ speech Monday night, didn’t explore every aspect of her experience. But she talked about what she wished she’d known as a troubled teen.

“My life could have been far less painful, if only I could have known the failure rate of conversion therapy,” she noted.

“I started realizing that there's so many LGBT Christians,” she said. “There's so much more to this black-and-white world that was constructed for me, the worldview that I had since I was a kid.

Now, Loucks looks forward to the future of her identity and her career in policy-changing social work.

“The school and the church took so much away from me, they can't take this, too,” she said. “They don't get these moments and they don't get to manipulate my identity anymore. It's mine."