Boone County’s positivity rate was 24.1% Tuesday after a two-week stall in updates, caused by a data reporting glitch.

The updated positivity rate is less than previously reported but still shows an upward trend since Aug. 21.

The most recent positivity rate reported before the correction was 44.6% for the week of Aug. 21 to Aug. 27. In light of the newly corrected data, the positivity rate for that week was actually 8.9%. That’s a difference of nearly 1 in every 2 tests versus 1 in every 10. 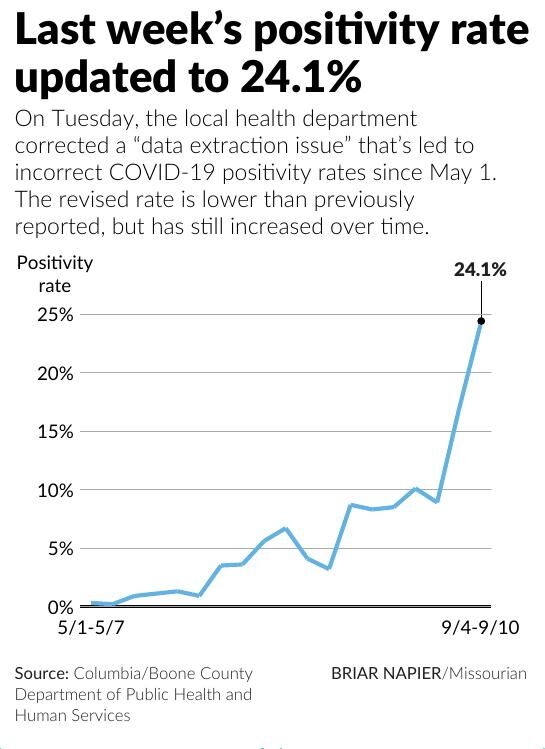 As previously reported by the Missourian, a local lab transmitted testing data in an incompatible format to the Missouri Department of Health and Senior Services. That reduced the total number of tests, which affected the calculation of the positivity rate.

The positivity rate is the number of positive COVID-19 tests divided by the total number of tests, times 100. This figure suggests the prevalence of cases in the community and informs public health policy decisions.

The Columbia/Boone County Public Health and Human Services Department became aware of the issue Sept. 3. The problem, it turns out, was with the number of negative tests reported to the state.

“We had been getting all the positive tests directly from the labs so that we could contact those people right away,” said Scott Clardy, assistant director of the Health Department.

The total tests — positive and negative — were sent to the state Health Department, which then shared the compiled data with the Boone County Health Department. Because a certain number of negative tests were unaccounted for, the total number of tests was lower — making the proportion of positive tests appear much higher than the actuality.

“It’s a relief to us that it isn’t as high as we thought it was,” Clardy said. ”But this trend is still upward, and that’s something we’re keeping an eye on.”

The other major discrepancy between previously reported data and corrected data is between positivity rates at the end of June, which were said to be at about 15%. They were actually closer to 5% and 6%.

Going forward, the Boone County Health Department will base figures on the COVID-19 dashboard by the dates that the tests were collected, Clardy said. Previously, they had been reporting based on when they received the tests. This will affect the statistics for cumulative daily cases and positivity rates . This will provide a more accurate picture of timing. Data may change after publication if the Health Department receives information about more tests.

Meanwhile, the total reported number of MU students with active COVID-19 has declined this week.

ELECTION 2020
What issues matter to you?

The Missourian wants to know what's on your mind leading up to November.