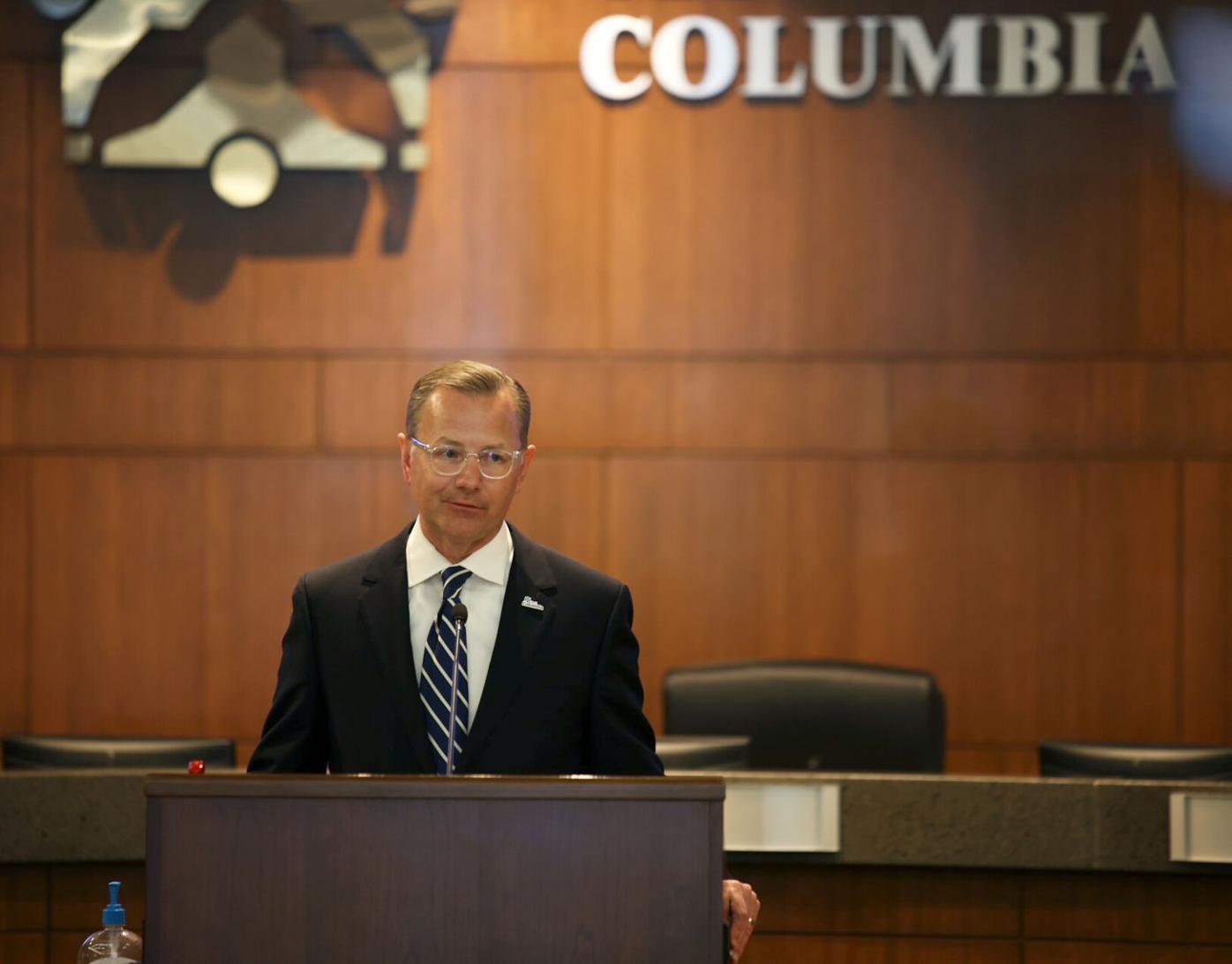 Columbia Mayor Brian Treece speaks at a community briefing on Monday, May 3. Treece announced he would not seek another term as Columbia mayor. 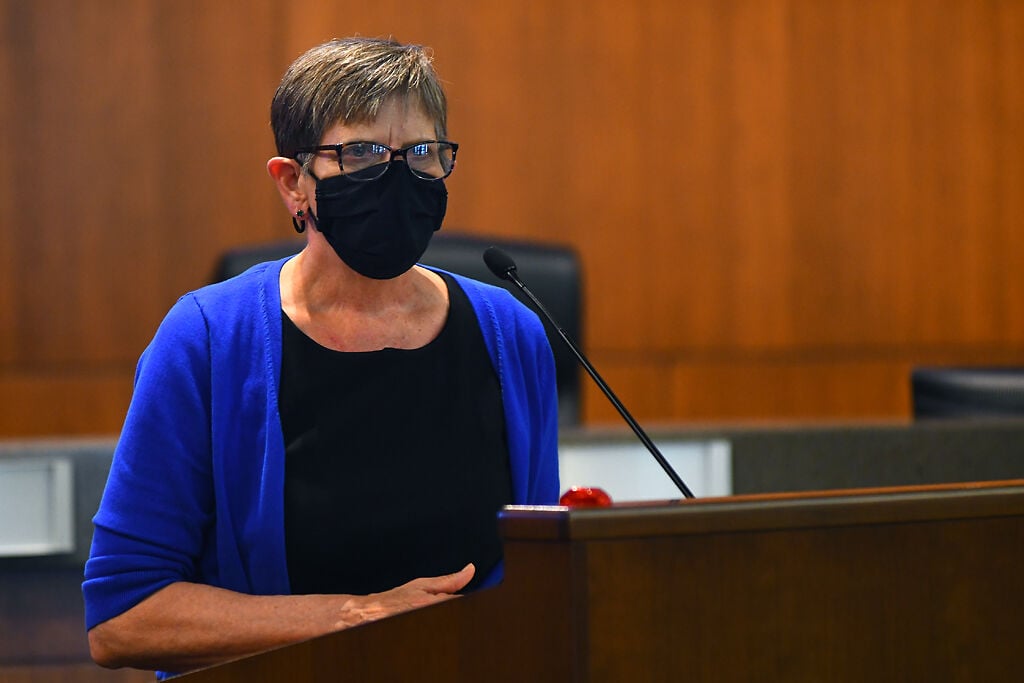 Stephanie Browning, director of the Columbia/Boone County Public Health and Human Services Department, at a community briefing in August in City Council chambers on Tuesday, Aug. 11. 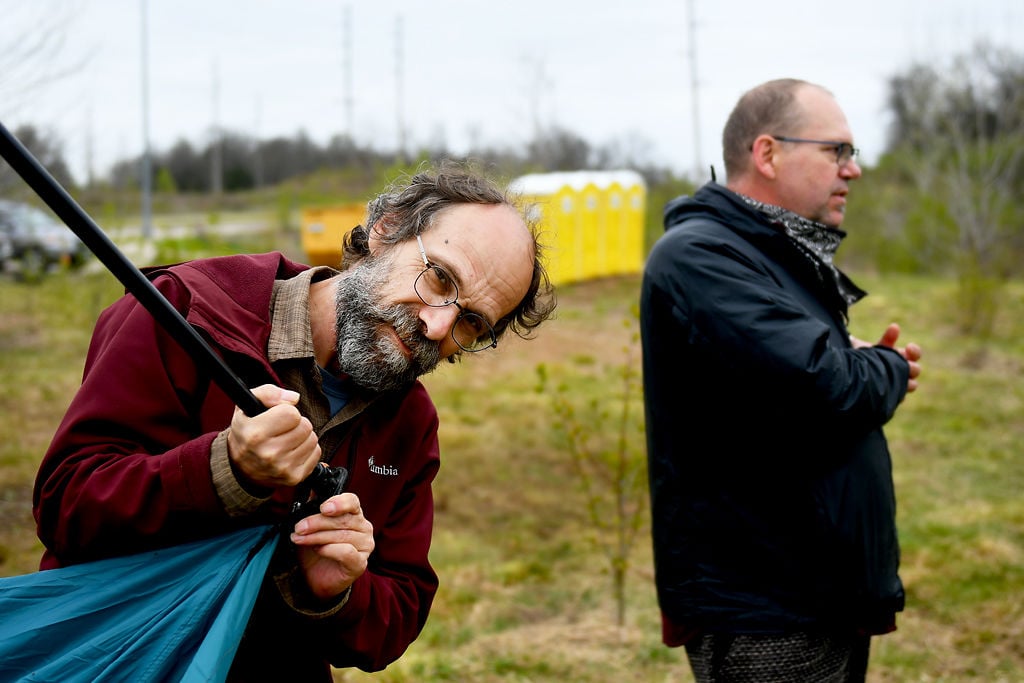 John Trapp, left, takes down a tent as his brother, Second Ward City Councilman Mike Trapp, has a discussion on Monday, April 6, 2020. Safe Camp, a temporary homeless camp at Providence and Blue Ridge roads, stood from Friday to Monday before neighborhood complaints shut it down. The Trapp brothers, co-founders of AAAAChange, established the camp after their efforts to open a homeless shelter at the Welcome Inn fell through the previous week. 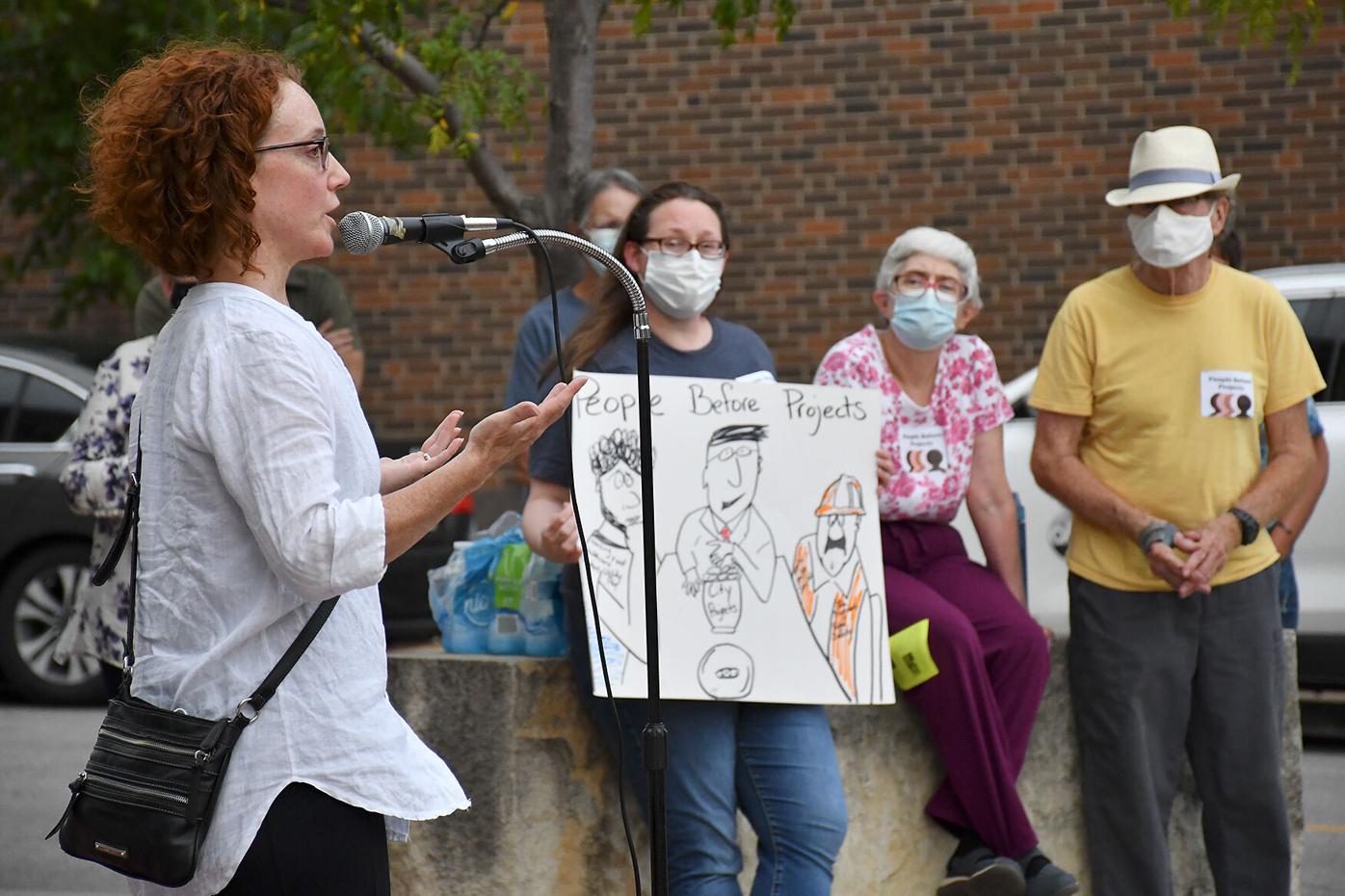 Activists watch as Renee Maxwell makes opening remarks of the People Before Projects rally Tuesday, Sept. 7, at the Daniel Boone City Building in Columbia. “We are here to tell the city that we want to use the funds from the American Rescue Plan Act to make an investment in the people of Columbia — people who have been historically underserved,” Maxwell said. 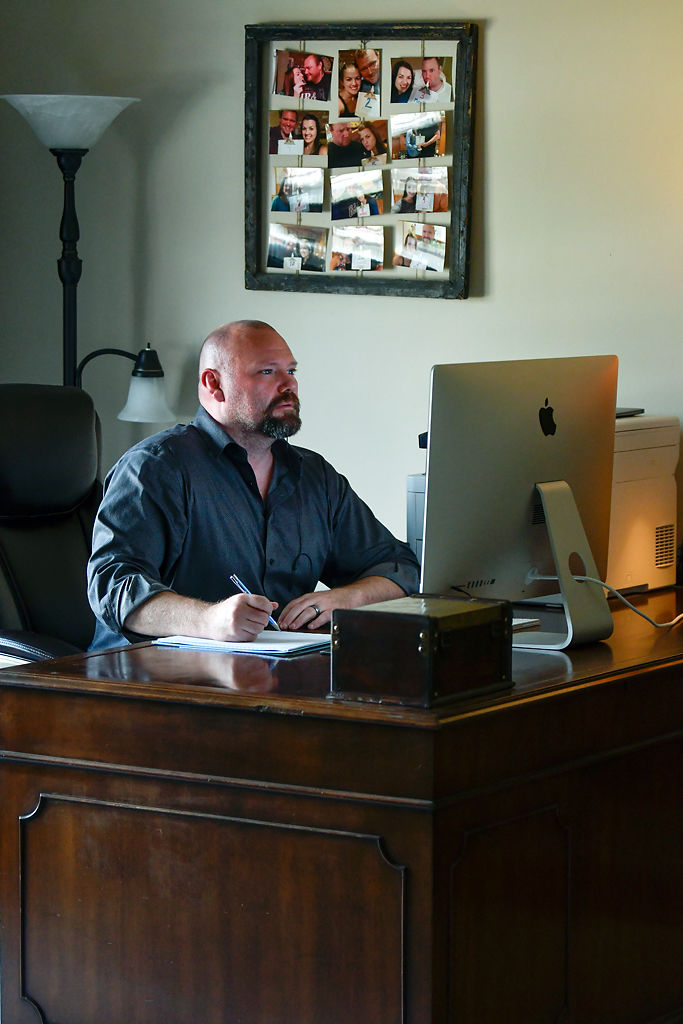 Almost eight months after President Joe Biden signed the American Rescue Plan Act (ARPA), the city of Columbia still continues to deliberate on its plan for using those funds.

For months, stretching from spring through three formal city budget hearings, the City Council heard a range of ideas from the public about how to allocate the funds. They also opened the floor to complaints that decision-making on the funds was not properly founded in current data and that core constituencies had not been consulted.

Finally, in late September, the council made it clear that a decision would be made outside the regular city budget process.

Originally, Mayor Brian Treece proposed an allocation of the funds, and that recommendation was included among the annual city budget documents. The council gathered public input and discussed ARPA spending options at length throughout the annual budget hearings. But uncertainty about the data behind Treece’s proposal alongside disappointment in its priorities prompted a slew of public comments and an outdoor public demonstration before the council’s Sept. 7 meeting.

Signed on March 11, 2021, the federal law allocated $350 billion to eligible states and localities over the next few years to assuage the economic and public health impact of the COVID-19 pandemic and to assist with recovery.

The city is receiving approximately $25 million from the American Rescue Plan. (Boone County will receive an additional $35 million.)

Half the funds — $12.5 million — have been received by the city and are being held until the City Council determines how they should be spent. The second half will be distributed by the federal government next year. The funds are required to be spent in four years.

This is a look at the long and winding road of the community discussion on how to spend the funds.

The road to now

Treece presented his original proposal recommendations for the funds during a May 26 budget work session. According to the PowerPoint presentation, he sought to allocate the funds toward a $10 million broadband project for underserved areas and smaller sums of up to $3 million each to stormwater, mental health, homeless shelters, the task force on community violence and workforce development.

By the next meeting on June 7, many members of the public voiced concerns over the city’s process of deliberation for the funds, saying it hadn’t properly solicited public opinion and the choices for ARPA spending weren’t based on substantial data.

They also argued that the plan didn’t effectively address structural inequalities or assist those who’d been most negatively affected by the pandemic, particularly those who were unhoused and impoverished.

Speakers such as Susan Maze emphasized that the historic, one-time influx of funds gives the city an unprecedented opportunity to fund issues that the council hasn’t prioritized, saying the city didn’t have funds.

They also argued that the plan didn’t align with the federal government’s instructions for the funds.

While all of the proposed projects technically fell under the federal government’s spending guidelines, the ARPA guidelines included an expressed vision of addressing “systemic public health and economic challenges that have contributed to the inequal impact of the pandemic.”

Treece said his proposal was based on a citizen satisfaction survey from 2019. But members of the public noted that not only did the survey take place before the COVID-19 pandemic but also before protests last summer in the wake of George Floyd’s killing spread more substantial understanding of structural inequality.

Treece reiterated that his ARPA recommendations were a proposal — not part of the budget — and pointed to the council meetings as opportunities to solicit public opinion.

Other council members — particularly Ian Thomas and Pat Fowler — said the city needed a more robust public input process to determine the fate of the funds. Fowler held a constituent event where she heard testimonies about needs from members of her ward.

Proponents of delaying the decision assembled an opposition group called People Before Projects, helmed by Susan Maze and Renee Maxwell. Their goal were to galvanize community organizations and members of the public and to disseminate information about their concerns.

Their concerns culminated in the Sept. 7 rally outside the city government building before the council budget hearing later that night where the group again voiced its concerns.

At the final budget hearing on Sept. 20, Thomas proposed that the city allocate funds immediately for a homeless services center and a 24/7 behavioral health services clinic, noting an urgent need for these services, putting off decisions on other spending. .

That proposal did not get support. But it finally prompted a statement from council members that any decisions on the fate of the $25 million American Rescue Plan Act funds would be made separately from the formalized annual city budget process.

Where the process stands

The final framework for how the council will make decisions about ARPA funds emerged at a public pre-council meeting on Oct. 4. It involves a two-pronged effort: seeking requests for proposals for specific spending areas while also engaging the community in a wide-ranging solicitation for advice.

The Request for Proposal (RFP) process allows city staff to formally look into specific issues and discuss them with relevant community organizations that have experience working to address them. An RFP allows community organizations to submit a business plan on how they can provide a good or service to the city. The issues discussed for RFP include:

The RFP process, unlike previous council proposals, does not assign specific dollar amounts to any of those areas but is expected to generate more realistic cost expectations. Council members said they anticipate the $12.5 million in hand would be distributed through this process.

For the remaining funds expected next year, the council will start a long-term process to look deeper into needs of the community and what it will cost to address those needs. The process will be centered around public input and include conversations with those most impacted by COVID-19, the council agreed.

Soliciting public comment will not take place solely within the formal city council chambers. Fowler reiterated that citizens have stressed that the city council public hearing process is not accessible to all community members. The process will be directed by Stephanie Browning, Columbia/Boone County director of public health.

Browning received high marks for her handling of a similar outreach program called the Community Health Assessment in 2018. That report received input from more than 1,500 Boone County residents.

March 11, 2021: President Biden signs ARPA into law, allocating $350 billion to states and localities for economic recovery. The City of Columbia will receive $25 million.

May 26, 2021: Mayor Brian Treece presents his recommendations for the funds at a budget work session, allocating $10 million to broadband and smaller sums up to $3 million to mental health, stormwater, homeless shelters, etc.

June 7, 2021: Members of the public start voicing concerns at the city council meeting. Throughout the summer, they argue that the city didn't solicit public opinion, cite any substantial data explaining their choices, and didn't assist those who'd been most negatively impacted by the pandemic.

Sept. 7, 2021: People Before Projects holds a rally outside the city government building before the council budget hearing where they continue expressing their concerns

Sept. 20, 2021: The city budget passes without the ARPA funds. The council members clarify that any decisions will be made separately from the city budget process.