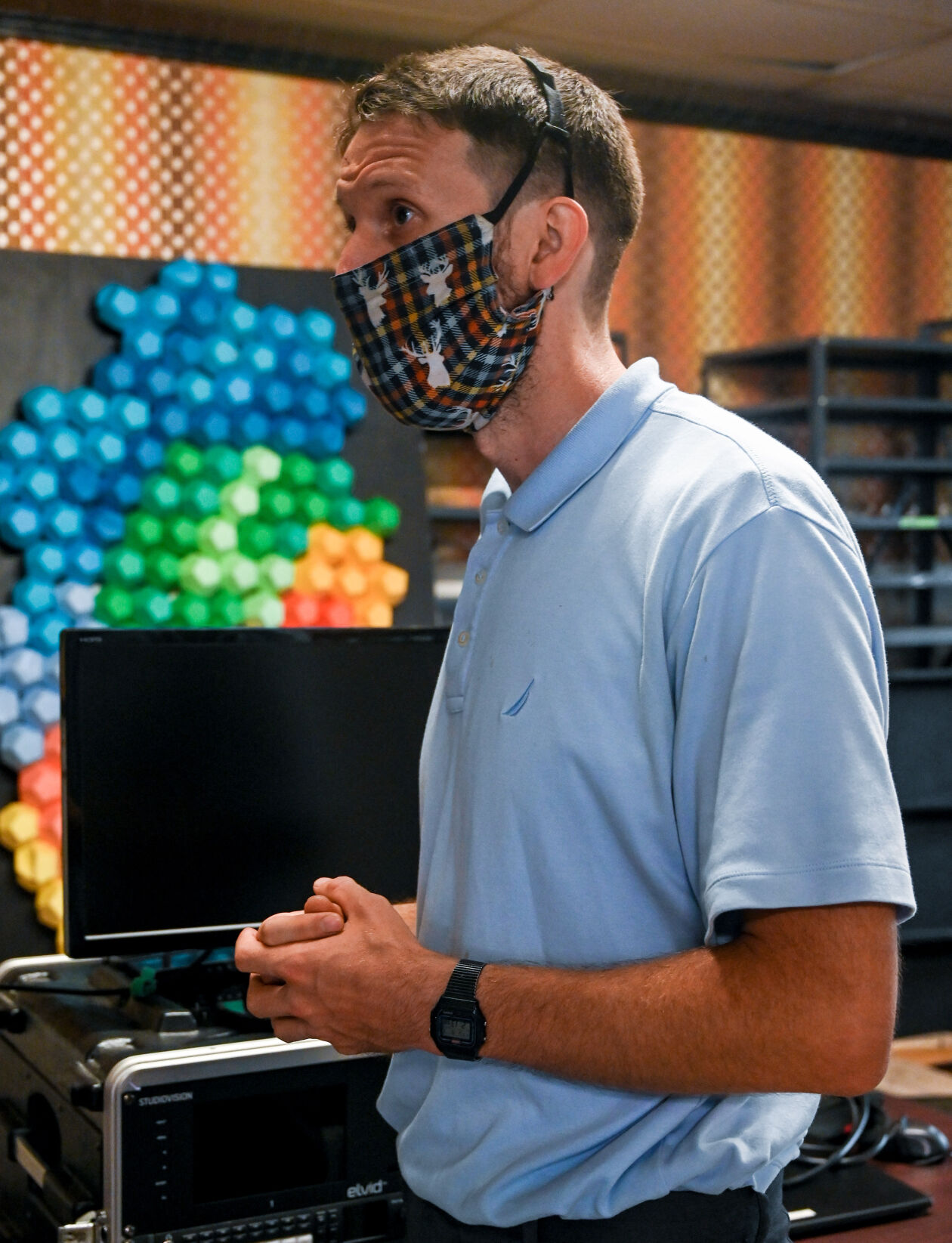 Matt Schacht speaks with a reporter Sept. 1. Schacht is the Vidwfest Board President. 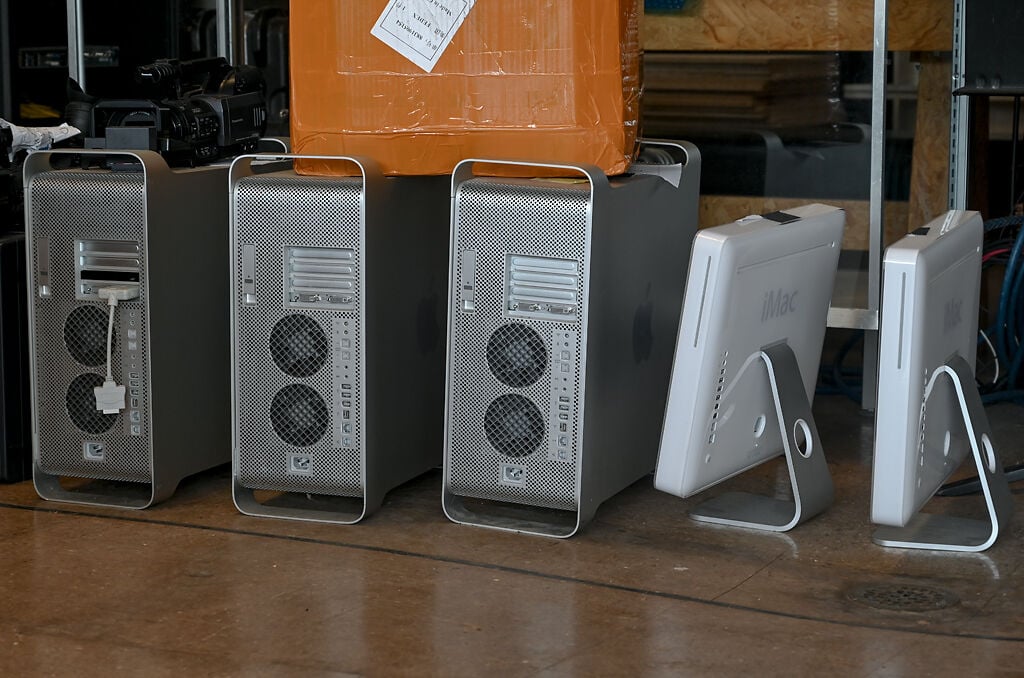 Old Mac desktops and towers are lined up on the floor Sept. 1, in Columbia. When Vidwest took over Columbia Access Television, they also received all of the station’s equipment. 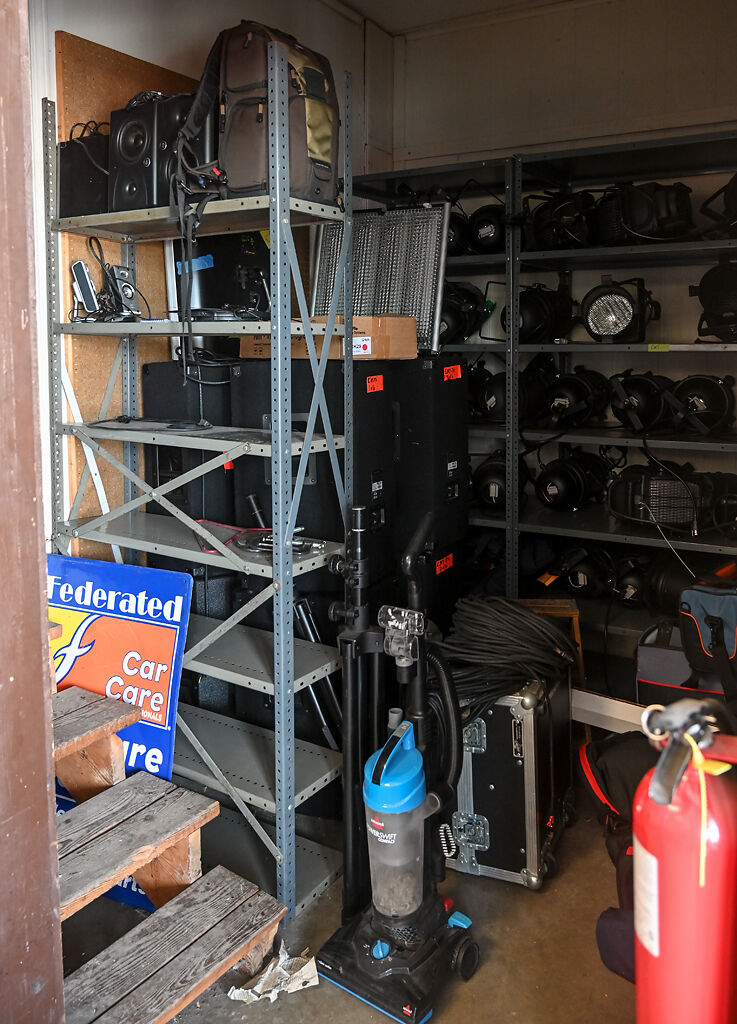 A storage closet is full of lighting equipment Sept. 1, in Columbia. Vidwest plans to use the equipment gained with Columbia Access Television to turn the broadcast company into a community media center. 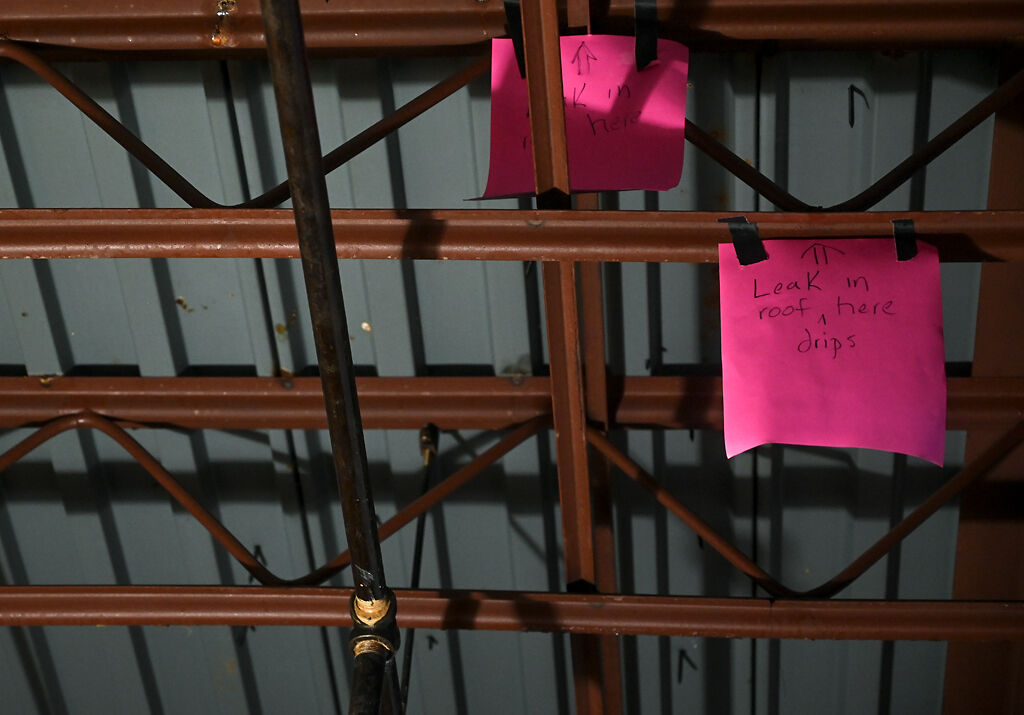 Signs warning of a leak in the roof are taped to beams Sept. 1, in Columbia. True/False Film Festival bought the building and are currently fixing it to pass the fire inspection. After the inspection, Vidwest plans to work out a lease with the film festival to open the new Columbia Access Television.

Matt Schacht speaks with a reporter Sept. 1. Schacht is the Vidwfest Board President.

Old Mac desktops and towers are lined up on the floor Sept. 1, in Columbia. When Vidwest took over Columbia Access Television, they also received all of the station’s equipment.

A storage closet is full of lighting equipment Sept. 1, in Columbia. Vidwest plans to use the equipment gained with Columbia Access Television to turn the broadcast company into a community media center.

Signs warning of a leak in the roof are taped to beams Sept. 1, in Columbia. True/False Film Festival bought the building and are currently fixing it to pass the fire inspection. After the inspection, Vidwest plans to work out a lease with the film festival to open the new Columbia Access Television.

This story has been corrected to reflect that CAT and the True/False Film Festival are sharing a leased building.

Columbia Access Television’s new space looks like an abandoned auto parts shop from the outside. Inside, however, there was a flurry of activity on a recent Tuesday afternoon. The smell of sawdust filled the air as a small group of people resumed the work that came to a halt in March.

The layout felt like a big jigsaw puzzle, some sections neat and complete while others remained under construction, power tools buzzing and whirring within them.

It wasn’t supposed to be like this. Vidwest in October 2019 won a contract from the city of Columbia to run CAT, the city’s public access cable channel. It received $35,000 in the city budget for fiscal 2020 with the expectation it would help make CAT active again and in the long-term be able to fund itself independently.

That goal of eventual financial independence was promising to all parties after years of CAT receiving smaller and smaller amounts of money from the city. In the end, the lack of support forced CAT to shut down in March 2019.

The reason for the reduced funding was simple. As the city’s budget tightened due to increasing economic troubles, City Council members pushed to redistribute money to areas such as police they considered more important.

The council in 2015 chopped CAT’s original city budget of $200,000 in half and continued to chip away over the years until the 2019 shutdown. That’s when the city began looking for private organizations that might be able to save it. Vidwest won that bid and was given $35,000 in order to run CAT for one year to see if it could be salvaged. 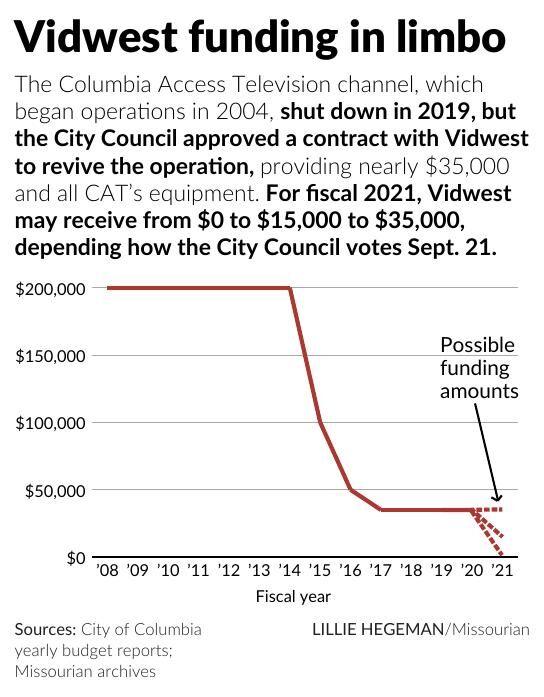 Vidwest came in with a lot of ambition, planning to build up a media center that creative minds could use and loaning out equipment and studio space to people who needed it. Vidwest Board President Matt Schacht said that would be of particular help in convincing creatively inclined graduates of MU and other local colleges to stick around after they graduate.

“It all comes back to providing low-cost, high-access equipment and digital media resources to Columbia,” Schacht said during an interview at the CAT building on East Business Loop 70.

Schacht said Vidwest’s original plan was to have the media center space ready by summer 2020.

These plans, like many others, were disrupted by COVID-19. The pandemic forced CAT’s rebuilding to go on hold for several months as people considered how to recover and rebuild.

“In a sense, what you’re seeing now is a time capsule from March,” Schacht said. “Things just stopped.”

It frustrated those working to revive CAT. Like any other public project, Vidwest’s plans had been in the works for a long time, everything for the next year planned around certain projected deadlines. The pandemic, however, threw those plans into disarray and created the risk that Vidwest would have little material progress to show the City Council when it came time to review Vidwest’s contract and determine how much money, if any, it would receive for fiscal 2021.

That time has come. Schacht made an appeal to the City Council at its Aug. 17 budget hearing.

“And so what we’re looking at for the role of a media organization is how can we use our resources and our expertise to address some of those problems?”

One solution Vidwest found was to pivot into providing live-streaming services. Schacht and others hoped they could prove CAT’s value to the community during the pandemic and be able to safely do events, even though the media center space was unfinished.

The first live-stream happened Aug. 1, when CAT assisted local nonprofit Access Arts in live-streaming its Studio Takeover Charity Fundraiser, helping to make it a virtual event in a time where an in-person fundraiser would have been impossible. Vidwest said in correspondence with the City Council that the event generated more than 1,000 views. Access Arts did not respond to requests for comment.

The pivot toward live-streaming is part of a larger three-year plan Vidwest has devised to try to achieve its goal of making CAT financially independent. Other aspects of the plan provided to the council include seeking grants from groups such as the Missouri Arts Council, phasing out CAT’s cable TV station in favor of streaming services and coming up with revenue-generating devices such as fee-based media workshops and hosting events at the new space.

It remains to be seen whether these efforts will pay off when the council makes final decisions on the budget. City Manager John Glascock has proposed the city simply eliminate Vidwest’s funding for fiscal 2021.

Vidwest has at least a couple of supporters on the council. Fourth Ward Councilman Ian Thomas has proposed a budget amendment that would give Vidwest $15,000 from the city’s general fund balance.

First Ward Councilwoman Pat Fowler went a step further, advocating that CAT get the same $35,000 it got for this fiscal year.

“I am an alumni of CAT-TV. I was in their first production class in 2005, and what I learned there was how to be a citizen who paid more attention, who cared about media literacy, and who then took her responsibilities as a community member more seriously,” Fowler said at the council’s Sept. 7 meeting.

Fowler argued that while different people go to CAT-TV for different reasons, it has the “ability to teach others to do that work is invaluable for our community, and at a very modest price.”

As the final vote on the budget draws near, Vidwest is remaining optimistic.

“CAT is a resource for all of Columbia,” Schacht said. “Being a volunteer trying to shepherd a venerable public resource through a rough patch, I feel partial to CAT’s survival. That’s my job, to care.”

Still, Schacht acknowledged there are significant needs in the community, such as improved policing and raising wages and benefits for modestly aid city employees.

“Hearing council members vocalize support for CAT, along with seeing the many letters of support written to council members by Columbia residents over recent weeks, indicates to me that Columbia wants CAT to stick around in some form.”

The main issue for CAT has always been money.