As of July 30, about 41% of Americans were avoiding medical care due to anxiety around COVID-19. Of that total, 12% were avoiding emergency or urgent care, and 32% were avoiding routine care, according to the Centers for Disease Control and Prevention.

The CDC’s study, released Friday, found that Black and Hispanic adults, people with disabilities, unpaid caregivers for adults and people with underlying medical conditions were most likely to avoid medical care.

The authors of the study noted that, since Black and Hispanic adults are more likely to suffer complications from COVID-19, the rates at which they avoided emergency care was especially worrying.

The study said that the inequalities may stem from factors including “prevalence and underlying medical conditions, health insurance status, and health care access and utilization.”

The CDC’s findings are in line with an analysis conducted in August by Harvey W. Kaufman, Zhen Chen and Justin Niles for Quest Diagnostics that found weekly cancer diagnostic rates from March 1 to April 18 for six major forms of the disease were down 46%. The six types of cancers studied were breast, colorectal, lung, pancreatic, gastric and esophageal. Diagnoses of each type of cancer showed significant decline. 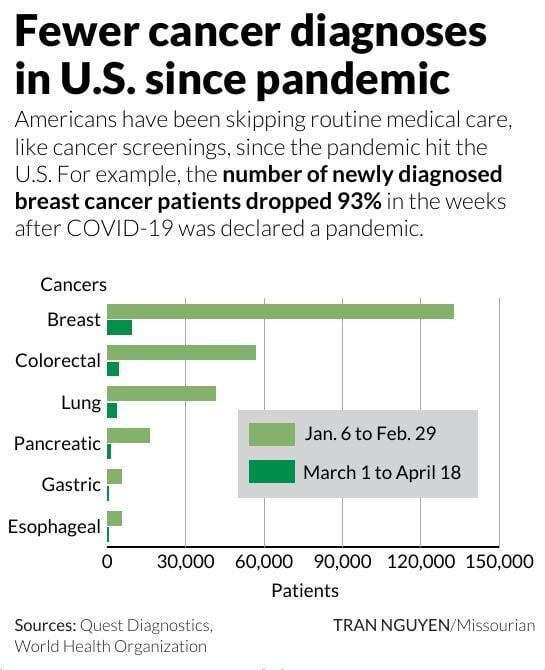 The authors warned the declines could foreshadow a coming spike in late-stage diagnoses. Tens of thousands of excess cancer deaths will take place over the coming decade due to delayed oncology care, according to modeling done by the National Cancer Institute.

“It’s not that people are getting cancer less often,” said Emily Albright, an MU Health Care surgical oncologist. “It’s just that we’re not picking it up.”

“Patients should acknowledge their fear and think about what are they doing to protect themselves,” she said, “and then try to come up with compromises.”

One compromise she suggested was trying to book the first appointment of the day when it is less likely that a doctor’s waiting room will be crowded.

Christopher Sampson, an emergency room doctor at University Hospital, said patients should trust that their medical institutions are adapting to the pandemic by implementing new safety measures. Sampson said that at University Hospital, even suspected cases of COVID-19 are kept entirely separate from the rest of the patient population.

“We work really hard to make sure people don’t get sick when they come to the hospital,” he said.

Telehealth has been particularly useful for emergency medicine, Sampson said. Before the pandemic, he said his emergency department did not use virtual visits at all. By the end of August, the department was seeing 400 to 500 patients virtually a month.

Sampson said that virtual consultations can be helpful for patients who do not want to risk coming into the hospital unless it is absolutely necessary. But, he said, when in doubt, patients should not hesitate to seek medical care.

Cancer screenings, like a mammogram, are not as conducive to virtual medicine, Albright said. However, she said she and her colleagues have adjusted the scheduling of appointments to allow for proper social distancing.

“We’ve adjusted the flow of patients through the hospital so that we can have less crowded lobbies, less people in waiting rooms,” Albright said.

Sampson said the initial numbers researchers are reporting may just be the first glimpse of the toll the pandemic will have on the country’s public health.

The numbers show some encouraging signs, though the number of patients in Columbia's hospitals has risen.