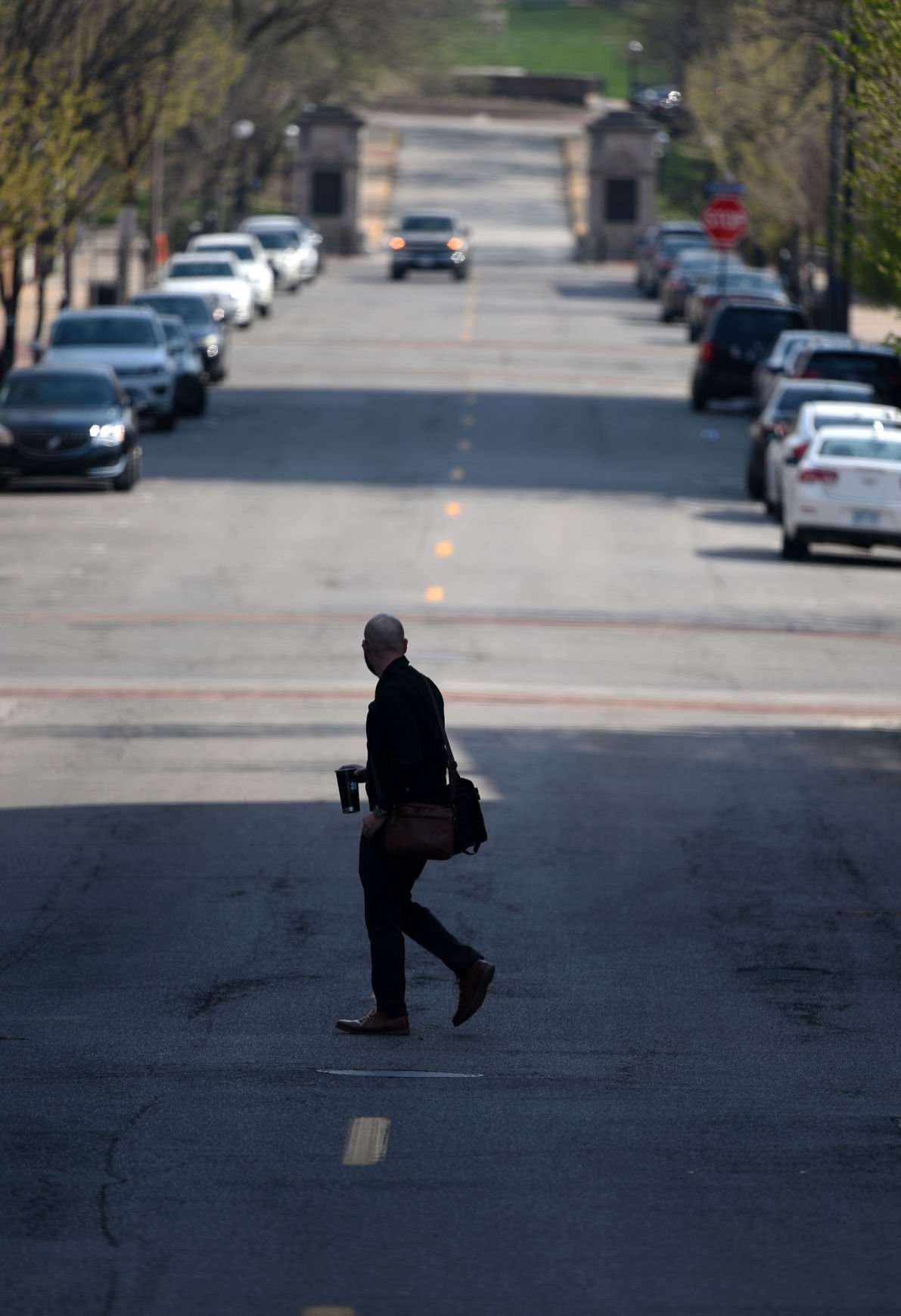 A man crosses Eighth Street on Wednesday in downtown. With MU postponing graduation, downtown businesses won't benefit from one of the busiest times of the year. 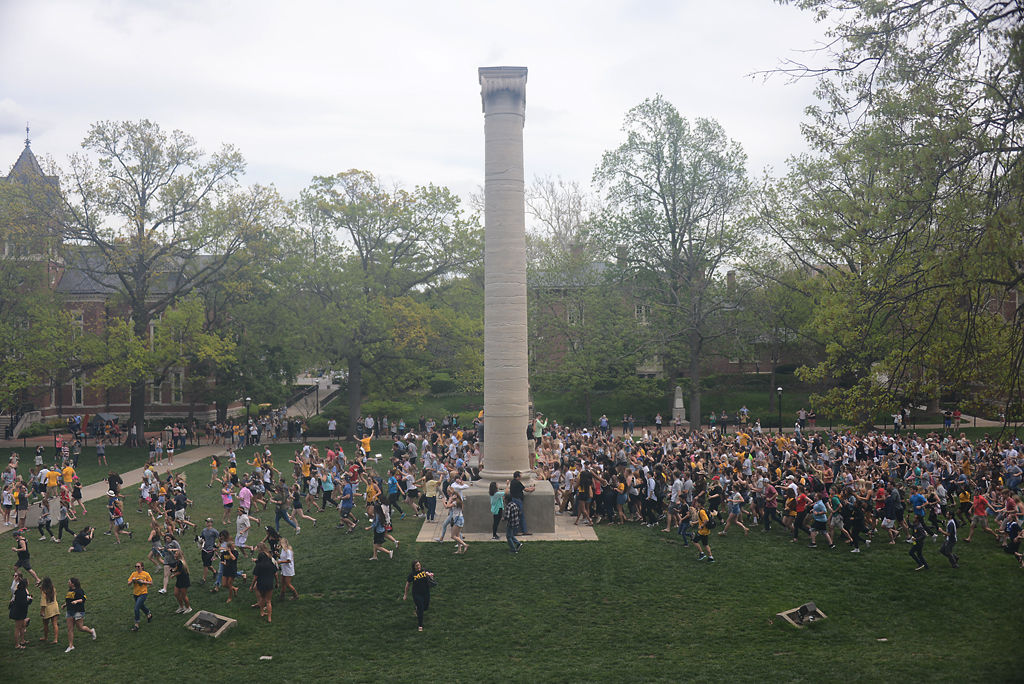 Graduating seniors run through the MU Columns during Tiger Prowl on Friday, May 4, 2018, at Francis Quadrangle. The students run from Jesse Hall toward downtown, signifying their graduation and entrance into the “real world.” 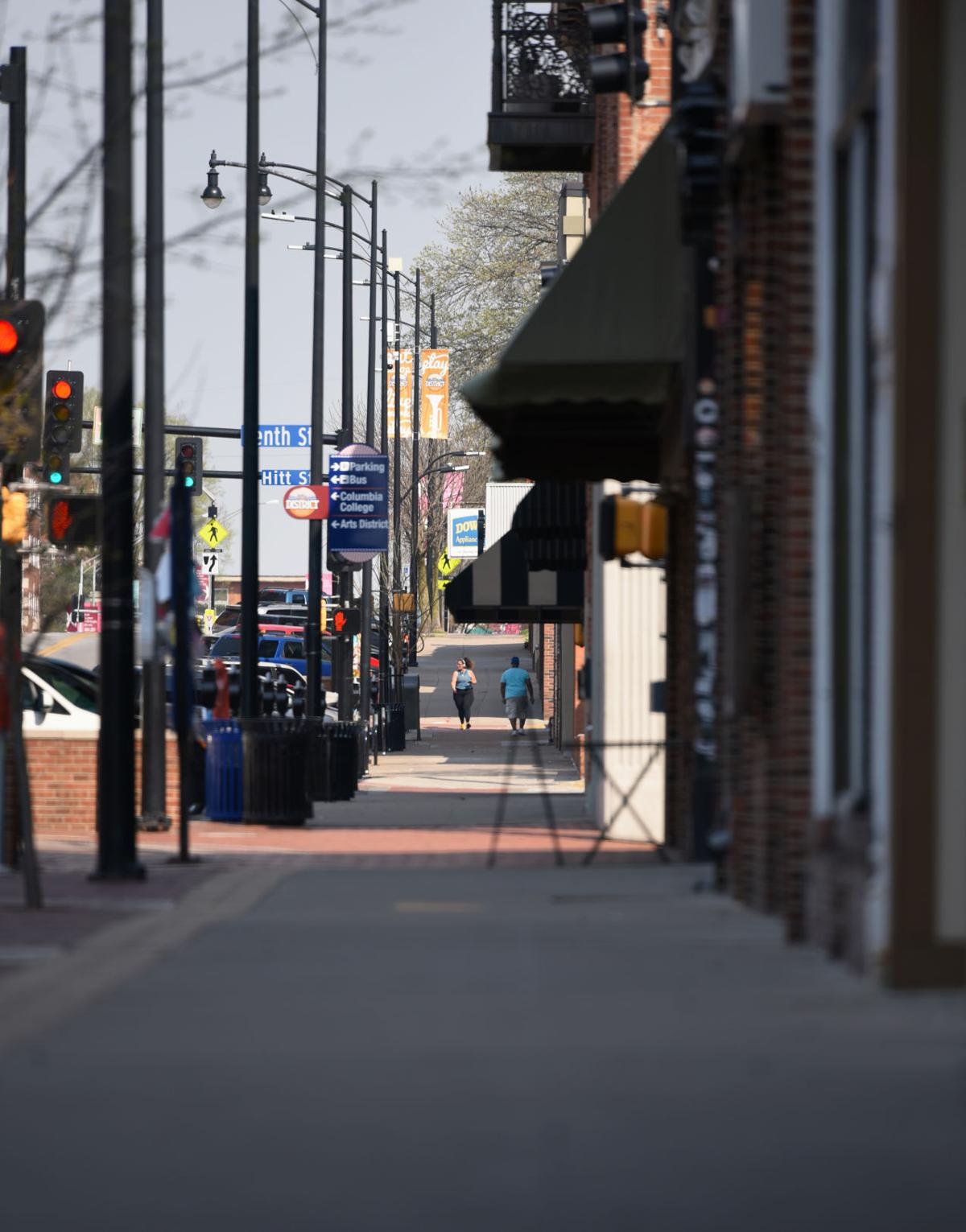 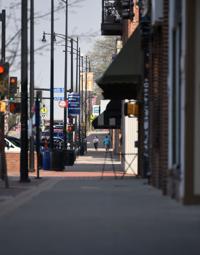 Broadway in downtown Columbia has been almost deserted because of the stay-at-home order to curb the spread of the coronavirus.

A man crosses Eighth Street on Wednesday in downtown. With MU postponing graduation, downtown businesses won't benefit from one of the busiest times of the year.

Graduating seniors run through the MU Columns during Tiger Prowl on Friday, May 4, 2018, at Francis Quadrangle. The students run from Jesse Hall toward downtown, signifying their graduation and entrance into the “real world.”

Broadway in downtown Columbia has been almost deserted because of the stay-at-home order to curb the spread of the coronavirus.

Lines stretching out the door, a dining room packed with customers and a whole lot of extra cheese: That’s what graduation weekend typically means for Shakespeare’s Pizza.

Come mid-May, the pizzeria would normally be one of many local businesses full of families and new graduates. It’s common for restaurant reservation books to fill months in advance and for hotels to reach capacity long before any graduate dons cap or gown.

After the University of Missouri System canceled MU commencement ceremonies April 2 in light of the COVID-19 crisis, many local businesses now have to figure out what business will look like.

Planned for May 15-17, MU’s graduation weekend would have included ceremonies for around 15 different MU schools and colleges, according to previous Missourian reporting.

Virtual ceremonies will be held instead, and graduates will be asked back at a later date. Stephens College and Columbia College have postponed their commencements as well.

Any other year, graduation weekend would mean a full house for Room 38 Restaurant & Lounge. Before MU’s cancellation, the restaurant had already booked 90% of its reservations for that weekend, co-owner Billy Giordano said.

Room 38 depends on the busy spring season to keep the restaurant running through the slower summer months. Giordano said the cancellations are just another example of how the restaurant isn’t making as much profit as usual.

He expressed empathy for the students who are missing out on their last months of college.

“We get these patrons in for anywhere between one and four years. They become regulars,” Giordano said. “They love our place and want to celebrate with us … , have their last big hurrah … , but we’re not going to have the chance to thank them and see them out this time.”

Kurt Mirtsching, a manager at Shakespeare’s Pizza, said while the graduation cancellations will definitely have an impact on business, it’s the loss of the daily regulars that is most disruptive.

“The busy weekends — graduation, Homecoming, True/False — those are the icing on the cake,” Mirtsching said. “It’s great to have those bumps, but our foundation is that we have a nice, strong customer base that likes to go out and enjoy pizza.”

Because of limitations put in place by Columbia’s stay-at-home order, Shakespeare’s — like many local restaurants — has lost many of those day-to-day customers in favor of curbside pickup and contactless delivery.

Adam Dushoff, co-owner of Addison’s and Sophia’s restaurants, echoed these worries. What concerned Dushoff was not necessarily the revenue lost from the cancellations but that the restaurant industry is being hit hard.

“It’s not the lack of graduation business that I’m worried about,” Dushoff said. “It’s the lack of all our business.”

There are over 3,600 hotel rooms in Columbia, and MU’s commencement weekend has been known to have hotels booked to capacity well in advance of the ceremonies themselves, said Megan McConachie, strategic communications manager for the Columbia Convention and Visitors Bureau.

MU graduation reservations at Stoney Creek Hotel & Conference Center filled all of the hotel’s 181 rooms for both Friday and Saturday night, with considerable numbers of visitors on Thursday and Sunday as well, said the center’s general manager, Heather Hargrove. Once MU announced commencement was canceled, Hargrove said cancellation calls started pouring in immediately.

On top of losing revenue from 362 room nights from Friday and Saturday alone, Stoney Creek will lose the catering revenue it would have received from graduation parties and other events. Hargrove said even a modest estimate of losses would still total around $60,000-$70,000.

“It’s devastating,” Hargrove said. “It affects everyone in some shape or form, like a trickle-down effect.”

Dustin Cook, general manager of the Drury Plaza Hotel Columbia East, also said graduation weekend was shaping up to be a big one for the 200-plus room hotel before the cancellation was announced. Drury Plaza received an influx of cancellations as well.

Nationwide, the hotel industry has lost more than $7.5 billion since mid-February, and that number is increasing as people travel less, according to data from the American Hotel and Lodging Association.

It’s projected that nearly 4 million people working in or for hotels across the country will either lose their jobs in the coming weeks or have already been furloughed. According to a report from the American Hotel and Lodging Association, over 55,000 of these job losses could occur in Missouri.

McConachie said graduation visitors are a boost to the city’s economy, with the average visitor spending about $500, according to previous Missourian coverage.

“When you multiply that by thousands of visitors, that (money) really increases quickly,” she said.

My Secret Garden is a floral shop downtown that provides the stage decorations for commencement ceremonies at Stephens College. My Secret Garden owner and president Ruth LaHue said spring is also a big time for graduation bouquets and decorative flowers for parties.

But now all of these events, and the floral orders associated with them, have been canceled. While the shop is open for contactless deliveries, the remote orders LaHue receives now don’t make up for the income lost from the typically busy graduation season.

Joe Chevalier, owner of Yellow Dog Bookshop, said May usually starts off the busiest time of the year, aside from Christmas. Now that the store is only open for deliveries, Chevalier said he spends most of his days in the shop alone.

Like many business owners, Chevalier said the graduation cancellation compounded the effects of losing everyday customers. In the past, students would stop in on their last walk around town or parents would come to buy a special edition of their graduate’s favorite book.

“People walk up the street, and, you know, it’s their last time walking through the heart of downtown. It’s one last stop before they go,” Chevalier said.

“It’s been really strange to go from a place that’s open every day and interacting with all kinds of people to being closed and alone in the shop.”

Many owners expressed that they had no choice but to wait for things to settle down, hoping for the speedy arrival of the light at the end of the tunnel.

“I think the turnaround will be slow,” Speake said of Sycamore and other businesses around town. “People will gradually come out of hiding when they feel safe, (but) we won’t flip a switch and resume the level of business we left.”

Nikol Slatinska contributed to this story.

The 15 or so MU commencement ceremonies are canceled. A virtual celebration will be held for graduates in May.