The city of Columbia has yet to disconnect anyone’s utilities for failure to keep up with monthly bills, despite recently saying that it would resume disconnections Monday.

For several months, Columbia suspended utility disconnections for nonpayment due to the COVID-19 pandemic. The Water and Light Advisory Board will review a report at its Wednesday morning meeting that indicates there were 7,800 delinquent utility accounts totaling $4.2 million Sept. 21. Those numbers had dropped to 5,486 and $3.34 million by Thursday. 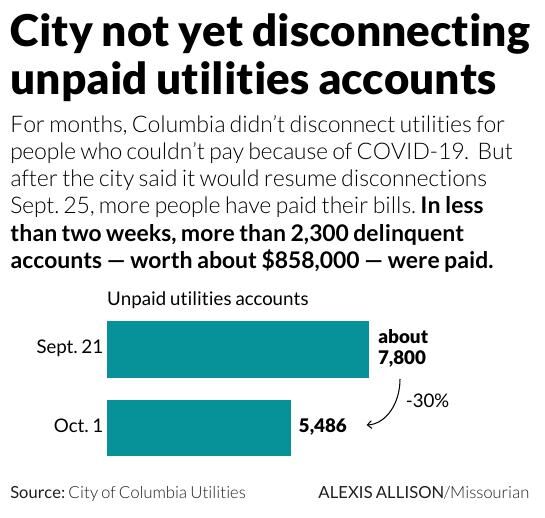 Dave Sorrell, director of the city’s utilities department, told the Columbia City Council on Monday night that just because an account is delinquent doesn’t mean the utilities will be immediately disconnected. The city issues a number of notices before it reaches that point.

Since announcing Sept. 25 that it would resume disconnections, the utilities department has seen a surge of people paying their bills or coming in to set up payment plans.

“We haven’t started disconnecting ... and right now we are seeing foot traffic in the building that’s pretty much at our limit,” Sorrell said. “If we’re getting that many customers that are addressing their bills or making payment arrangements, I personally believe we should hold off on disconnects and see how this continues.”

City Manager John Glascock said the city has to borrow money through the use of bond issues to keep its utility companies up to date and operating. The city cannot afford to default on those bonds, he said.

“We can forgo some of it, but we can’t forgo all of it,” Glascock said of the unpaid bills. “That is what we were doing, forgoing all of it for six months. That’s why we have to start this back up. We owe it to the bond covenants that we take care of our utilities.”

Sorrell noted there is help for families that cannot pay their utility bills. He has received word from Central Missouri Community Action, which has received a grant through the federal Coronavirus Aid, Relief and Economic Security Act to provide utility assistance to those in need.

Residents who are able can also chip in by paying extra on their monthly utility bills.

Mayor Bryan Treece inquired about the possibility of disconnecting businesses’ utilities if they fail to comply with public health directives intended to combat the spread of the coronavirus.

“Right now, you can pull someone’s business license and they can continue to operate. They can’t continue to operate if they don’t have water and electricity,” Treece said. “The city of Independence did the same thing ... I think it’s been very effective in deterrence.”

Third Ward Councilman Karl Skala asked whether there are any businesses that have been noncompliant enough to warrant that level of action. Treece seemed certain there were.

The council took no action Monday night but asked for a staff report so it could discuss the idea further at its Oct. 19 meeting.

Residents are urged to get their accounts in good standing by Oct. 2.