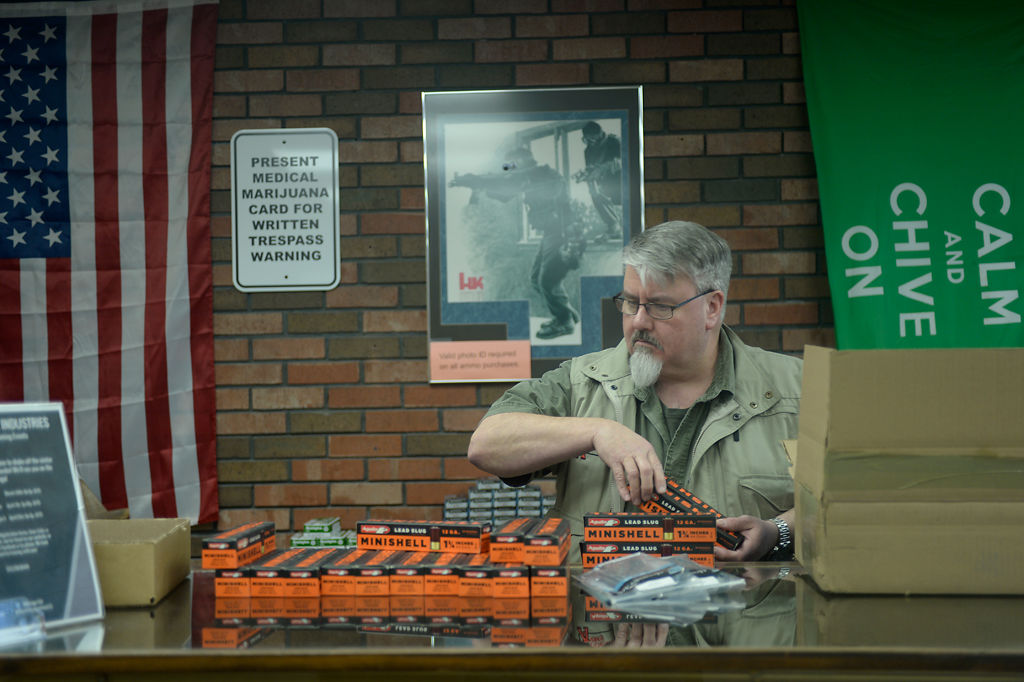 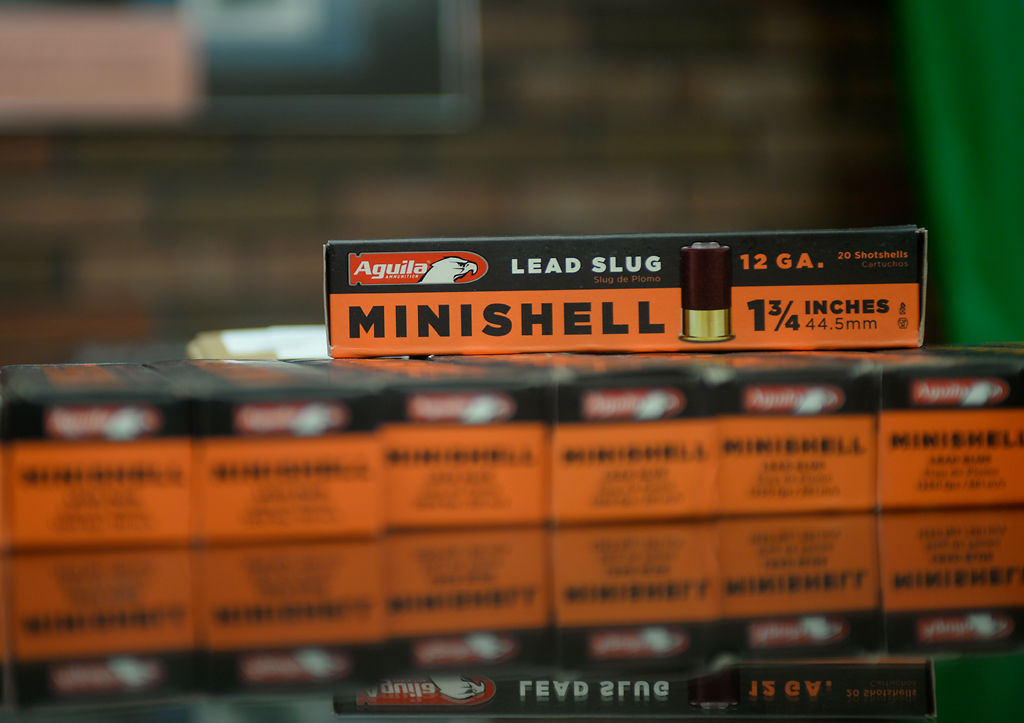 Shotgun shells are displayed on the store counter Wednesday at Modern Arms in Columbia. The gun shop has been open since 2013. 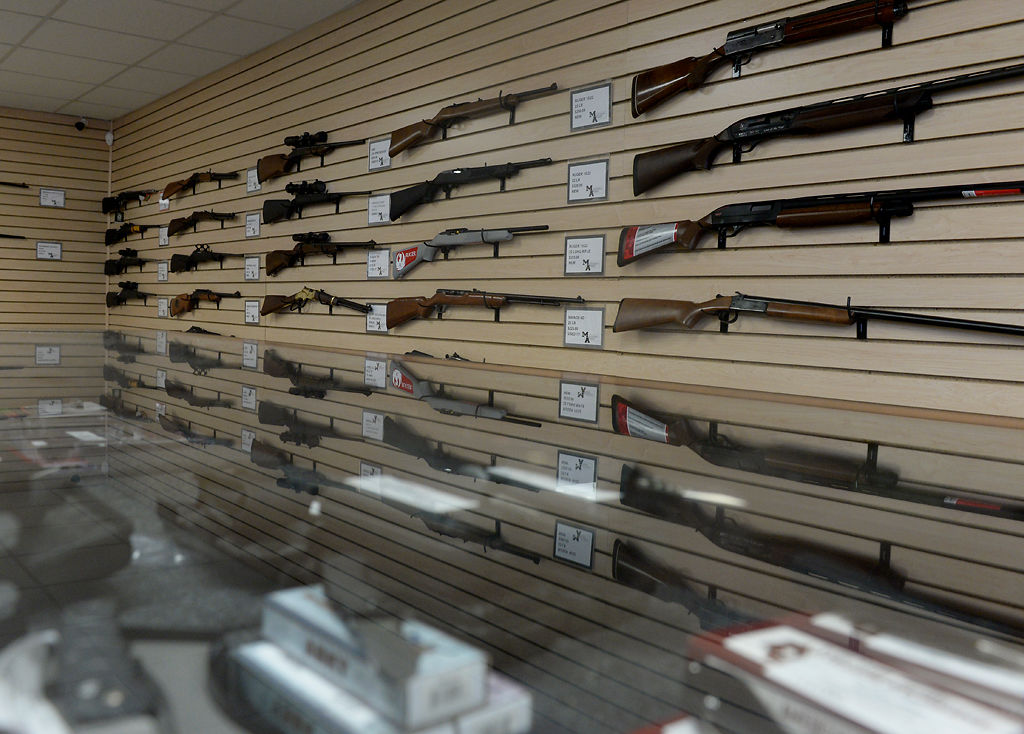 Guns of various types are displayed on the walls of Modern Arms on Wednesday in Columbia. Guns sales have increased since COVID-19 cases began to appear in the state. 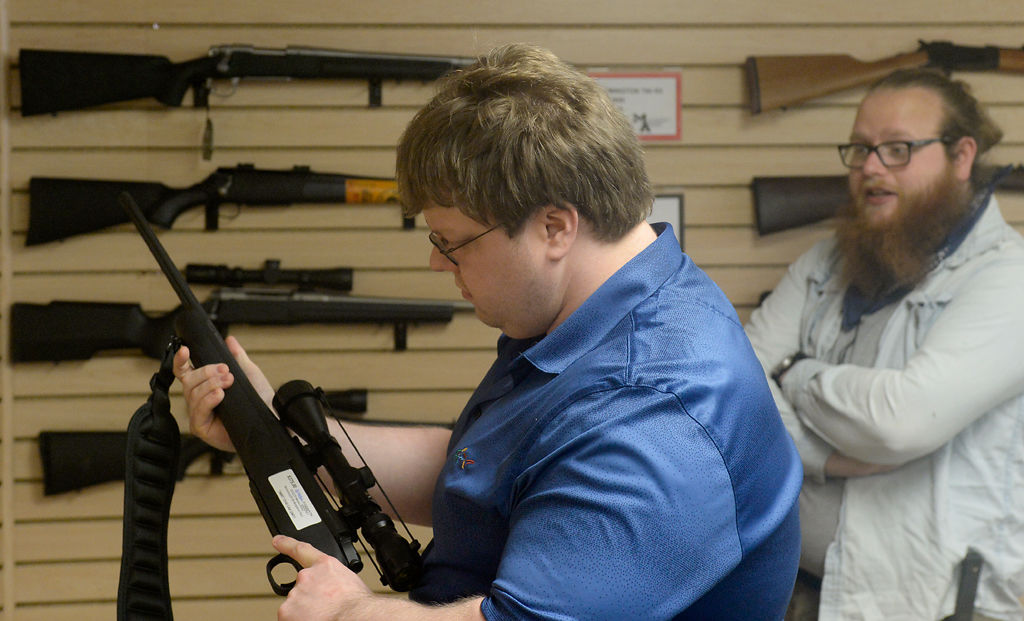 From left, Brandon Sjoblom looks at a rifle as Hunter Wayland explains its aspects Wednesday at Modern Arms in Columbia. Wayland is the son of the owner Larry Wayland and works at Modern Arms. 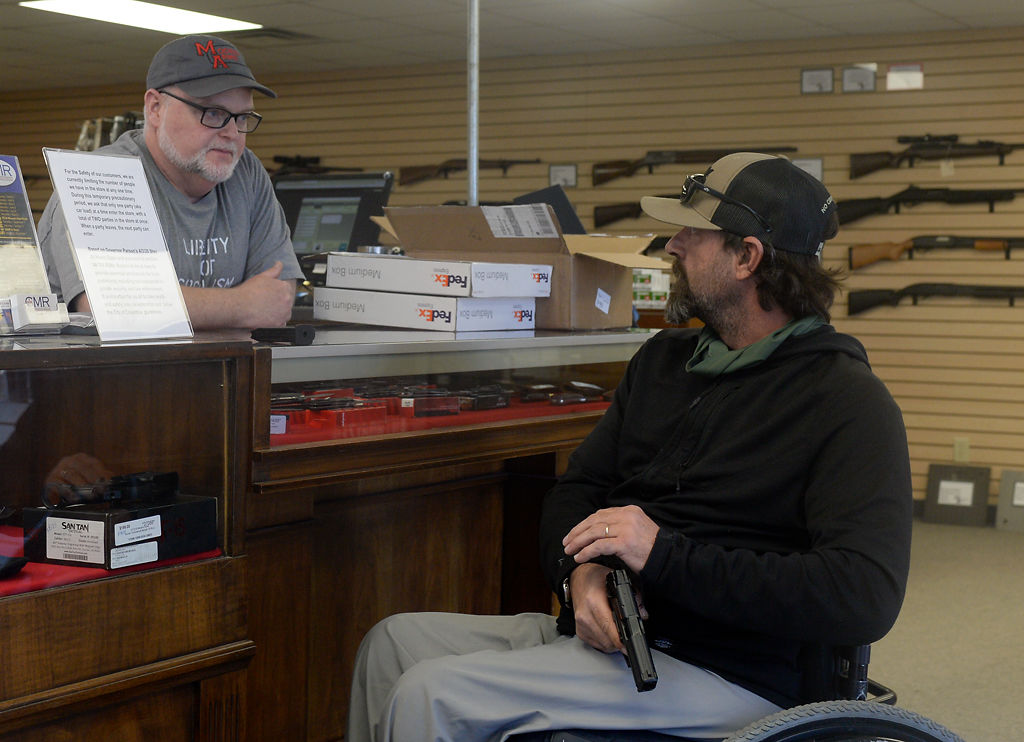 James Hanson, right, checks out a handgun as Larry Wayland talks to him Wednesday at Modern Arms in Columbia. Wayland is the owner of the gun store. 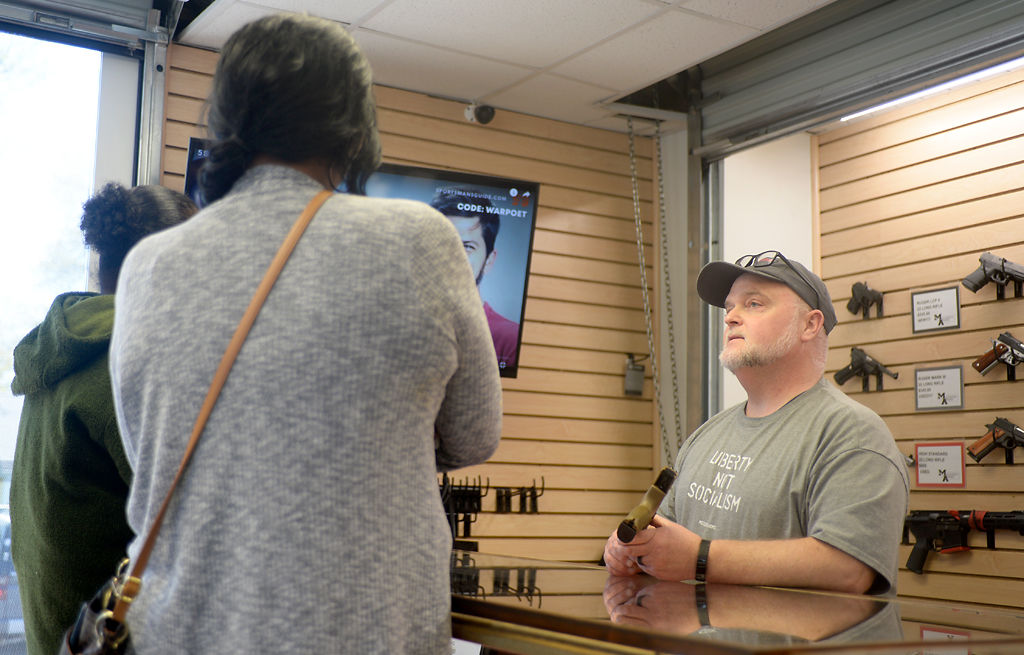 From left, Tierra Lucas and Brook Graves watch a video as Larry Wayland explains ways to learn how to use a gun Wednesday at Modern Arms in Columbia. Lucas and Graves were new to guns and wanted to know more about them before buying one.

Shotgun shells are displayed on the store counter Wednesday at Modern Arms in Columbia. The gun shop has been open since 2013.

Guns of various types are displayed on the walls of Modern Arms on Wednesday in Columbia. Guns sales have increased since COVID-19 cases began to appear in the state.

From left, Brandon Sjoblom looks at a rifle as Hunter Wayland explains its aspects Wednesday at Modern Arms in Columbia. Wayland is the son of the owner Larry Wayland and works at Modern Arms.

James Hanson, right, checks out a handgun as Larry Wayland talks to him Wednesday at Modern Arms in Columbia. Wayland is the owner of the gun store.

From left, Tierra Lucas and Brook Graves watch a video as Larry Wayland explains ways to learn how to use a gun Wednesday at Modern Arms in Columbia. Lucas and Graves were new to guns and wanted to know more about them before buying one.

Larry Wayland paused a phone conversation to greet customers and offer his help. He later interrupted himself again to make sure those outside stayed put because his gun shop, Modern Arms, had reached capacity.

Most businesses are struggling to survive a drop in sales during the COVID-19 pandemic. Firearm retailers are barely keeping up with demand.

Wayland said his store on Brown Station Road has had a 175% increase in sales over last April.

Two hours away in Kansas City, sales at Vincent Lalli’s company, A.T.C. Weapon Systems, have doubled. With national distributors’ inventory dwindling, Lalli said he and his team were, at times, having to update their website’s inventory every 15 minutes.

Al Rothweiler of Mid America Arms in St. Louis said with business quadrupling, he’s had to make marks 6 feet apart on the ground outside, so customers can wait safely spaced.

“When society gets rough, people feel the need to buy firearms,” he said.

The fear the pandemic is creating and the uncertainty of what people may do are driving the firearms sales. With police only responding to life-threatening situations, people want to feel ready to defend themselves, Rothweiler said.

Missouri is part of a national trend. Background checks increased by more than a million last month compared to March 2019, according to the National Instant Criminal Background Check System, which completes firearm background checks for gun retailers.

The system, run by the FBI, was created in 1998, and half of its top 10 busiest days for firearm background checks since its founding were last month.

In Missouri, background checks increased by about 50% in March compared to the previous year, going up by almost 25,000.

The increase in firearm sales is significant, but it’s not unprecedented during times of crisis.

John Ham, the public information officer for the Bureau of Alcohol, Tobacco, Firearms and Explosives Kansas City field division, said sales can increase based on the time of year and societal or political events.

As sales skyrocket nationally, experts worry more guns could trigger an increase in gun violence, especially under the unusual conditions of the pandemic.

Jasmeet Sidhu, a senior researcher at Amnesty International USA, said in a webinar on gun violence and COVID-19 that this is the first time there’s been an increase in gun sales when people were forced to be in close proximity while also in a state of heightened fear.

With limited medical resources and an overburdened health care system, “we really can’t afford any preventable injuries or deaths,” she said.

“Increases in gun sales and ammunition mean more gun injuries and deaths for health workers (to treat) that are already struggling without adequate personal protective gear and resources,” she said.

Ham cautioned against correlating increased guns sales and gun violence because the two numbers can go up at the same time without being related.

“A good portion of the people that are involved in violent crime in our urban areas are not going to the gun stores to buy their guns,” he said.

Missouri has the third-highest firearm mortality rate in the nation, tied with Wyoming. The firearm death rate in Missouri is 21.5 deaths per 100,000 people, according to the Centers for Disease Control and Prevention.

“A lot of the communities that are most impacted by gun violence are also the ones that are plagued with unemployment,” he said during the Amnesty International USA webinar. “We’re really worried about the financial impacts of that and how that desperation might turn into violent acts.”

For African Americans in Missouri, the rate of death from firearm-related injuries is more than three times higher than for white people, according to data collected from 2008–18 by the Missouri Department of Health and Senior Services.

A study published by the Annals of Internal Medicine, the medical journal of the American College of Physicians, discusses how racial inequalities, such as concentrated poverty and residential segregation, contribute to higher levels of firearm homicide among black males of all ages relative to white males.

National firearms distributors, local retailers and even the national background check system are experiencing delays due to the spike in volume.

After business started picking up in February at Modern Arms, Wayland began to contend with delays. Orders that once took two to three days to arrive began taking two or more weeks.

Ammunition and handguns have been particularly hot products for retailers.

Rothweiler, of Mid America Arms, said a month ago he was closing without any handgun ammunition, 9 mm handguns or .40-caliber handguns in the store.

With emptied shelves, Rothweiler said he was waiting at least 10 days for items he used to get easily with next-day shipping.

“Before they suggested the social distancing, we had probably a solid week where we would have 50 to 60 customers in the store at a time,” he said.

Getting in new inventory is not the only delay retailers are experiencing. Wayland is seeing increases in processing time for background checks.

At this time last year, the background check would be cleared within five minutes about 95% of the time. Now, it’s taking 15 to 20 minutes to get a response, and more delays are triggering the three-day waiting period to purchase the firearm.

“We have seen additional statuses of delay where the buying public is held up by three additional business days before they can pick up their gun because the computers weren’t running quick enough to process their request,” he said.

Sidhu from Amnesty International USA said she worries the added volume to the background check system will result in more default sales to those who shouldn’t own firearms.

“If the FBI does not complete a background check within three days, guns stores are allowed to proceed with that purchase, which results in default sales, and the ATF then has to go and seize those guns if they’re in the hands of prohibited purchasers,” she said.

Though Wayland is seeing delays, he said the background checks are still being completed within the three-day window.

Gun retailers say safety is of the utmost importance. Though in-person training is largely limited because of the pandemic, they are advising customers to seek online training sources and to learn about the firearm they’re buying, especially when they’re first-time owners.

From what he’s gathered talking to customers, most are new gun owners, Wayland said.

“They were just concerned that they might have to take responsibility for their personal safety and protection,” he said. “They were curious, and they were looking for solutions that they could get their hands on.”

Ham highly recommends gun buyers sign up for training once life returns to normal. In the meantime, it’s important to secure weapons and record the firearm’s serial number.

“If you’re bringing a gun into the home, certainly for the first time, one of your paramount concerns needs to be the storage of that gun,” he said. “Store it in a place where curious kids or others cannot easily access that gun.”

Missouri had an accidental firearm injury April 10 in Butler County when a 14-year-old boy accidentally shot his 7-year-old brother. The Butler County Sheriff’s Office emphasized gun safety with children at home more because of COVID-19, according to reporting by KFVS12.

Wayland said he talks to his customers about the basics of gun safety, such as treating every firearm as if it’s loaded and never aiming at anything you don’t intend to shoot.

“The instruction you get early on will pay dividends for a lifetime,” he said.