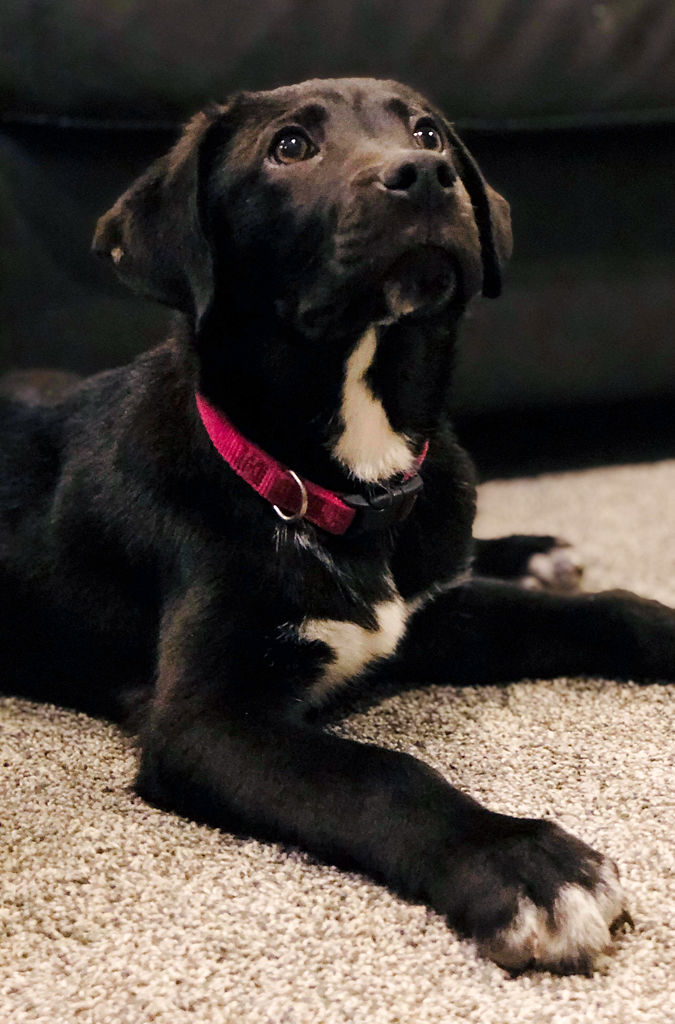 The Mulligan family is taking care of Patrick, a black Labrador mix, until he is adopted. 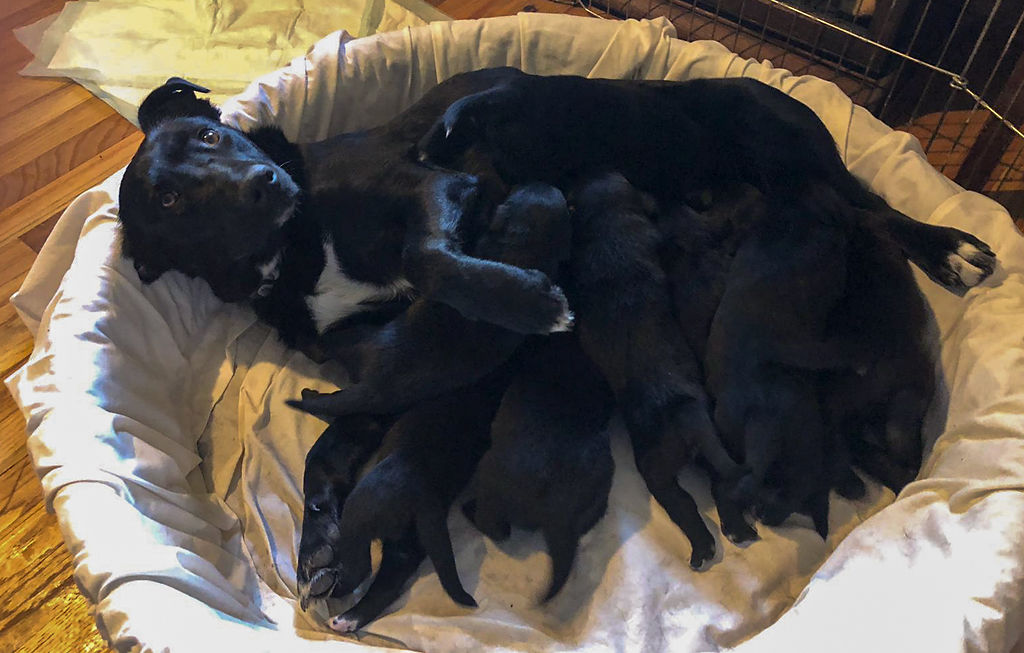 Pepper nurses her nine puppies in a baby pool Wednesday. Jennifer Highbarger is fostering the litter and regularly posts pictures and videos of the puppies online where they are quickly gaining a fan following. 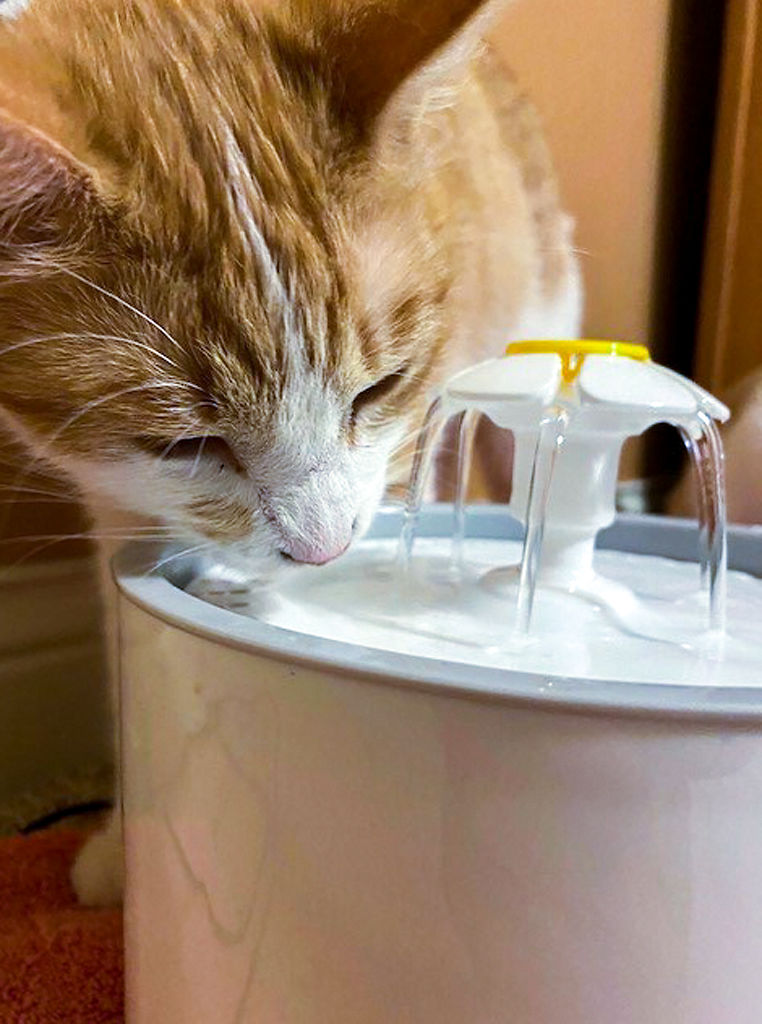 Earvin "Magic" Johnson drinks water Wednesday in Beau Washer's bedroom. The kitten, along with his brother Larry Bird, was adopted by the Washer family this week.

The Mulligan family is taking care of Patrick, a black Labrador mix, until he is adopted.

Pepper nurses her nine puppies in a baby pool Wednesday. Jennifer Highbarger is fostering the litter and regularly posts pictures and videos of the puppies online where they are quickly gaining a fan following.

Earvin "Magic" Johnson drinks water Wednesday in Beau Washer's bedroom. The kitten, along with his brother Larry Bird, was adopted by the Washer family this week.

Confined to her house in the midst of a pandemic, Jennifer Highbarger made the decision to foster a litter of nine puppies and their mother, Pepper.

Their meetup was arranged by Second Chance, a private animal rescue organization based in Columbia.

“During this time of, you know, panic and unknowing, it’s just really nice to be able to go in and sit with them and look at them,” Highbarger said.

As people transition to a strict home environment, animal shelters are seeing an encouraging uptick in both fostering and adopting abandoned pets.

Second Chance received more than 30 applications in the last week, according to Giulia Hall, operations director.

“This is phenomenal, as our average is about one application a week, sometimes less frequent,” she said. “We are blown away by the support.”

In a rather bleak period of social isolation, it’s a win-win, Hall said.

“I think it benefits both ways. It benefits us that they’re wanting to help, and it benefits them, I think, their morale, kind of, during all of this,” she said.

“If people can’t afford to donate regularly, then the next best thing is to foster or adopt because we are still taking dogs in,” said founder Melody Whitworth.

As a Columbia Public Schools employee, Highbarger said she usually only has time for her own two dogs. She’s now home with a college-age son and daughter, who are helping care for the 3-week-old puppies until more permanent families can be found.

Highbarger posts puppy pictures on Facebook, which have gained a steady fan following. And she has found support in a text group with a veterinarian and an experienced puppy foster mom, all willing to answer her questions.

“We thought, ‘Well, this will be great. We will all be home to give them lots of attention and be able to enjoy them,’” she said about the decision to adopt the brothers.

Having a pet around is also helping people cope with the loneliness of limited social contact.

“I’m kind of lonely by myself working from home, and I have a compromised immune system, so I can’t really get out and about a whole lot,” said Morgan Hickam, who lives in Boonville.

“So I thought, what better way than to help a dog and help myself?”

Hickam is completing the legal paperwork to be the foster caretaker of Buddy, a white Great Pyrenees, currently sheltering at the Unchained Melodies Dog Rescue.

“I think it would have been hard to be at my house by myself, all the time,” she said.

Donovan said the most intriguing aspect of understanding her new cat’s behavior is figuring out his favorite playthings.

“I dropped a water bottle cap on the floor, and he kicked it all the way across the living room, and his eyes lit up,” Donovan said with a laugh.

For Holly Lynn Mulligan, her husband and toddler, their relationship with a black Labrador mix named Patrick has been sweet but short. They’ve fostered him for just a week, but now need to let him go.

“We thought while we were home quarantined, this would be a perfect opportunity to help out,” Mulligan said via Facebook Messenger. “My little girl was also needing a friend.”

However, on Wednesday, the Central Missouri Humane Society told Mulligan that someone had filled out an application to adopt the dog.

“We really enjoyed having him, so we’re feeling very bittersweet,” she said.

There is a lot of news about the novel human coronavirus-19. We are rounding up the latest in an email newsletter. Subscribe today.