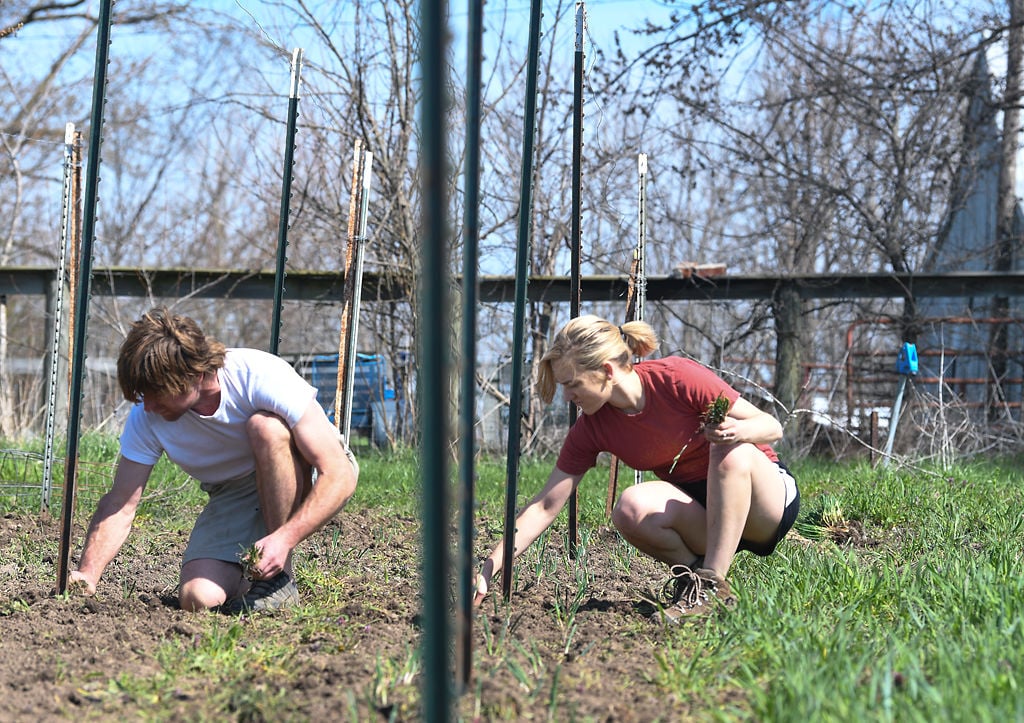 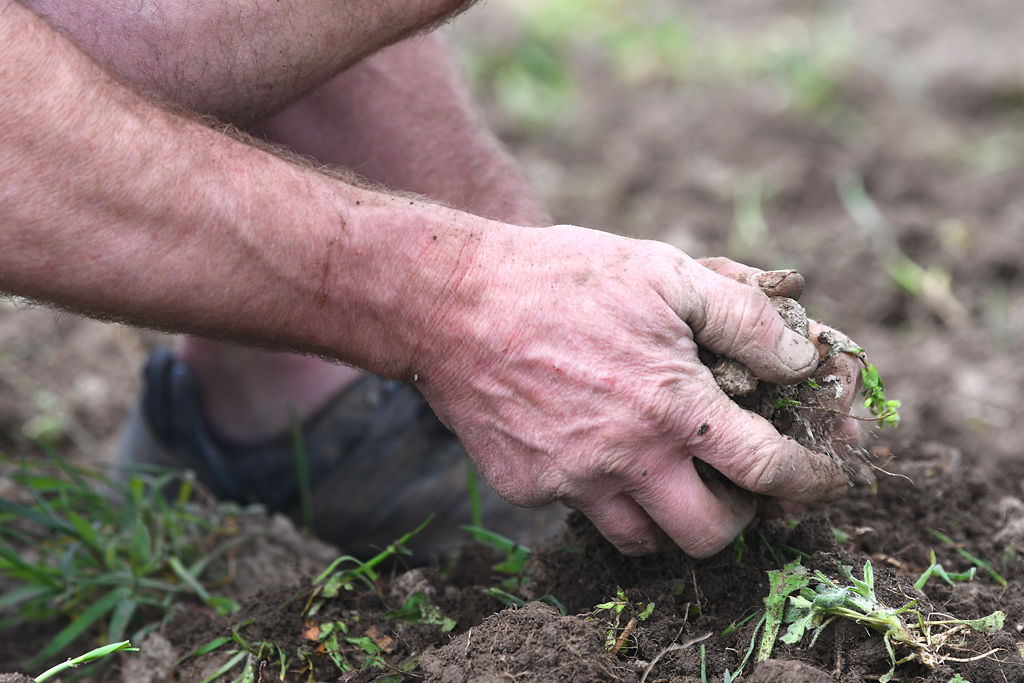 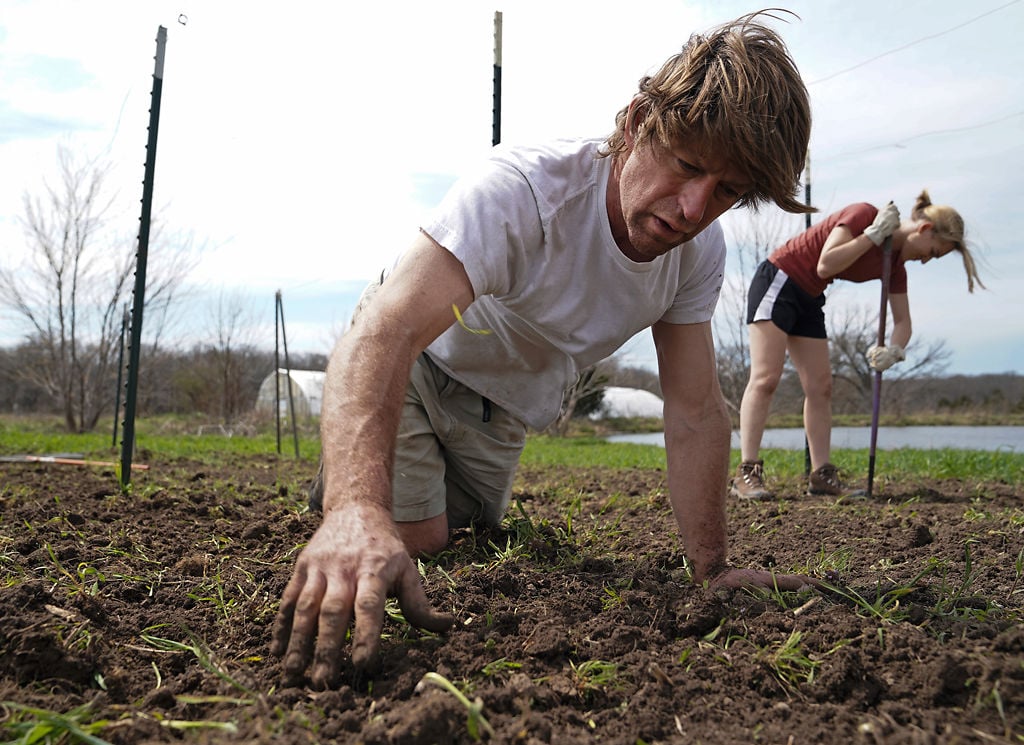 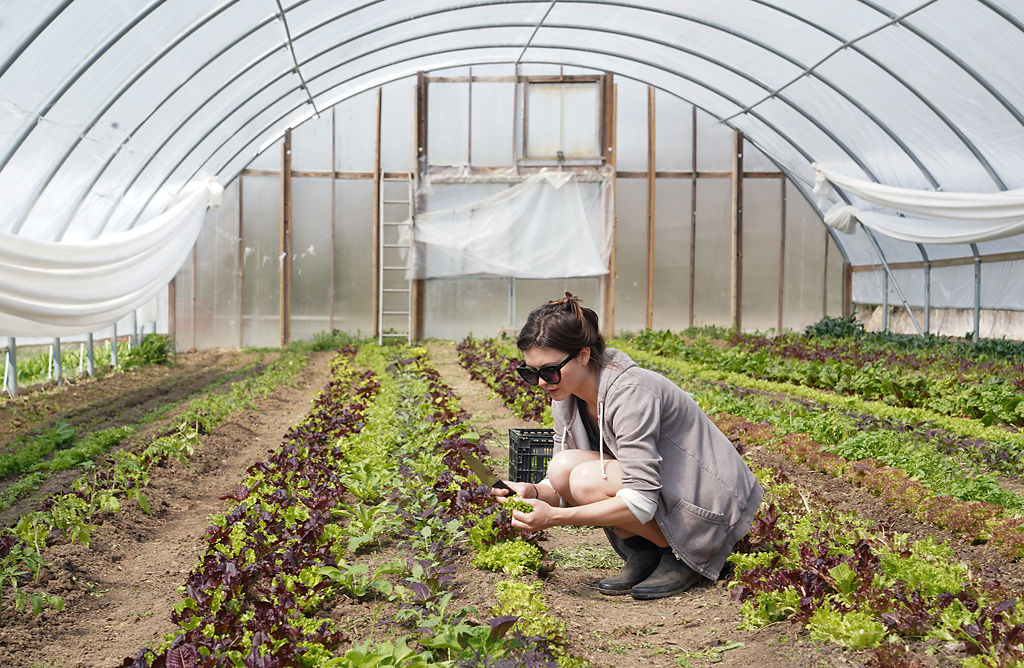 Michaela Cash picks lettuce Thursday at the Terra Bella Farm greenhouse in Auxvasse. “We used to sell them (lettuce) to restaurants, but now we sell to individuals,” Cash said about the impact of restaurant closures.

Michaela Cash picks lettuce Thursday at the Terra Bella Farm greenhouse in Auxvasse. “We used to sell them (lettuce) to restaurants, but now we sell to individuals,” Cash said about the impact of restaurant closures.

Walker Claridge is trying his best to supply local ranchers, farmers and vegetable growers with an income during a global pandemic.

As the owner of the farm-to-table restaurant Broadway Brewery, he typically buys products from local farmers. But stay-at-home orders and increasing social distancing policies due to COVID-19 have changed Claridge’s business. As a farmer himself, he’s also navigating how to sell 60 to 80 pounds of vegetables and greens a week to his regular buyers.

“People are freaked out, and understandably so,” Claridge said. “And they’re looking for different ways to access the products that they need, and we’re trying to meet that demand, help them through this time and continue to be able to operate as a business.”

As channels to sell products — like farmers markets — close, local and regional food markets could see up to a $688.7 million decline in sales and up to a $1.32 billion overall economic loss, according to an analysis by the National Sustainable Agriculture Coalition.

The analysis warns that if no action is taken, the country may lose many “small, socially disadvantaged and beginning farms and the important markets they serve.” The federal government has recently enacted some relief programs, but it’s unclear how much that will help at the local level.

Sarah Low, an associate professor of agricultural and applied economics at MU and a contributor to the report, said the estimated losses are only through May. But if social distancing measures continue past that time frame, losses would grow accordingly.

For example, farm-to-school markets, which typically pick up in the fall, could also take a beating: Low said if schools don’t open back up in August when there’s a lot of produce available and opportunities for agricultural education, farm-to-school programs will suffer greatly.

Farmers markets are one of the biggest potential targets of the local and regional food scene, Low said. Approximately 3,600 Missouri farms sell their products through such direct channels, Low said. A drop in sales could lead to farmers markets closing and also influence decisions on the farm.

“It’s also possible that some producers may say, ‘Well, if the market isn’t going to be open’ or if there’s a lot of unknowns, they may not even plant,” Low said. “So, we could be looking at markets and vendors closing for the season, or potentially even permanently.”

Ultimately, a lot is up in the air, as farmers markets are trying to be nimble and respond to a changing situation. Low said the analysis estimated a 10% to 25% loss, but there have been many variants.

Since the release of the report, she said she’s seen an increase of farmers markets moving to a drive-thru or online marketing format.

She said social media is a great way to get the word out about changes like drive-thru pickup. Missouri and other states have also designated farmers markets as essential businesses.

MU Extension is working with a couple different markets that are trying to come up with an online platform, Low said. Some markets may be affected less than those without broadband in rural areas.

Corrina Smith, executive director of the Columbia Farmers Market, said while the market saw a decrease in attendance at its spring kickoff, it is adapting to the changes caused by COVID-19. Now, the market is providing curbside pickup and a pre-ordering system. About 25 to 30 vendors sold products last week, Smith said.

“The few that used it last weekend, it was very easy, at least on our end,” Smith said. “You know, we met customers on the curb. We have their products, and they pop their trunk and off they went.”

There are still obstacles, she said, from getting vendors online and getting inventory product and pricing lists to creating an online purchasing platform because some vendors don’t take credit cards. Smith said staff have been regulating crowds and have put safety measures in place, and she encourages people to buy from the market if they feel comfortable at a grocery store.

“We are an outlet for local producers to sell their food to our community,” Smith said. “And we feel that is such an essential part of our local food system and our local economy. And, you know, just having reliable access to food is ... so critical right now.”

Farmers like Claridge are also adapting to the changes. Instead of selling his greens to restaurants, he’s bagging them up and selling them directly out of the brewery when customers pick up their food. Claridge also plans to apply for aid through the U.S. Small Business Administration.

“I think access — ability to access the products — is going to be the real struggle for everybody here in the next few days as this whole COVID-thing heads down the pipeline, and it could get worse before it gets better,” Claridge said. “So we really need to be thoughtful and start thinking through how we’re going to be able to deliver these products and these services directly to the consumer in a safe way.”

Since the economic analysis was released March 21, the federal government has stepped in. As part of the $2 trillion Coronavirus Aid, Relief and Economic Security Act, $9.5 billion went to the Department of Agriculture to financially help farmers growing specialty crops, producers who supply local food systems like farmers markets, restaurants and school. It also specifically allocates money for livestock producers and dairy farmers. An additional $14 billion has been directed to the Commodity Credit Corporation, a funding mechanism for agricultural programs like price loss and dairy margin coverage.

Spencer Tuma, director of national legislative programs for the Missouri Farm Bureau, said the USDA has not written guidelines about how the money is going to be sent out but anticipates that the majority of farms in Missouri would be able to take advantage of the funds when available.

Tuma said this financial help is important because of the state of the agricultural economy.

“A lot of farmers are operating on thin margins,” Tuma said. “In the short term, we have people who, of course, have their taxes coming due, maybe they have operating loans coming due as well. So we hope that that cash will help them in the short term be able to continue their operation while we hopefully look for a rebound down the road.”

Tim Gibbons, spokesperson for the Missouri Rural Crisis Center and Patchwork Family Farms, said family farmers in rural America are always operating on thin margins. And because of COVID-19, things are even worse.

Gibbons said he thinks farmers who sell into the commodity and local markets need support. He said U.S. Secretary of Agriculture Sonny Perdue has a “moral imperative” to give the aid money to family farms instead of large agricultural corporations.

“We’re seeing local markets right now disintegrating because of restaurants closing down, lack of access for people to get family farm meat,” Gibbons said. “So I think there are two different things that we need to think of, not only like the general marketplace that farmers sell into, but also the local marketplace. And farmers on both angles are struggling.”

Limits on how much grocery customers can buy, coupled with school and restaurant closings, forced some farmers to dump milk.