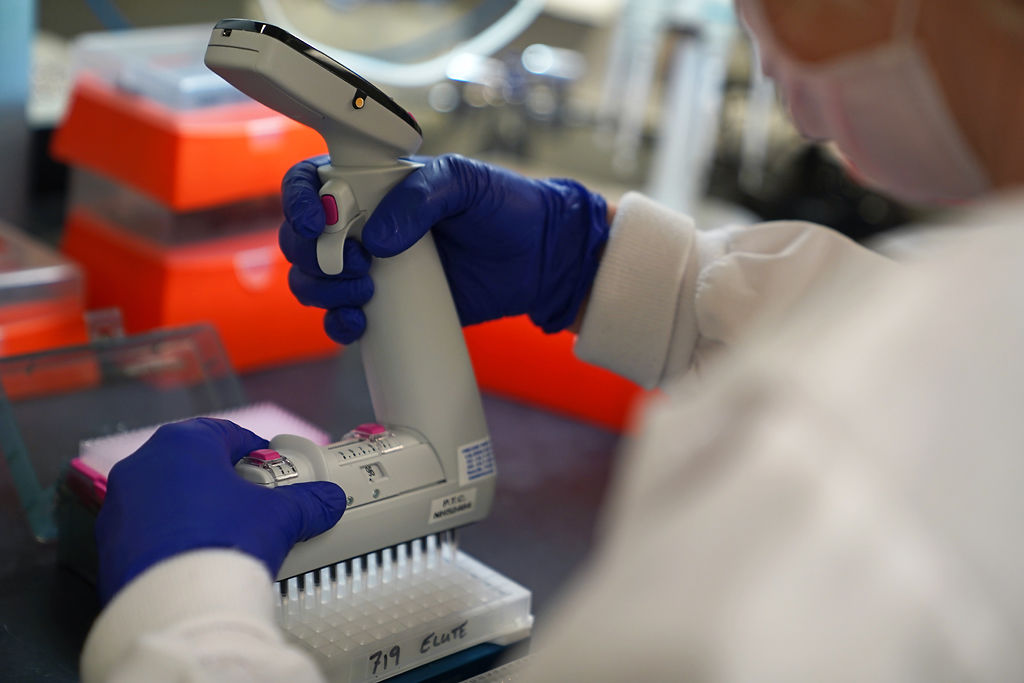 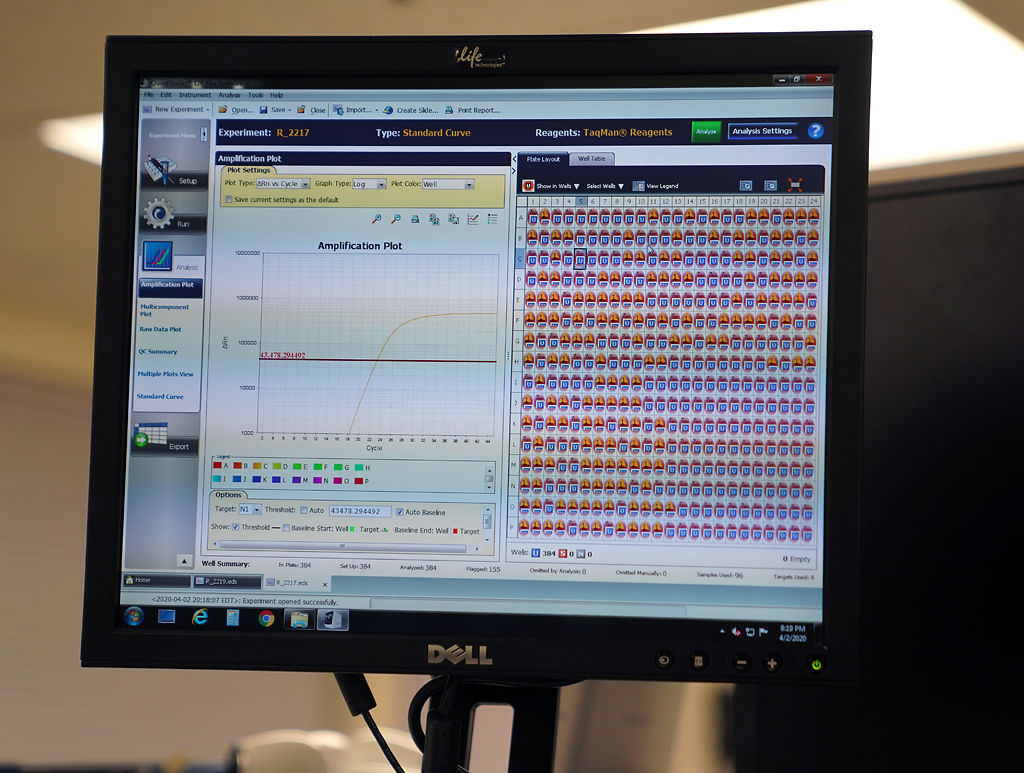 The real-time PCR amplification curve on a Quant Studio 12K Flex instrument shows a positive COVID-19 sample Thursday at the PTC Laboratories in Columbia. When the curve exceeds the red baseline, the testing result is positive.

The real-time PCR amplification curve on a Quant Studio 12K Flex instrument shows a positive COVID-19 sample Thursday at the PTC Laboratories in Columbia. When the curve exceeds the red baseline, the testing result is positive.

Michelle Beckwith, co-founder of PTC Laboratories, usually wakes up at 5:30 a.m. and is at the lab by 7. She and her team finish off whatever sanitation work was left over from the day before and assess the day ahead. The first batch of tests is at the front door by 7:30.

PTC and its clinical division, Genetrait, have carved out a niche in genetics, confirming familial relationships and factors that impact patient drug therapies. Before a legal change of name in 2016, PTC stood for “Paternity Testing Corporation.”

But these tests aren’t for drug therapies or familial reconstruction. They’re for COVID-19.

As of today, Genetrait is processing about one in every five COVID-19 tests statewide. The lab was able to expand into COVID-19 diagnostics testing overnight.

Genetrait is one of many companies across the state that is upending its business model to join the fight against COVID-19.

“We realized pretty quickly that there was going to be a capacity issue in the local area and just said, ‘Hey, we’ve got the equipment; you guys want to come use it, it’s here,’” she said.

It was an easy pivot. The same technology underlies many different forms of genetic testing.

The idea is simple: Try to replicate DNA and see what happens.

Lab technicians attempt to extract COVID-19’s RNA from a sample of human cells collected with a test kit. If present, that RNA is then converted to DNA.

The DNA derived from the virus’s RNA will be mingled with human DNA at first. In the experiment’s design, lab technicians can simply target COVID-19’s DNA and ignore the human DNA. If the virus is present in the person’s cells, the virus’s DNA will begin to replicate.

Genetrait’s marketing director, Tim McCarty, said that its laboratory turnaround is 12 to 16 hours depending on when tests arrive at the facility. Samples that arrive in the morning and early afternoon are typically reported within six to 10 hours, Beckwith said. Genetrait is processing hundreds of tests on a busy day.

Genetrait is just one example of how the private sector has been turned on its head by this disaster. Companies statewide are rapidly retooling in order to tackle the global pandemic.

Breweries and distilleries across the state, including Anheuser-Busch, have dedicated some resources to manufacturing hand sanitizer, according to a news release from the governor’s office.

Meanwhile, industrial supply companies are working to acquire personal protective equipment for medical workers. K&K Supply, a construction company, is working with the State Emergency Management Agency to procure N95 masks, according to the news release. Barry Orscheln, CEO of Orscheln Farm and Home, is collaborating with clothing giant Carhartt to produce gowns and surgical masks.

Meanwhile, unemployment figures for Missouri are skyrocketing. From the week ending Jan. 4 through March 14, about 53,000 unemployment claims were filed. Since March 14, more than 339,000 have been filed.

Many companies haven’t been able to adapt to the changing economic landscape. Nearly 7,500 Missouri residents have been let go because of mass layoffs and closings alone after Gov. Parson declared a state of emergency March 13, according to the Missouri WARN Notices website. Before the announcement was made, just 162 had been laid off because of closings since the beginning of the year.

There are currently plans to let go of another 1,829 people, though about 1,000 were planned to be let go before the state of emergency.

Genetrait is an exception to the moment. So far, the company has been able to withstand the economic downturn; no layoffs are currently planned.

According to McCarty, 20 people are staffing the facility 12 hours a day to meet demand. Genetrait has developed a partnership with MU, which has “supported this effort 100% from the very beginning,” Beckwith said. The company is considering moving to 24-hour operations if needed to meet demand for testing.

This isn’t the first time Beckwith and PTC have worked on a disaster. In 2006, Beckwith headed up efforts to identify the remains of victims of Hurricane Katrina using DNA.

After Katrina, there was a national push to establish disaster preparedness plans, Beckwith said. Plans for any particular disaster will never be perfect, “but at least if you’ve got a place to go back to all the lessons learned, you can at least improve every single time,” she continued.

Fifteen years later, Beckwith and her team are working to address another disaster altogether. The parameters are vastly different this time. Victims’ identities are already known; determining who is a victim in the first place is the goal.

“I’m sure there will be a lot of lessons learned that come out of this, and our disaster preparedness plans will change over this,” Beckwith said.

There is a lot of news about the novel human coronavirus-19. We are rounding up the latest in an email newsletter. Subscribe today.