The MU Faculty Council approved a resolution opposing the outsourcing of custodial and landscaping jobs Thursday, standing with nearly 1,000 students, staff and faculty who signed a letter opposing the potential plan by the university.

The council also discussed several issues surrounding the return of students to campus this fall as the semester draws closer. Many of the specifics behind MU’s fall semester plan have not been made public. The university plans to release details next week, MU spokesperson Liz McCune said. In-person classes are scheduled to resume Aug. 24.

How class attendance will be handled is still uncertain, said Academic Affairs Committee Chair Daniel Cohen, and it “hasn’t been properly addressed by administration.” State requirements on how much faculty and students must interact complicate attendance policy, and any decisions made on the matter also have implications for financial aid and various groups of students, he said.

Council members voiced common concerns about MU’s potential plan to accept an outside vendor’s bid to contract out about 280 positions, weighing the financial and human impacts of the decision.

“It seems like this could be a short-term financial solution for the crisis but will have a long term impact on the people,” said Anand Chandrasekhar, who sits on the council’s Inclusion, Diversity and Equity Committee. “At some point we have to take care of people, too.”

Chandrasekhar said he and others repeatedly asked the university for demographic information on the employees whose jobs would be contracted out under the plan, to no avail. The letter submitted to Interim MU Chancellor and UM System President Mun Choi this week said many are Black and Latino.

The council’s IDE committee has also been “discussing issues” surrounding the Thomas Jefferson statue on campus, according to committee chair Rebecca Graves. Choi and the UM System Board of Curators said the statue would remain despite student protest.

“This issue is not going away,” Warhover said. “There needs to be some urgency around this and a lot more conversation. ... I don’t think students are going to let it die anytime soon, and I don’t think it should.”

One possible action from the council’s committee would be a resolution supporting a statement from MU’s Black Faculty and Staff Organization. Members sent a letter to campus leaders stating “the Jefferson statue must go,” pushing back on the idea that removing the statue would “remove history,” as Choi has said.

“The MU BFSO (Black Faculty and Staff Organization) wants MU leaders to move the statue from campus and work with the university and surrounding community to atone for our painful past,” the letter stated. 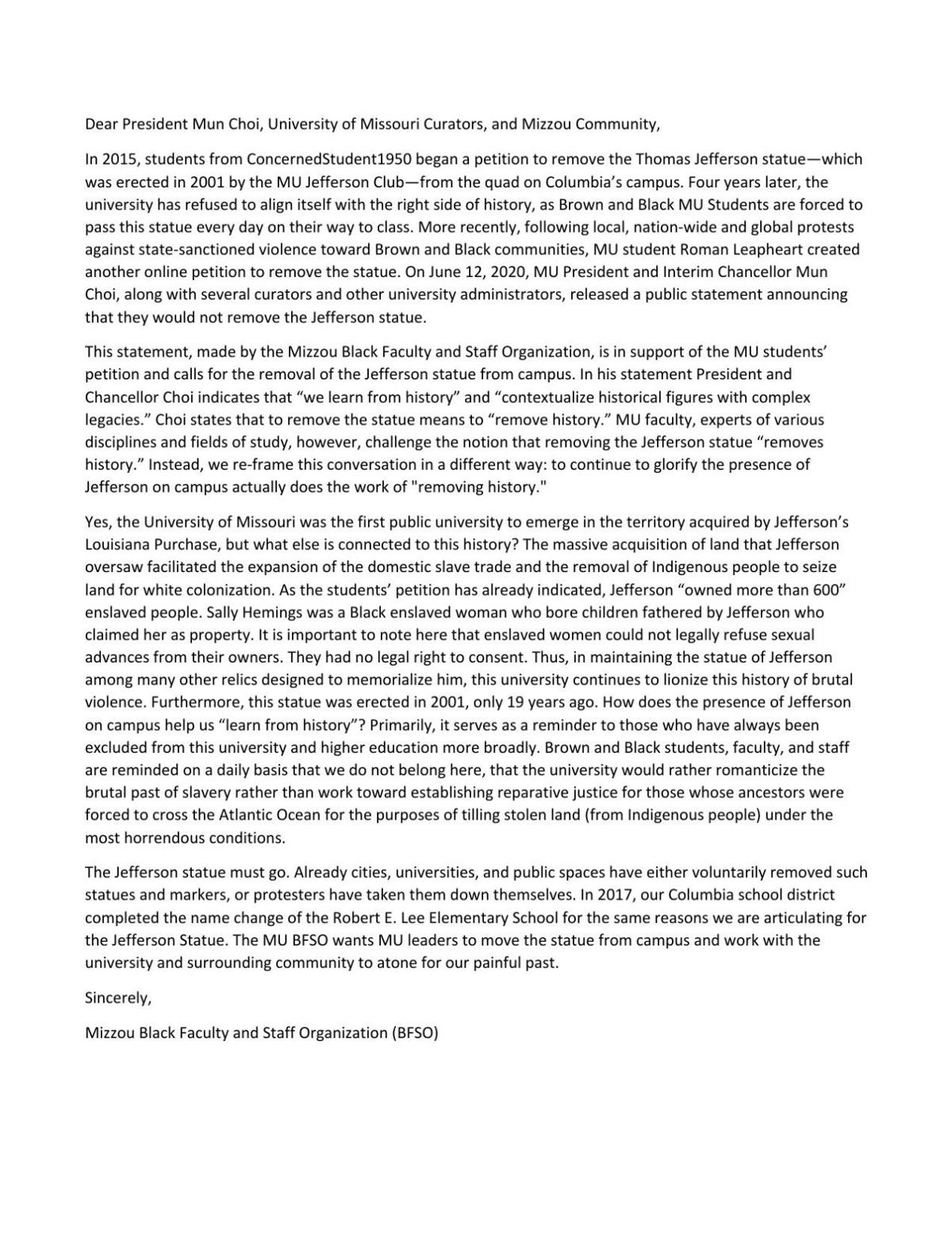 Choi responded to the organization’s letter in an email Tuesday.

“I appreciate you taking the time to thoughtfully share your perspective about the Thomas Jefferson statue,” Choi said. “As you can imagine, I have received substantial feedback before and after my decision, and that input has represented a vast spectrum of opinions. Though this decision has been made, we remain focused on finding the best ways to recognize our racial history and, as your statement requests, to ‘atone for our painful past.’ The conflict this statue embodies offers our campus the chance to do so. I hope you will join me in this effort.”

Another council member encouraged further discussion from the group on broader issues of race on campus.

“Black students are concerned that when they come back (in August) everything is going to be the same,” said Zandra de Araujo, who sits on the council’s Academic Affairs and Research, Scholarship and Economic Development committees. “Black students have been organizing, conscious of what is going on, and expect actions to address the concerns they’ve brought up.”

Her comment resulted in little further discussion on the topic, but members said they would discuss the matter outside of the meeting.

A report from the American Council on Education said MU had made strides on diversity and inclusion, but more can be done.