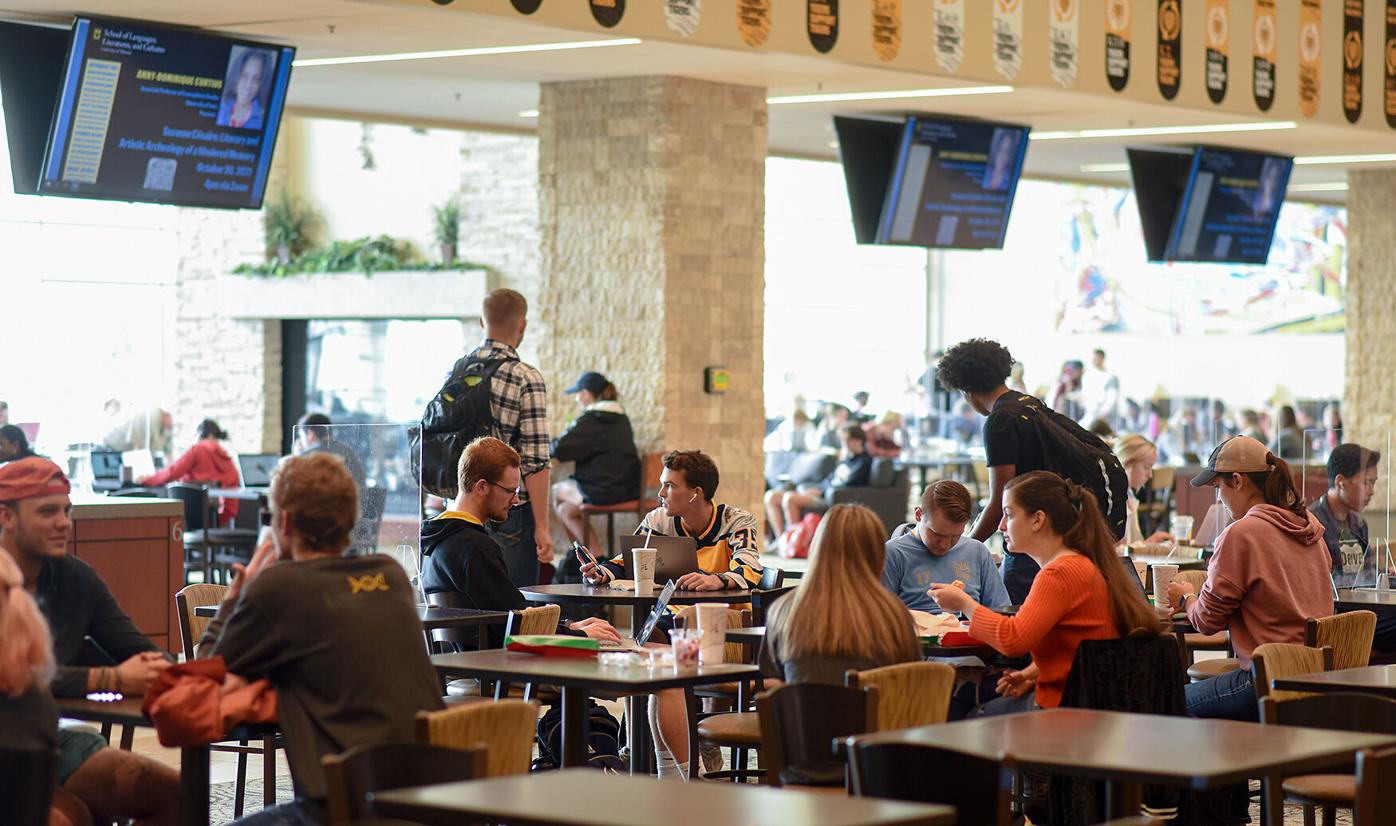 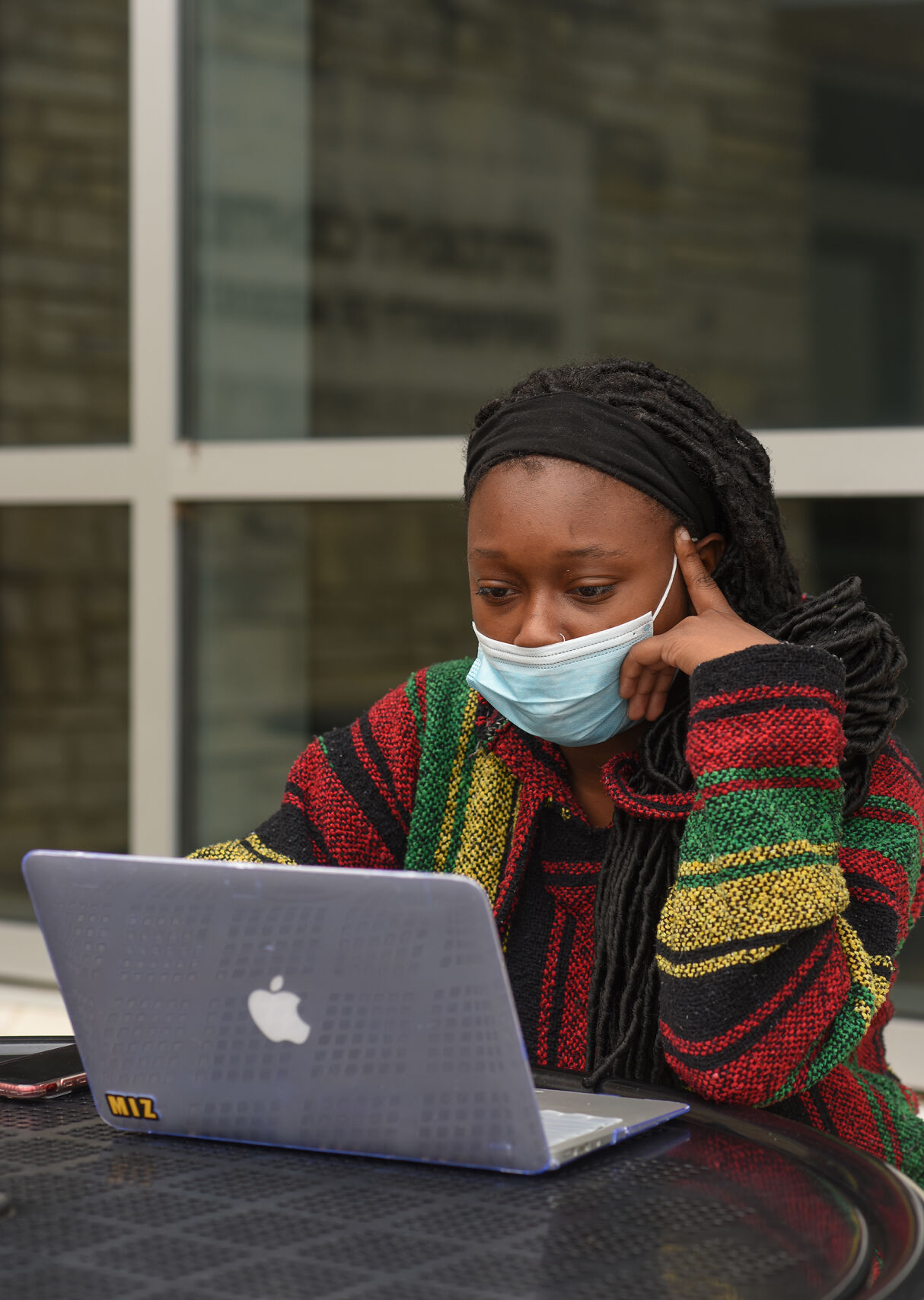 Jessica Peterson studies outside the MU Student Center on Thursday in Columbia. 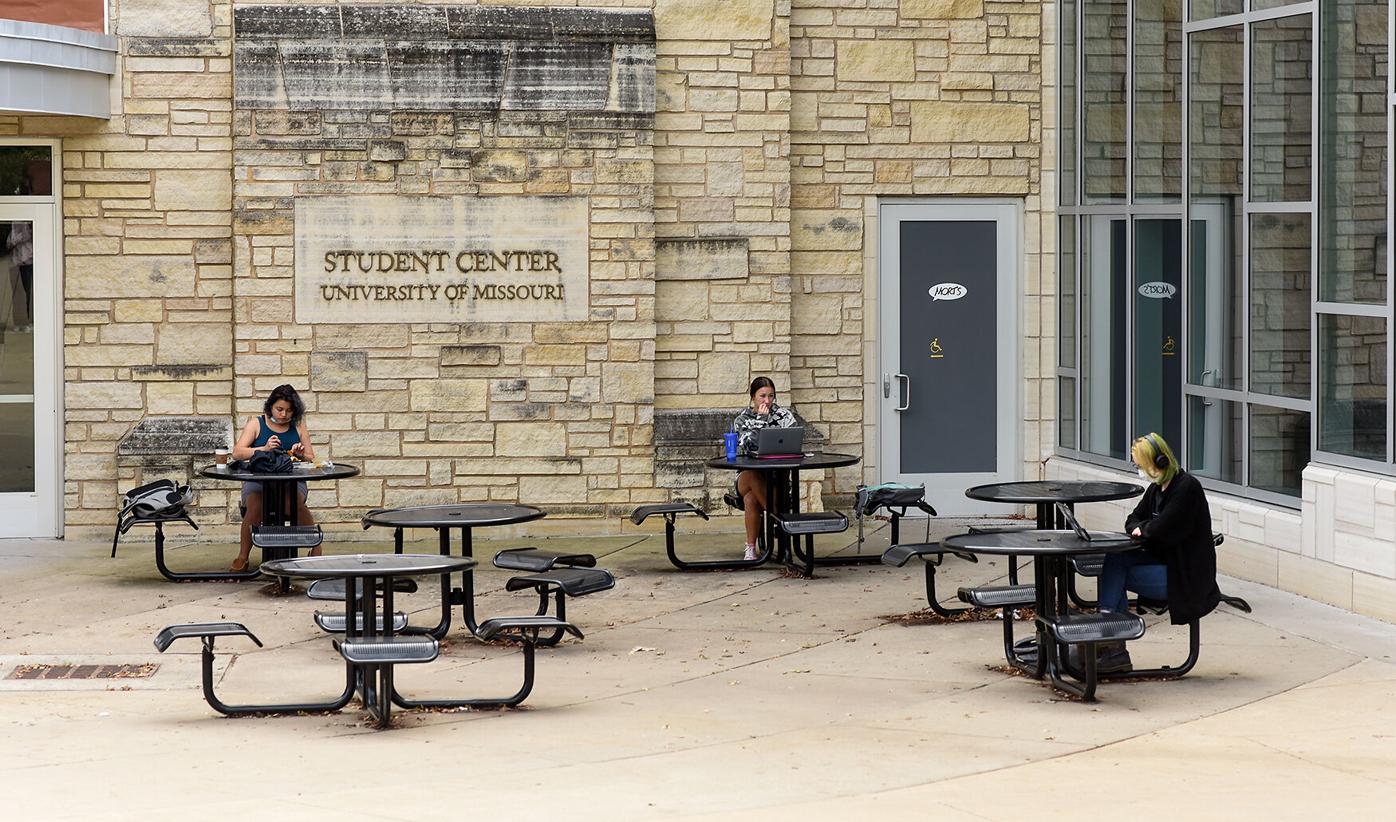 MU students sit socially distant outside the MU Student Center on Thursday in Columbia. “Masks are still going to be recommended in the classroom, and faculty members can definitely ask their students to wear masks," MU spokesperson Christian Basi said. “However, they cannot require them nor can they assess any kind of penalty to a student for not wearing them.” 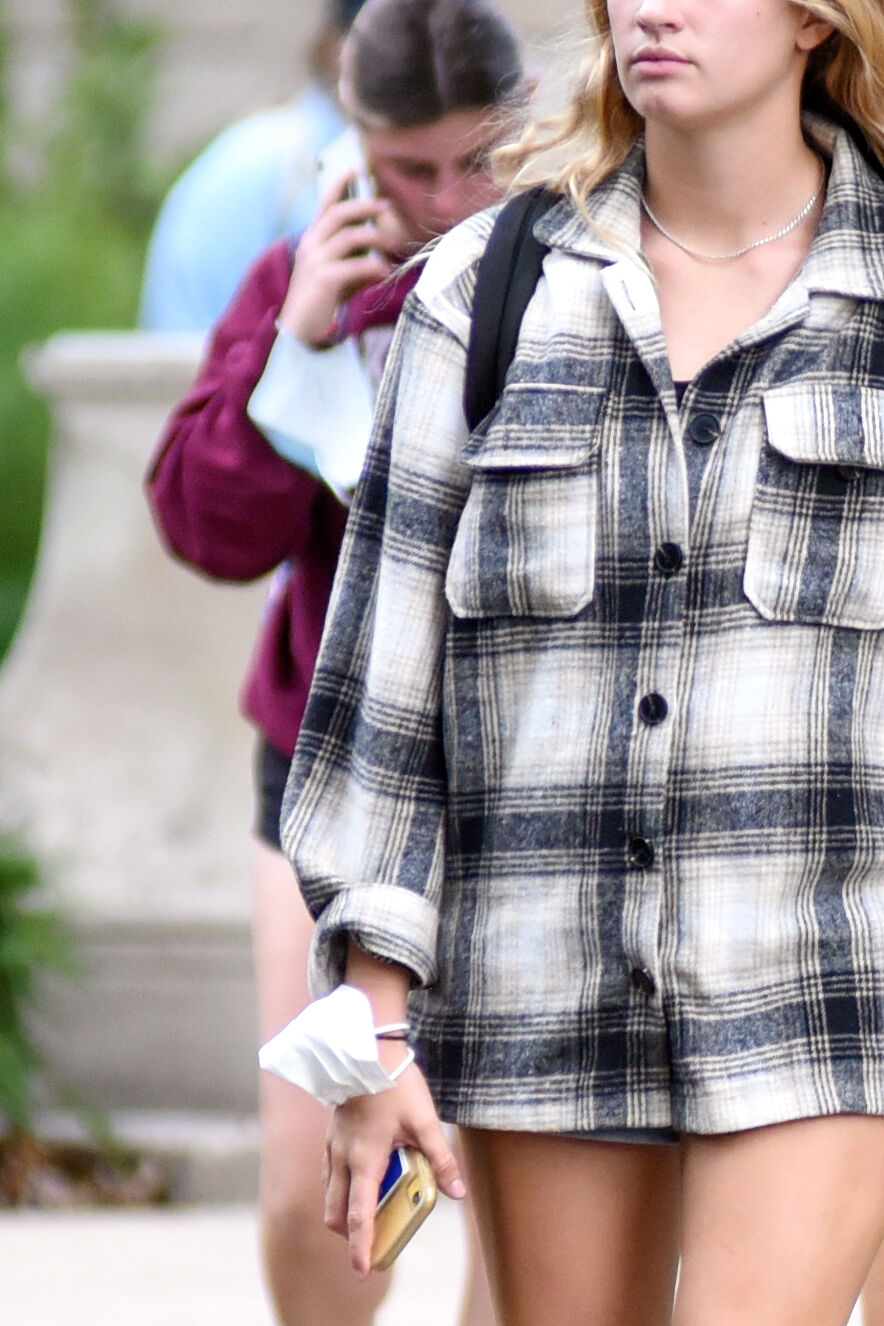 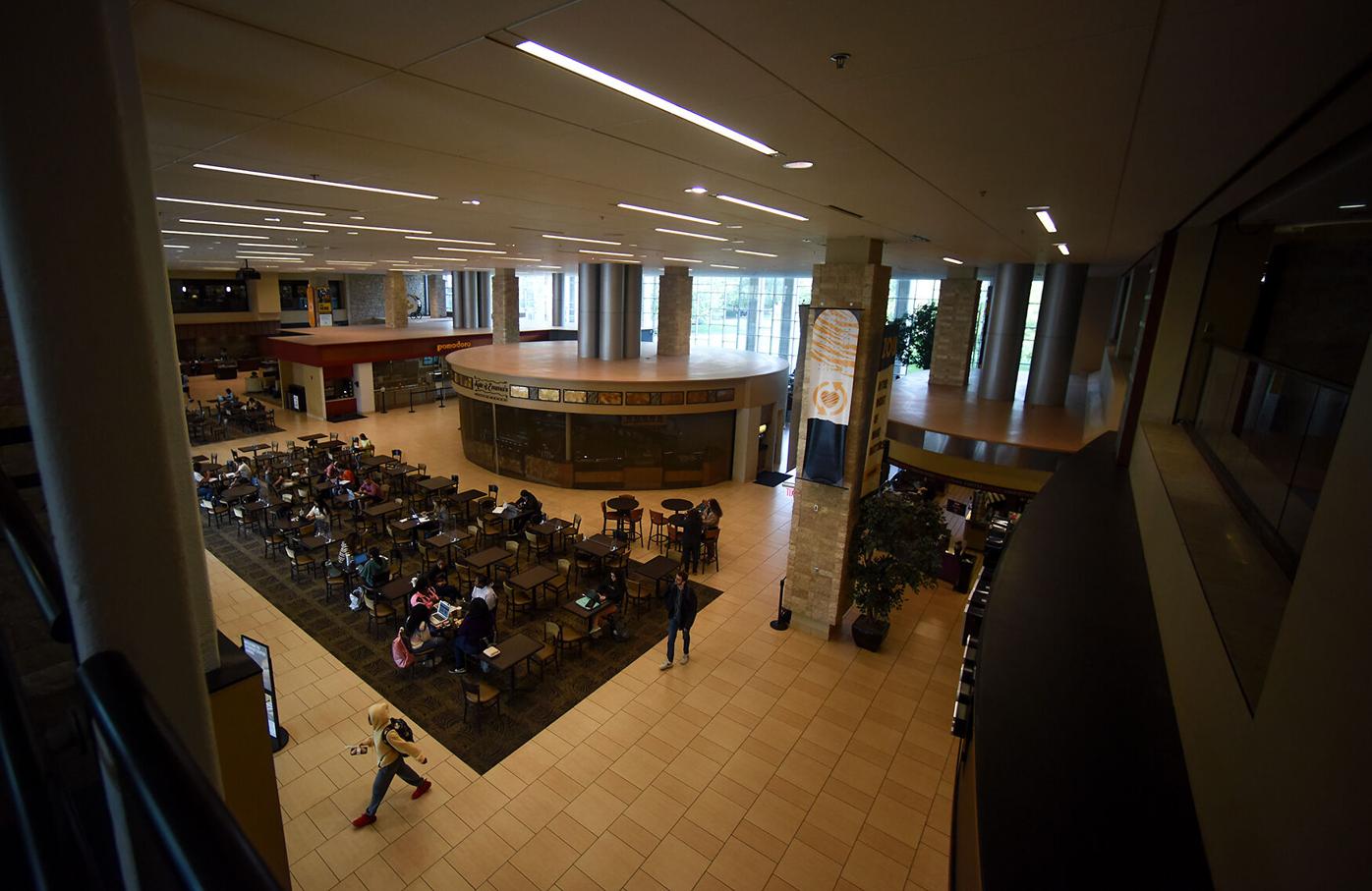 A student exits the MU Student Center on Thursday in Columbia. COVID-19 vaccines can be scheduled via appointment at MU Health Care or with the city of Columbia.

Jessica Peterson studies outside the MU Student Center on Thursday in Columbia.

MU students sit socially distant outside the MU Student Center on Thursday in Columbia. “Masks are still going to be recommended in the classroom, and faculty members can definitely ask their students to wear masks," MU spokesperson Christian Basi said. “However, they cannot require them nor can they assess any kind of penalty to a student for not wearing them.”

A student exits the MU Student Center on Thursday in Columbia. COVID-19 vaccines can be scheduled via appointment at MU Health Care or with the city of Columbia.

MU is ending its COVID-19 mask requirement, and many employees and students aren’t masking their frustration about the decision.

“I expect it will be chaotic, and the students and myself are going to lack direction and firm understanding of what we should be doing and what we are required to do,” Christopher Deutsch, who works in MU’s history department, said in an interview.

In a mass email sent to campus Thursday morning, two members of MU’s Incident Command Team asked students, faculty and staff to continue voluntarily wearing masks in all indoor spaces, especially when social distancing is not possible, regardless of vaccination status.

After about five weeks of deliberation and conversations with experts, university administration decided against asking the curators for an extension of the previous mask policy, MU spokesperson Christian Basi said.

“Our team is still meeting on a weekly basis. We’re still watching the situation very closely,” Basi said. “We continue to monitor, but we feel like this is a good place, that the university is in a good place.”

COVID-19 case numbers have remained low during the fall semester, and local hospitals are keeping up with COVID-19 patients, he said. As of Thursday morning, the university reported 26 active student cases and 12 active cases among faculty and staff.

Multiple notable schools in the area surrounding MU and beyond will still require masks indoors. These include Columbia College, Stephens College, the University of Kansas and Missouri State University, among others.

Removal of the mask requirement sets up the possibility for conflicts between people who are pro- and anti-mask when classes resume Monday.

“I would like (it) if we still had the mandate,” said Kathleen Trauth, chair of the MU Faculty Council. “It keeps us protected, but I can see the other perspective.”

This policy change comes only a week after the council passed two resolutions, one in support of required masking and the other in support of mandatory vaccinations.

Missouri Students Association President Landon Brickey voiced the prominent emotion he gathered from students around him about the new policy — frustration.

Brickey acknowledged that fear was another emotion he has been feeling since the announcement.

Brickey emphasized the importance now more than ever for individuals to decide to wear a mask and get vaccinated.

“If the system and the university aren’t going to keep us safe, then we have to keep each other safe,” he said.

Faculty, students and others took to social media, sounding off their concerns and perspectives following the news.

“I cannot emphasize enough my frustration that @Mizzou has done away with the mask mandate & now I have to go into a small room with 120 students while having a vulnerable 1 year old at home. I endured pregnancy/a newborn in this crisis, so disappointed in the lack of leadership,” communications professor Cassandra Kearney wrote on her Twitter feed.

After reading the email campus received Thursday morning, many students were concerned about how this would affect their classrooms the rest of the semester.

“I feel like it might be a little too early to do that,” sophomore Hannah Schaff said. “I think it’s important to make sure that we keep our community safe even outside of Mizzou and keep each other safe and just make sure that everyone feels comfortable.”

“I think if you’re vaccinated, that’s fine, but I’m not too bothered about it. I’m all right with it,” Woldekidan said.

Junior Ben Pfeifer is concerned that without the mask mandate, cases will rise again.

“It doesn’t really make a lot of sense to me. I don’t understand why they see this having a positive impact on COVID cases in Columbia and in Boone County and on campus,” Pfeifer said.

With a possible increase in cases, freshman George Frees is concerned for the immunocompromised students on campus. Despite receiving his third dose, he’s still bothered about the vaccination rates on campus.

“I think that it seems to have been put in place after no logical change,” Frees said. “So it may be an attempt to appeal to donors or supporters of the university or just popular belief in this area. So, I believe that it was probably a decision based not entirely on the science available.”

Students who have health concerns and might feel uncomfortable with the expiration of the mask mandate can contact the disability center, Basi said.

Basi added that students requesting accommodations will be assessed on a case-by-case basis by the center, taking into consideration individual classroom environments. Depending on the circumstance, accommodations may include space accommodation, seating rearrangements, supplying advanced personal protection equipment and potential utilization of plexiglass dividers.

MU's mask mandate is set to expire Friday, with no curators meeting scheduled

The mask mandate at MU could expire Friday if there isn't a vote on the matter before then.