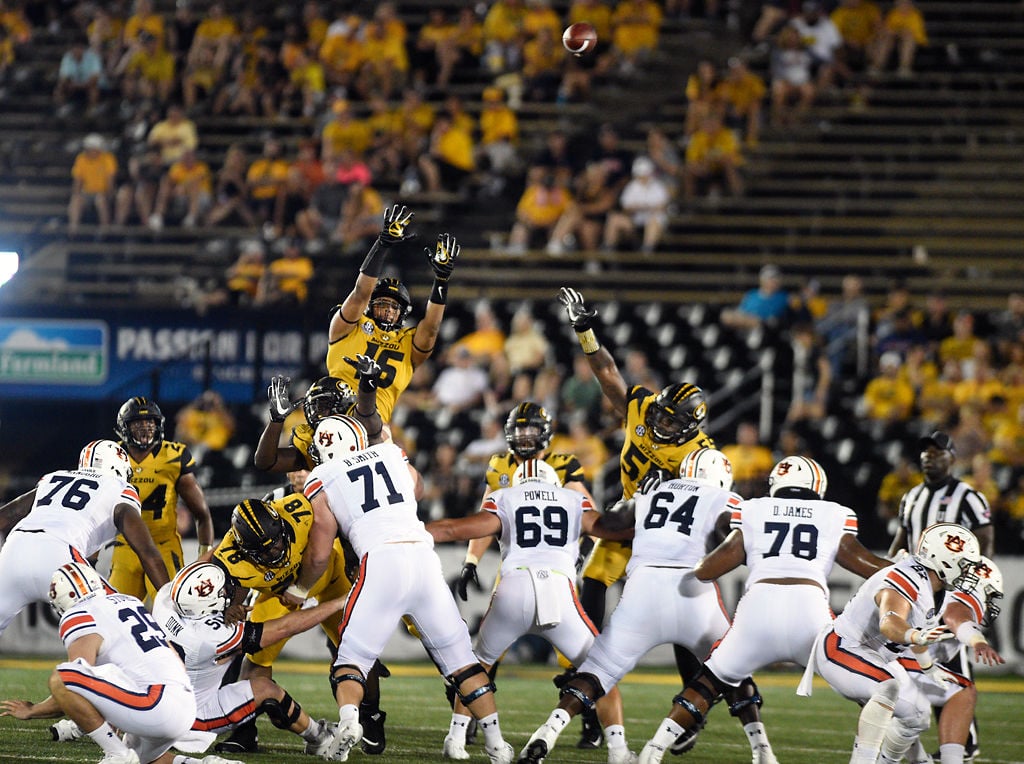 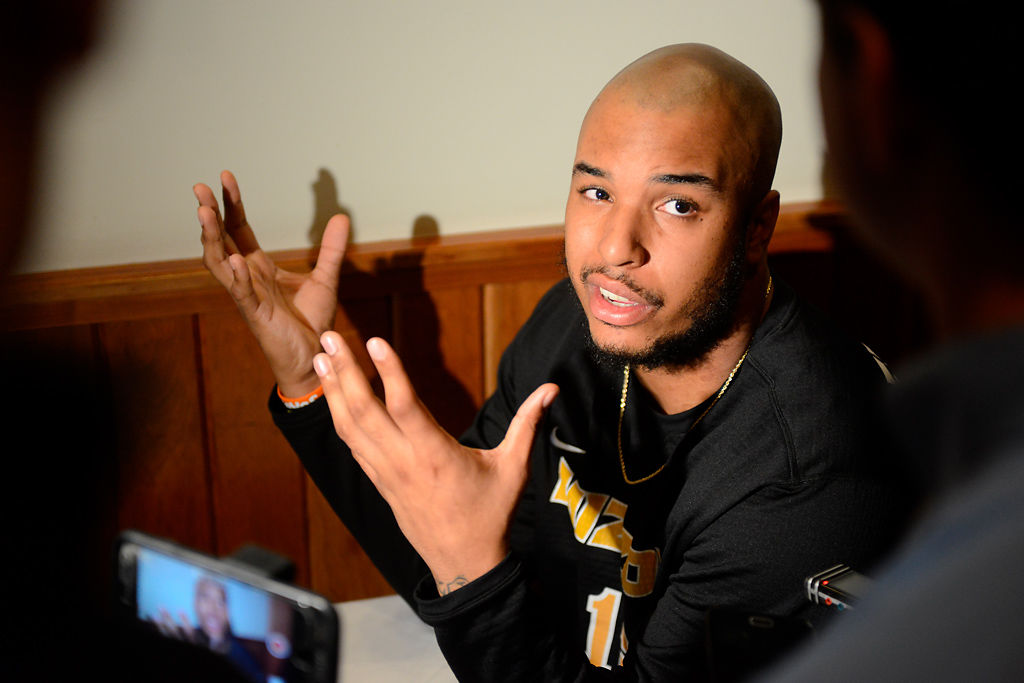 Marcell Frazier talks to members of the media about overcoming the challenges of injury during a news conference Dec. 26, 2017, at the Hyatt Regency Downtown in Houston. Frazier’s XFL season was cut short because of the novel coronavirus.

Marcell Frazier talks to members of the media about overcoming the challenges of injury during a news conference Dec. 26, 2017, at the Hyatt Regency Downtown in Houston. Frazier’s XFL season was cut short because of the novel coronavirus.

It’s March 17, and Marcell Frazier should be lifting weights or going to team meetings. The Seattle Dragons defensive end should be preparing for Week 7 in the XFL.

Instead, the former Missouri Tiger is back in his hometown of Portland, Oregon, and he’s halfway through a football season that has ceased to exist. At this point, he’s just trying to figure out how to spend the first of many days off.

“This is really unprecedented,” Frazier said.

He might go for a hike or take a trip to IKEA, but however he proceeds, he’s just trying to lead a semi-regular life at this point.

The league’s inaugural season came to an abrupt halt on March 12, with a four-line statement: “Currently, the XFL will not be playing its regular-season games. However, all players will be paid their base pay and benefits for the 2020 regular season. All XFL ticket holders will be issued refunds or credit toward future games. The XFL is committed to playing a full season in 2021 and future years.”

Once the NBA suspended its season on March 11, Frazier said the XFL’s stoppage of play felt inevitable.

“We all kind of felt it coming, but you always hold out hope, man,” he said. “I was guilty of holding out hope and hoping that everything was going to work out.”

The season’s suspension meant a suspension of hope for both Frazier and the league. Many in the XFL saw it as a renewed chance to, at best, find their way to the NFL and, at the very least, get another shot at playing professional football.

It’s early March, and the XFL is into the heat of its season. Frazier is two days removed from a loss to the St. Louis BattleHawks.

Despite the narrow loss, Frazier’s place with the Dragons is a positive change of pace from his previous professional football stints.

After two NFL training camps with the Seattle Seahawks and Cleveland Browns and some time spent on CFL practice squads in Calgary and Winnipeg, Frazier returned home to Portland and coached the defensive line at his alma mater, David Douglas High School, in 2019 while finishing his Master’s in education.

Now, after a brief break from playing, he’s almost halfway through a regular season at the professional level. The season started for him in December, two months after he was drafted by the Dragons.

His weeks have been structured similarly to what they were when he played in the Southeastern Conference. His coaches are mostly former NFL guys. The TV packages that major networks have put together for league games is nothing short of what the NFL or NCAA get. The quality of players is also similar to the NFL, Frazier said, including a substantial number of former NFL players. The fan response has also been immense.

“The product, for being brand new,” Frazier said, “has been amazing.”

It’s also apparent that the league’s been a melting pot of athletes with a vast amount of football experiences and perspectives. That’s even apparent in its contingent of former Missouri players.

It’s an ex-Tigers generation including Kony Ealy, L’Damian Washington and Marcus Lucas, all of whom are close to or past the metaphorical hump of their professional football careers. All came into the league with professional experience, some just from the NFL and others from other leagues like the CFL and short-lived AAF.

For some like Lucas and Washington, the reasons for getting involved in the league are a little more complex.

“To see my son on the sidelines during the games and things like that, for him to see me play,” Lucas said, “that’s been huge for me.”

Washington said that his 18-month-old son was the “driving force” in him playing in the XFL. He also noted a coaching stop of his own last fall, at West Middle School in Columbia, as a source of motivation.

For everyone involved though, there’s still that chance to make it back to the NFL.

“It was an opportunity for me to get my s- — back,” Ealy said. “I’ve got to get back, get out here and show these teams in the NFL that, ‘Hey, Ealy’s still here, available and ready.’”

However, Frazier noted that chance may not be there without the XFL.

“I’m super grateful to be where I’m at, because I think without this opportunity, there might never have been a chance at the NFL ever again,” he said. “It’s hard to get tryouts and things like that, but I think at the end of the season, I’ll have my opportunity.”

The Dragons announced March 14, two days after the regular season’s suspension, that one of their players had tested positive for COVID-19. Frazier wasn’t surprised when he heard the news.

“We were just not shocked that more people didn’t have it, honestly,” he said.

According to Frazier, Seattle began quarantining players in December, the same month that team activities began.

Fraizer never showed any symptoms, but by the end of the season, several teammates did.

“We had a s- — ton of guys quarantined after the Houston game,” he said. “And I think those are the guys who got tested and the rest of us just kind of got like a screening. Basically just symptom check, temperature take.”

Frazier and his teammates felt like someone was bound to test positive for the virus. With team facilities and lodging set up at the Westin in downtown Seattle, the Dragons were in close proximity to travelers on an almost daily basis.

“There are flight attendants coming into this hotel every week,” Frazier said. “There’s flight crews flying in weekly — daily almost. So we understood.”

Prior to the season’s suspension, COVID-19 wasn’t a frequent conversation for Frazier and his teammates.

“It’s not been anything out of the usual for us,” Frazier said on March 11. Then, a pause.

“Well, it’s going to be unusual to play with no fans.”

Just hours before the NBA cancelled its season, the XFL announced Seattle would be playing in an empty stadium for that week’s game. Frazier wasn’t too concerned with the situation. His team was practicing good hygiene, and he felt like his fellow defensive linemen were all a bit germaphobic anyway.

“I think we’re all pretty conscious of washing our hands and using Lysol and things like that,” he said.

At this point, focus was on a Week 6 matchup with the LA Wildcats.

“I don’t want to say one way or the other what is going to happen with the LA game,” Frazier said, “but the energy was there at practice today, and we’ll see where the score ends up.”

A pause in the action

With the season effectively canceled, Frazier’s brother, Tyrell, made the three-hour drive to the Westin from Portland the following day. Frazier and his agent talked it over and agreed ahead of time: Don’t take a plane.

“Just knowing that Seattle is kind of an epicenter,” Frazier said. “I felt kind of socially responsible not to go to the airport.”

So Frazier put his football gear in a garbage bag, packed it into his brother’s car and headed home.

Now, Frazier is stuck in an odd situation.

Luckily, the rest of his salary for this season is fully paid for. But with no other leagues active at the moment, Frazier can’t get back on the field. In fact, with most gyms and facilities closed, he can’t even do much training.

“It’s kind of just this situation where everything’s kind of on pause,” Frazier said. “Which is not bad. Literally, I’m four days out from a season, so it’s not bad that my body’s getting a little bit of rest and recovery.”

In the meantime, Frazier can’t really go back to work, at least not at his preferred workplace, as schools in Portland are shuttered until April 28.

“I’m just job hunting out of boredom almost,” he said.

At this point, Frazier is a lot like the rest of us. He’s staying inside as much as he can, avoiding crowds and putting his disinfectant wipes to good use. But he’ll be keeping an eye on his phone, holding out hope that a league — the CFL, NFL or even the XFL — comes calling.