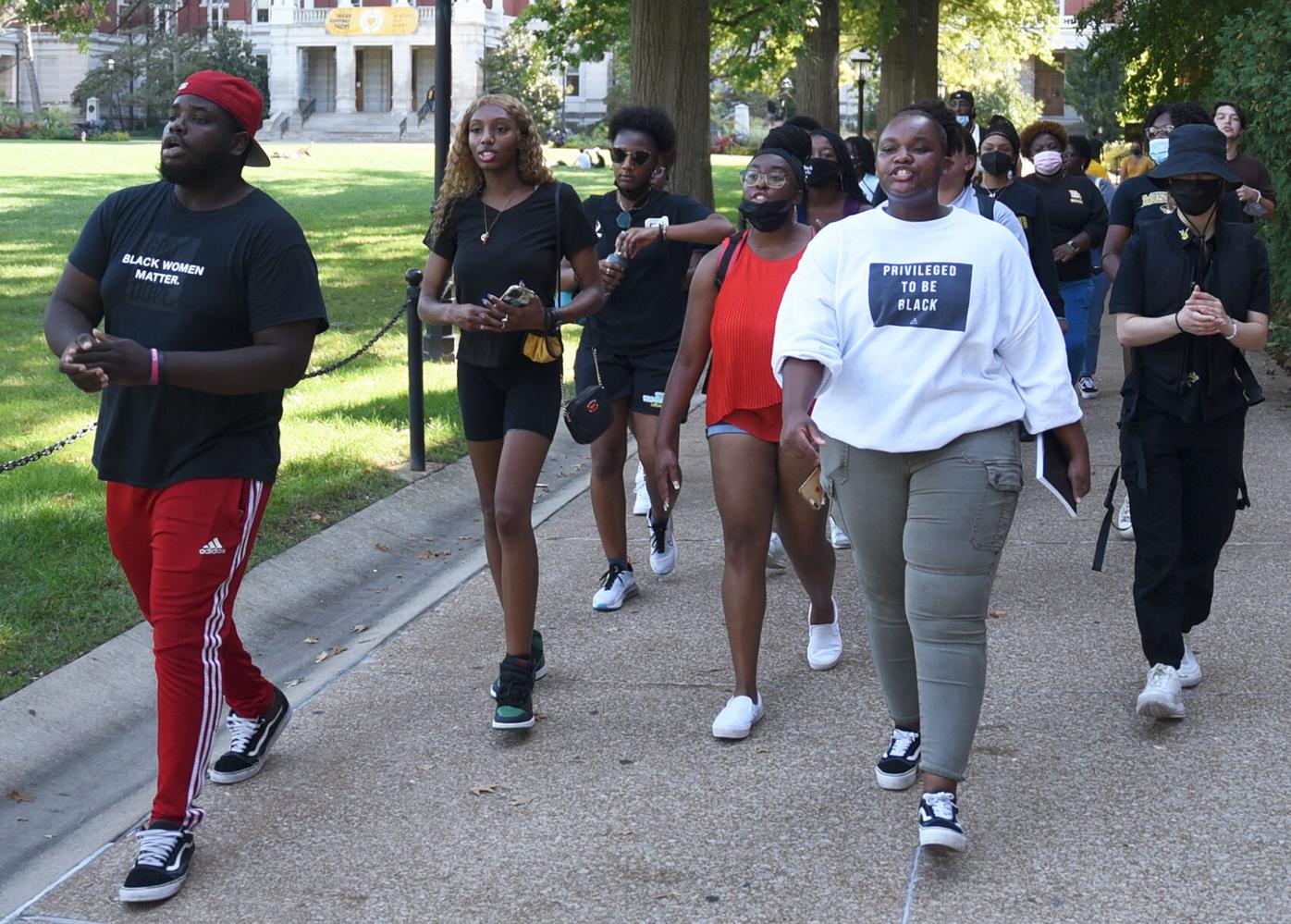 Isaiah Jackson, left, and Kiessence Bassett lead the crowd Friday, Oct. 8, for a Solidarity Walk at MU. During the walk the crowd shouted, “You can’t stop the revolution.” The solidarity walk started in 2018. 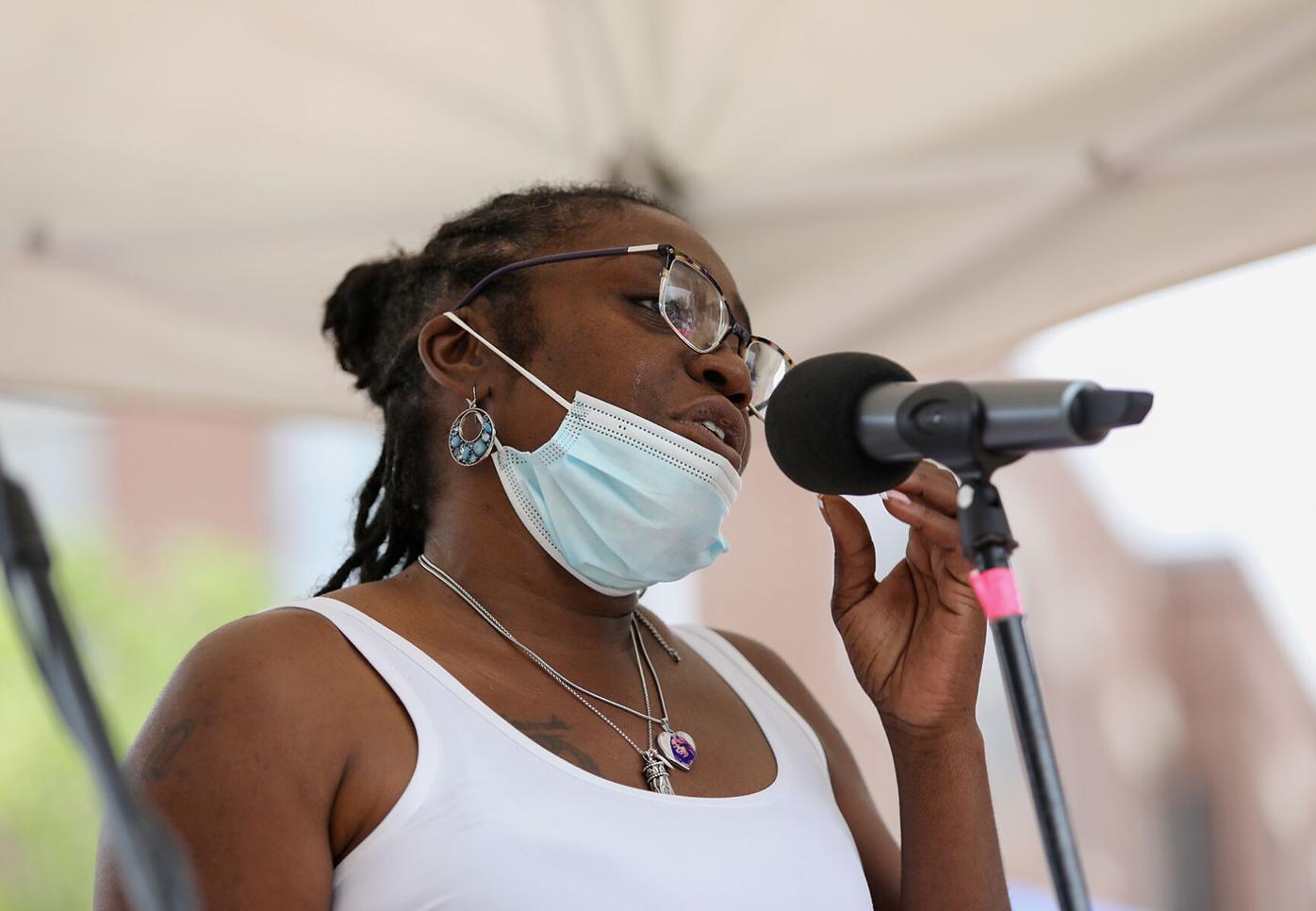 Shaunda Hamilton, co-founder and executive director of Boone County Community Against Violence, speaks to a crowd of activists Saturday, Oct. 2, in Columbia. “For years I have always said I am not going to let my sons become a victim of gun violence, and I worked really hard and tirelessly to make sure that didn’t happen,” Hamilton said. “But I never thought it would happen to one of my girls.” 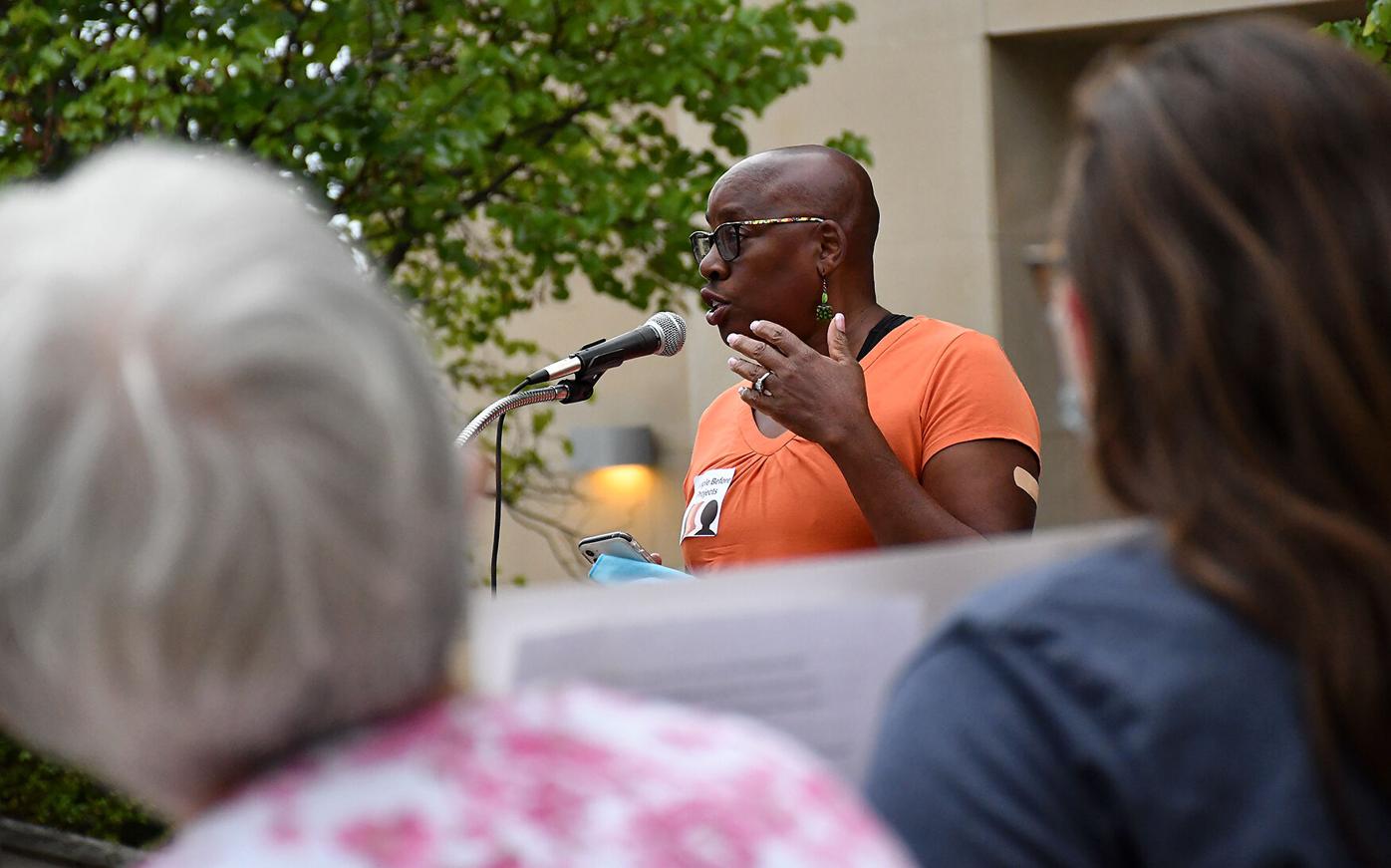 Traci Wilson-Kleekamp speaks before a crowd at the People Before Projects rally Tuesday, Sept. 7, at the Daniel Boone City Building. Around 40 people gathered before the Columbia City Council meeting to urge for a more robust research and public input process. 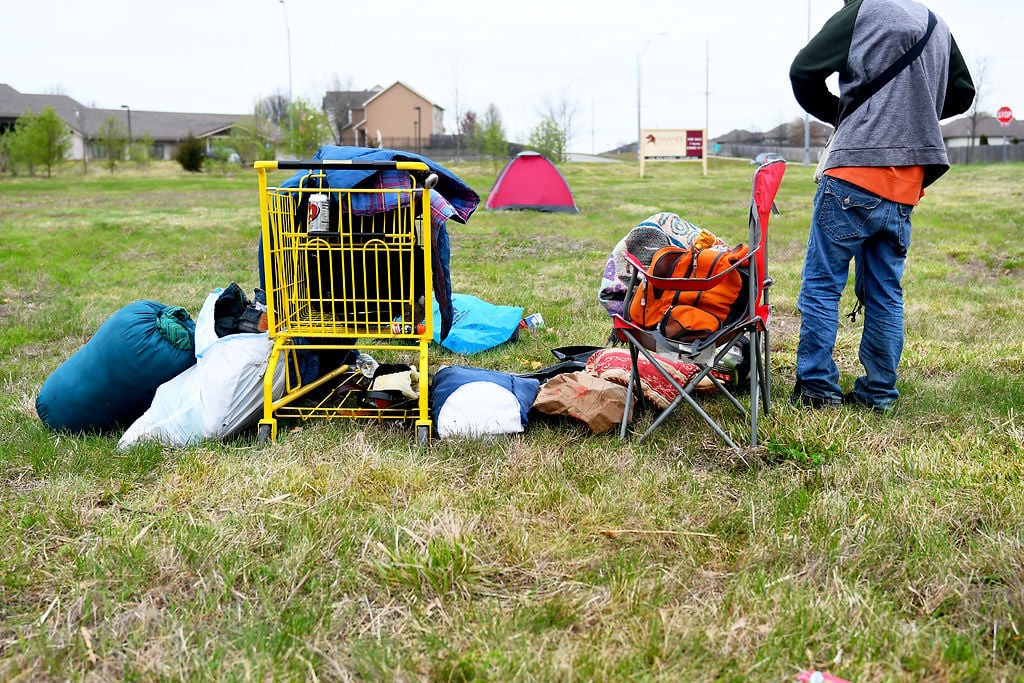 A homeless man packs up his belongings Monday, April 6, 2020, at a temporary homeless camp in Columbia. 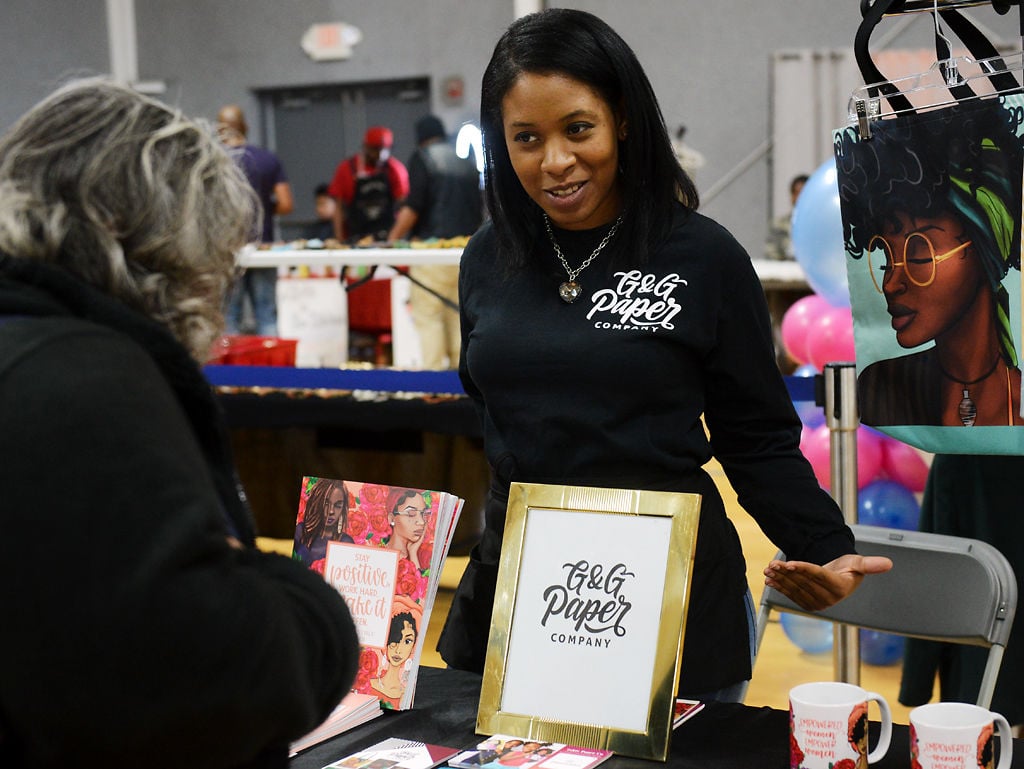 Kendra Jones talks with a customer at her booth about her products at the Columbia College Black Business Expo on Saturday, Feb. 29, in Columbia. Jones is the owner of G&G Paper Company, and designs all the products she sells. 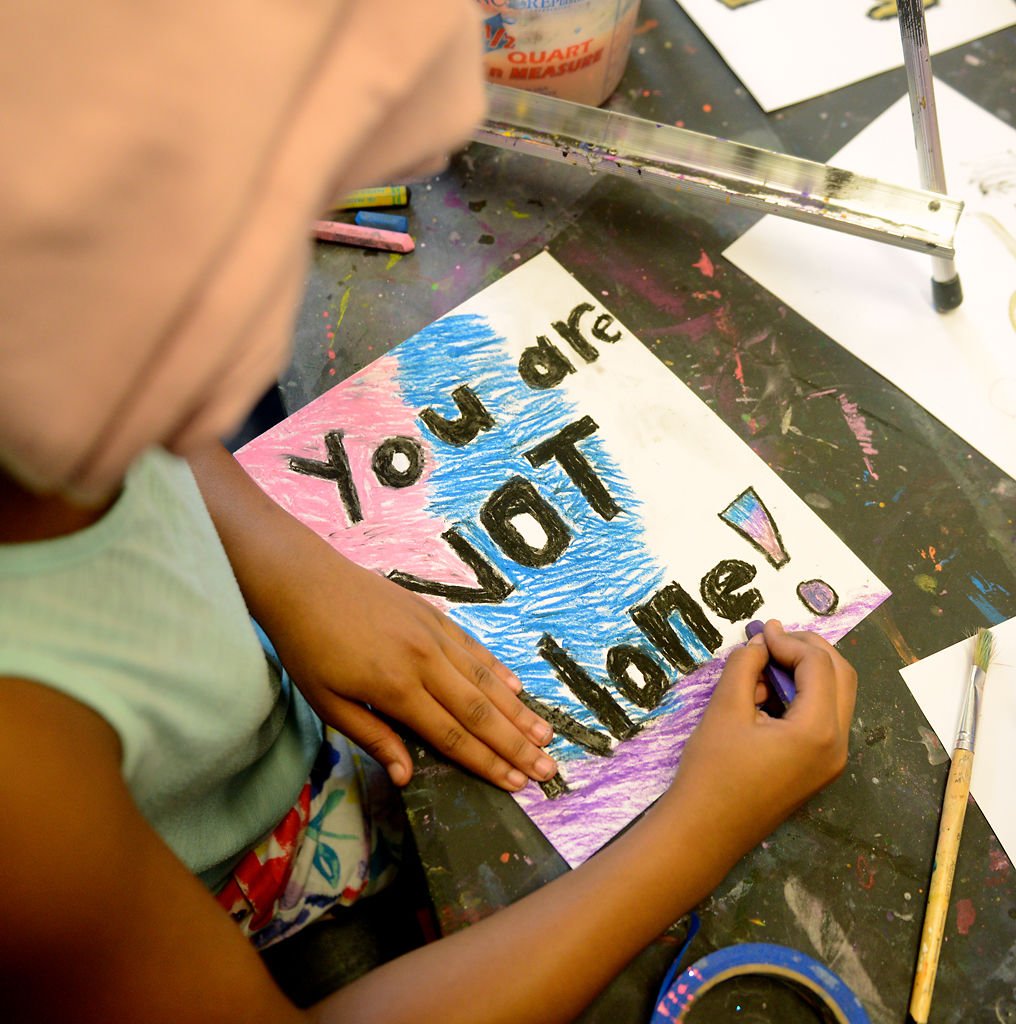 A poster is drawn for the Mental Health Fair art contest on Wednesday, Sept. 18, 2019, at the Columbia Boys & Girls Club.

During the three formal hearings for the Fiscal Year 2022 budget, which was approved on Oct. 1, many citizens spoke to the Columbia City Council directly and shared ideas on how they should spend the $25 million from the American Rescue Plan Act.

In the public hearings alone,people coalesced around certain issues and/or topic areas. The Missourian sorted through all public comment in these hearings and summarized the most prominent ideas:

The need for a robust public process to decide how to spend this money. This involves coming down off the City Council platform and going out into the community — “meeting people where they’re at.” Citizens also recommended increased accessibility for these discussions, including options for people who don’t speak English as a first language or might not trust council members. There was also an emphasis on transparency throughout the process and a focus on a data-oriented process.

The issue of homelessness in the community. People who are homeless or are struggling with housing insecurity don’t have a permanent place to get help in the community. There are people sleeping at bus stops, forced to stay long term in hotels and struggling in the city’s neighborhoods. There is a need for a comprehensive homeless services center in the community as well as increased affordable housing.

The issue of mental health in the community. Citizens emphasized that mental illnesses, specifically depression and anxiety, and mental health crises are more prevalent than ever. COVID-19 has worsened these issues and, for many, has decreased accessibility to resources. In addition, citizens said that funding for social services has remained unchanged since 2010 and is in desperate need of an increase. Possible options suggested include a 24/7 mental health clinic, a telehealth system and a mobile clinic that goes to communities in need.

Increasing equity and equality for minority groups. Citizens repeatedly shared that people of color often don’t feel comfortable coming into the council chambers and fear that if and when they do speak up, their concerns won’t be heard. They also shared there are structural issues that perpetuate inequity and inequality in our community that need to be interrupted and changed.

These ideas come from just a small number of residents who attended these specific City Council meetings and spoke on the ARPA funds. Here is a link to a document of all the ARPA-related comments offered during the budget hearings:

Any member of the public is allowed and encouraged to share their own opinions at City Council meetings. Based on council discussion, there will likely be a separate process to further share ideas and gather input on how the ARPA funds can best be spent.

How the council can hear from you

Over six months, members of the public presented the City Council with suggestions on how to spend $25 million in ARPA funds.