As Missouri hospitals continue to see rising COVID-19 admissions, some local officials around the state are taking steps to slow the trend before it overwhelms health care providers.

The recent figures have climbed dramatically in recent weeks and have left health leaders on alert. October has seen the highest rates of infections and hospitalizations so far.

Missouri is one of 17 states without a statewide mask requirement, relegating health directives to cities and local public health agencies responsible for overseeing one or more counties.

The surge of hospitalizations from bordering municipalities without mask mandates is hitting some regional hospital systems that serve a wide catchment area.

In other words, hospitals are having to take more sick people living in neighboring areas that lack adequate medical resources.

As a result, a small but growing number of towns and counties have enacted mask ordinances, in some cases at the request of nearby regional hospitals.

The Columbia/Boone County Department of Health and Human Services reported increasing hospitalization numbers over the past couple weeks.

On Friday, a record 99 people hospitalized in the county received either a primary COVID-19 diagnosis or tested positive after admittance. Thirty-three were in ICUs, and 18 were on ventilators. Only 13 of those 99 were Boone County residents.

Additionally, 11 of the 43 patients in the MU hospital system reported Friday were from Boone County — all at University Hospital.

Jeffrey Hoelscher, public affairs officer of the Harry S. Truman Memorial Veterans’ Hospital, said there has been a sustained increase over the past several weeks.

“This is concerning because experience tells us that these outpatient cases could lead to an increase in hospitalizations,” he said in an email.

The idea is that hospitals can make lateral adjustments for specific patient needs, such as reallocating beds or ventilators.

“What they’re concerned about is that they have more people in the hospital,” he said. “Plus, we’re still getting more new cases. I mean, just one day earlier this week (Wednesday), we had over 100 cases.”

“I don’t think anybody’s panicking or anything like that yet,” Clardy said, “but numbers are clearly going up. Numbers of COVID-related cases are really going up. I just think that they have a heightened awareness and are kind of on alert right now.”

Although it’s not unusual for the hospitals to take in patients from surrounding locales, health workers like Mark Wakefield, a urologist at MU Health Care, are concerned about the effect rising numbers could have on staff fatigue.

“I worry about the health of workers from an emotional and mental standpoint,” Wakefield said. “Will they have the stamina to continue working under these conditions? And for how long? Eventually, it could become physical. Are you going to be tired? Are you going to make good decisions in your life?”

Whether Boone County will issue its own mask mandates is “something that the county commission has not approached us about yet,” Clardy said, “although it is clear that we’re hearing more and more people suggesting that maybe that needs to be done.”

In southern Missouri, towns such as Ozark and Nixa in Christian County recently established mask ordinances after nearby hospitals in neighboring Springfield-Greene County lobbied mayors in the region for help.

In Springfield, a mask ordinance has been in place since July as part of a recovery plan. Still, hospital authorities believed it was necessary to extend the measure to neighboring counties.

The Nixa City Council had voted in July against a mask ordinance on the grounds that the city’s number of cases was low at the time. Instead, they opted for an awareness campaign about the importance of wearing a mask voluntarily, Douglas said.

“Unfortunately, that education campaign did not have the desired effect, (as) we’ve seen in the number of cases over the last couple of weeks and months,” he said. 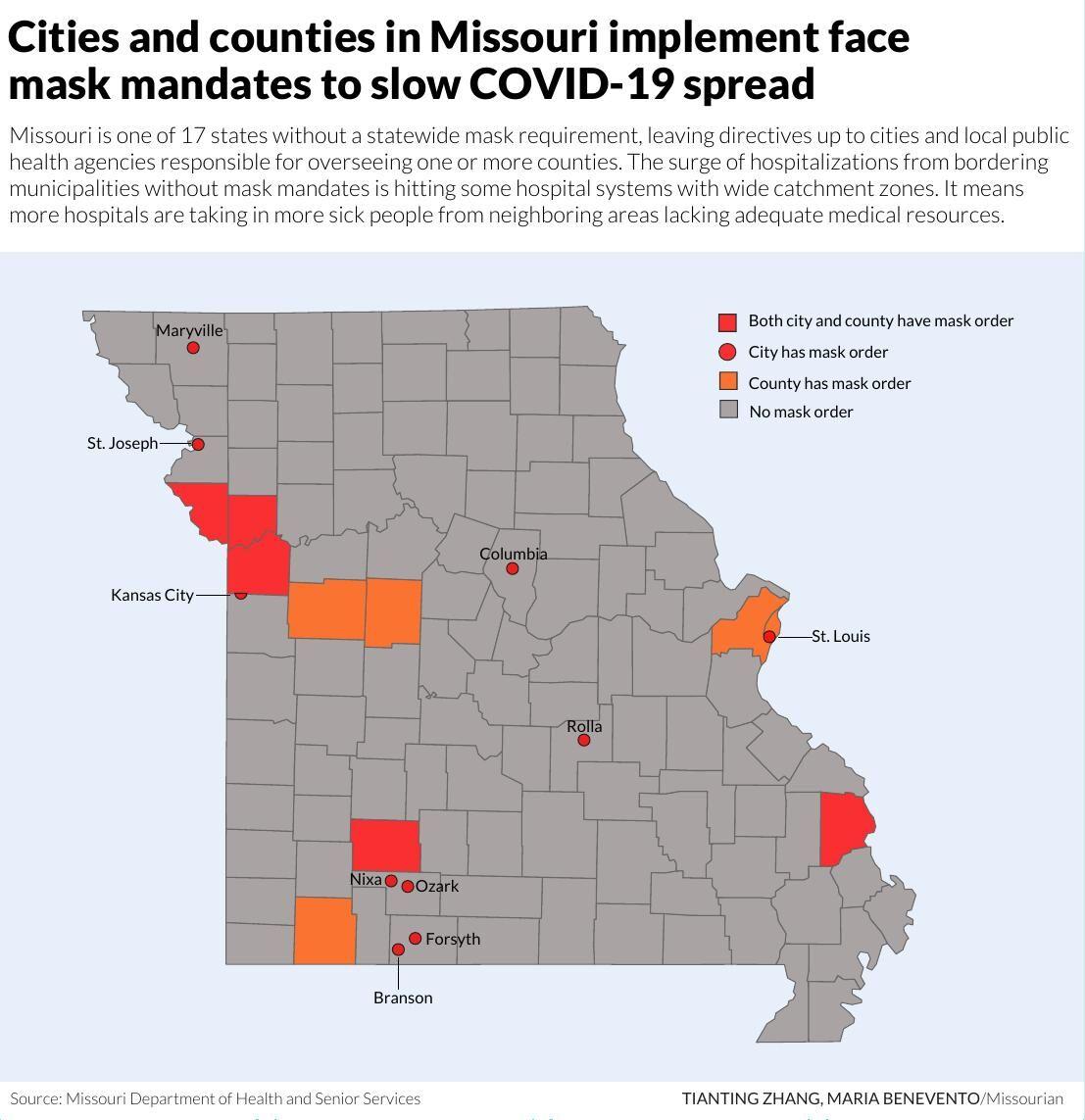 Katie Towns, assistant director of the Springfield-Greene County Health Department, said the department is supportive of the new mask ordinances in the counties surrounding Springfield to help their hospital system and health employees, as part of other evidence-based strategies to control the disease.

“We are a regional hub for health care, so hospitalizations in Springfield, in Greene County, definitely include people from all over the region,” she said. “The hospitalization rate that’s reported here reflects a region, not just the city and county.”

“Areas like Springfield are seeing a lot of patients transferred in from smaller hospitals and surrounding communities, putting additional stress on systems like Cox,” he said.

“Our health care workers, rural and urban, have been on the front lines for almost eight straight months. They’re tired and overwhelmed, but they continue to rise to the challenge and take care of Missourians.”

It can be difficult to measure spread from the available data health departments gather.

In isolation, individual metrics tell only part of the story. Case counts, testing totals, positivity rates, hospitalizations and death figures combined can provide useful insights into a given jurisdiction’s experience of the pandemic, particularly when viewed alongside public data on local testing strategies.

“The other thing we look for is what are the number of asymptomatic people who come into the hospital for a procedure, and how many of those are positive?” Wakefield said. “We did about 10,000 of those tests and had, like, eight positive in the summer, and now it’s eight a day.”

In the beginning of the pandemic, hospitals were most concerned about strained medical supply chains that provide PPE and other resources, in addition to canceled or postponed elective procedures.

Whether the hospital has to shift gears and cancel elective procedures depends on availability of beds and the health of hospital staff, Wakefield said.

Meanwhile, city health officials have taken public heat for the financial consequences that restrictive health orders have had on small businesses.

“Columbia has been spared an earlier exhaustion of our health care system. I think our city deserves a lot of credit,” Wakefield said. “The economics of restricting public behaviors is real, but having the hospital overwhelmed with COVID-19 patients is also going to be financially concerning.”

Wearing masks is becoming increasingly important as the weather changes and people find themselves in closed, recirculated air, he said. The same things that increase the risk of the flu may increase the likelihood of COVID in the near future.

“You know, very smart people have models to predict,” he said. But the recent increase in numbers tells its own story.

“The practical person,” Wakefield said, “is getting an idea what the next two to four weeks hold.”

Although there's been a decrease in testing, there has been an increase in positive cases, likely due to increased community transmission.