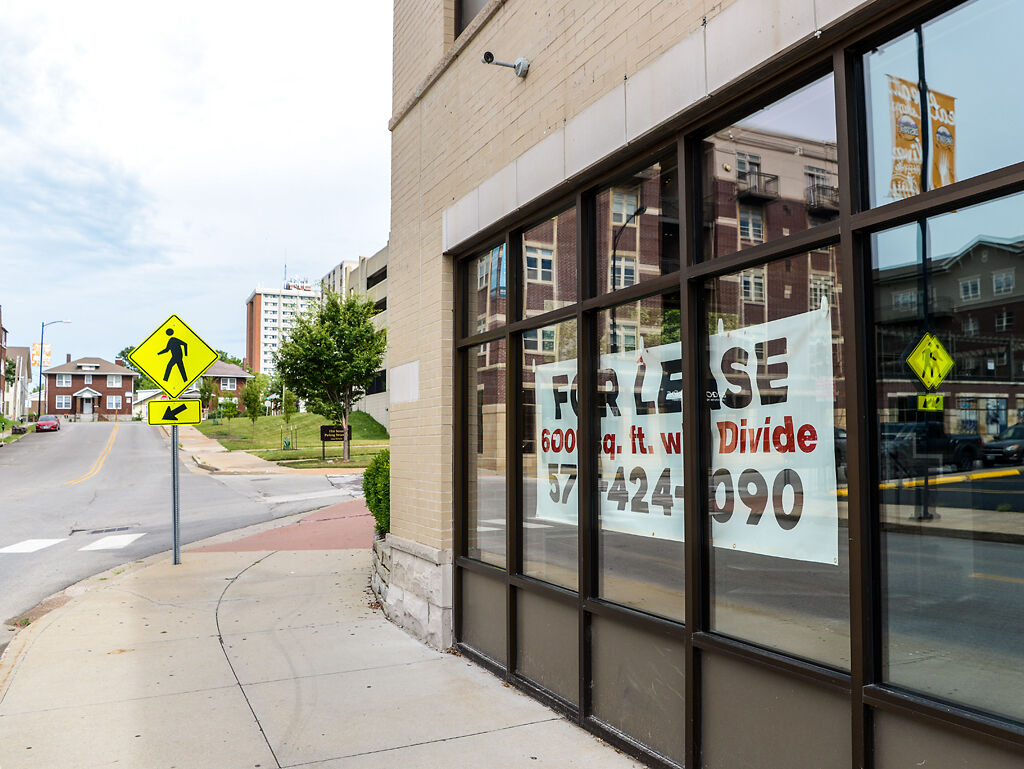 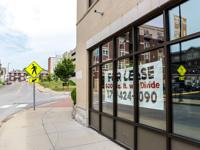 A “For Lease” sign hangs in the window at the location that was formerly Bambino’s Italian Cafe on Monday on Elm Street in downtown Columbia. A SmartAsset study has ranked Columbia the 25th-most economically vulnerable U.S. college town — of 95 analyzed — because of the effects of the COVID-19 pandemic.

A sign on the entrance of Fuzzy’s Taco Shop’s downtown location notifies customers of its permanent closure Monday on South Ninth Street in downtown Columbia. The sign also encourages customers to visit the company’s other local location, on Nifong Boulevard. 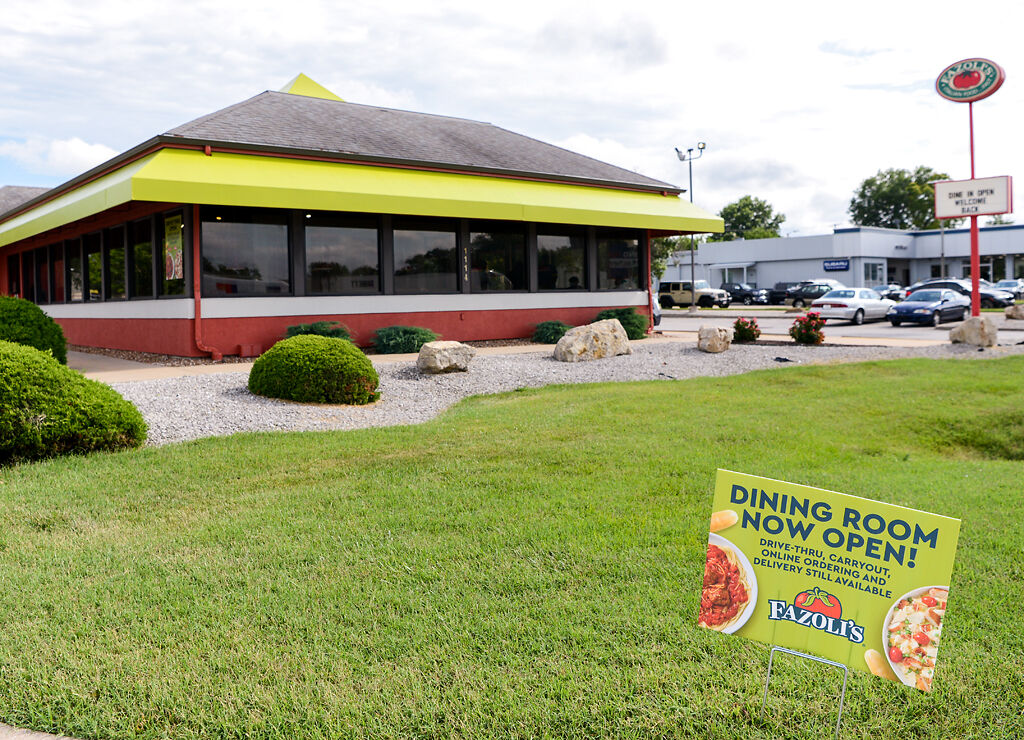 A sign advertises that the dining room is open at Fazoli’s on Monday along I-70 Drive Southwest. 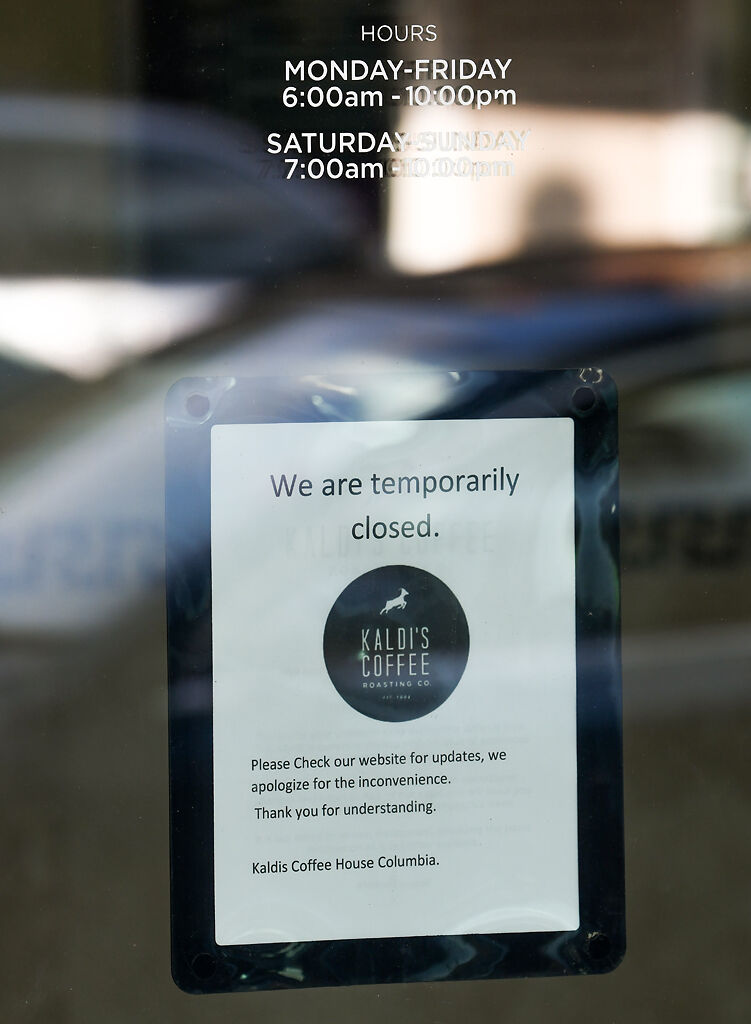 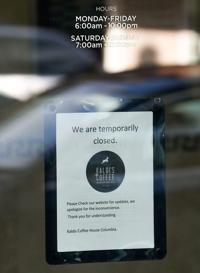 A sign notifies customers of a temporary closure at Kaldi’s Coffee on Monday on South Ninth Street in downtown Columbia. Columbia’s economy is reliant on a large student population.

A “For Lease” sign hangs in the window at the location that was formerly Bambino’s Italian Cafe on Monday on Elm Street in downtown Columbia. A SmartAsset study has ranked Columbia the 25th-most economically vulnerable U.S. college town — of 95 analyzed — because of the effects of the COVID-19 pandemic.

A sign on the entrance of Fuzzy’s Taco Shop’s downtown location notifies customers of its permanent closure Monday on South Ninth Street in downtown Columbia. The sign also encourages customers to visit the company’s other local location, on Nifong Boulevard.

A sign advertises that the dining room is open at Fazoli’s on Monday along I-70 Drive Southwest.

A sign notifies customers of a temporary closure at Kaldi’s Coffee on Monday on South Ninth Street in downtown Columbia. Columbia’s economy is reliant on a large student population.

An already difficult year may not get much better for college towns like Columbia, at least according to a new study by SmartAsset, a financial technology company based in New York City.

The study ranks Columbia the 25th-most vulnerable U.S. college town — of 95 analyzed — to the economic effects of the coronavirus pandemic.

Much depends on what universities decide to do about holding in-person classes this fall and what those classes will look like. Many fear that in-person classes will accelerate the spread of the virus. Even if schools reopen, the pandemic is still expected to reduce spending and revenues as at least some students reduce activities to stay safe.

That’s a big concern for cities like Columbia, whose economies rely on large student populations.

Columbia is projecting a 10% decline in sales tax revenue this year, according to previous Missourian reporting. Originally, the council had only budgeted for a 2.5% decrease. Sales tax accounts for 27% of the city’s revenue.

In a radio interview Monday morning, Mayor Brian Treece talked about what it would take to get students back to Columbia.

“I think the key for us will be — until there is a vaccine and more widespread testing — that we keep cases manageable with respect to contact tracing and hospitalization so that we can allow in-person classes at our three colleges and universities here,” he said.

The three college campuses include MU, the UM System’s flagship campus with a student population just shy of 30,000; Columbia College, which has about 1,100 students; and Stephens College, with fewer than 1,000 students.

All three campuses have announced they will be holding at least some in-person classes next semester, and it’s still possible — especially in light of new outbreaks of the pandemic in many states in the U.S. — that classes will be offered entirely online at some point during the semester.

In the study, SmartAsset tried to identify the cities most dependent on undergraduate students and their spending. The study pulled data for all U.S. cities with a population of at least 50,000 and at least one four-year college or university and created a list of the top 25 most vulnerable.

The study compared students as a percentage of each city’s population, college staff as a percentage of the city’s workers and the concentration of bookstores, bars, restaurants, hotels and entertainment establishments within the city.

According to the study, undergraduate students taking in-person classes in four-year colleges make up 15.97% of Columbia’s population. College staff make up 15.56% of the city’s workers. And bars and restaurants make up 7.87% of the city’s establishments.

The study calculated an index based on all these factors and gave Columbia an index of 67.61. For reference, Lawrence, Kansas, the nearest city also listed in the study and home to the University of Kansas, scored an 81.68 and Bloomington, Indiana, home to Indiana University and the city ranked as most vulnerable, scored a 100.

A brighter vision from the mayor

In an interview with David Lile on KFRU radio Monday morning, Treece took the long view.

“When I look at the long-term horizon, I am optimistic on Columbia’s resiliency,” he said in the interview, “both in terms of the types of businesses we have but also what those businesses did early on in this pandemic.”

Wearing a mask is one proven way to reduce the spread of COVID-19. On July 6, the Columbia City Council passed an emergency ordinance, requiring masks when around people outside of one’s household.

In the interview, Treece said he’d had a phone meeting with 38 downtown bar, restaurant and retail owners who told him that the weekend after the mask ordinance went into effect, those businesses had “one of the best weekends ever.” He said that customers had told business owners they were waiting for things to get safer before they came out.

He said he’s seen an overall positive reception to the mask ordinance and believes that it was a good time to do it.

Treece also said that he’s been having continued discussions with health department leaders and school officials about what would have to happen for them to “push the panic button.”

A point of tension has emerged between businesses and the Health Department as the COVID-19 crisis grinds on: how the department informs people of possible exposure to the virus at businesses.

Columbia/Boone County Health and Human Services tweeted July 2 that anyone visiting Room 38, a bar on Eighth Street, between June 22 and 25 may have been exposed.

Billy Giordano, owner of Room 38, wasn’t happy with the way the health department handled the situation. He felt his bar was being singled out. He spoke to several local news outlets to express his frustration.

“Other places have had staff members test positive, and no press release was made,” he told KOMU. “All of the grocery stores, all of the gas stations are not really doing anything to help the situation anymore than we are, and yet there’s been no record.”

The Health Department also tweeted July 3 that anyone at Willie’s Pub & Pool or Silverball on June 26 may have been exposed.

Health Department Assistant Director Scott Clardy said the department sent out those notices for a reason.

With the recent rise in COVID-19 cases in mid-Missouri and across the country, there’s been a heightened focus on how businesses are working to keep people safe. Columbia/Boone County Public Health and Human Services said it’s working closely with businesses to that end.

“We have a whole group of people here that do nothing but work with businesses to help them follow compliance and understand what their requirements are,” Clardy said.

When the mandatory mask ordinance was passed, one of the chief concerns about the ordinance was how businesses would be expected to enforce this rule.

“What we expect businesses to do there is make a good-faith effort,” Clardy said. “So things like put a sign up saying that masks are required. If someone comes in their establishment and doesn’t have a mask on, tell them they need to have a mask on.”

The Health Department created signs for local businesses to post to inform customers of the new ordinance. Six signs have been released featuring various phrases, such as “Face masks required upon entry” and “Face masks required, smiles still encouraged.” One of the signs has been translated into Spanish.

Jonathan Weng, owner of U Knead Sweets, a bakery on Cherry Street, said that his business has had no problem getting customers to comply. He said his establishment doesn’t even need to put a sign up and that customers have been very responsive to verbal reminders.

“Occasionally, people walk in and, you know, some people wear their mask not the way they’re supposed to wear it,” he said “You know, if they put it under their chin, then we just kind of verbally tell them, ‘Hey, there’s a regulation that we need you to comply with, so please put your mask on.’ And most people don’t have a problem.”

Weng said that staff keep their masks on at all times, too. He also said that U Knead Sweets is working to put up some sort of plexiglass barrier to separate customers and employees, as well.

“This whole COVID-19 thing has really put a test on us,” Weng said.

In terms of promoting social distancing within businesses, Clardy suggests putting signs on the floor that mark 6 feet of distance to let patrons know where to stand or making certain aisles one-way to control traffic and avoid close contact.

“As far as what works best,” Clardy said, “make sure that a group that comes together stays together and then stays 6 feet away from any other groups. Those are the kinds of things that work best. It’s the physical distancing that works best”

The department’s website has resources for businesses and an email address (businessguidance@como.gov) dedicated to corresponding with businesses on the matter.

In a webinar hosted by the National League of Cities on Monday, leaders from other college towns across the U.S. were a little less optimistic than Treece in his radio interview. The webinar focused on addressing the economic uncertainty of the current climate, and leaders of several college communities implored the U.S. Senate to include $500 billion in relief funding for communities of all sizes across the country.

The webinar brought together leaders from several college towns, including Ronald Filippelli, the mayor of State College, Pennsylvania, home to Penn State.

“The absence of students since March has been crippling to our city,” Filippelli said.

Another panelist, Gloria Betcher, a city council member from Ames, Iowa, home to Iowa State University, noted that, before the pandemic, Ames had the nation’s lowest unemployment rate in February of 2020 at 1.7%. By the end of May, unemployment had quadrupled in the city. She also noted that the city recorded a $9.1 million shortfall in revenue.

“Ames, Iowa, is not unique,” Betcher said. “This story could belong to any American college town.”

Those behind on rent and utilities will face serious challenges soon, the Downtown Leadership Council learned Wednesday.