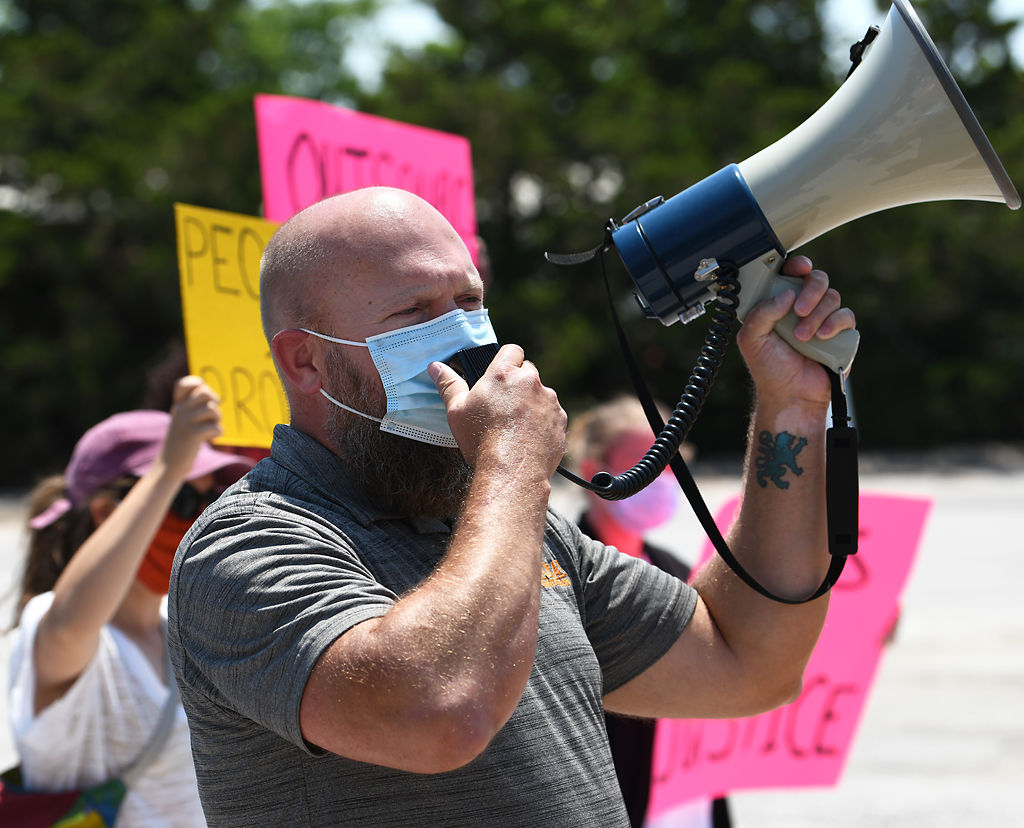 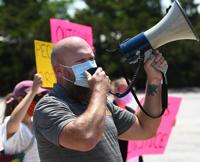 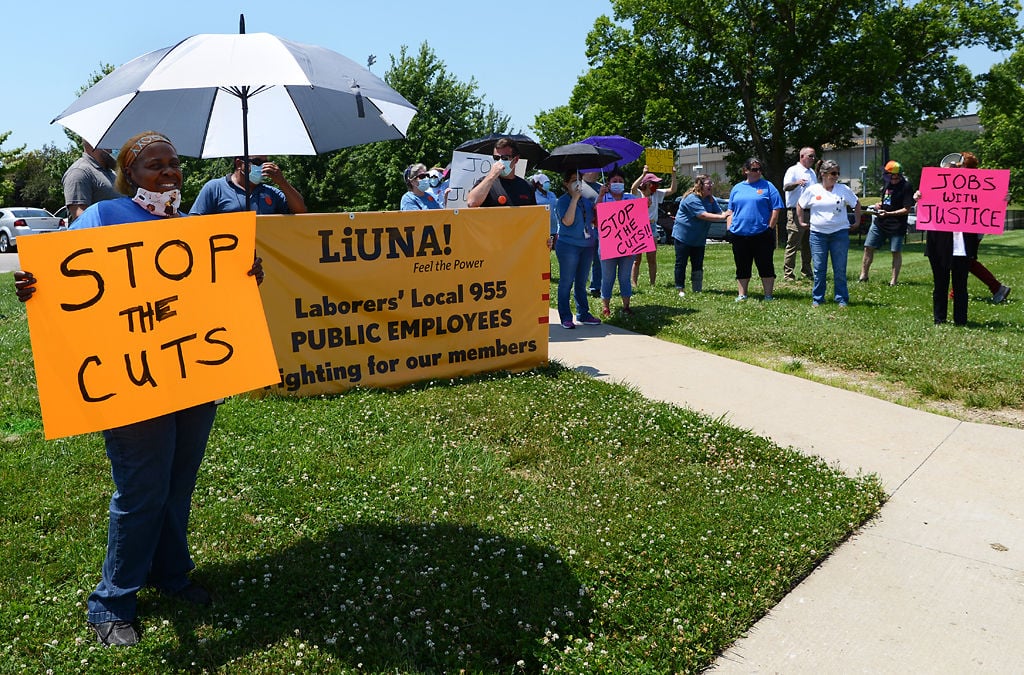 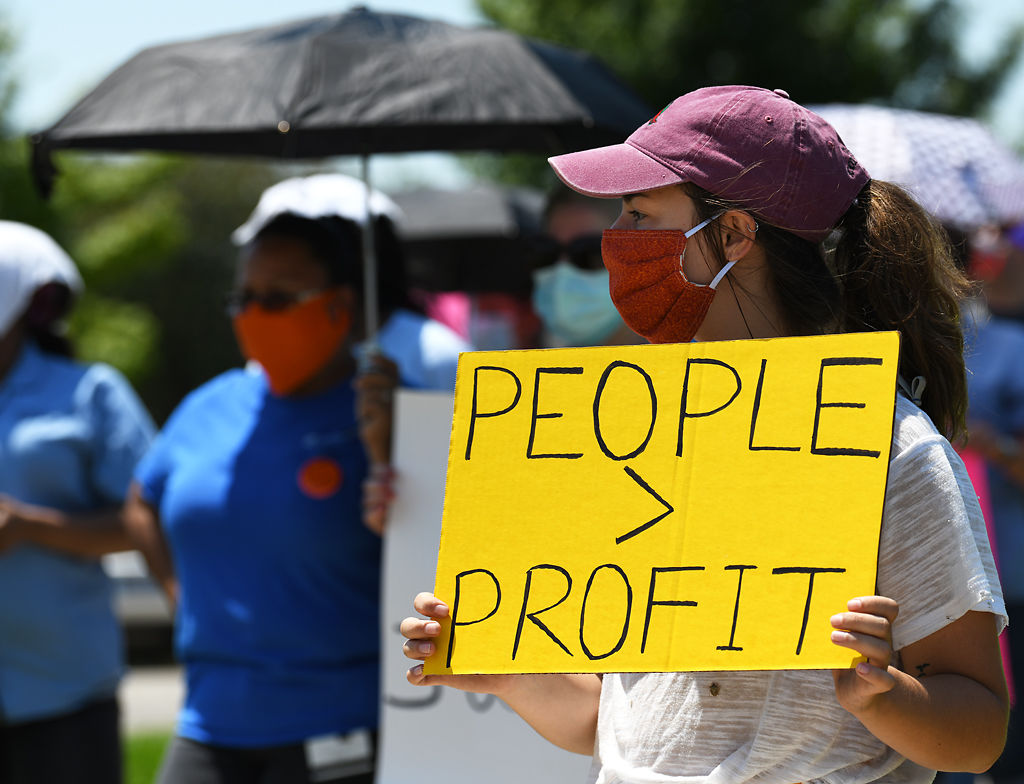 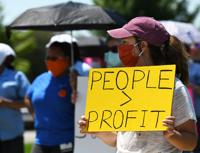 MU graduate student Lydia Schreiber participates in a demonstration and picket with MU workers Monday outside the General Services Building on MU's campus. "The most vulnerable members of our community should not be taking the cuts," Schreiber said.

MU graduate student Lydia Schreiber participates in a demonstration and picket with MU workers Monday outside the General Services Building on MU's campus. "The most vulnerable members of our community should not be taking the cuts," Schreiber said.

*The first demonstration over outsourcing was June 6. An earlier version of this article had the wrong date.

Less than a month ago, Anita Robinson learned she could lose her job.

She’s worked as a custodian in Middlebush Hall for six years. But in May, Robinson found out MU was considering outsourcing her position, as well as about 280 others, through private contracts.

Robinson was among about 30 people who rallied Monday at the General Services Building in response to MU seeking proposals to outsource custodial and landscaping jobs. The rally was organized by union group Laborers Local 955.

Current MU employees whose jobs would be affected were joined by faculty members, students and others. Employees came to the rally, which began at 12:15 p.m., just after getting off work. Many had begun their work day at 3 a.m.

MU began the bidding process to outsource landscaping and custodial jobs in early May, MU spokesperson Christian Basi said. Although MU already contracts both of these positions elsewhere on campus, about 280 people could be affected by future outsourcing.

“We’re with our members; we don’t want them to lose their jobs,” said Carl Baysinger, president of Laborers Local 955. He said employees could lose their health insurance, among other financial hardships, if MU outsourced their jobs.

Demonstrators marched around the General Services Building, off Stadium Boulevard near the Hearnes Center, waving signs that read “Jobs with justice!” and “Stop the cuts!”

As they walked, Andrew Hutchinson, an organizer for Missouri Jobs With Justice, shouted into his megaphone: “Show me what a union looks like!”

“This is what a union looks like!” the group yelled back.

*This was the second demonstration in response to job outsourcing. Pamela Stephens attended the first rally, June 6 at Traditions Plaza. She has worked as a custodian in the School of Music for nine years.

Holding a sign that read “Protect our jobs,” she said she would keep attending rallies to prevent MU from cutting their positions.

“Instead of starting at the top, with the ones that make hundreds of thousands of dollars, they are going to get us,” Stephens said. She said that having just turned 62, she would lose part of her Social Security if she had to retire early.

The consideration to outsource more jobs is a direct response to financial struggles MU has faced because of the COVID-19 pandemic, Basi said. He emphasized outsourcing is one of several options MU is looking into and job cuts and furloughs are happening at all levels.

Gov. Mike Parson has cut more than $123 million in state funding from the Department of Higher Education and Workforce Development in fiscal year 2020 to address budget shortfalls. Overall, the University of Missouri System lost $52 million, including $27 million from MU.

To alleviate financial strain, MU has laid off 124 employees and furloughed 2,644 more as of Wednesday. In addition, 1,923 employees have taken voluntary or mandatory salary reductions, and 33 employee contracts will not be renewed.

MU has saved almost $14 million with these efforts.

“We are having to look at absolutely every possible option,” Basi said, “and that means looking at the potential for some very difficult decisions.”

Baysinger said he isn’t sure that COVID-19 is the true reason MU is considering outsourcing. Randy Wallace, who has worked as a custodian at the College of Veterinary Medicine for 10 years, echoed Baysinger’s uncertainty. He said that while he understands the coronavirus has caused financial issues, MU could look for resources from higher-up positions.

“It’s like a bobblehead up there, they’re so full of money,” Wallace said. “But if you want to cut the legs off ... , the bottom’s going to drop.”

After marching around the building, the group picketed at the corner of Stadium and Monk Drive. Some vehicles honked as they drove by; others pulled into the parking lot next to the group and professed their support.

Wallace said he’s received support from people in the community.

“I have walked with and talked to people who I have never, ever met before,” Wallace said. “Some neighbors that I have never seen before, they’ve come out and said, ‘Hey, we’re behind you. It’s just not right, what they’re doing.’”

Catherine Armbrust, director of the George Caleb Bingham Gallery and adjunct faculty member, came to the rally to show faculty support for workers, especially those who have been employed by MU for several years.

“A lot of our spaces are very specialized spaces, and it’s important that the people who are working within them understand how to operate within those spaces,” Armbrust said. “So to privatize that is going to take away that personal knowledge as well as that emotional intimacy.”

Lydia Schreiber, a second-year graduate student in the College of Engineering, said it’s also important for students to come to demonstrations in support of MU workers.

“If the university has to take cuts, they shouldn’t be putting it on the most vulnerable members of our community that make the campus so beautiful and run so smoothly,” Schreiber said. “I mean, these people take care of us and keep our campus clean.”

About a dozen companies submitted proposals, which were due Monday (earlier deadlines were extended). Basi emphasized that no decision has been made yet.

“Every last one of us has a story. We’ve got families, we’ve got bills to pay,” Robinson said. “It’s like we got used and now we’re getting thrown away.”

The rally on Traditions Plaza drew MU custodians, landscapers and other workers and supporters.