Luis Carlos Flores and Jonathan Moore are pursuing their PhDs in mathematics at MU, and they have to teach students regularly in person.

Their responsibilities put them on the front line of potential exposure this fall to two highly contagious respiratory infections — COVID-19 and the flu.

Flores mentioned that he teaches three classes with around 35 students on any given day, which to him is a sizable number of people on a weekly basis. It is the same for Moore, with around 29 students each day.

“As much as I would like to trust my students, I am concerned that some of them will show up to class with COVID thinking they just have the flu,” Flores said.

COVID-19 and the flu are contagious enough to spread by human contact. Both being respiratory viral infections as well, a lot of their symptoms overlap.

This means that a regular body-ache, cough and headache can be either the flu, COVID-19 or both. Some other symptoms common to both can also include a runny nose, chills, fatigue and fever.

Flores added that some people being vaccinated against COVID worries him too.

“The vaccine helps defend people against severe COVID. But in the case of a breakthrough infection, the symptoms will be mild. I am concerned people will misidentify them as the flu,” he said. 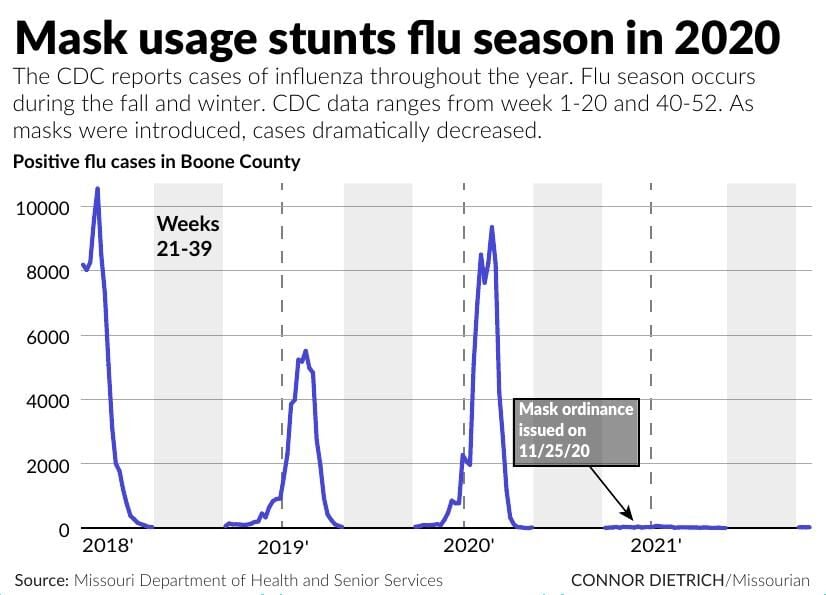 Last year, health care professionals were apprehensive of a possible “twindemic” during the flu season. But CDC data revealed that 2020-21 flu cycle had unusually low cases despite high levels of testing both globally and in the U.S.

Weekly updates on the Missouri Department of Health and Senior Services show there were around 1,800 reported positive cases of influenza in Missouri during roughly the same time period. This was reportedly 99% fewer cases than the previous flu cycle, and 98% fewer than 2018-2019.

In Missouri, the years before the pandemic had anywhere between a 100 to 300 flu-related deaths during the winter months. But the most recent flu cycle of 2020-21 claimed a historically low number of only three deaths.

“Last year’s lower activity was partially due to citizen awareness of (COVID) protection measures, such as social distancing, frequent hand washing and avoiding the public when sick,” said Lisa Cox, communications director of the state Health Department. “Additionally, a record number of flu vaccines were distributed in the United States last season, which likely reduced flu illnesses even further.”

“Come November or December, (COVID-19) cases may go back up with the cold weather,” said Scott Clardy, former assistant director of Columbia/Boone County Department of Public Health and Human Services, during a Zoom session with the Muleskinners in September. “It might be a long winter, and people would not be sure what (infection) they have.” 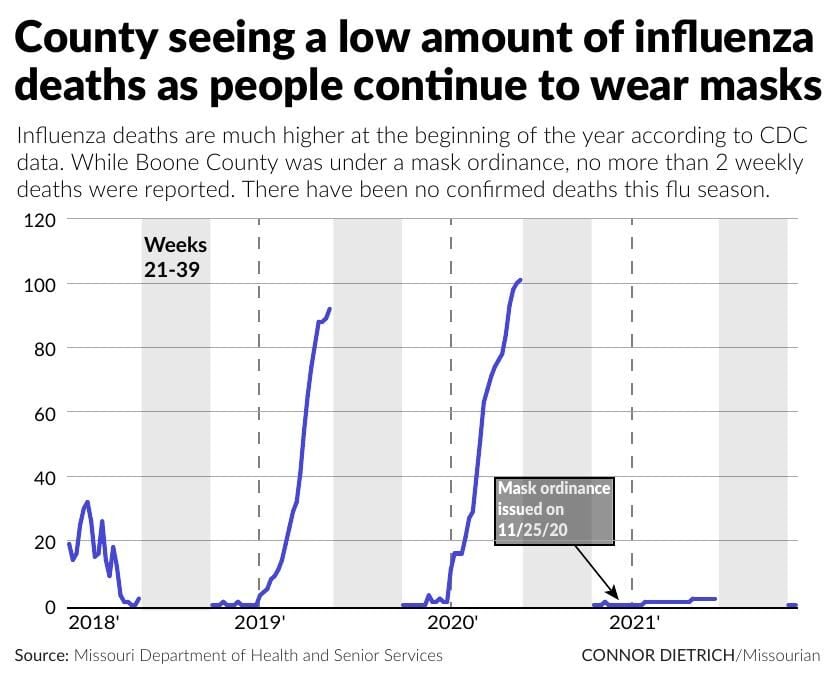 This makes Taylor Nelson, infectious disease specialist with MU Health Care, concerned about the current flu cycle. She said she was fearful that a mild and almost nonexistent flu season like last year might mean the opposite for this season.

“For the most part, there’s not any residual immunity from last year which we have in the general population. Starting out the flu season this year, we don’t really have a significant community level of immunity that it potentially could peak the earlier flu season,” she said. “And with relaxing mask mandates and other things, it has the potential to be a bad one.”

Nelson also echoed Clardy’s fears of how it can be really difficult to tell the difference between the flu and COVID-19 from a clinical standpoint, with the sole exception of getting tested.

“I would say with COVID, the loss of taste and smell is probably a more common thing,” she said. “We don’t usually see that with the flu, but it can happen.

“Generally speaking, the symptoms kind of start a little later in the course with COVID,” Nelson said, adding that it is always better to err on the side of caution and get a test or take necessary precautions.

Contracting COVID-19 also leads to slight reddish blisters on fingers or toes, which does not happen with the flu. But in case of dual infections moving into the peak flu season, it will be even harder to tell them apart.

“I anticipate we will see some coinfections, and those have the potential to be really bad. Especially for people who are at high risk, and have medical conditions or immunosuppression,” Nelson said. “That is another reason I really want to push getting the flu shot this year, as it can really protect from severe illness whenever they have dual infection.”

As of Nov. 8 in Missouri, there have been a total of two flu-related deaths and 587 positive cases of the flu this year.