*This story was updated to include information from a Jan. 6 press conference with Gov. Mike Parson.

A month after the approval of the first COVID-19 vaccine, some people are wondering when they can get vaccinated. For many, it may take longer than they expect.

Missouri is still in Phase 1A of its vaccination plan, which focuses on vaccinating residents and staff of long-term care facilities as well as patient-facing health care workers. At the end of December, around 66,000 people in this category had been vaccinated, with tens of thousands still waiting.

At least 7,000 health care workers in Columbia have received the first dose of the COVID-19 vaccine, according to hospital officials, with the first round of second doses beginning this week.

But even after all the people in Phase 1A have been vaccinated, there are still approximately 2 million others who have been prioritized for the vaccine before it becomes available to the general public.

Following 1A, Phase 1B focuses on vaccinating high-risk people and those over the age of 65, as well as essential workers.

First responders, child care workers and teachers are all included in this phase, as well as those working in essential fields like energy and food plants.

Missouri’s state vaccination plan estimates that around 1 million adults over 65 and nearly 1.3 million adults with high-risk conditions will need vaccinations during this phase. Across other priority populations, there’s at least another 925,000 people also needing vaccines during phases 1A and 1B. 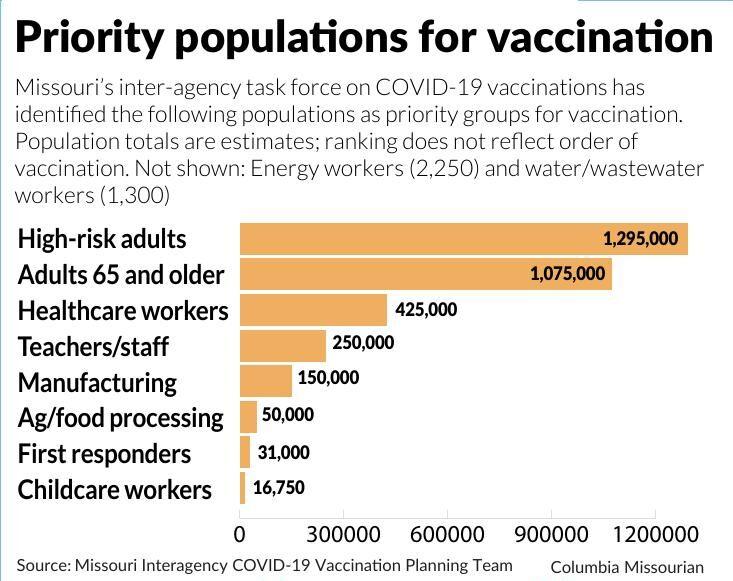 The Columbia/Boone County Public Health and Human Services Department is following the state’s lead. Phase 1B people will not receive vaccines until most Phase 1A people wanting the vaccine have received it statewide, according to department spokesperson Sara Humm.

After Phase 1B, Phase 2 addresses vaccinating other high-risk populations, such as prison and the homeless populations. Only after that will the vaccine become available to the general public in Phase 3.

Who’s been vaccinated so far?

Blount and Day, both of whom have received the vaccine, said no serious vaccine side effects occurred within hospital staff, citing only minor side effects similar to the flu vaccine, including slight fatigue or a sore arm in some cases.

Truman Veterans’ Hospital began vaccinating its staff Dec. 15, according to a news release from the hospital. The hospital began administering the second dose Tuesday to those who first received the vaccine three weeks ago.

Long-term care facilities in Columbia have also begun to receive vaccines for their residents and staff.

In total, the state received 314,000 vaccines in December, said Randall Williams, director of the Missouri Department of Health and Senior Services, at a Dec. 30 press conference.

The difference between the number of vials received and the number given out is based on how long it took to set up the partnership to distribute vaccines to long-term care facilities. The partnership with CVS and Walgreens to vaccinate these residents and staff didn’t begin until Dec. 28.

With the program up and running, Williams expects to see a boost in the number of distributed vaccines in coming weeks.

Once Missouri moves onto the next phase, however, Williams said vaccination rate may slow without the structure Phase 1A provides.

“It’s a lot easier to vaccinate everybody in one hospital than it is for 10 primary care doctors (to vaccinate) a community,” Williams said.

Both local and state officials are uncertain of the exact timeline for vaccine distribution for phase 1B and beyond.

Lisa Cox, communications director for the state Health Department, said in a Dec. 29 email that there was no set timeline for when Missouri may move into Phase 1B of the vaccination plan. When the state will be able to do so, Cox said, is dependent on the supply and availability of the vaccine.

*Williams said at a Jan. 6 press conference that the state was hopeful it could move into Phase 1B by the end of January but emphasized that the timeline changes frequently as new information comes in.

Day said the MU Health Care COVID-19 vaccine committee is hopeful the state would move to Phase 1B by the early spring, while Blount said it was too soon to tell.

“It’s (all about) how much vaccine is available and how we can get it distributed ... and then put it in the arms of people who need it,” Blount said.

The Columbia/Boone County Public Health Department said in a Monday Facebook post that the supply of the COVID-19 vaccine is limited and that the first phase is likely to take a few months. The department expects all adults in Missouri who want the vaccine to have received it at some point in 2021.

When asked when she thought the vaccine would be widely available to the general public, Blount said we “just aren’t there yet” with so many Phase 1 individuals still waiting.

“This is a marathon, and we’ll be working on this vaccine effort, I suspect, for the upcoming year,” Day seconded. “It’ll take us some time for us to achieve a place where we have enough protection.”

Protective measures such as social distancing, proper hand hygiene and avoiding crowds remain key in reducing the spread of COVID-19.

Officials from local hospitals and the Health Department are working now on plans for wide-scale rollout of the vaccine when the time comes.

When Missouri moves into the next phase of its vaccination plan, Columbia residents can expect to hear about it online from both the Health Department and local health care providers.

Humm said the Columbia/Boone County Public Health Department is planning a campaign with Bucket Media with the goal of making the public aware of the vaccine as well as how and when it will be available to them.

Both Day and Blount emphasized the importance of people getting the vaccine when it becomes available to the general public and of getting both doses of the vaccine.

Both the Pfizer and Moderna vaccine require two doses. Getting both doses provides about 95% protection from the virus, Day said.

“Getting only one dose probably puts you closer in the range of 50% or so” in terms of effectiveness, Day said.

“We just hope people can hang with us and be patient,” Humm said when asked what the department would say to those still awaiting their vaccine. “Our staff members are working diligently. ... We want this just as much as they do.”

CVS partnered with South Hampton Place in Columbia and its sister company to administer the COVID-19 vaccine.