This story was updated at 4:23 p.m. to say that Boone County saw the highest single-day total of new coronavirus cases on Thursday thus far and to add comments from Health Director Stephanie Browning and Fifth Ward Councilman Matt Pitzer.

Mayor Brian Treece spoke candidly about a proposed ordinance the Columbia City Council will consider Monday that would require people to wear face masks in public and private settings where they are in contact with people who are not members of their households. 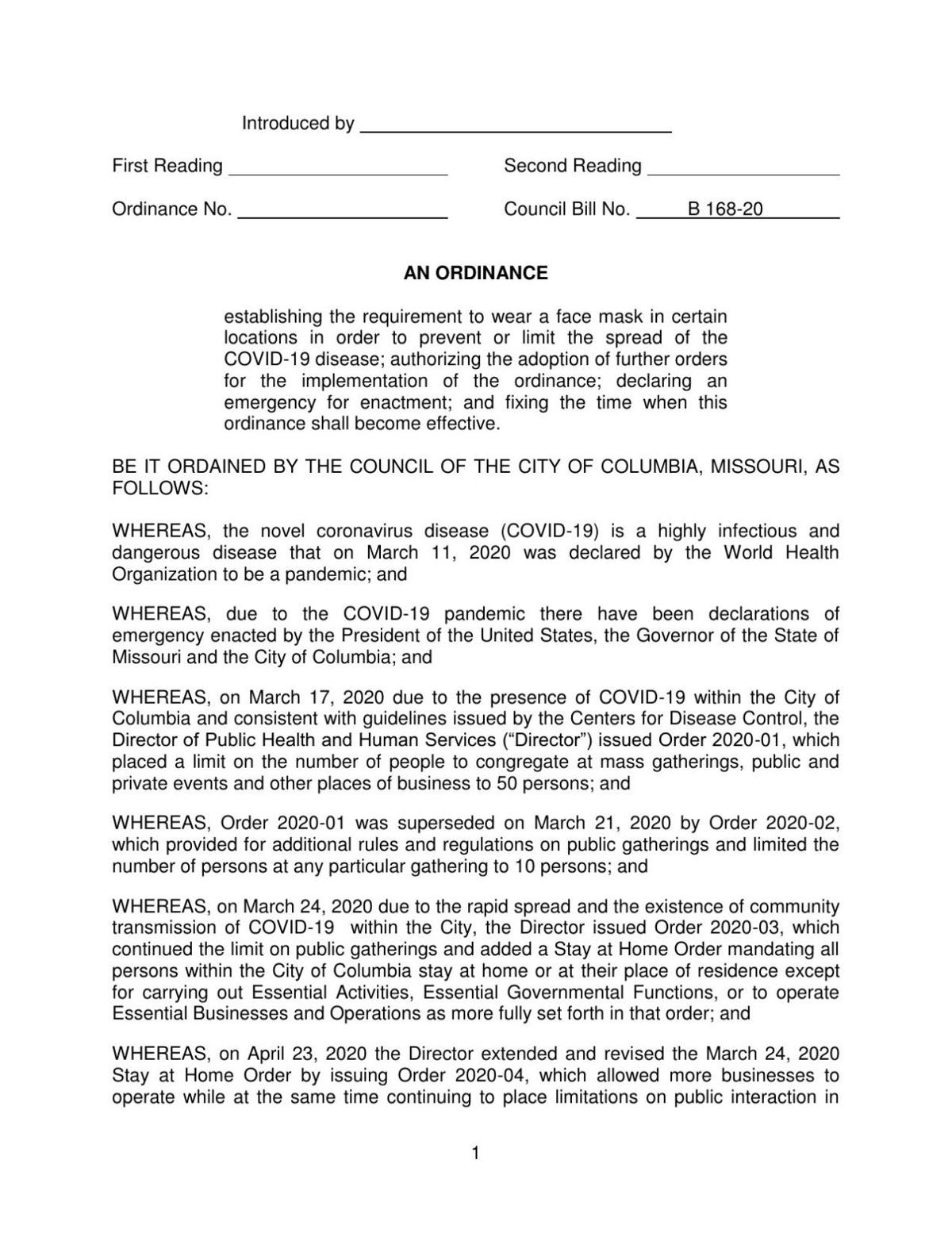 Treece began the news conference Thursday with some grim statistics about the recent surge in COVID-19 cases in Boone County. He noted that the first 100 cases in the county took 55 days to accumulate. The next 100 took 26 days. The third one hundred, just 14 days.

“Our contact tracing efforts have quickly become overwhelmed and positivity rates continue to climb,” Health Director Stephanie Browning said in a news release. “We are working closely with our city and county partners to implement additional mitigation measures in order to avoid returning to more strict regulations.”

On Tuesday, the state of Missouri surpassed 1,000 deaths.

Treece at his morning news conference attempted to dispel theories that this jump is simply due to increased testing. He posed another statistic. Columbia/Boone County’s seven-day rolling positivity rate — the percentage of individual tests that have positive results for the virus — was 0.4% in the first week of May. In the past seven days, it was 12.2%. That’s nearly one in eight people.

“Anything over 1% indicates widespread transmission in the community,” Treece said.

Treece said the contact-tracing and disease-investigation goals of the Health Department are not being met because of the number of cases the city and county are seeing.

“But wearing a mask is not just good for public health,” he said. “It’s also good for our economy.”

Treece noted that Texas and Florida were forced to close bars due to the recent and rapid spread of the virus. This has resulted in a huge hit to their economies. New York has limited indoor dining, and Kansas has limited gatherings of more than 10 people.

Kansas Gov. Laura Kelly issued an order Thursday directing residents of that state to wear masks in public places and their workplaces.

Treece cited a Goldman Sachs report that said a nationwide mask mandate could prevent a 5% hit to the country’s gross domestic product.

The afternoon news release said that “at this time, Boone County is not achieving all of the necessary criteria to recover from the COVID-19 pandemic, but it’s not too late. PHHS is asking the entire community to come together to slow the spread of COVID-19 cases in Boone County. Whether you are doing so to protect your loved ones, yourself or our community, each one of us can do our part so that we can eventually return to life as we knew it before the pandemic.”

To curb these disturbing trends, the mayor and the Health Department are proposing an ordinance requiring everyone 10 or older to wear masks in public or private settings in which they gather with people they don’t live with. There will be exemptions for those with medical conditions that prevent wearing a mask, and people could remove masks to eat or drink at a restaurant or bar, play sports or exercise outdoors, receive dental examinations or other services, and communicate with people who have hearing impairments.

Masks could also be removed at the request of a police officer or medical professional or when it is necessary to confirm someone’s identity.

Businesses would be required to provide their employees with masks. Penalties for disobeying the ordinance are $15 for individuals and $100 for businesses.

The Columbia City Council will vote on the emergency ordinance Monday night, and it would take effect immediately if six of the seven members approve it. It would remain in effect for 90 days but could be extended or shortened depending on coronavirus trends.

Treece was frank about the ability to enforce the ordinance.

“My sense is it will be like riding your bicycle on the sidewalk,” he said. “Is it wrong? Yes. Do people do it? Occasionally.”

Treece said he believes the ordinance would vastly increase mask usage and foster a culture of mask-wearing in the city, not ensure 100% compliance.

“Do we enforce the laws that say employees must wash hands after they use the restroom? Of course not,” he said. “Police aren’t standing there checking to make sure you wash your hands. What we do is set a community expectation and a community standard that good hygiene is part of our community ethos.”

Treece hopes the ordinance would integrate mask-wearing into the community ethos.

Fifth Ward Councilman Matt Pitzer said that overall he supports a mask mandate, although he wishes it weren’t necessary. He’s unsure whether he’ll vote to approve it. Some of his reservations include the fact that it would extend over 90 days and that it would apply to gatherings in people’s homes.

Still, Pitzer said, “if we aren’t able to do something to control the numbers, we might have to consider more dire actions like the things you’re seeing in Florida and other places.”

Treece said there would be no extra enforcement efforts at MU or other college campuses, to which 30,000 students are anticipated to return in August. He said he has spoken with MU officials and wants to get a mask ordinance on the books well before the school year begins.

“That’s one of the reasons I want to do this now,” he said. “I think it’s good that we take this step in July, if council approves.”

MU students will already be required to wear masks on campus in the fall semester.

The City Council meeting is scheduled for 7 p.m. Monday in the council chambers of the Daniel Boone City Building, 701 E. Broadway.

The ordinance needs a favorable vote from six out of the seven City Council members Monday to go into effect.