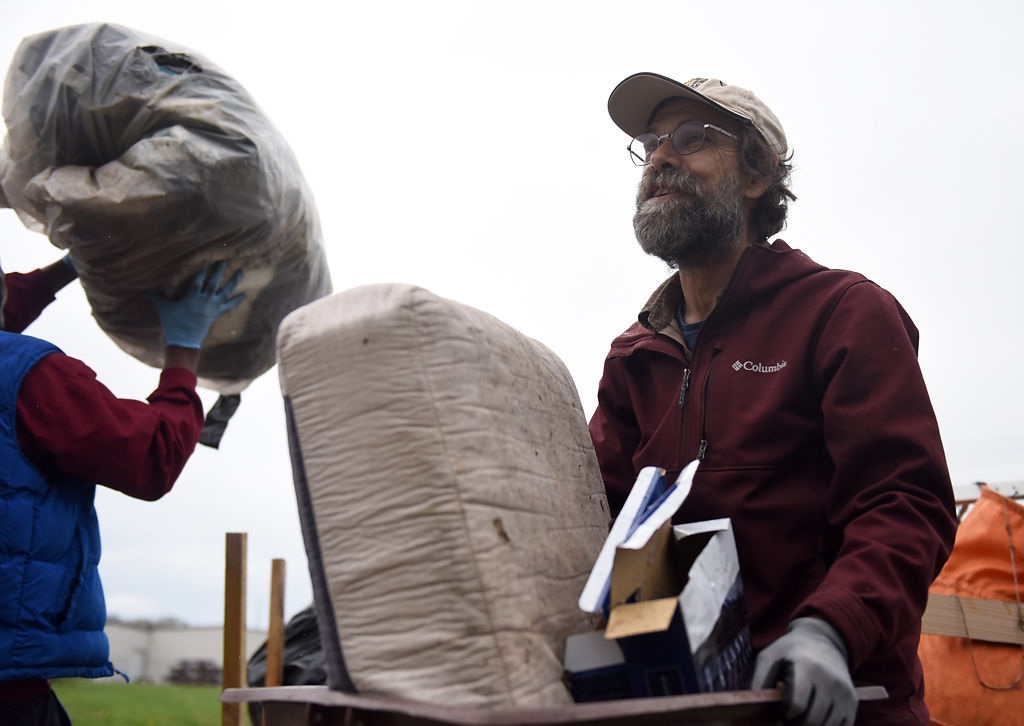 John Trapp, who organized a cleanup of abandoned homeless camps, carries a box of trash to a trailer April 11. Trapp said the cleanup emerged from an effort to find the homeless a place to sit out the pandemic. "Everyone deserves to have a place to feel safe." 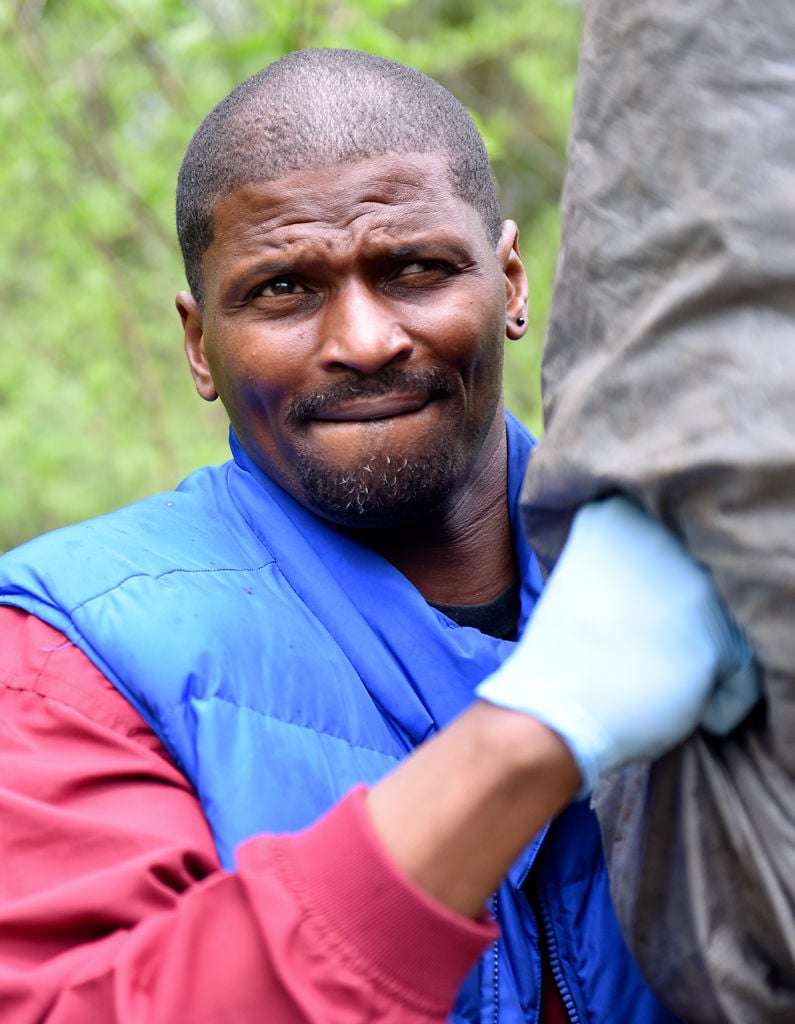 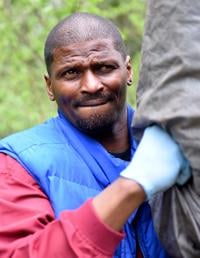 A volunteer who goes by Kee carries trash from an abandoned campsite April 11. Kee said he doesn’t define himself as homeless because his home is wherever he is. "I think the responsibility falls on us as a community," Kee said. "Every last one of us has the power to change our circumstances. People shouldn’t have to live like this." 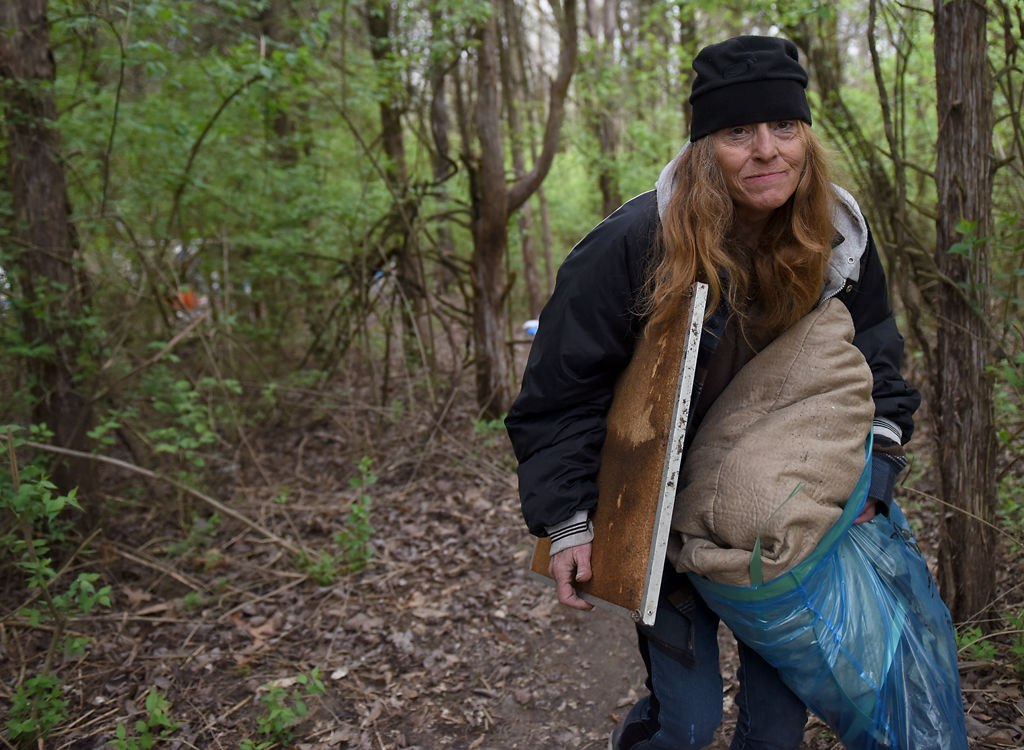 Volunteer Diana Welch carries items out of an abandoned campsite. Welch said the homeless have to struggle with everything from finding a place to sleep at night to getting proper medical care. Welch said she broke her arm in an accident. “I don’t have insurance, so it is still broken,” she said. “I can’t imagine they’d be much help if I got sick from the coronavirus, either.” 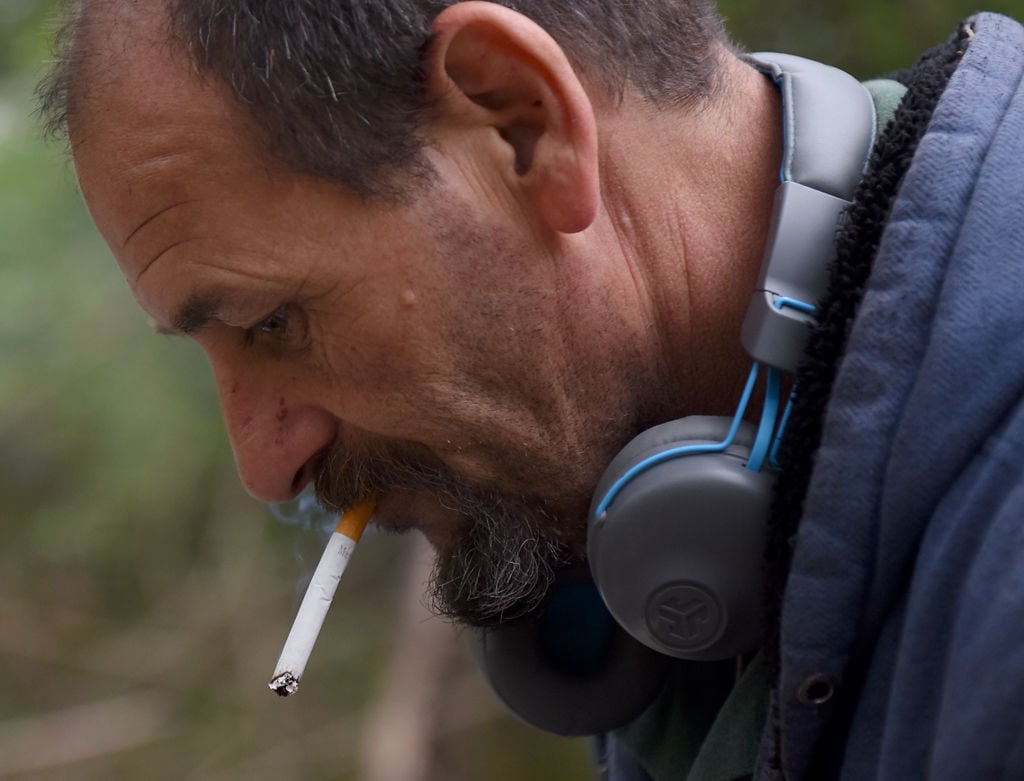 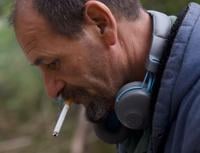 Bobby Hall smokes a cigarette while looking at things left behind by his friends who lived in this camp eight years ago. On April 11, Hall joined in the effort to clean up old camps. Hall said homeless people are seen as this problem "to" the community rather than a problem "in" the community. "Maybe this will help our image," he said. 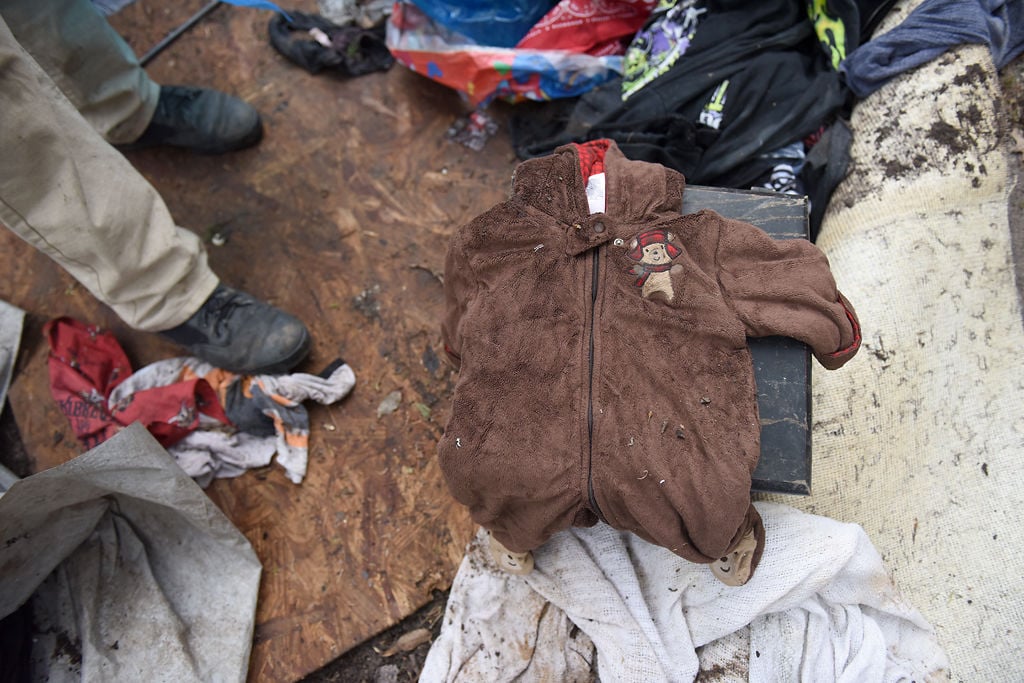 A baby outfit lies among abandoned items at a homeless campsite in Columbia. Bobby Hall, a friend of the family that once lived here, said they left soon after their child was taken away from them. 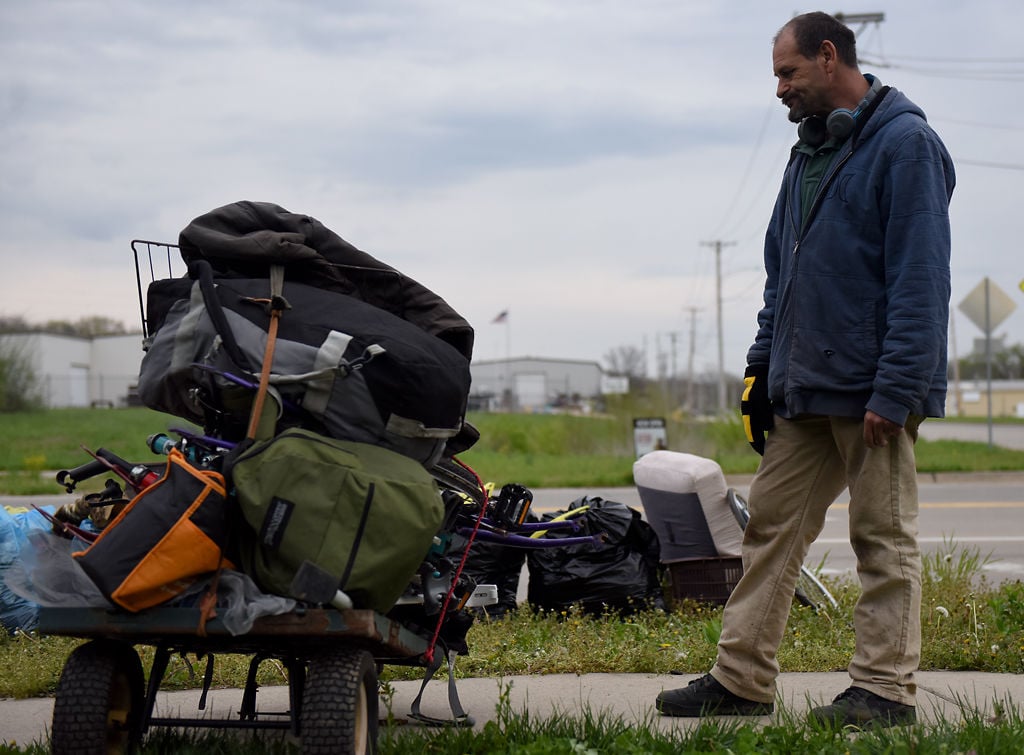 Bobby Hall looks at a wagon of abandoned items he collected from his friends' old campsite April 11. Hall said he set these items aside to bring back to the family that lived there. "I like to help where I can," Hall said. "I think some of this will be really valuable to them." 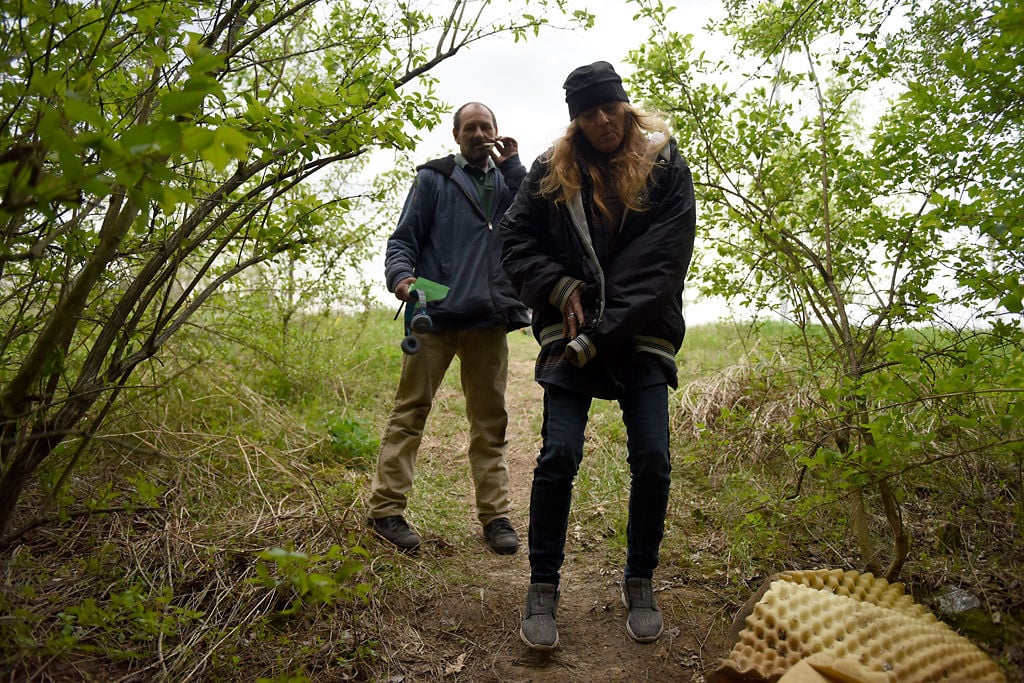 Bobby Hall, left, and Diana Welch walk down a path to a familiar campsite April 11. Hall said the coronavirus has amplified problems within the homeless community. "I’ve had cops tell us we need to get off the streets for the public health," Hall said. "But where are we supposed to go?" 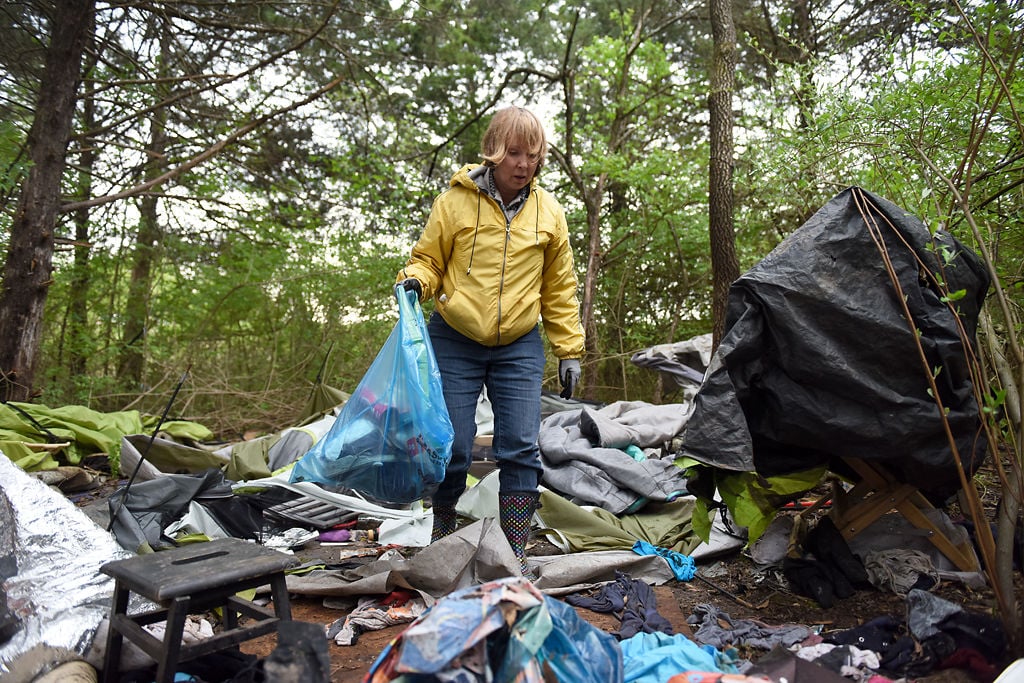 Flo Osborn steps through a homeless campsite in Columbia. Osborn was among a group of volunteers who led the effort to clean up abandoned campsites. A mix of volunteers pitched in, including a school board candidate, the John Brown Gun Club, a city councilman, members of Operation Safe Winter and some of the community’s unhoused neighbors. 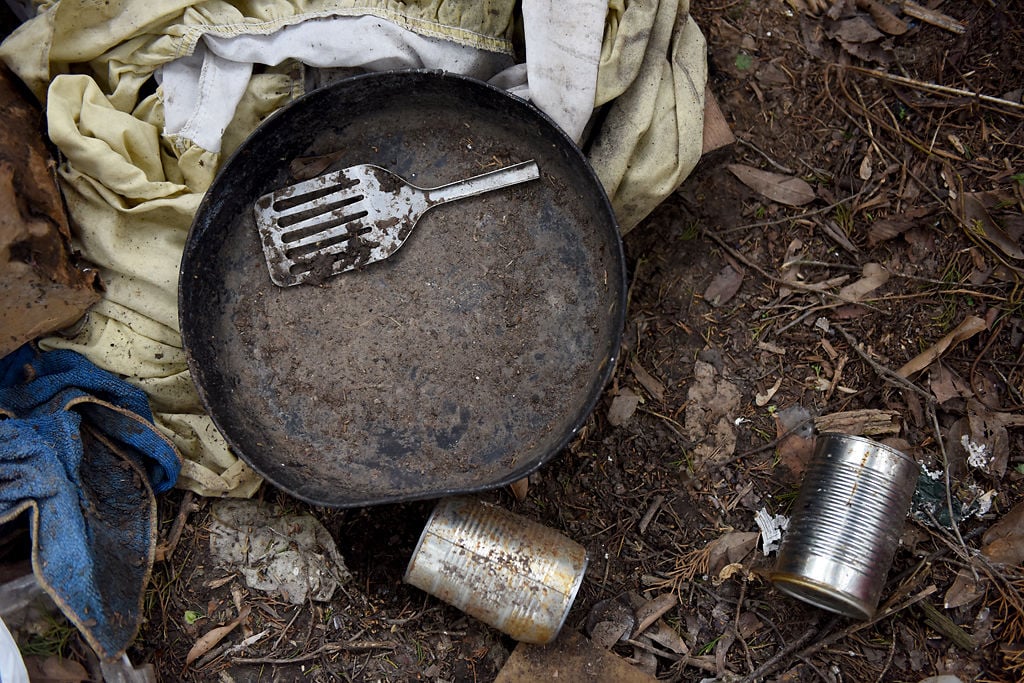 Household items remain at a campsite after the residents left. Cleanup organizer John Trapp said some people receive boarding or just move on, but often families are forced out of the area with nowhere else to go. 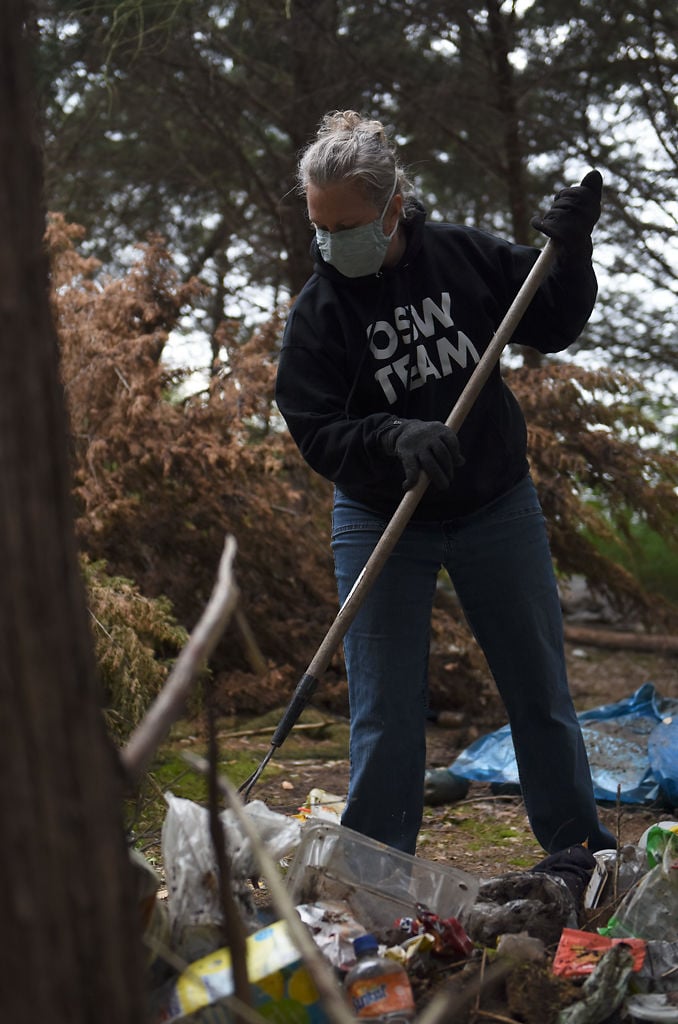 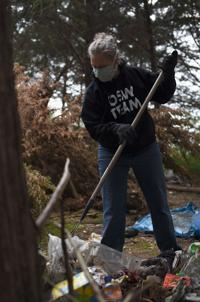 Community volunteer Dawn Finney rakes a pile of garbage April 11 at the abandoned campsite. Finney said it is hard to see the conditions in which people have to live. "When I first saw the site, it was like a punch in the stomach," she said. "But it’s not like these people have trash services." 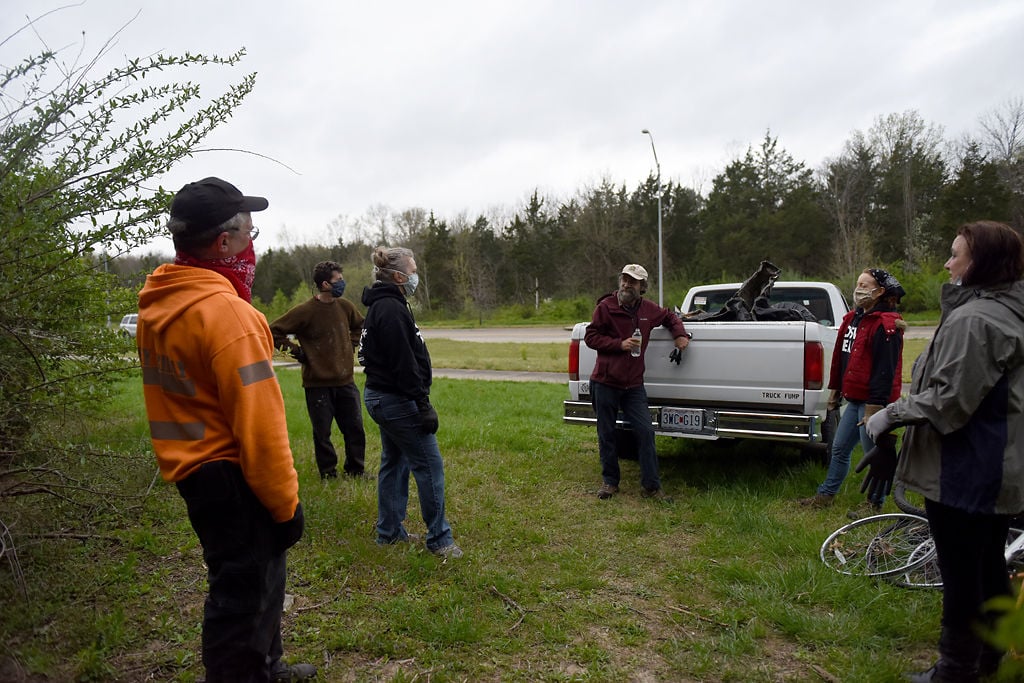 John Trapp talks with some of the volunteers at the end of the cleanup April 11. The volunteers filled up a 15-cubic-yard dumpster in about two hours. They could have filled many more. Because of the success of this cleanup, Trapp plans to host one the second Saturday of every month until winter. 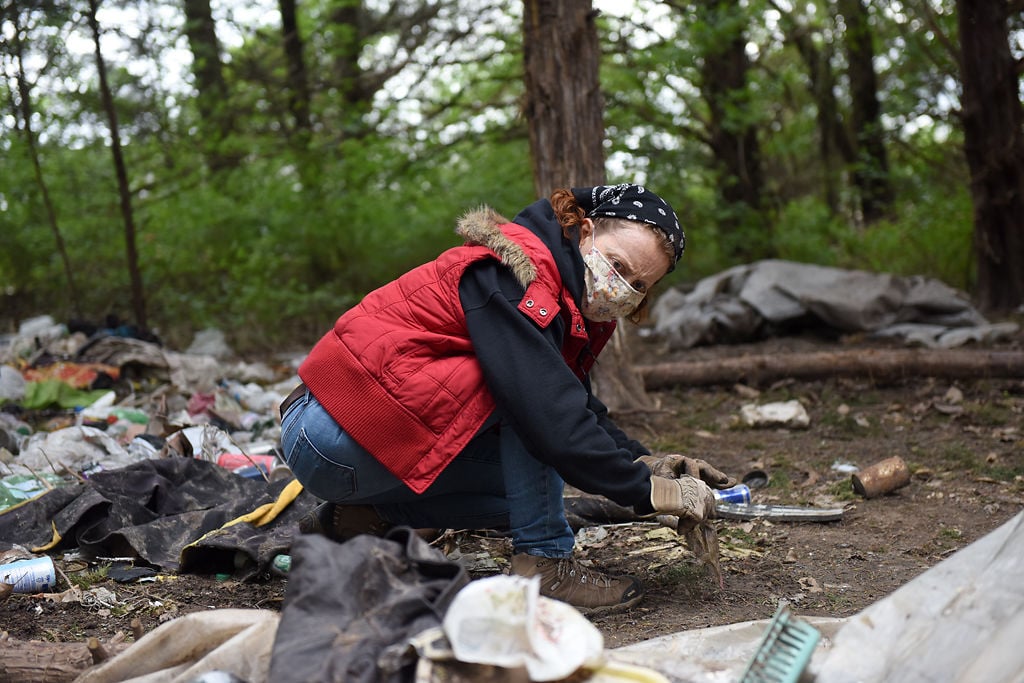 Volunteer Renee Maxwell picks up trash April 11 in an abandoned campsite in Columbia. Maxwell regularly volunteers with Operation Safe Winter. “We just want to help in whatever way we can,” she said.

After a dozen volunteers walked down Providence Road last Saturday to clean up debris left in homeless camps, they filled a 15-cubic-yard dumpster in about two hours.

The camps were hidden in the tree line and undetectable from the road. Their effort barely made a dent in the trash that was left behind.

Trapp organized the initiative to clean up abandoned camp sites. The group of volunteers included members of Operation Safe Winter, the John Brown Gun Club and unhoused and homeless people.

”We need to do what we can to help ourselves if we are going to expect anyone else to help us,” said a volunteer who goes by Kee. He identified himself as “unhoused.”

“I have an issue with the term homeless,” he said. “My home is wherever I am.”

The campsites were littered with all manner of things left behind by former inhabitants. Volunteers walked through the camps, stepping over clothing, books, tarps, bedding, notepads, cookware, toys and other items scattered on the ground.

“You would think that people would have more appreciation for God’s land,” homeless volunteer Diana Welch said. “But people that don’t have a lot of stuff usually have a harder time throwing things away.”

The cleanup was launched after Safe Camp, a temporary homeless camp at Providence and Blue Ridge roads, was shut down after neighborhood complaints.

John Trapp and his brother, Second Ward Councilman Mike Trapp, set up the Safe Camp. They also operate AAAAChange, which reaches out to provide services to the homeless.

John Trapp said the problem with finding solutions for the homeless is that many people see them as a threat rather than a population in danger.

Safe Camp was the Trapps’ attempt at a solution to the challenging effort to find safe housing options. The Trapp brothers had opened CoMo Crisis Shelter at the Welcome Inn on March 26. The shelter closed April 3 because of the overwhelming demand.

There were 265 homeless people in the community in 2017, according to the city of Columbia’s Division of Human Services. Of those, 44 were unsheltered.

The Trapps opened a CAR camp over the weekend at the former Mid-City Lumber building at 2105 Paris Road. Mike Trapp said the location provides health monitoring in addition to a safe space to live during the COVID-19 pandemic.

“We want to make a real effort to head off a broader community health crisis,” Mike Trapp said. He worries that without sufficient safe shelter options, members of the homeless community are at higher risk of getting infected and spreading the virus among themselves.

Diana Welch, another homeless volunteer, said she was not treated for her broken arm because she did not have health insurance.

“I can’t imagine they would do much for me if I came in feeling sick,” Welch said.

“We need to help our unhoused neighbors,” Trapp said.

Trapp will organize cleanup efforts on the second Saturday of every month in an effort to restore the sites and the image of those who inhabited them. (tncms-asset)8f8a8fec-7de6-11ea-a178-933d5ef2df6a[10](/tncms-asset)

GUEST COMMENTARY: Columbia could seize timing of pandemic to strive to end homelessness

Federal funds related to the COVID-19 pandemic are coming at a time when we could mend the social safety net.