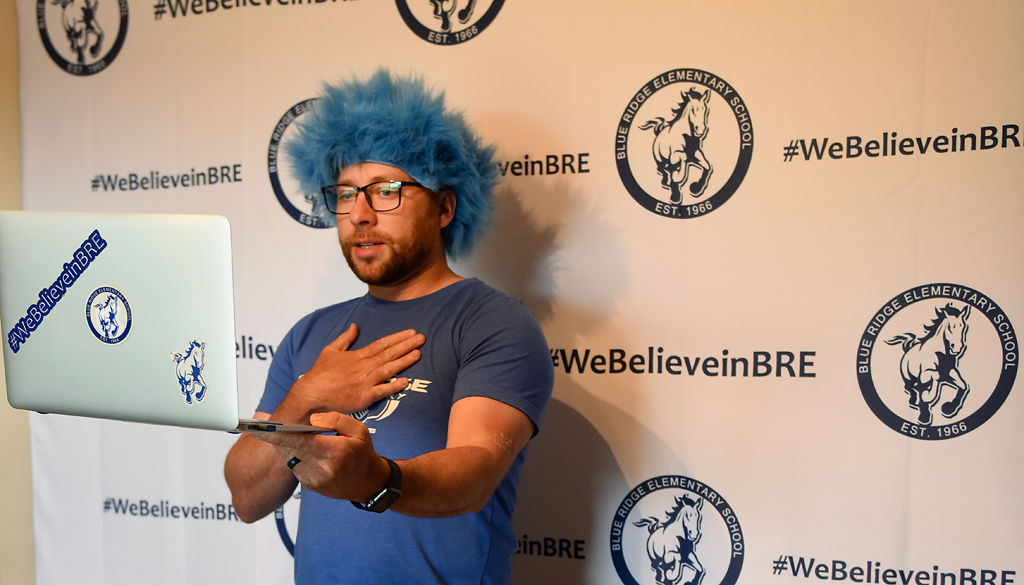 Blue Ridge Principal Mark Burlison says the Pledge of Allegiance while recording the morning announcements Thursday in his basement office. Burlison said he always wears the blue wig during the announcements to bring smiles to the children. “We are trying to keep things as routine as possible in such a crazy time.” 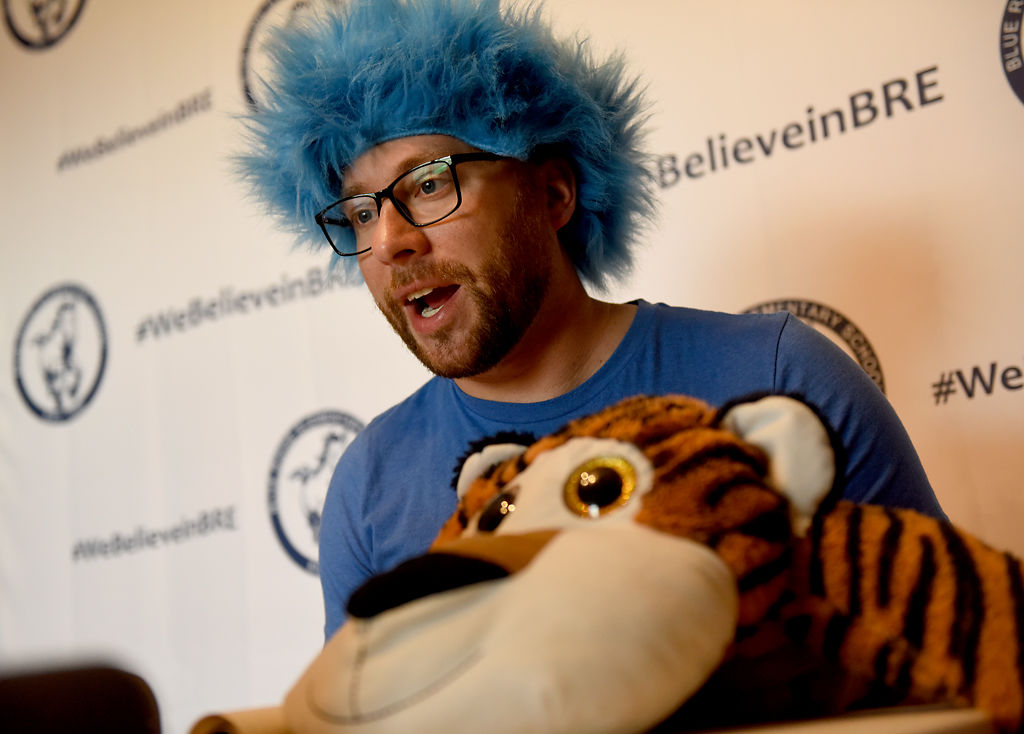 Blue Ridge Principal Mark Burlison introduces Bear the tiger during spirit week announcements on ‘Read with a Stuffed Animal Day” on Thursday. “You don’t have to stand six feet away from a book,” Burlison said. “Read with your stuffed animal outside.” 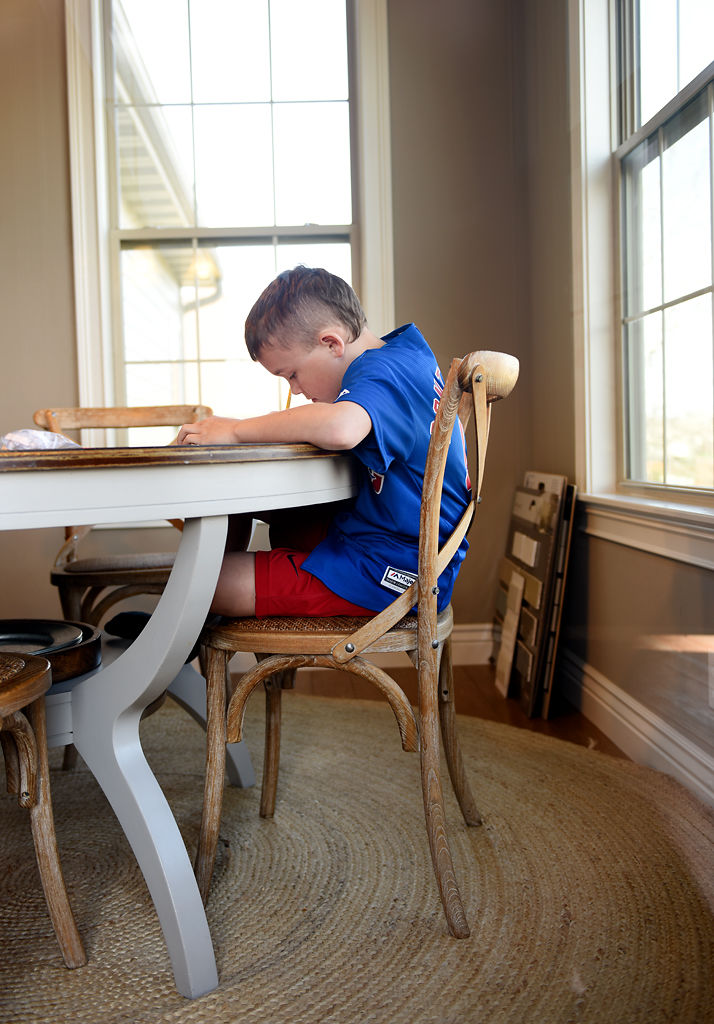 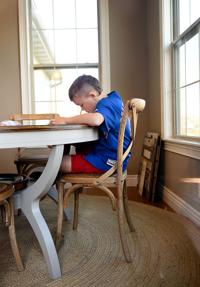 Madden Kurowski, 9, a student at Beulah Ralph Elementary School, works on his school packet at the breakfast table Thursday at his home. Kindergarten through fourth grade students have been given a packet with math, science, social studies and reading assignments. “I think it’s a little harder for the younger ones because they are given this big packet that can be a little overwhelming,” Madden’s mom Valerie Kurowski said. “But [my oldest son] regularly helps him and they play with each other which makes things easier.”{/span} 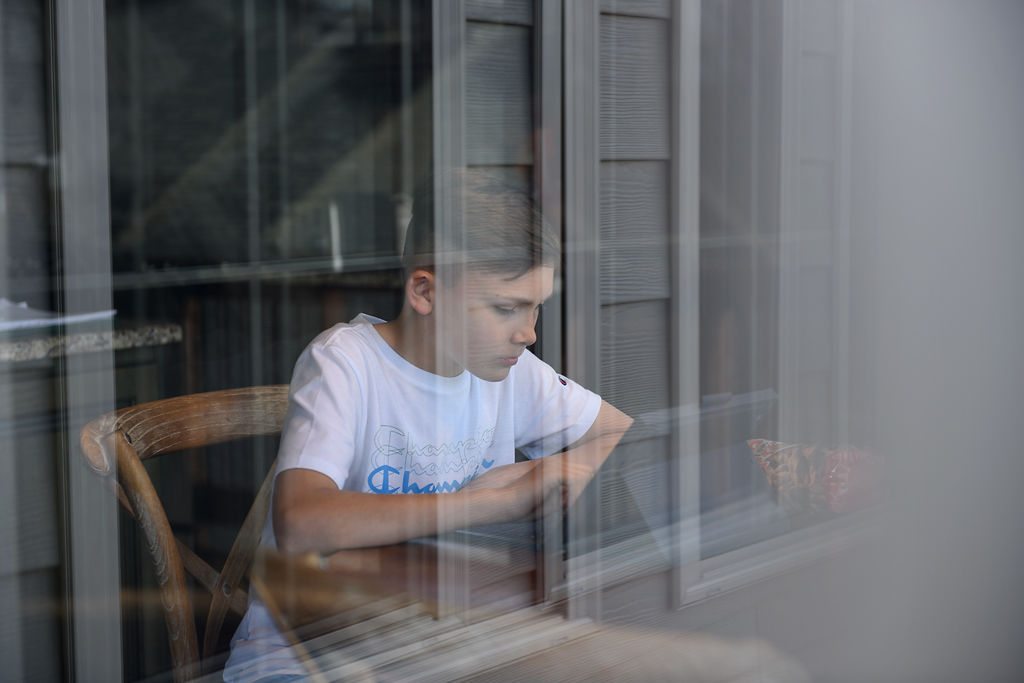 Garyt Kurowski, 12, a student at Gentry Middle School, works on his iPad at the breakfast table Thursday at his home. Garyt wakes up early when there are fewer distractions. “He has dyslexia so he works hard to get things done early,” said Garyt’s mom Valerie Kurowski. 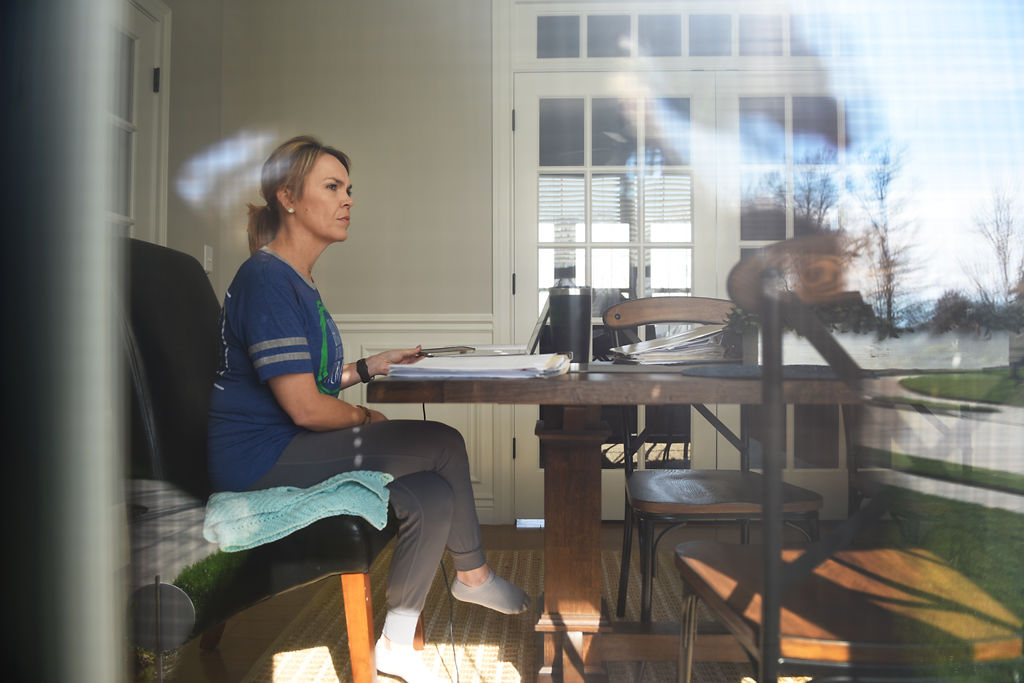 Valerie Kurowski, a speech therapist at Shepard Boulevard Elementary, calls into her Zoom meeting with the school’s special education team. Kurowski says the transition for her kids has been easier with her background as a teacher. “We want to make sure to support our students that we cannot be there with, too.”

Every morning at Blue Ridge Elementary School used to begin with the breakfast show at 8:20 a.m.

“Fifth-grade students would do it every morning. ... They’re in charge of it,” Blue Ridge Principal Mark Burlison said. “And what’s cool is that they take it on with pride.”

When Columbia Public Schools announced a transition to remote learning last month in response to COVID-19, Burlison found his students without a breakfast show and a way to consistently connect with their teachers and school.

Like Burlison, staff and students across the district are without the regularity of a traditional school environment. Along with alternative learning, teachers, administrators and students are finding other ways to connect, whether that be through spirit weeks, the TikTok app, postcards or virtual book clubs.

For Blue Ridge, that meant finding a way to continue morning announcements.

Burlison and Assistant Principal Kristina Contrades now host the show; they share the weather forecast, the lunch menu at district Grab-and-Go lunch stops, fun facts and jokes for the day. The videos are posted on YouTube and Twitter and sent out to all families in a text at about 9 a.m.

“They get to see us being ridiculous,” Burlison said, flaunting the fluffy blue wig he wears on the show.

“The main goal is to keep kids remembering and wanting to be in school,” Burlison said. “We have to give grace to everybody and just have a little fun and really enjoy what we can control. So what we control is the morning show.”

Terrence Walker, a Blue Ridge school counselor, created a TikTok for students for “rainbow day” of spirit week. He said TikTok was out of his comfort zone, but he knew it would make students feel good.

“This dude is probably one of the best counselors I’ve ever met my entire life in a school setting,” Burlison said.

“We know that our school is their safe place. ... Getting our face out there as much as possible is not only keeping that relationship but also showing them that we still care about them,” Walker said.

Smithton Middle School, which regularly hosts Friday spirit days, found its own way to keep students and staff connected through virtual spirit days, something other schools across the country are doing on Twitter.

“A lot of the connections really happen like in those unstructured times ... when you’re talking to a kid in the hallway or you’re, you know, doing lunch duty or before school,” Smithton Principal Chris Drury said. “I think (the spirit week) is kind of capturing that in a little way, you know?”

Smithton made it a competition, and the other five district middle schools joined. Hickman High School and district elementary schools have also conducted their own virtual spirit weeks. Drury said the purpose was to “promote some connection across the district.”

Gentry Middle School Assistant Principal Alyssa Galbreath said participation would remind students that teachers were there for them.

“When you don’t get to physically be in somebody’s presence, you forget that they are a shoulder to lean on,” she said.

Brianne Noltie, an eighth-grade English teacher at Gentry, said as cheer coach and student council supervisor, students expect a lot from her when it comes to spirit week. Each day, Noltie has tweeted a different picture of her dog, Callie, in accordance with the day’s theme.

“My kids know that my dog is a big part of my life,” Noltie said. “To add that piece into the pictures has been cool.”

Garyt Kurowski, a sixth-grader at Gentry, said he goes all out for spirit weeks. He was eager to participate when he heard about the opportunity and said he liked seeing “how everybody’s doing at their house.”

Teachers across the district have written letters and created virtual book clubs, video discussion boards and bingo learning games, all in an effort to stay in touch with students.

McKenzie Skoog, a Parkade Elementary School learning specialist, sent postcards to her students to remind them she was thinking of them.

Many connections between students and teachers are happening on social media. We found some examples from various schools.

“I don’t know how many second- and third-graders get a ton of mail anyway, these days,” Skoog said.

She tried to include details about the students “so that they felt known and seen,” she said.

Tranna Foley, a library media specialist at Hickman, moved QPLit, a book club that typically meets over lunch in person, to Zoom. Now, the students talk about what books they’re reading at home.

“It was kind of fun and hilarious because we were talking about what we wanted to read ... , and they go, ‘Hold on,’ and they run over to their bookshelf in their room and they bring it back and hold it up,” Foley said.

Burlison said the opportunity now is to give students the same attention, just in a different way.

The decision comes after community feedback that what was being asked of students was beyond the capacity of families.