Skip to main content
You are the owner of this article.
Edit Article Add New Article
You have permission to edit this article.
Edit
Home
News
Sports
Opinion
Obituaries
Vox
Visuals
Special Sections
Classifieds
Subscribe
1 of 10 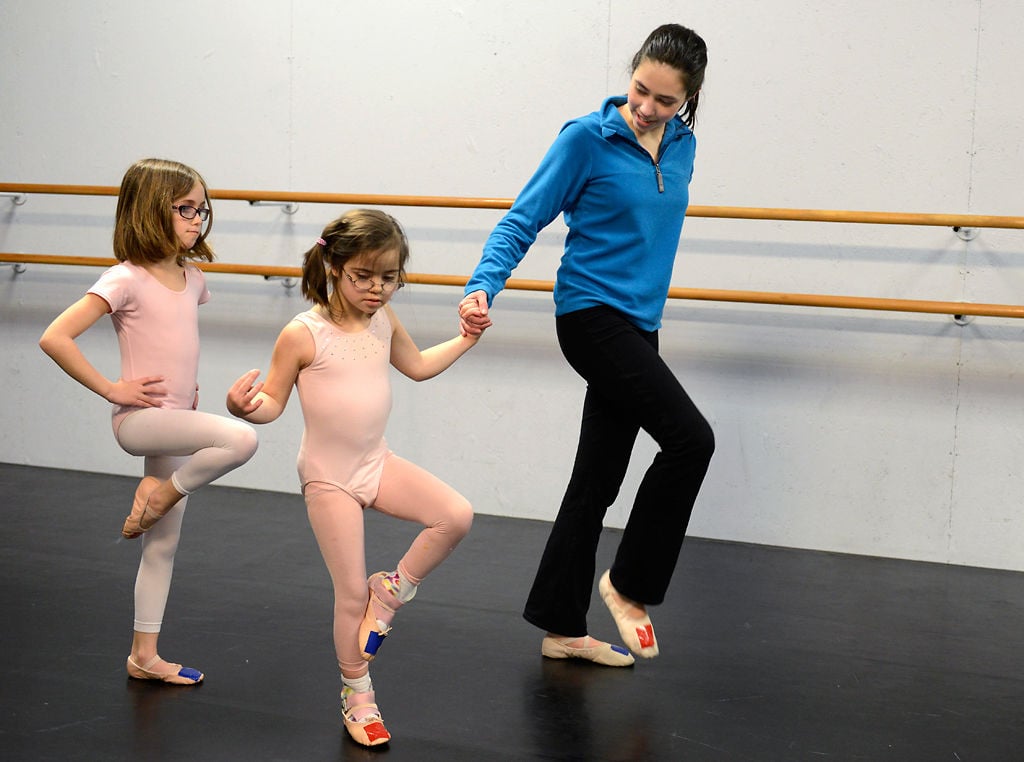 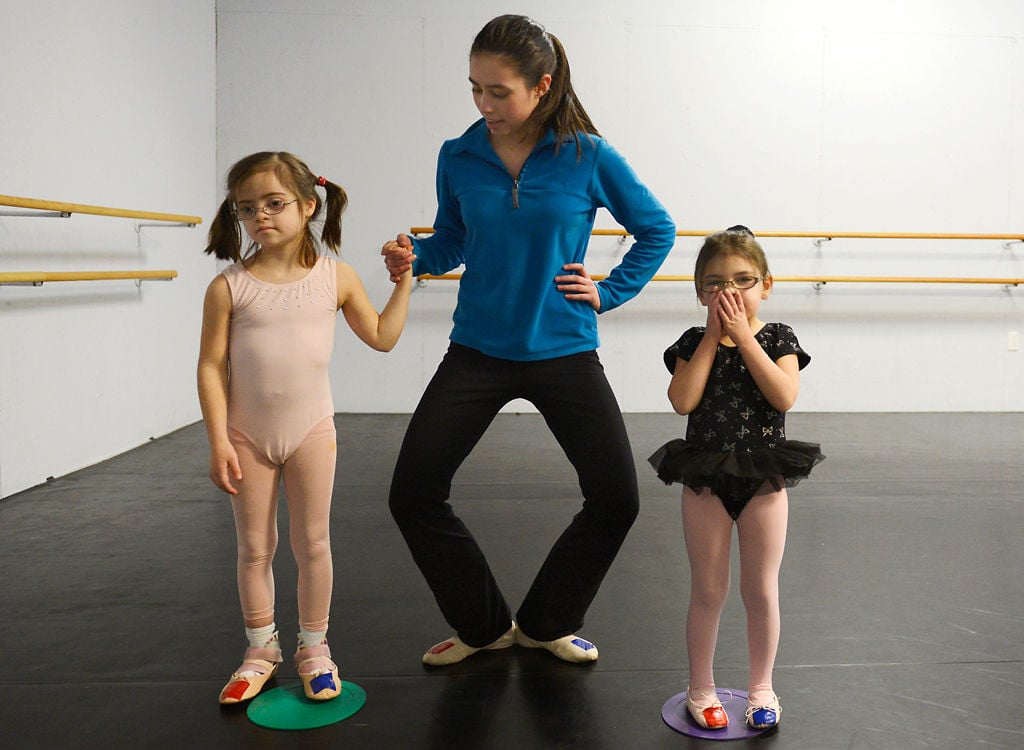 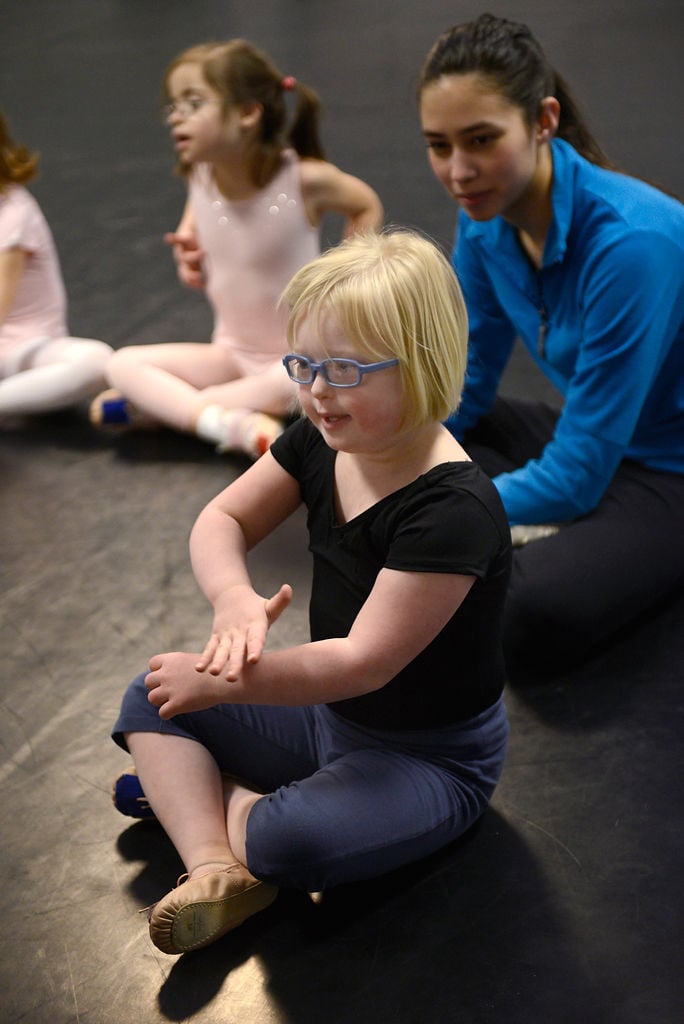 Olive Werth, front, and volunteer Kayla Glaser warm up in a circle before ballet class in March. The Missouri Contemporary Ballet formed a class for special needs children during the spring of 2014. 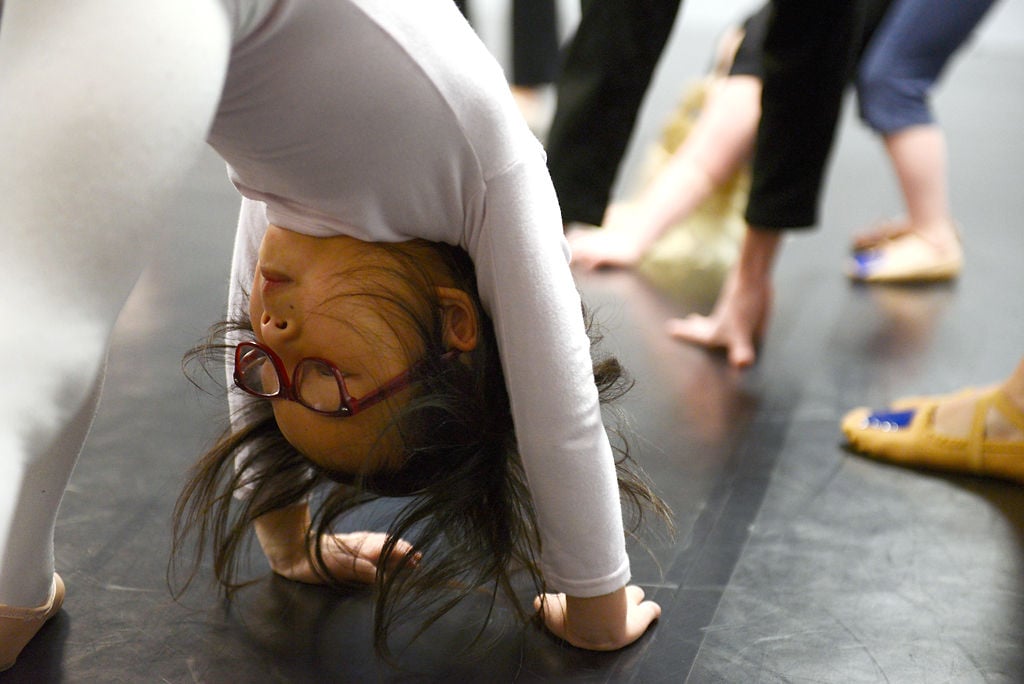 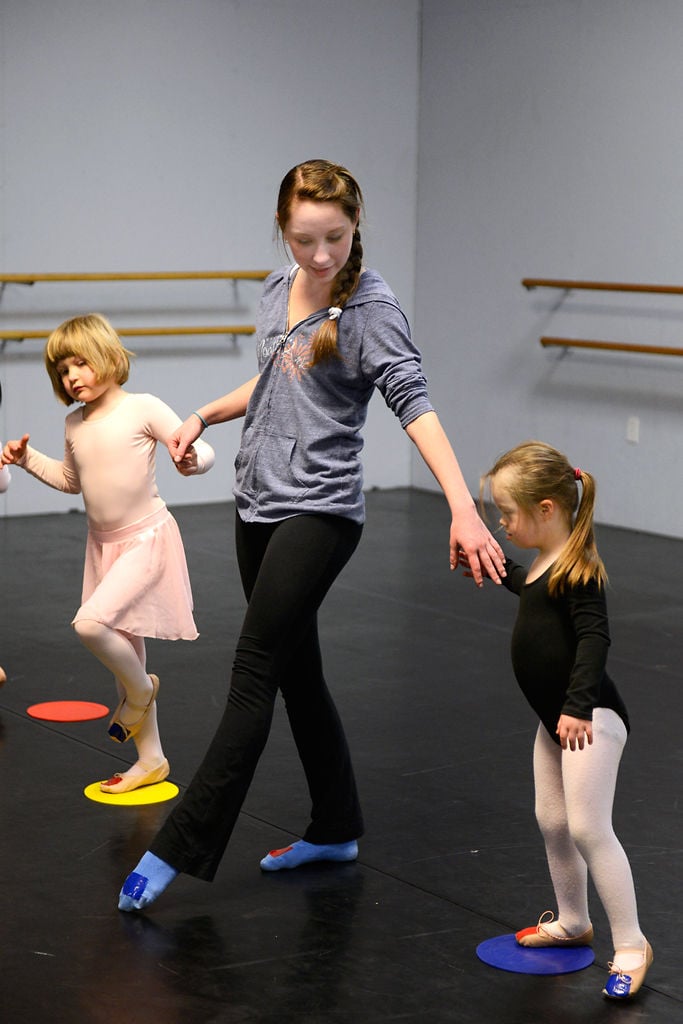 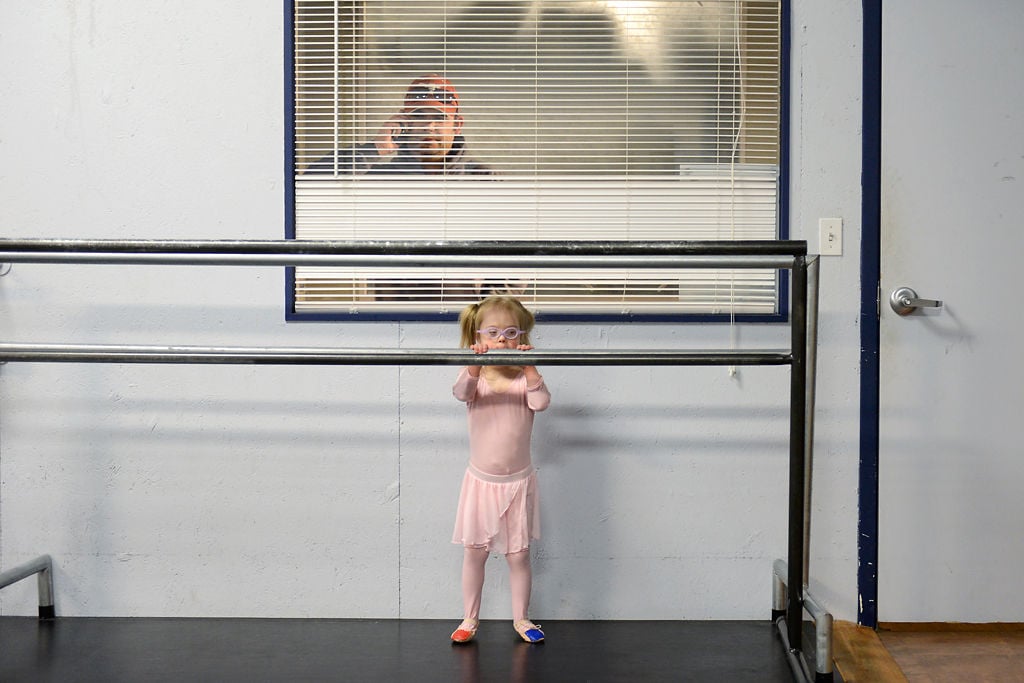 Participant Delia Buford waits for practice to begin in March. The Missouri Contemporary Ballet formed a class for children with special needs during the spring of 2014. 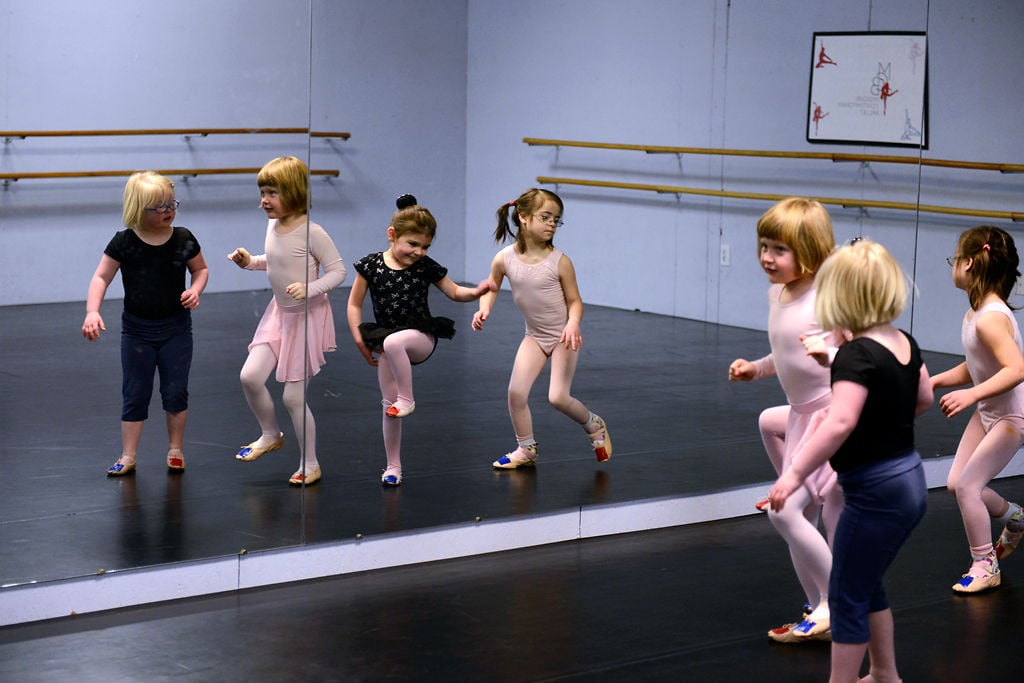 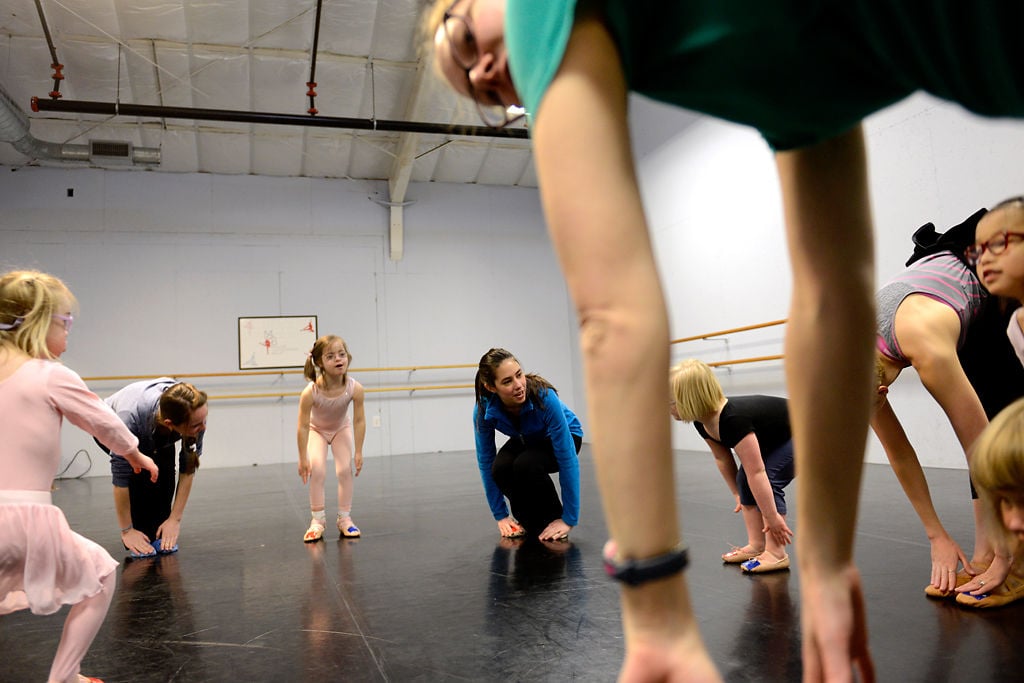 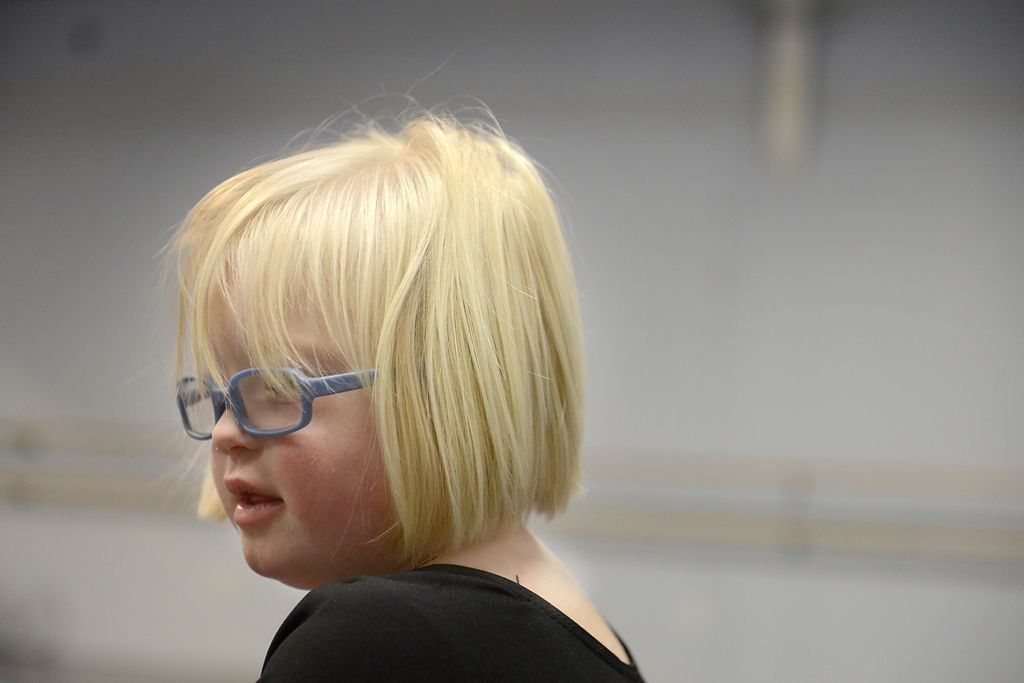 Dance student Olive Werth participates in DanceAbility in March. The Missouri Contemporary Ballet formed the class for special needs children during the spring of 2014. 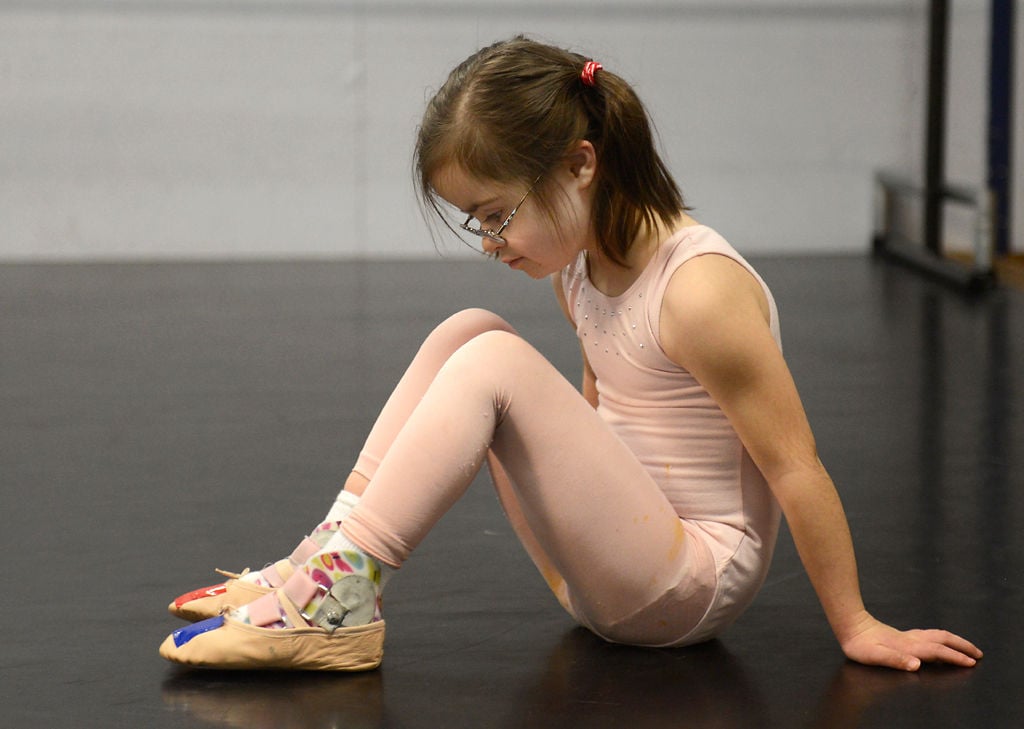 Ballet student Julianna Basi waits for class to begin. The Missouri Contemporary Ballet formed DanceAbility, a class for special needs children, during the spring of 2014.

Olive Werth, front, and volunteer Kayla Glaser warm up in a circle before ballet class in March. The Missouri Contemporary Ballet formed a class for special needs children during the spring of 2014.

Participant Delia Buford waits for practice to begin in March. The Missouri Contemporary Ballet formed a class for children with special needs during the spring of 2014.

Dance student Olive Werth participates in DanceAbility in March. The Missouri Contemporary Ballet formed the class for special needs children during the spring of 2014.

Ballet student Julianna Basi waits for class to begin. The Missouri Contemporary Ballet formed DanceAbility, a class for special needs children, during the spring of 2014.

COLUMBIA — Before Amelia Maltsbarger walked into dance class on Jan. 13, her dance teacher Caroline Euker stuck a piece of blue duct tape on her left ballet slipper and a piece of red on her right.

That way, Euker could call out "blue foot, red foot," instead of "left foot, right foot," when instructing. The tape clashed with the black and pink of the pupils' leotards and matching tights, but it served an important purpose in the School of Missouri Contemporary Ballet's new dance class.

It's one of the ways instructors in the DanceAbility class give children with special needs a better chance to learn. They pick up not only basic ballet technique, but also life skills such as following directions and waiting their turn.

Peeking into a recent dance class, it was easy to see that no two students were the same. Some followed directions easily, singing along to "Head, Shoulders, Knees and Toes" as they stretched to reach their tiny feet. Others preferred to jump across the floor, testing the power of their still-growing legs. Some twirled with ease, while a few needed the guidance of a teacher's hands to find the shape of a ballerina.

The class was the first of its kind at the school. Euker, who is also a professional dancer with the Missouri Contemporary Ballet, led the class through 45 minutes of dance instruction. Physical therapists Jennifer Highbarger and Danielle Schaefer and speech language pathologist Cynthia Kuhn also helped when needed: aligning a leg, holding a hand or guiding a distracted pupil back into the circle, which was not uncommon. Two younger dancers, Kayla Glaser and Stephanie Bonham, also assisted with the class.

"It's really great to have some qualified people who know what these students need," Euker said. "Every student needs individual attention."

Highbarger and the other therapists are used to giving this kind of individualized assistance. But it seems easy for Highbarger, whose face lights up as she talks about the class of 4- to 8-year-olds. Her dedication is apparent as she makes a mental note aloud to find out whether one of her "little friends," as she calls them, has bought her ballet slippers yet, much like a parent would note for their own child.

So it's no surprise that the idea for DanceAbility came about when Highbarger was taking Euker's adult dance lessons at the School of Missouri Contemporary Ballet. As usual, Highbarger was thinking about her students and how they might benefit from an adaptive dance class.

She later discovered one of her former students from Early Childhood Special Education was taking dance at the school. That same week, Highbarger ran into Euker downtown and offered to share some tips on how to better accommodate a student with special needs. Euker was grateful for the tips, and Highbarger found herself asking if she would ever consider starting an adaptive class.

Soon the two were planning DanceAbility, though they weren't sure whether it would work. To minimize these doubts, Highbarger started with a set of kids whose parents she knew through her work with First Steps or the Columbia Public Schools Early Childhood Special Education.

Euker began every class by asking each of the girls and the boy in the class about his or her day. Sometimes, Highbarger chimed in to simplify the question for those students who weren't as vocal.

Next, the stretching song came on, prompting the students: "This is the stretching song/So come on get busy." The kids sat in a straddle position with their tiny, slippered toes touching, reaching toward the circle as they pretended to make a pizza, unaware they were actually warming up their entire bodies.

Euker kept the class exciting, switching from normal ballet skills such as balancing on tiptoes to an enthusiastic rendition of the chicken dance.

The weekly routine — presented as a visual schedule that looked like a storyboard — was posted on a mirror. Euker and the therapists used it to help show the students the order of activities in class. She tried to keep the structure and her explanation of steps consistent to help students remember them from week to week.

That was effective for students like Amelia, who sometimes needed more than verbal instructions. Although her intelligence is in the normal range, she has a white matter brain disorder and global apraxia, which limits her fine and gross motor skills and makes tasks like holding a pencil or blowing a bubble more difficult. So, visual schedules help her understand what's going to happen next.

More than a class

Some kids came in spinning. Others were led in more shyly by their parents. Some saw the studio as a space for running.

But when asked to do so, the students lined up at one end of the studio, patiently waiting to take their turn to march across the floor by themselves — their moment in the spotlight. It wasn't about how straight their legs were or whether their posture was perfect. It was about waiting patiently while standing in line, listening to their teacher, and being confident and independent.

"They're not learning super intricate, difficult dance steps," Euker said. "All those things they learn in school are helpful to learn in another setting as well to make it really click. They learn how to push themselves, so they can do things they didn't think were possible."

It wasn't just the kids who benefited from the class. Their parents found their own sense of belonging at the school as well.

Becky Maltsbarger, Amelia's mom, had been looking for a class where Amelia could be as close to a normal ballet student as possible. She wasn't expecting to see a huge difference after eight weeks of class; she just wanted Amelia to have a place where she could be part of a normal kindergarten activity.

Maltsbarger said it's also good to be around other moms whose children have challenges similar to Amelia's.

"It's kind of a small community, moms with kids with special needs, and it's not always easy to meet another family who's going through the same thing you are," she said. "It's not like you get your diagnosis from your doctor and they're like, 'Here are all are your resources.'"

Parents weren't allowed inside the studio during class time so the kids would stay focused on the instructors. That left the parents with their own, private space in the school's office, speaking a language only they know. The conversation was about Individualized Education Programs, therapy, doctors — subjects unfamiliar to parents who don't have children with special needs.

It's a supportive place, Maltsbarger said, where parents don't have to feel like everyone is staring at their kid.

One day before class, a mom was getting flustered because her child was crying. As Maltsbarger was about to reassure her that it was no big deal, the mom stopped her, saying, "I'm used to being that mom."

But Maltsbarger was determined to keep the environment judgment-free. "I told her, 'No, no, no, please don't feel like that. You may be that mom right now, but I'll be that mom tomorrow. I accept you, I'm trying to support you.'"

Although the first session of DanceAbility wrapped up on March 5, Highbarger hopes there will be many encores.

She has planned one more session, before Euker moves out of the state, that will start in late April. There are also plans for a summer session and two in the fall, all taught by Missouri Contemporary Ballet dancer Caitlin Younker. The fall classes will still accommodate 4- to 8-years-olds, but will also reach out to students nine and older.

Although the class ended two weeks ago, everyone involved is still talking about the progress the first class made.

Highbarger was "blown away" by one little boy who can't walk by himself, but who understood that when she tapped his foot, he was supposed to stretch it out and tap it on the floor. There's another little girl with hemiparesis, or a weakness on one side of the body, who had been struggling in school but was able to follow every instruction given in class by the time it ended.

Highbarger saw small improvements in all the students. For Amelia's mom, it was about her daughter's experience as a whole.

"She has no idea that there's something different about her and she doesn't realize that this is a special needs class," Maltsbarger said. "For her, it's just going to ballet. And I like that."

In "Crushing Perceptions," Missouri Contemporary Ballet dancers wrap themselves in a lengthy piece of green fabric, attend a rowdy wedding and reflect on the meaning of community.