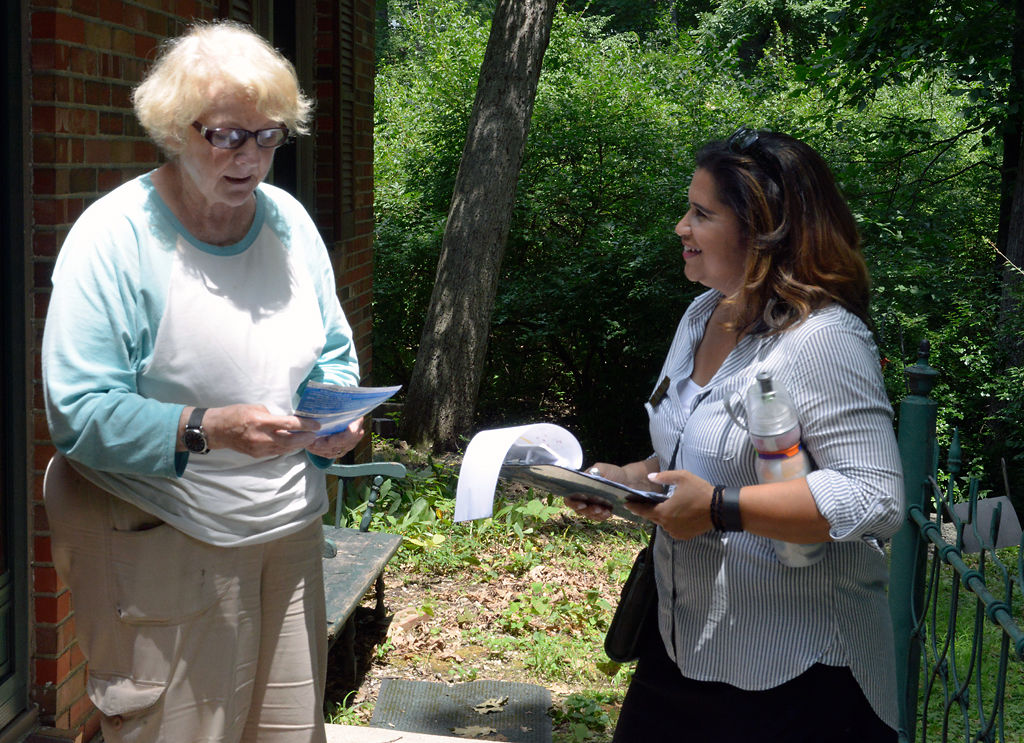 Pauli Landhuis, left, listens to Chimene Schwach on July 18 as she goes door-to-door campaigning for Boone County Public Administrator. Public administrators determine estates of deceased, minors and others not capable of making decisions for themselves. 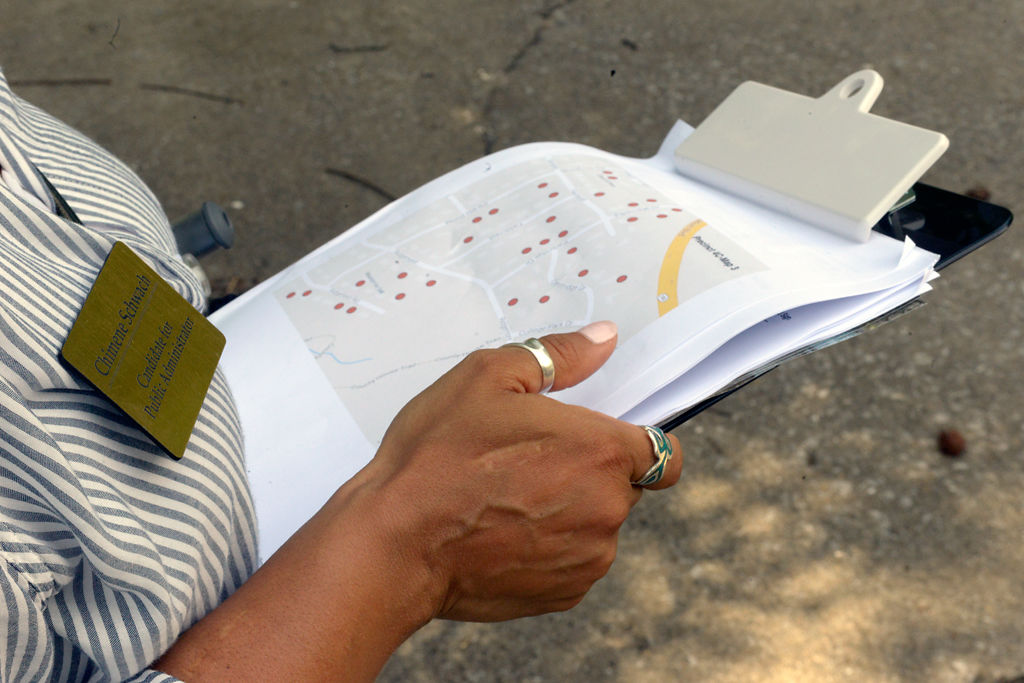 Chimene Schwach campaigns door-to-door in her neighborhood in anticipation of the upcoming Aug. 2 primary. Each dot on her map represents someone who voted as a Democrat in the previous primary, which she accessed from an online database. 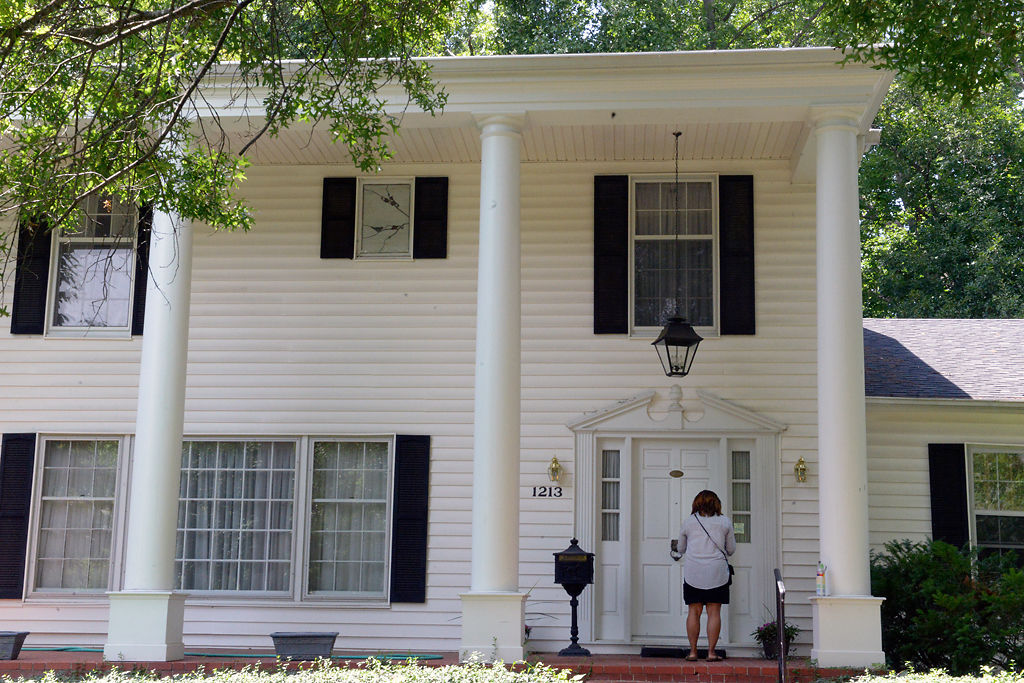 Chimene Schwach knocks on July 18 at a house on her route while campaigning. Schwach has one opponent in the public administrator race, fellow Democrat Sonja Boone.

Pauli Landhuis, left, listens to Chimene Schwach on July 18 as she goes door-to-door campaigning for Boone County Public Administrator. Public administrators determine estates of deceased, minors and others not capable of making decisions for themselves.

Chimene Schwach campaigns door-to-door in her neighborhood in anticipation of the upcoming Aug. 2 primary. Each dot on her map represents someone who voted as a Democrat in the previous primary, which she accessed from an online database.

Chimene Schwach knocks on July 18 at a house on her route while campaigning. Schwach has one opponent in the public administrator race, fellow Democrat Sonja Boone.

COLUMBIA — Chimene Schwach (pron. She-min Shwahk) runs on coffee these days as the Aug. 2 primary nears. For the past few months, she’s been drinking a 16-ounce cup with two espresso shots and whole milk.

Since June, she has been going door-to-door throughout Boone County, letting residents know she’s running for the position of public administrator and what she hopes to accomplish if elected. Schwach, 46, is one of two Democrats seeking the position vacated by Cathy Richards, who is running for 46th District state representative.

Because there are no Republicans running, the race will be decided in the primary.

Last Monday, Schwach knocked on Pauli Landhuis' door in southwest Columbia around 1:30 p.m. Landhuis stepped outside on her patio while two small schnauzers barked and pawed at the glass door from inside.

Landhuis said she didn't know what a public administrator does, so Schwach cheerfully explained while standing in the 95-degree heat.

“Basically, the public administrator is the guardian and conservator for the county and anyone who have been determined legally incapacitated," she said. "Sometimes that's the elderly or children, but it's usually people with physical or mental disabilities."

“Certainly you have a passion for this job,” Landhuis said after listening to her.“You’d be a great asset.”

On a good day, Schwach walks from about 10 a.m. to 7:30 p.m. in Columbia and surrounding towns with a break around lunchtime to eat with her two sons, Zachary, 10, and Jacob, 7.

When she's not talking to voters, Schwach drives the boys to swim practice and track meets. June 30 was Schwach's last day as the director of after-school care at Our Lady of Lourdes Interparish School. She now has the time to attend fundraisers and engage voters.

Schwach said she has been cause-oriented her entire life. When she was 12 years old and living in Kansas City, she became involved with the anti-nuclear movement, for example.

Although this is her first attempt to seek public office, Schwach has previous campaign experience,   volunteering to help other Missouri Democrats, including Sen. Claire McCaskill.

“I see this elected position (public administrator) as a social justice position in our government," she said. "I feel like I can be a voice for those that don’t have one.”

Schwach and her husband, Jim Wright, moved to Columbia in 2009 from Nashville, Tennessee, where she managed an insurance office.Before Nashville, they lived in Kansas City. Most of Wright's family lives in St. Joseph and Kansas City.

Schwach grew up in Kansas City and spent her childhood summers in Springfield, where her family is from, as well as from the Missouri Bootheel . Schwach's mother, Paula, is a lawyer and currently the mayor of Westwood Hills, Kansas.  Paula Schwach was previously the Regional Counsel, U.S. Department of Transportation for Federal Transit Administration, Region VII.

"Chimene has been exposed to local government since 8 years old, coming with me to meetings" Paula Schwach said." She has a unique ability to make people comfortable with her. When she was in her preteens, she attended neighborhood-based strategic planning meetings with me and would make the rounds of the room — she was leading the dialogue."

As a child, Schwach also performed modern dance and ballet. When she was 14, she spent a summer in New York studying dance with the Alvin Ailey American Dance Theater and fell in love with the city.

Schwach graduated in 1994 from what is now Missouri State University with a bachelor's degree in communication science and disorders, which included taking classes and doing clinical hours in audiology, education for deaf and hard-of-hearing students, speech pathology and psychology.

That same year, she started her master's degree in rehabilitation counseling from New York University, which took her two years. She did her final internship at Johnson County Mental Health clinic near Kansas City, and while there, she worked with deaf and hard-of-hearing schizophrenics.

“It was challenging and interesting," she said. "It’s extraordinary when you can connect with someone who is using sign language, talking to voices in their head and talking to you."

After graduating, Schwach became a loan executive at United Way and later worked at the Youth Volunteer Corps of Greater Kansas City.

In 2000, she became a national certified addiction counselor from the Association for Addiction Professionals. To earn that, Schwach completed clinical hours in a psychiatric ward at Dwight D. Eisenhower VA Medical Center Leavenworth, Kansas. At the same time, she also worked for the American Red Cross and led classes about HIV to educate the public about the disease.

Schwach said she believes it’s important for a public administrator to know and understand what treatment methods are used with clients. If elected, she wants to perform in-house training to update the department. She’s previously taught clinical workshops to professionals.

She also said she wants the Public Administrator's office to connect with the Mental Health Advisory Board, created by the current public administrator with representatives from different service agencies in the county. It is meant to keep the office keep up-to-date on the resources available for the wards. Schwach, who is a member on the board, said it hasn't met this year.

Other goals include modernizing the office.

"There is no relational database in place," she said at a July 14 political forum. "There have been no outcome evaluations done by office. How do we know if the clients are receiving the best treatment if we can't even ask the question?"

"With a relational database, we can extrapolate information from multiple documents and put it together,” she said later. “That’s useful for both evaluating treatment and mismanagement. It’s valuable for when we’re advocating for more resources. We need to be able to pull out data to justify what we’re asking for.”

"That's far too many people to manage," she said.

The budget is already set for the next two years, but she talked about plans to lobby for more resources. Schwach said she has talked to current local officials and public administrators around the state about the budget.

She also said she has established relationships with state officials. Medicaid expansion is another way to bring more resources to rural communities, she said.

“While Boone County has fabulous resources — better resources than all of the counties surrounding us in terms of social service agencies and access to them — but those resources are still limited," she said.

“We always must be cognizant that while we are serving marginalized folks in the community; we are also responsible to not only our fellow elected officials but also the public at large for spending dollars wisely.”

The public administrator manages estates for minors, people with disabilities or people who can’t manage their estates on their own. This role also oversees the estate of deceased persons if there is no will, no apparent heir or if family members are unable to agree who should be the primary person for taking care of the estate.

The Boone County Public Administrator is elected for four years and paid more than $90,000 a year. The current public administrator, Cathy Richards, is running for 46th State Representative in the Aug. 2 primary.

The candidates running for the Boone County Public Administrator are Sonja Boone, a Democrat, the chief deputy public administrator, and Chimene Schwach, also a Democrat, who was director of after-school care at Our Lady of Lourdes interparish school.