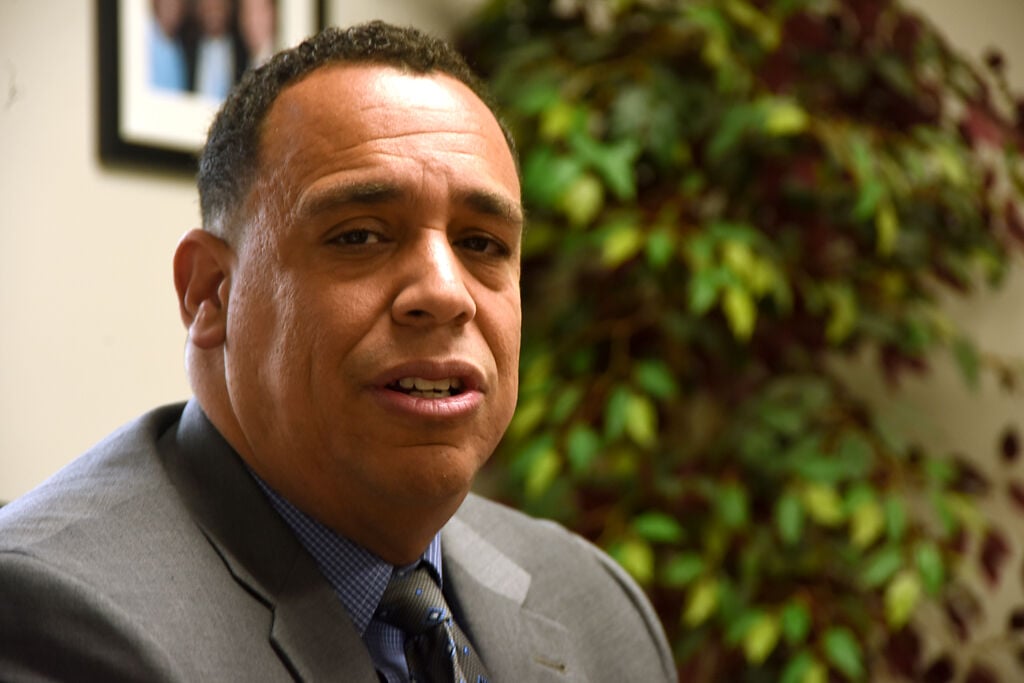 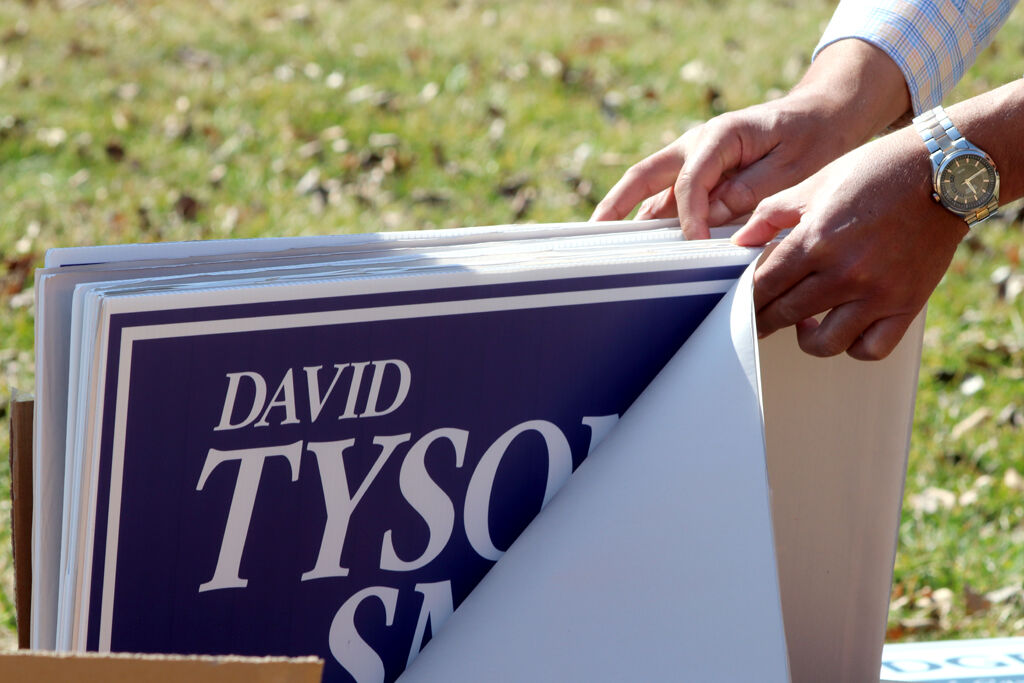 David Tyson Smith looks through the signs March 6 at the Boone County Democratic Party headquarters in Columbia. "I've always loved politics," Smith said. "I've been an attorney lawyer for 15 years and I was doing it in hopes of it leading into politics." 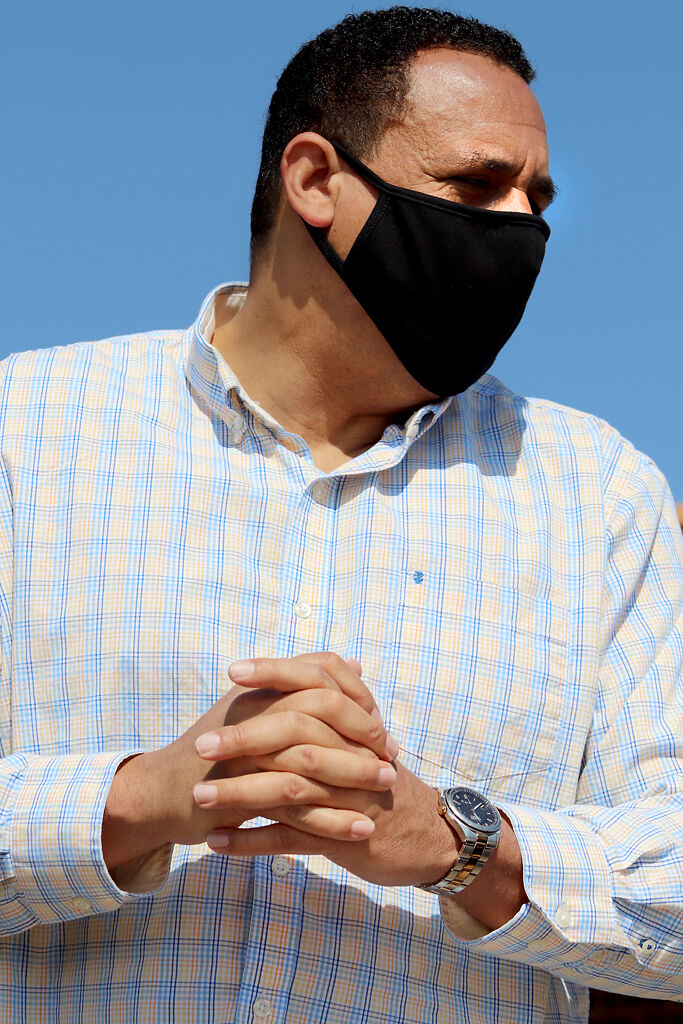 David Tyson Smith talks to the volunteers March 6 at the Boone County Democratic Party headquarters in Columbia. If elected, Smith would be the first Black state representative of the district. 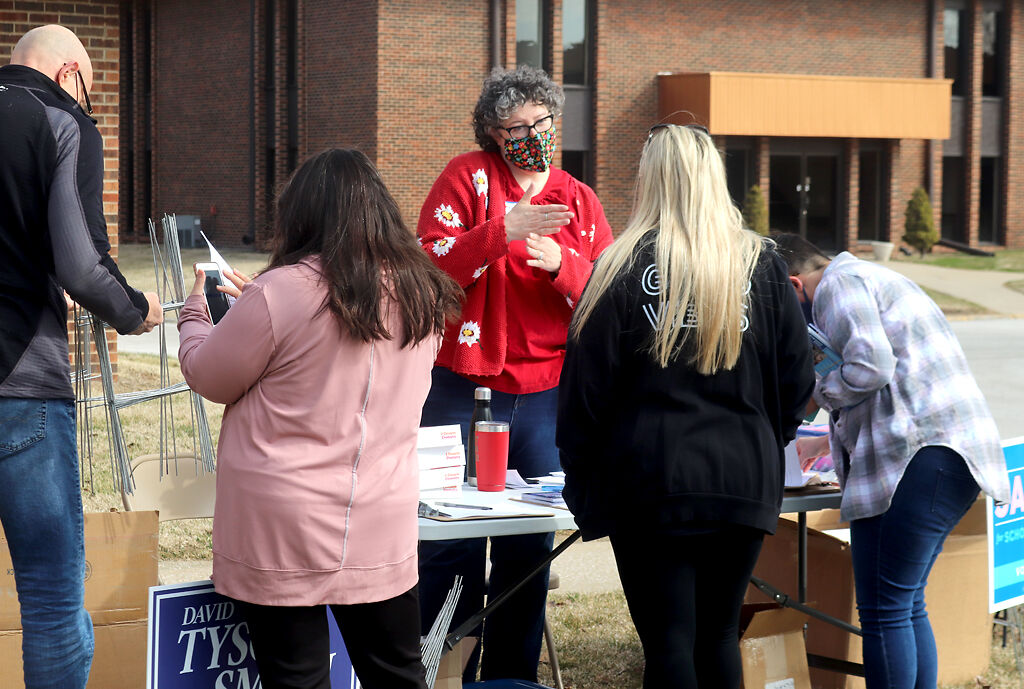 Sarah Catlin talks to the volunteers who are putting up signs March 6 at the Boone County Democratic Party headquarters in Columbia. Catlin works on David Tyson Smith's campaign.

David Tyson Smith looks through the signs March 6 at the Boone County Democratic Party headquarters in Columbia. "I've always loved politics," Smith said. "I've been an attorney lawyer for 15 years and I was doing it in hopes of it leading into politics."

David Tyson Smith talks to the volunteers March 6 at the Boone County Democratic Party headquarters in Columbia. If elected, Smith would be the first Black state representative of the district.

Sarah Catlin talks to the volunteers who are putting up signs March 6 at the Boone County Democratic Party headquarters in Columbia. Catlin works on David Tyson Smith's campaign.

The Louisiana woman had stolen a wallet.

Then, she was facing 20 years in prison.

For David Tyson Smith, her predicament was a stark example of the impact laws can have and the importance of making sure they treat people fairly.

That lesson is one reason Smith is running for Missouri state representative of House District 45, which serves Columbia and Boone County. If elected, he will replace Kip Kendrick. Kendrick served the 45th District from 2015-2021, resigning in January to serve as chief of staff for Sen. Greg Razer, D-Kansas City.

Sticking to his roots

Born and raised in Columbia, Smith attended Tulane Law School after graduating from MU. He worked at a plaintiff’s law firm in New Orleans before returning to Columbia, where he founded local law firm Smith and Parnell LLC with Malia Parnell.

Columbia will always be home for Smith, who said the city is a special place that “has a way of drawing people back.”

To put it simply: “I think people are generally really friendly here,” Smith said. “It’s a great place to raise a family.”

Smith, alongside other local leaders, organized Columbia’s Citizens Police Review Board in 2009. The board independently reviews perceived and actual police misconduct in order to increase accountability and trust between local police and Columbia residents.

“I think he’s had a huge impact on the Columbia community,” Parnell said. “He is someone who truly cares about people and fights for justice.”

Smith said the people of Columbia inspire him to get out of bed every day and stay motivated, even when times are tough.

“Someone came in the other day and dropped off a donation, and they were almost in tears,” Smith said. “And they were saying, ‘I’m so happy you’re doing this.’ Even though we had masks on, they wanted to give me a hug.”

Smith explained that it can feel easy to give up sometimes but seeing the impact his work has on people makes a big difference.

“When you realize that kind of, outside this bubble you’re surrounded in, it’s actually affecting people,” Smith said, “That motivates me, right? So that’s what it’s all about.”

“I worked during the summers, and I think just to me, the biggest part of school wasn’t so much the work,” Smith said. “It was, you know, finances and making sure you have enough money to pay the bills and to keep it going and to survive.”

When he was in high school, Smith’s mother would buy what he needed. But if Smith wanted something like designer clothes, that was his own responsibility.

“I didn’t like that, but as a teenager I did that — during the summers, I worked full time, and I paid for a lot of those things myself, like the designer clothes that I wanted,” Smith said. “So that was difficult, but I think it helped shape my character, as well.”

Years in the making

Kendrick said he was not surprised when Smith announced his candidacy.

“He’s been involved in a number of different issues in Columbia and has been an engaged citizen for a number of years,” Kendrick said. “(I) always (knew) in the back of my mind that he would make a strong candidate, and I assumed that he was probably thinking about it at some point.”

In fact, Smith has planned to go into politics for years.

“I wanted to go to law school to learn the law, to help me with a potential career in politics,” Smith said, “So, that was always kind of down the road for me, when the opportunity was right.”

Smith said his time in law school showed him the power of advocacy and the effects laws can have on people’s lives.

He remembers the case he witnessed in Louisiana, while he was in law school. He described the state’s laws as “draconian” or “three strikes, you’re out.” The case involved a woman who had stolen someone’s purse. She felt bad, so she returned it but then was tempted to steal the wallet.

The woman was caught stealing the wallet, which was her third criminal offense. Therefore, she was facing roughly 20 years in jail.

“She didn’t need 20 years in prison for that stupid thing,” he said, “for just that little silly exchange.”

But in Louisiana, stealing a purse was considered a violent offense. Smith thought the woman was doomed, until his supervisor, who was overseeing the case, brought up that the woman had stolen a wallet, not a purse — and not violently.

The woman served under two years in prison, instead of 20.

“I think seeing that an as an attorney, and seeing how these laws coming down can really have an impact, was one of the reasons I wanted to serve politically.”

Smith said that when he found out, he was surprised.

“There’s always a little bit of a burden with things like that,” Smith said. “But I think that just kind of goes along with running for office in general, there’s a little bit of pressure you feel.”

Smith said he’s excited for the opportunity to enact change.

“I think it’s gonna be interesting because it could shift the balance of power in Jefferson City, too, because a lot of the people of color in the legislative Black Caucus come out of St. Louis and Kansas City,” Smith said. “So to have someone from Columbia, I think it’d be good.”

Smith said his first priority in office will be the COVID-19 pandemic. He plans to continue to work on local vaccine distribution and ensure that anyone who wants to be vaccinated, can be.

The 45th District is a diverse one, and Kendrick said Smith’s potential election will have an impact on the area.

“David is so much more than just the color of his skin, clearly, but it is important all the same,” Kendrick said.

“It’s long overdue that we’ve had a person of color represent this area,” Kendrick said. “And, you know, truly, I couldn’t think of a better person (for) that role than David.”

Voters Guide: Meet the candidates and understand the issues for the April 6 election

The Second and Sixth Ward seats are up for election as well as two Columbia School Board seats and a special election for Missouri House District 45.