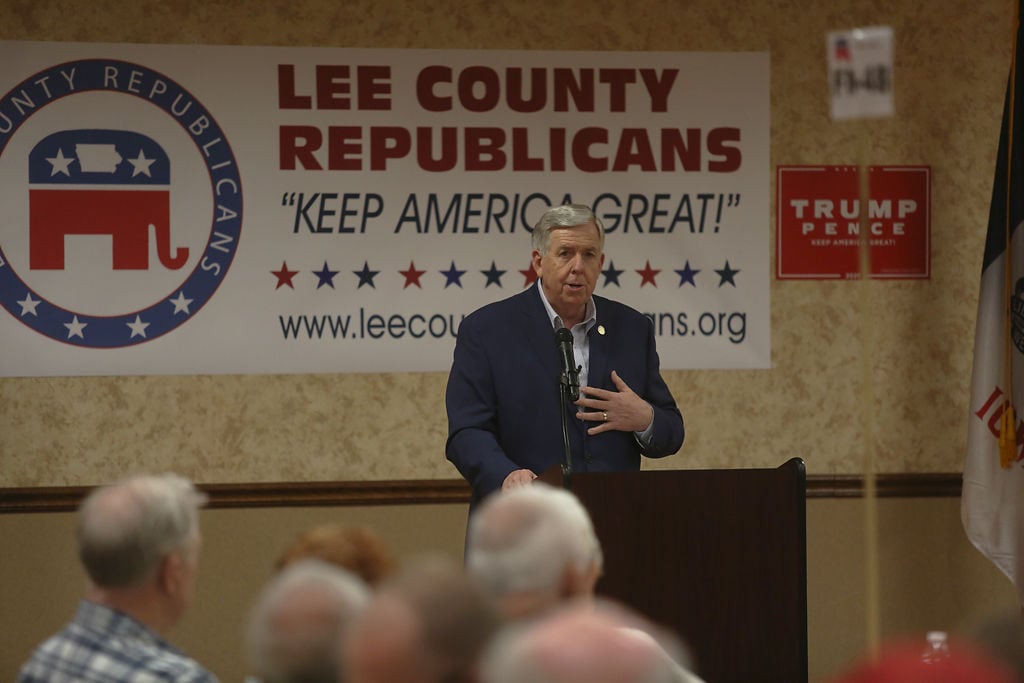 Missouri Governor Mike Parson speaks to voters gathered at the Lee County Republican caucus on Monday at a Quality Inn and Suites in Fort Madison, Iowa. Parson quoted President Donald Trump in his speech saying, “America will never, ever, be a socialist country.” 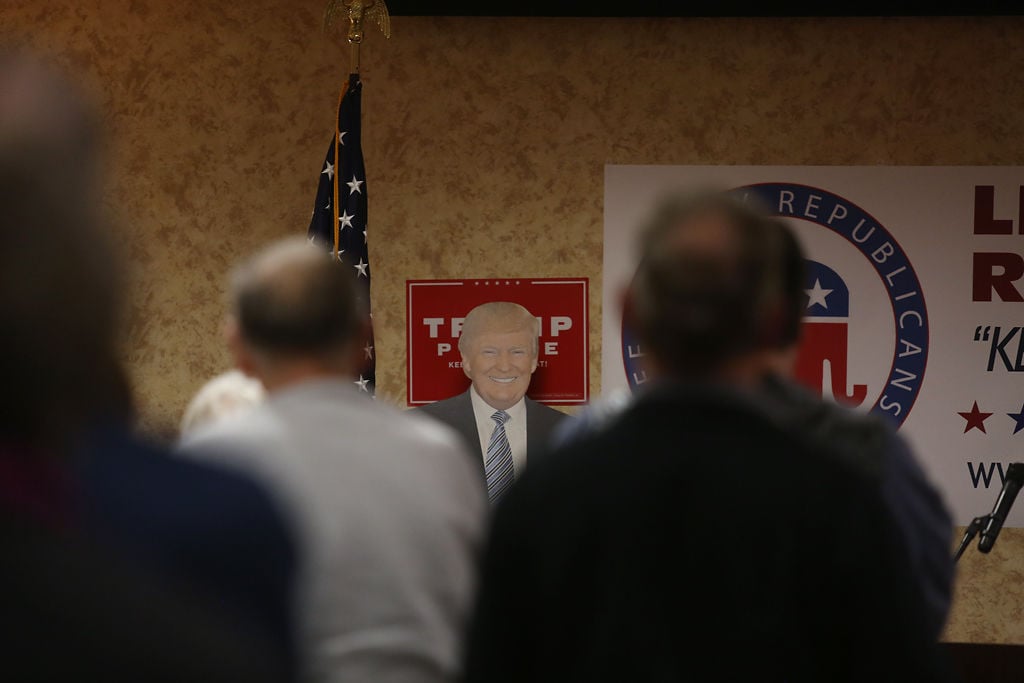 People attending the Lee County Republican caucus on Monday at a Quality Inn and Suites in Fort Madison, Iowa, wait for Missouri Gov. Mike Parson. A cardboard cutout of President Donald Trump was placed next to where the governor stood to accept the nomination for the president. 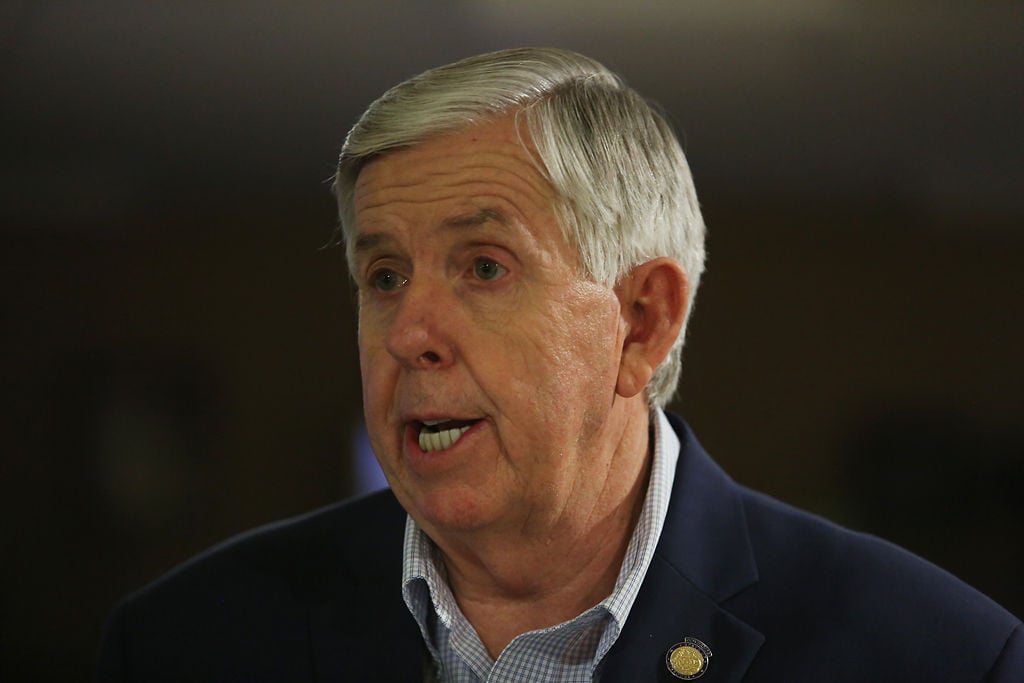 Missouri Governor Mike Parson speaks to voters gathered at the Lee County Republican caucus on Monday at a Quality Inn and Suites in Fort Madison, Iowa. Parson quoted President Donald Trump in his speech saying, “America will never, ever, be a socialist country.”

People attending the Lee County Republican caucus on Monday at a Quality Inn and Suites in Fort Madison, Iowa, wait for Missouri Gov. Mike Parson. A cardboard cutout of President Donald Trump was placed next to where the governor stood to accept the nomination for the president.

FORT MADISON, Iowa — On Monday night, the Republicans of Lee County and Gov. Mike Parson filled the ballroom of the local Quality Inn and Suites for an evening Iowa has been waiting on for months.

In the southeast corner of the state, an older crowd filed in to listen to Parson speak on behalf of President Donald Trump and make his inevitable victory in the Republican Iowa Caucus official.

The governor was introduced by the chair of the Lee County Republican Party, Martin Graber, who both predicted Trump would win reelection with greater numbers than Reagan’s, and added an “s” to the end of the governor’s name that does not exist.

A few miles down the road at Richardson Elementary, an entirely different, far more chaotic scene was taking place. In the school’s gymnasium, tables lined walls below sheets of paper with the last names of candidates written in large print. Some of the tables, such as those for Steyer, Bloomberg, and Bennet, were conspicuously unoccupied. A cardboard cutout of Biden sat beside his table.

The Republican caucus had been orderly, one person speaking at a time. But the gymnasium was filled with a persistent dull roar as caucus-goers tried to win each other over. After the first vote, where 91 ballots were submitted, only three candidates crossed the 15% threshold of viability to remain alive for the second vote, while everyone else became a free agent who could join a viable campaign.

After one vote, only Joe Biden, Pete Buttigieg and Bernie Sanders were still in the running to claim the 12 delegates. Elizabeth Warren had only four supporters in attendance, and their snacks and iced tea were not enough to woo anyone.

At this point the room became chaotic, with all three candidates’ supporters vying to win over those untethered from a campaign. Nearly all of Andrew Yang’s 10 supporters joined the Sanders camp. Warren’s split up to join Buttigieg or Sanders.

Warren’s precinct captain, Mary Townes, took longer than anyone to commit, before finally committing to Sanders. She had been volunteering with Warren’s campaign and seemed dejected. Remaining seated behind the Warren table as others committed their now free allegiance to others, she reflected on what had gone wrong.

When asked where she thought she’d end up throwing her support, she said, “next door, where I was the last time,” referencing the nearby Sanders contingent.

A scene broke out in the Buttigieg camp when his supporters put stickers with his name on the ballot, to aid in spelling. The Democratic Party only allowed stickers that had been given out by the precinct captain running this caucus to appear on the ballots.

There was much debate and after being on hold with the Democratic party for half an hour, it became clear the Buttigieg contingent would need to make a decision. They could either turn in their ballots with the stickers, risking a complaint that would invalidate their votes. Or, they could take new ballots but lose votes, as some had already left after committing to team Pete.

The official running the caucus at Richardson Elementary was shouting for order before finally obtaining all the votes, with Buttigieg’s group opting to turn in their original ballots with the stickers.

While Biden’s camp was significantly ahead of Sanders’ in the first count, Sanders ended up beating him out. In the end Buttigieg took five delegates, Sanders took four, and Biden three.

Townes summed up the evening and her disappointment.

Residents of Fort Madison, Iowa, a town of just over 10,000, prepare for debate Monday evening as the party caucuses arrive.