Three incumbent Republican House members running for reelection have all outraised and outspent their Democratic opponents, according to state campaign finance records.

The Missourian looked at campaign finance filings for each candidate, breaking down their fundraising and spending totals, and spoke to people who’ve donated to their campaigns to find out why they’ve thrown their support to these candidates.

Reisch’s campaign has raised a total of $64,205 this election, $13,305 of that from the most recent reporting period required by the Missouri Ethics Commission.

She reported a total of 84 donations, with the biggest contribution from a committee, Mighty Missouri PAC, from St Louis, which donated $2,000. However, 34 donations were less than a hundred dollars, most of them from individuals.

“I’ve known Cheri for a number of years,” said Columbia resident John Martin, who donated $250 to Reisch’s campaign this September. “She is a very hardworking person who really cares about her constituents.”

Martin said he contributed to Reisch’s campaign because he agrees with her values as a Republican candidate.

“She wants to lower taxes, strong police, you know, efforts on funding the police. She’s also very pro-life. I’m a very pro-life person, so her votes from pro-life causes are very important as well.”

Her campaign reported a total of $23,397 in contributions for the election, $5,144 of that being received in this quarterly period. 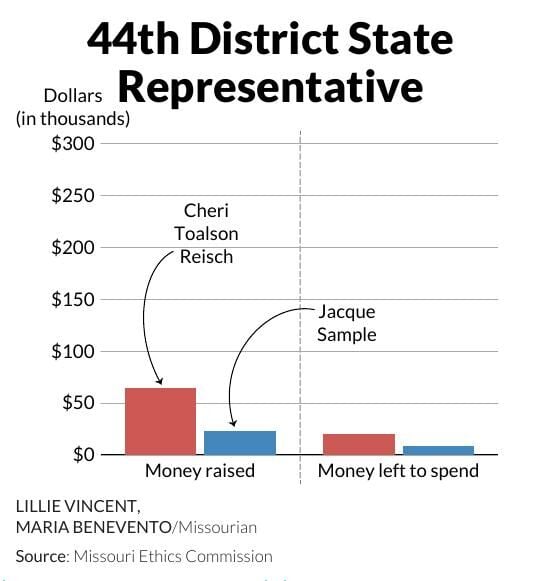 “We’re really powered by small-dollar donations. And that’s been very helpful, to have a lot of widespread support from many people who can give small amounts,” said Elisabeth Condon, treasurer for Sample’s committee.

Condon said that the candidate’s campaign adjusted its goals in terms of fundraising because of COVID-19 but they are feeling good about the response.

Sample was also endorsed by Carpenters Help In the Political Process, a political committee that donated $2,046 — the limit for a state representative — to her campaign this September.

“We are an organization that contributes to candidates that we feel best represent the working Missourian in each district in the House,” said Mark Dalton, political director for the St Louis-Kansas City Carpenters Regional Council.

Plank raised around $12,000 in the most recent reporting period — pouring a little more than two-thirds of the gains into print services and a slew of Facebook advertisements as the campaign makes a final push before the general election. Plank’s biggest contribution came from a labor union representing carpenters like himself, according to the October quarterly report.

Carpenters Help In The Political Process, or CHIPP, gave $2,046 to Plank’s campaign because it’s “frankly, something that’s easy for us to support,” said Dalton. 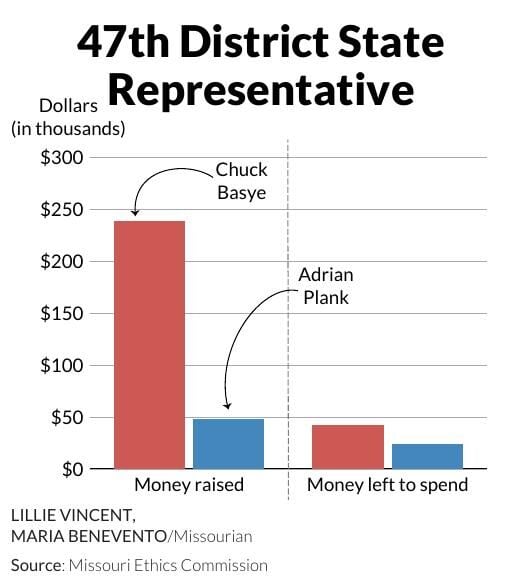 Dalton pointed to Basye’s past support of right-to-work legislation in Missouri as a key area of disagreement.

Despite the cash advantage, Basye’s campaign took a more conservative approach to its spending during the quarter, allocating around $800 to print services and event reservations. The campaign managed to bring in as much as Plank’s campaign dished out.

Sam Licklider, a lobbyist with Missouri Realtors, said their political action committee contributed to Basye’s campaign because Basye has been “willing to listen but not always agree.”

Licklider praised Basye’s efforts in writing legislation for a bill on special taxing district legislation earlier this year, adding that the 47th House representative was “instrumental in trying to get good things done for both property managers and renters.” The legislation was killed by governor’s veto.

“The only thing we look for in a person we want to support is an open mind and a willingness to think,” he said, “and Basye exhibits both of those.”

Jay Atkins, an attorney in government affairs with a background in law and politics, contributed $100 to Walsh’s campaign and said he supports her legislative efforts to strengthen in-home day cares and create safer environments for children.

Atkins said these efforts include “making sure that parents have options or places to take their kids often within their extended family or their network of friends or neighbors. She wants to make sure those options are available rather than forcing parents to go to larger, more corporate-type environments..”

Atkins also said he contributed to Walsh’s campaign because he believes she is genuine with her constituents.

“I don’t financially support every candidate that I might vote for,” Atkins said. “I did choose to contribute to Sara because I just genuinely think she cares about people. So that’s a sort of refreshing characteristic in the era of politics that we’re in right now.” 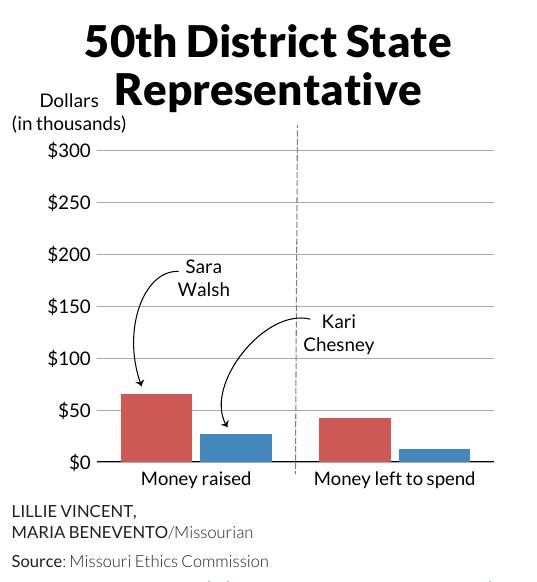 Christopher Pieper, an attorney at Blitz, Bardgett & Deutsch, contributed a total of $250 to Chesney’s campaign and said he supports her policies on public education and safety, health care, defending workers’ rights and reinstating local control in Missouri’s agriculture industry to help prevent the abuses of corporate agriculture.

Pieper said Chesney’s policies will benefit Missouri, as opposed to prior legislation that he believes has hurt the state, including corporate tax giveaways and cutting down the budget for public education.

“Kari supports Medicaid expansion, which was overwhelmingly supported by Missourians,” Pieper said. “She supports protections for preexisting conditions and really, the biggest thing is, she supports working people.”

The Missourian reviewed campaign finances from the Oct. 15 quarterly reports for local candidates.