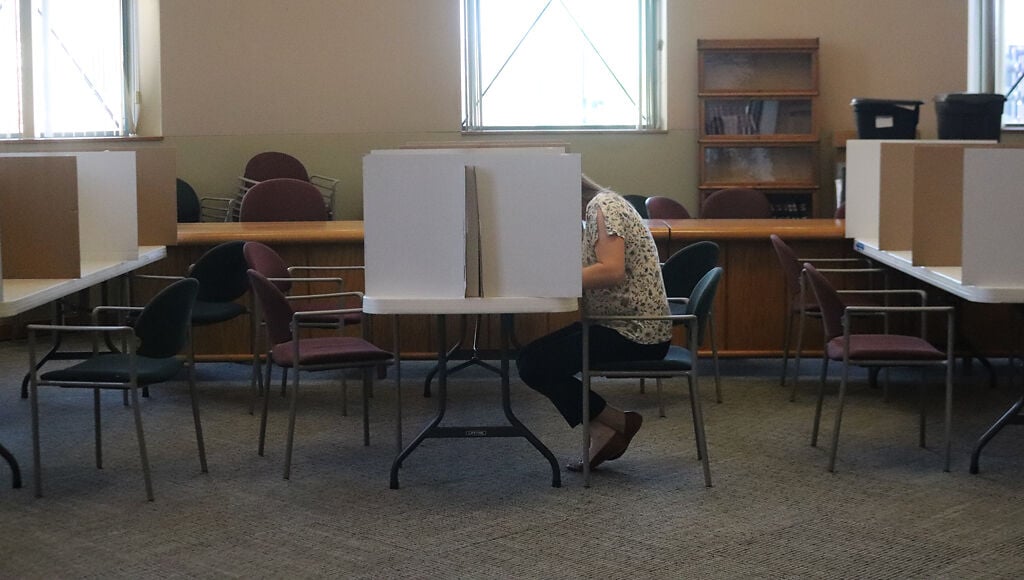 Nicki Rinehart fills out her ballot Tuesday at the Boone County Government Center in Columbia. Lines were short during early morning voting hours. 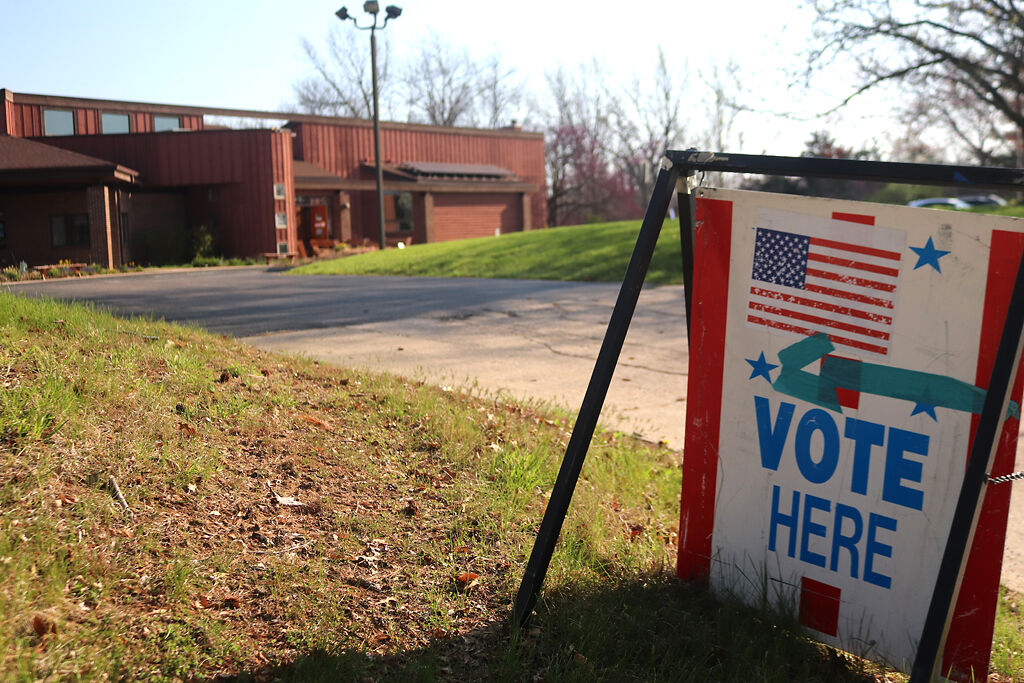 The Unitarian Universalist Church was among the Sixth Ward polling places open to voters Tuesday. It is the municipal general election with School Board and City Council seats, bond issues and a state representative race on the ballot. 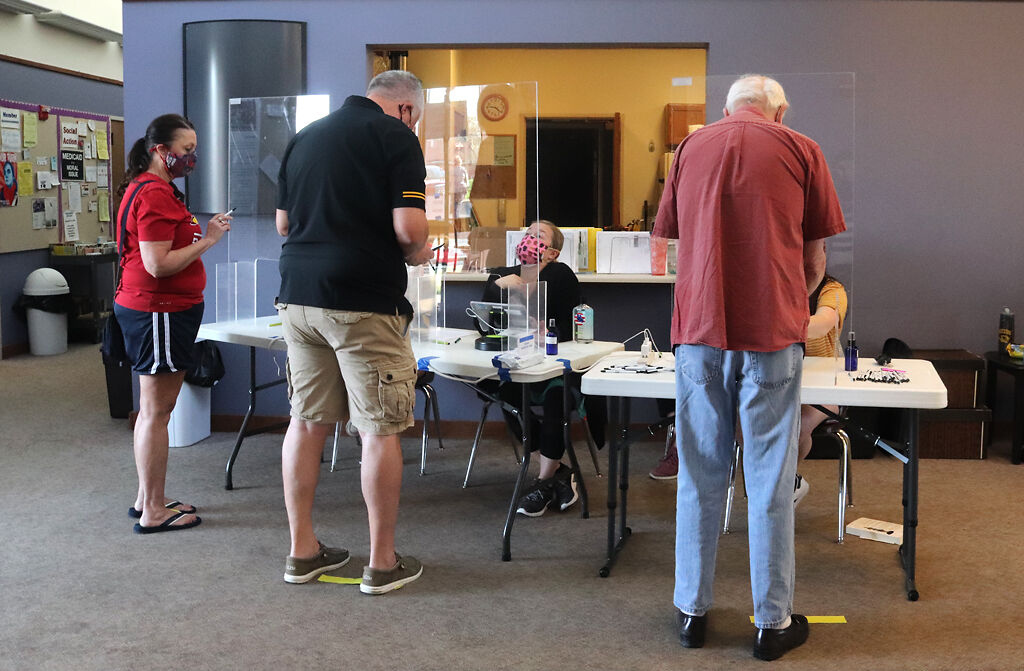 Voters check in at their polling place Tuesday at the Unitarian Universalist Church in Columbia.

Nicki Rinehart fills out her ballot Tuesday at the Boone County Government Center in Columbia. Lines were short during early morning voting hours.

The Unitarian Universalist Church was among the Sixth Ward polling places open to voters Tuesday. It is the municipal general election with School Board and City Council seats, bond issues and a state representative race on the ballot.

Voters check in at their polling place Tuesday at the Unitarian Universalist Church in Columbia.

Voters across Columbia and Boone County were heading to the polls Tuesday to choose representatives for school boards, city councils and town boards.

In Columbia, voters in the Second and Sixth wards were casting ballots for City Council seats.

In the Second Ward, Bill Weitkemper, Jim Meyer and Andrea Waner are competing to replace Mike Trapp, who chose not to seek election to a fourth three-year term.

In the Sixth Ward, incumbent Betsy Peters is seeking a third term and faces challenges from Randy Minchew and Philip Merriman.

There are five people seeking one of two three-year terms on the Columbia School Board. They are incumbent Teresa Maledy and newcomers Luke Neal, Aron Saylor, Katherine Sasser and Jeanne Snodgrass.

A special election to replace Kip Kendrick as 45th District state representative is also on the ballot. The candidates are Democrat David Tyson Smith and Libertarian Glenn Nielsen.

The Boone County Fire Protection District is seeking voter approval of a $6 million bond issue that would pay for new firefighting equipment, upgrades to fire stations and land and architectural designs for two replacement stations.

The Missourian sent reporters to several polling places Tuesday morning to see what voters had to say about the election. Turnout appeared to be light but steady. Boone County Clerk Brianna Lennon said in a tweet that 7% of registered voters had cast ballots as of 1 p.m. That includes those who cast absentee ballots.

Here's what voters who spoke with the Missourian had to say.

"We just got through the general election, so I know it's not a big election, and I know it's cliché, but it's the one thing we get to do that's uniquely American. What we can do at home is what makes the difference."

"We need fire protection and good people on the School Board."

"I came out to vote because our City Council needs some changes and new blood. I came out to support Randy Minchew because he has good ideas and no agenda."

"The most important issue is the City Council because I don't like their decisions. I'm not a person big on wearing masks, and they kept the mask mandate too long. And I'm here about the roll carts. I lived in Florida, and we had roll carts, and they worked just fine."

"I wanted to come vote for the School Board. I have young nieces and nephews that will be in school soon. So, when you vote, it's for three years."

"We need a change. I just think the current City Council works for their own interests instead of the interest of the people, especially in the Sixth Ward."

"I'm here for rational governance. I want to see the money used for the essentials."

"My kids are grown, but the School Board is still the most important issue in my mind. Education is going to cure a lot."

"I'm voting for City Council. I'm a really good friend of Randy Minchew. He's good with business and a great guy. I know he'll do a good job."

"The School Board is the big issue for me. I have five boys, and having them return to school was a big issue for us. I don't approve of what they've done having school virtual, and it's increased the depression rate in our teenagers, and this whole virtual year has hurt them academically. So I made sure to vote for people that wanted to get them back in school."

"I just like to be a participant in local government. It's important to stay informed in School Board elections. I have two kids, so especially in this time of change and with COVID, it's important to have a diverse board that represents a lot of different viewpoints."

"I'm here to vote for our city councilperson. It's time for a change. One of the candidates is more aligned with my beliefs.... It's a small election, but the more local the election, the more important it is because it has the most direct impact."

"I just want to make sure things stay the same with the change with Peter Stiepleman. I hope that the things he's instituted stay in effect. He was an amazing superintendent."

"I just wanted to vote for Jim Meyer."

"I thought Andrea Waner would make the best choices for our district. She just seems the most energetic."

"I think that getting a new representative who is going to represent the people is important. I also want to make sure we get the right people in the School Board who are going to do good things for the school system. The big-button issue now is virtual learning. There's things that can be done to make sure the school system is better for today's world."

"For me, it was School Board elections and their opinions on roll carts. I'm from Wichita, Kansas, a city much bigger than here, and they had roll carts. They had a trash system that was a thousand times better. I agreed with Bill Weitkemper's stance on this issue."

"We need a new councilperson for Ward 2 who cares about environmental issues, for one, and we've got to continue to deal with this virus, however we do it. At the present, Columbia has a progressive City Council. I've gone before them with issues and gotten a good outcome. I just hope they do more for the environment."

"I think the city needs to be more concerned about growth on the north side of I-70. It's growing rapidly, and the City Council seems like they don't really care about it."

"It's my responsibility as a citizen. I always vote if I can. I actually had COVID last time, and they brought me my ballot."

"I vote every election. I was doing it mail-in during COVID. I think that's the least I can do. I think the candidate I voted for would be a good help for the situation we have now, with COVID and the response. We're in a really bad mess right now."

"I'm all about exerting my right to vote.... I think it's more important now than ever that we support democracy, and our biggest privilege is to vote, so yeah. Even in local elections."

"I think we have got an opportunity to make some real change in Columbia. I think this town has been run by one particular party for a long time, and we have got some candidates on the other side that are pretty interesting."

"Well, I think your vote is more potent in local elections than in national elections because fewer people vote. So, every vote counts that much more. I think that local politics has a much bigger impact on our lives than a lot of other things that people get excited about politically. I think it is important to support our local elected officials and get out and vote."

"I am brand new to the area, so I wanted to come out and figure out how to vote in Missouri."

"It is important, you know? We are getting a new person in our ward, and then School Board is important too."

"Voting is a right and a privilege... I don't want to miss an election!"

"I think it’s important to participate in community elections. I wanted to come out and support the School Board."

"I am a believer in the democratic process, and I believe everyone should have a voice."

"We just believe in educators, so we just looked up the candidate who we wanted to lead the school. We have a daughter moving back with a kindergartner, and they’ll be in the school, so it makes a big difference."

Voters Guide: Meet the candidates and understand the issues for the April 6 election

The Second and Sixth Ward seats are up for election as well as two Columbia School Board seats and a special election for Missouri House District 45.