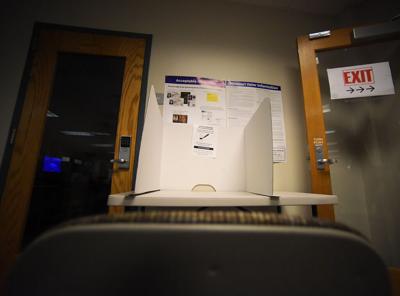 Here's the information you need to know to make sure you know when, where and how to vote in the upcoming Nov. 3 election.

Absentee voting and a new mail-in option are available for voters. Absentee and mail-in ballots must be requested by Oct. 21. Read more about your voting options.

Polls will be open from 6 a.m. to 7 p.m. Tuesday Nov. 3. For information on your polling place and sample ballot, go to the Boone County Clerk's website.

There are three options for presenting identification at the polls. Here is the information from The Boone County Clerk's office about identification needed.

Below, we've compiled a list of stories on the candidates in each race on the ballot to help you make informed decisions.

Parson, 65, was elected lieutenant governor in 2016. He became governor in 2018 when Eric Greitens resigned. Parson says he is committed to funding K-12 and higher education as fully as possible, which is why he has opposed Medicaid expansion. Throughout the COVID-19 pandemic, he has advocated for local control, decline to impose statewide mandates such as a mask requirement.

Galloway, 38, is the incumbent state auditor and served as Boone County treasurer from 2011 to 2015. Galloway has run a campaign focused on government accountability and transparency. She promises to restore health care and implement Medicaid expansion, invest in education and implement a number of economic and public health measures to curb the spread of COVID-19.

Combs believes in limited government and lower taxes. He is pro-life and pro-guns. He believes that Missouri and the U.S. have been controlled by special interests, machine politics and establishment insiders for too long.

Bauer advocates for universal health care, disability rights and public transportation. He is an advocate for racial equality.

Kehoe, 58, is the incumbent for the race and was appointed by Parson in June 2018. Kehoe previously served on the Missouri Senate as the assistant majority floor leader for two years and the majority floor leader for three years. Kehoe's priorities as lieutenant governor include advocating for the rights of both seniors and veterans, expanding Missouri businesses and jobs by decreasing regulations and worked to bring tourists to Missouri through his role on the Tourism Commission.

Slantz, 62, is the Libertarian party candidate and owns W.G. Slantz Company., which provides consulting services for music venues and performers. He believes in a limited and small government and he advocates for open borders and privatizing Medicaid and Medicare, if necessary.

Dragoo, 31, the Green Party candidate, is a past treasurer, spokesperson and co-coordinator of the Kansas City Green Party chapter. She plans to focus on Medicare for all, labor rights and public transportation as lieutenant governor.

Ashcroft, 47, is the Republican incumbent Missouri Secretary of State. He was elected as secretary of state in 2016. Ashcroft says he wants to reduce regulations and state fees so businesses are in the best position to thrive. He also has been a strong advocate for voter identification requirements in Missouri, but says he wants to ensure nothing hinders every eligible voter from casting a ballot. If reelected, he wants to focus on ensuring elections are secure; preventing voter fraud and fair language on ballot measures.

Yinka Faleti, 44, is the Democratic Party candidate for Secretary of State. He is a veteran of the U.S. Army and former state prosecutor. Faleti advocates for automatic voter registration, no-excuse absentee and mail-in voting, risk-limiting audits of election returns and allowing voters to cast provisional ballots at any precinct within an eligible election jurisdiction.

Carl Herman Freese, 61, of Foristell, could not be reached for comment, but according to Project VoteSmart, he is a board member and membership director with The Living History Co., 2009-present; board member of Freese Farms, 1990-present and ran for 23rd District Missouri state representative in 2018.

Paul Lehmann, 70, of the Green Party, believes voting is a fundamental right and responsibility of all citizens and should not be subject to political influences that create obstacles to people voting. If elected, he wants to implement a plan to ensure every citizen is registered to vote at 18.

Paul Venable, 66, of the Constitution Party, was a candidate for Idaho lieutenant governor in 2010 and for the Idaho House of Representatives in 2008, according to Project VoteSmart. He says on his Facebook Page he believes in the power of spiritual belief.

Fitzpatrick was appointed state treasurer by Parson in January 2019, after Eric Schmitt was appointed attorney general. Before becoming treasurer, Fitzpatrick served in the Missouri House of Representatives as the chair of the House Budget Committee. His priorities include preserving the state's financial health, increasing financial literacy and promoting entrepreneurship and job creation.

Englund is a small business owner from the St. Louis area. Englund served as a member of the Missouri House of Representatives from 2008-2010 and 2012-2014, and as the treasurer of the Lindbergh Schools Board of Education from 2014-2017. Her campaign website lists 100 steps to "Get Missouri's Economy Back on Track", including themes like financial equity, support for small businesses and access to health care.

Kasoff plans to streamline processes of the treasurer’s office by using technology, make the office as environmentally responsible as possible and end “gimmicks” such as the 529 college savings plan.

Civettini could not be reached for comment. The Green Party describes its members as feminists and anti-racists who are proponents of gender equality and gender diversity and opponents of capitalism, according to its website.

Schmitt served as state treasurer until being appointed by Parson as the attorney general in January 2019. Prior to entering public service, Schmitt was a private attorney for over 16 years. His priorities include testing sexual assault kits, taking on tech and pharmaceutical companies and fighting human trafficking.

Finneran worked as a federal prosecutor under the U.S. Attorney's office in St. Louis from 2010 to 2017. Finneran earned a law degree from Washington University School of Law. His priorities include prosecution of criminals, advocating for victims of crime and fighting public corruption.

Hartzler is the incumbent who has held the seat since being elected in 2010. During her time in Congress, Hartzler has focused heavily on veterans issues and has served as a member of the House Armed Service Committee. Prior to being elected, Hartzler was a school teacher and member of the Missouri House of Representatives.

Simmons “has advocated on behalf of domestic violence survivors, conservation groups, veterans and helped flood and hurricane victims secure FEMA benefits,” according to her campaign website.

Koonse also wants to make Congress more accountable for the money it appropriates. He said during the COVID-19 pandemic, for example, Congress has scattered money all over the place in an effort to compensate for high unemployment.

Rowden is the incumbent and currently serves as the Senate Majority Floor Leader. Prior to being elected to the state senate in 2016, Rowden served two terms in the Missouri House of Representatives. His priorities if reelected include rebuilding the economy, learning from COVID and investing in higher education.

Baker was member of the Missouri House of Representatives from 2005-2009 and former Region VII Director for the U.S. Department of Health and Human services. If elected, her priorities would include criminal justice reform, protecting medicaid expansion and economic recovery.

Reisch is the incumbent and was first elected in 2016. She is a legal assistant and business owner and former mayor of Hallsville. She considers COVID-19, education — K-12 and higher education — and infrastructure to be the most crucial issues.

Sample is an occupational therapist and adjunct professor. She supports Internet sales tax. She considers recovery from COVID-19, rural broadband and education to be the most critical issues.

Basye is the incumbent and was first elected in 2014. He supports school choice, reduced regulations that impede small businesses and farmers, and providing additional funding to address violent crime.

Plank is a union carpenter and has been a committee member for the Boone County Democratic Central Committee. Plank supports taxing online purchases and advocates for mask mandates and other measures to curb the spread of COVID-19.

Walsh is the incumbent, having served in the position since 2017. Walsh's priorities include addressing the state's COVID-19 policies, funding public safety and determining how to pay for Medicaid expansion.

Chesney said she hopes to serve the people of Missouri with policies that include funding public education, reinstating local control in Missouri’s agriculture industry and improving health care. Chesney is a veterinarian with a background in health care. She said one of the main reasons she is running for state representative of the 50th District is to build up Missouri’s public health ranking, which is among the lowest in the nation.

The state legislature candidates answered a series of questions about their views and priorities if elected. Find them all here.

Devine, 39, is former associate circuit judge for Division XI. Principal attorney at Rogers, Ehrhardt, Weber & Howard LLC in Columbia from 2015–18; attorney at Husch Blackwell LLP in St. Louis and at Ford, Parshall & Baker LLC in Columbia before that.

Hirth, 47, is former clerk for Senior U.S. District Judge Nanette K. Laughrey, former associate at Jenner & Block LLP in Chicago, worked in the Litigation Division of the Missouri attorney general’s office under Chris Koster and was promoted to deputy general counsel in 2011, served as Koster’s official speechwriter and taught constitutional law at MU. In 2017, he formed the civil rights law firm TGH Litigation.

Parry is the incumbent Southern District commissioner. He is a past chair of the Boone Hospital Center Board of Trustees. His priorities include a developing a new master plan, establishing rental housing standards, program to improve the county's roads.

Aldred lives in Ashland is an officer in the Missouri National Guard. He is concerned about environmental issues and believes Boone County should be a leader in addressing "the ravages of climate change."

Democrat Janet Thompson is the incumbent seeking a third term. She worked as a public defender for 25 years. She wants to build on progress made toward diverting people from the criminal justice system and reducing crime recidivism.

Republican Tristan Asbury is director of strategic communication for the Missouri Association of REALTORS. His priority is directing county resources toward economic development and critical infrastructure to boost living standards and make the county attractive for jobs.

The county commission candidates responded to questions about their priorities. Find them all here.

Carey, 53, was elected sheriff in 2004 and took office in 2005. He is an adjunct instructor for Columbia College teaching Introduction to Criminal Justice Administration. Carey began working at the Boone County Sheriff’s Department in 1989 and rose through the ranks of enforcement corporal, sergeant, lieutenant and captain.

This amendment would impose a two-term limit for Lieutenant Governor, State Auditor, Secretary of State and Attorney General. There currently is no term limit on these positions.

Amendment 3 would change the redistricting process, moving it from the nonpartisan state demographer position created under the passage of Clean Missouri in 2018 to a governor-appointed bipartisan commission. The amendment would also ban all gifts from lobbyist, which are currently capped at a value of $5, and reduce state senate race campaign contribution limits by $100, from $2,500 $2,400.

The Nov. 3 ballot includes a three-way race for the 4th District seat in Congress.