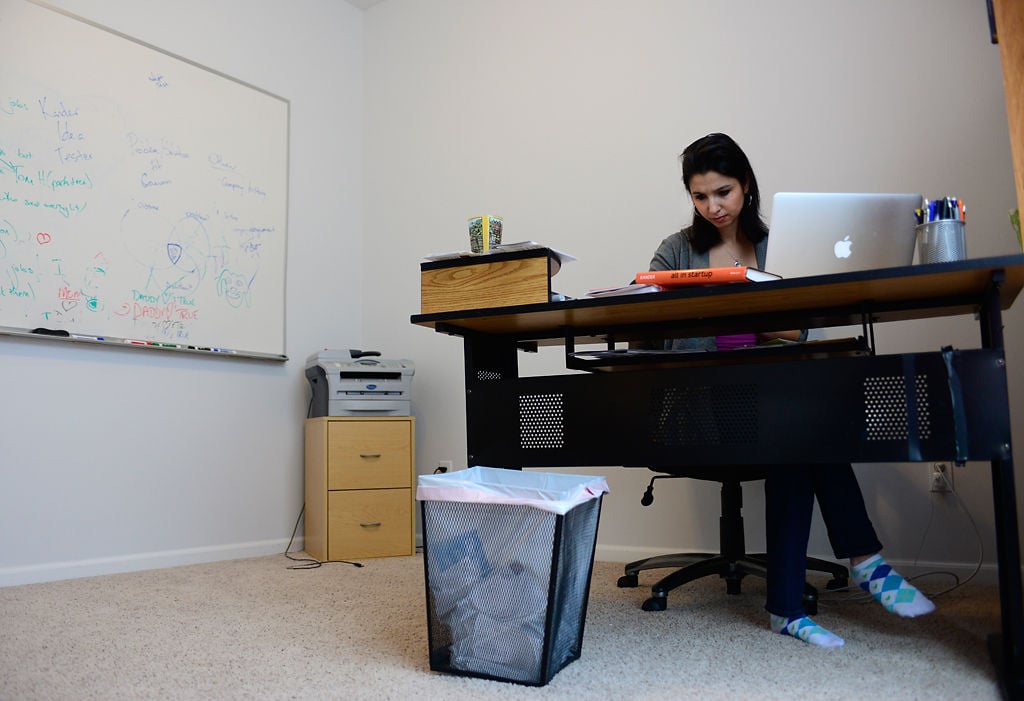 Author Diana Kander works from her home office on Jan. 30. Kander has started nine businesses, the most successful being KR Legal Management, a legal staffing and consulting agency in Kansas City. 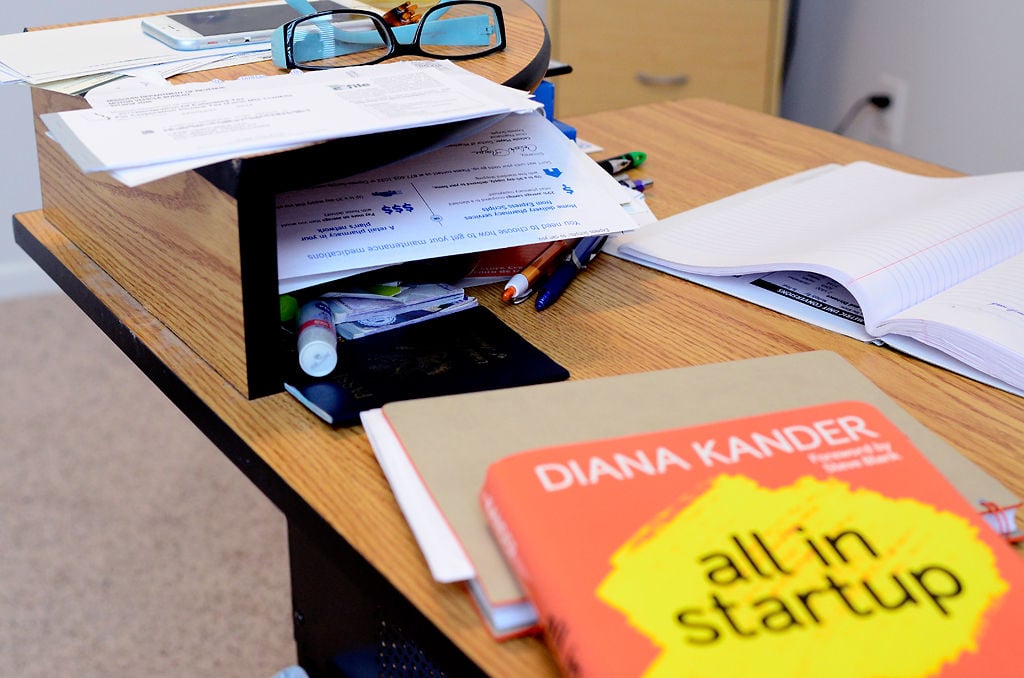 A passport and the book "All in Startup" are on author Diana Kander's desk on Jan. 30. Kander said she travels often to deliver keynote speeches. 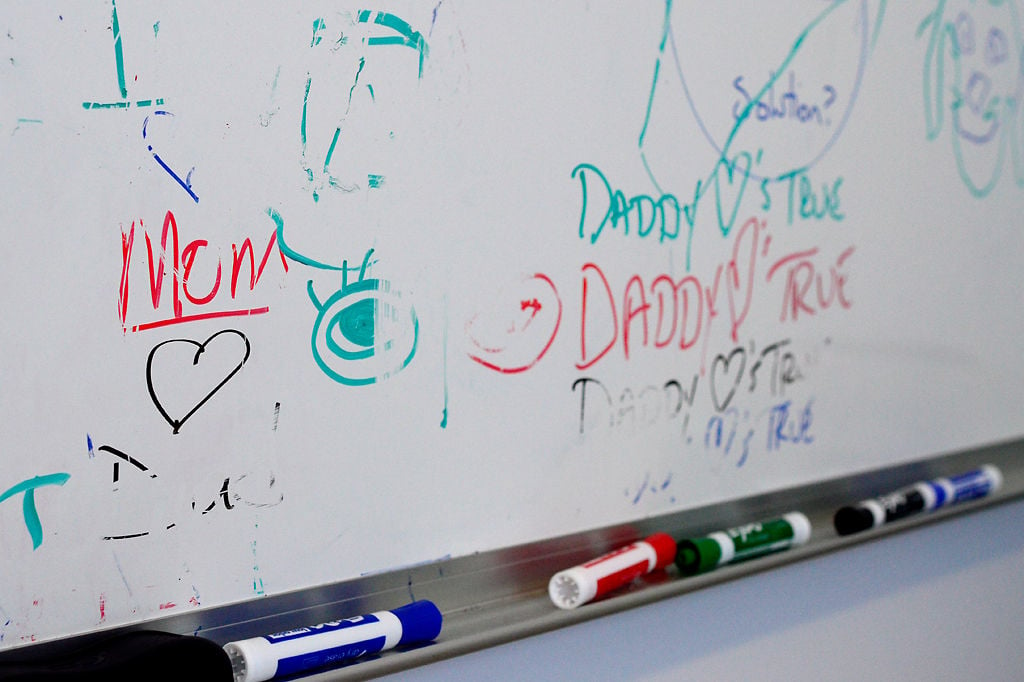 Drawings from author Diana Kander's son, True, cover a whiteboard in Kander's home office on Jan. 30. Kander uses the whiteboard to plan speeches and other activities. 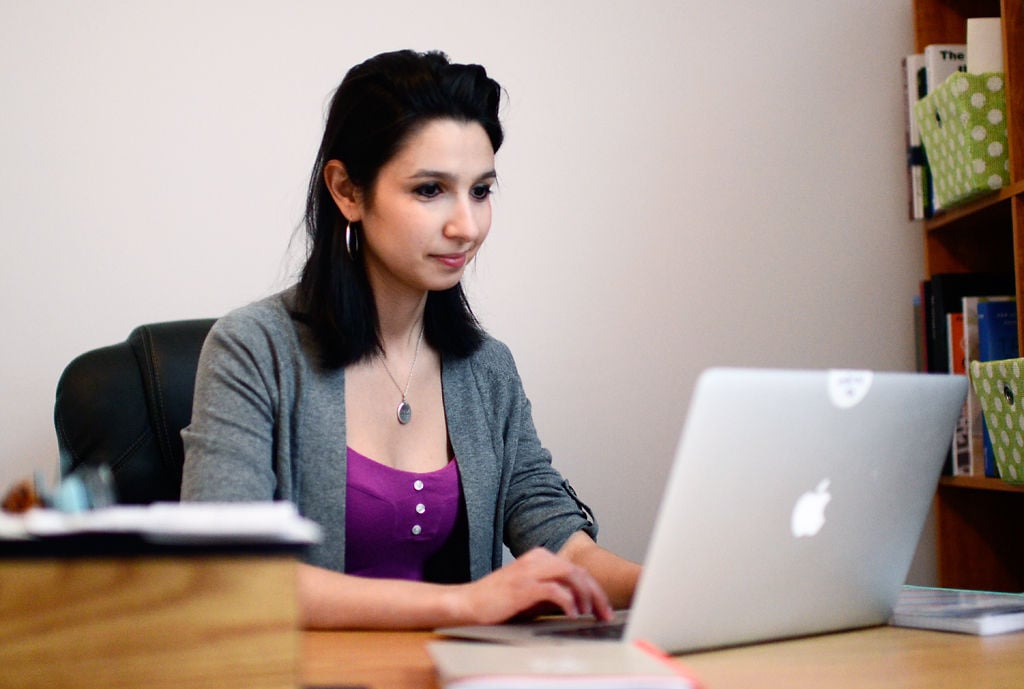 Author Diana Kander answers emails from her home office Jan. 30. Kander teaches a course in entrepreneurship at MU, and her articles are often published in Forbes.

Author Diana Kander works from her home office on Jan. 30. Kander has started nine businesses, the most successful being KR Legal Management, a legal staffing and consulting agency in Kansas City.

A passport and the book "All in Startup" are on author Diana Kander's desk on Jan. 30. Kander said she travels often to deliver keynote speeches.

Drawings from author Diana Kander's son, True, cover a whiteboard in Kander's home office on Jan. 30. Kander uses the whiteboard to plan speeches and other activities.

Author Diana Kander answers emails from her home office Jan. 30. Kander teaches a course in entrepreneurship at MU, and her articles are often published in Forbes.

COLUMBIA — Making her way to the front of the classroom, Diana Kander grabs a green marker from the slate ledge.

"Today, we’re going to talk about your ask, your valuation and your exit," the 33-year-old says, turning to face the class of 19 MBA students in the MU College of Business.

The ask refers to a question students will pose to investors at the end of their pitches. An exit is the return they expect from a project.

Finally, Kanders compares the idea of valuation to both dating and nailing a job after graduation: "He who cares less, wins."

The students chuckle, but they understand her point. It's about getting investors interested in a company without seeming desperate.

For the next hour, Kander poses "what-if" situations to make her students think and prepare them for team presentations about the Missouri startups they are studying as class assignments.

Kander teaches the principles of entrepreneurship to college students. She was a lawyer before she left to become an entrepreneur herself and own equity in nine companies — mostly ventures in dining, construction and real estate.

Along the way, she has altered her approach. She tells her students not to start with a great business idea. Look for a "migraine" problem among consumers, then solve it.

That notion led to Kander's book "All In Startup," which she wrote over two years. It was released in June and is now used in more than 40 universities and community colleges across the country, including Georgetown, Wake Forest and MU.

These days, the author, entrepreneur, teacher, wife and mother of a 1½-year-old boy wants to spread her message beyond the business community.

Less than 24 hours after her class ends, Kander has signed onto a Google Hangout with five fellow entrepreneurs who share their challenges and successes through weekly online meet-ups.

Within minutes, she is asked a common question by one of the entrepreneurs: "How did you become so respected in the startup community?"

The answer lies in her family history. In 1989, she and her parents immigrated to the U.S. as refugees from the Soviet Union. They came with less than $290, and each brought just one suitcase full of belongings. She was only 8.

Within weeks, the family had moved to Kansas City to be closer to a relative. As a young girl, Kander watched her parents, Marina and Leon Kagan, struggle to assimilate. Neither spoke English, and they took jobs at Pizza Hut and TJ Maxx to make ends meet.

Determined to make a better life for their family, her parents decided to start a company. They assembled a laboratory in their basement and began to make dental products, including crowns for teeth.

Ultimately, the Kagans showed their products to the family dentist, who referred them to other dentists in the area. Over the years, her parents moved the company, Dental Harmony Lab, out of the basement and into an office with a staff of 15.

Even as a young child, Kander had a knack for business. In middle school, her father would drive her to a giant flea market in the parking lot of an outdoor movie theater in Kansas City.

She would hunt for bargains on small trinkets, such as sunglasses and electronics, then sell them to her classmates at a markup.

In high school, she met her future husband, Jason Kander, now Missouri's secretary of state. The two went to different schools, but they were "debate rivals."

Diana decided to study at the University of Missouri-Kansas City, and Jason went off to American University in Washington, D.C. The couple reunited at Georgetown Law School in 2002 and married in 2003.

The day after law school graduation in 2005, Diana and Jason packed their belongings into an army-green Jeep and drove back to Kansas City. She took a job at a law firm, and he joined the military and served as an intelligence officer.

Back home, Diana realized that she wasn't happy with her job as an attorney. The entrepreneur inside her kept pulling her toward the world of startups.

As a lawyer, she became friends with a client named Doug Gamble, who flipped poorly performing hotels for a profit. The pair shared a love for innovative business projects.

One day in 2006, Gamble shared his idea for an online pay-per-click advertising company. Eager to do something entrepreneurial, Kander quit her job and became a minority equity owner in SmartLinks Marketing. The company targeted athletic and city visitors' bureau websites with smart, contextual advertising.

Then, quite soon after leaving her job at the law firm, Kander’s excitement turned to apprehension.

"My primary job was to do sales for the new company, and I immediately freaked out because I thought I was terrible at sales," she explained. "I was afraid of calling people on the phone, and that was literally my only job."

Although the marketing company did not take off as planned, Kander eventually overcame her fears and was determined to be a success. Over the next nine years, she became an equity owner in nine businesses — real estate companies, bars and restaurants, a construction management company, consulting firms and a software company.

Not all of the ventures prospered, but a few of the ideas soared, and she found herself in the position of turning a few thousand dollars of capital into millions.

In 2011, the Kansas City Business Journal named her one of the "Women Who Mean Business".

A year later, Kander was named a senior fellow at the Ewing Marion Kauffman Foundation, a private organization that fosters self-sufficiency through education and entrepreneurship.

The same year, her husband was elected secretary of state. The couple moved to Columbia in 2013 to be closer to the capital. Late last month, it was widely reported that Jason Kander was seriously thinking about a run for U.S. Sen. Roy Blunt's seat in 2016.

Early in her career, Diana Kander realized she had a natural instinct for helping people, which motivated her to share her tools and information.

"I saw what entrepreneurship did for me and my family," she said. "I’ve also seen people lose money, marriages and family. I’m passionate about helping people avoid detrimental consequences."

After selling KR Legal Management two years ago, Kander decided to write a fictional account of entrepreneurship to illustrate how it works.

Finding the right approach was challenging. After writing the first half, she asked around 20 entrepreneurs to read it, but their feedback was critical. They told her to work harder to convey her message.

She revised her strategy, going through seven revisions and spending two years on the book. Kander settled on a fiction format instead of an academic textbook to engage the reader more fully in the ideas and narrative. The book is an easy read, and its key passages are highlighted in bold to make her points.

One of the two main characters in the novel is a successful entrepreneur named Samantha, and the other is a struggling business owner named Owen. Both are thrown together at the World Series of Poker, where Samantha steers Owen toward a different business approach.

"If this was a love story, it would be god-awful," wrote one reviewer on Goodreads. "However, the book has very good tips about entrepreneurship."

It was a New York Times best-seller last year in the advice, how-to and miscellaneous section. The Wall Street Journal also listed it as a nonfiction best-seller.

To market the book, Kander turned to crowd-funding site Indiegogo to raise $10,000. She surpassed her goal, raising $31,948, which enabled her to send the book and a companion curriculum to thousands of entrepreneur professors nationwide.

In 2013, Columbia was ranked No. 2 on a list of the top 30 best small cities for young entrepreneurs by the website Under 30 CEO. The reasons included high quality of life, low cost of living, good education and health care.

"The startup scene in Columbia is strong and growing," said Heidi Fuhrman, an organizer of Columbia Startup Weekend, which took place in October at the Museo incubator on Buttonwood Drive.

It was the fourth annual competition, with 40 teams making pitches to web designers, software developers, potential investors and advertising specialists. Kander, one of the judges, said she was impressed by the entrepreneurial spirit in Columbia.

"I’m amazed at all the people that have already done well and are helping the community prosper," she said.

Sitting in the corner of her gray couch one afternoon last fall, Kander pulled her legs to her chest and wrapped her arms around her knees. The house was quiet except for two dogs snoring beneath her feet and the sound of a sleeping baby coming from the monitor on the kitchen counter.

She fielded a call from a student and spoke candidly on the phone: "I want to hear what’s going on and find a solution."

Because her class runs a lot like real life, she urges her students to call if they run into trouble with an assignment.

A self-described private person, Kander has learned that sharing a personal story can often make a crucial connection with people. She sends out a weekly newsletter to subscribers where she offers advice and stories.

"I don’t like sharing at all," she said. "But I’ve forced myself to do it because it helps ideas resonate."

Kander spends most of her workdays teaching, traveling to speaking engagements across the country and developing teaching materials for her book. She also says she loves to spend time with her family. When she and her husband are busy, they work in tandem to care for their son, True.

Yet, she is driven by the goal of getting more and more people to think like entrepreneurs.

"It is so incredibly rewarding and meaningful," she said.