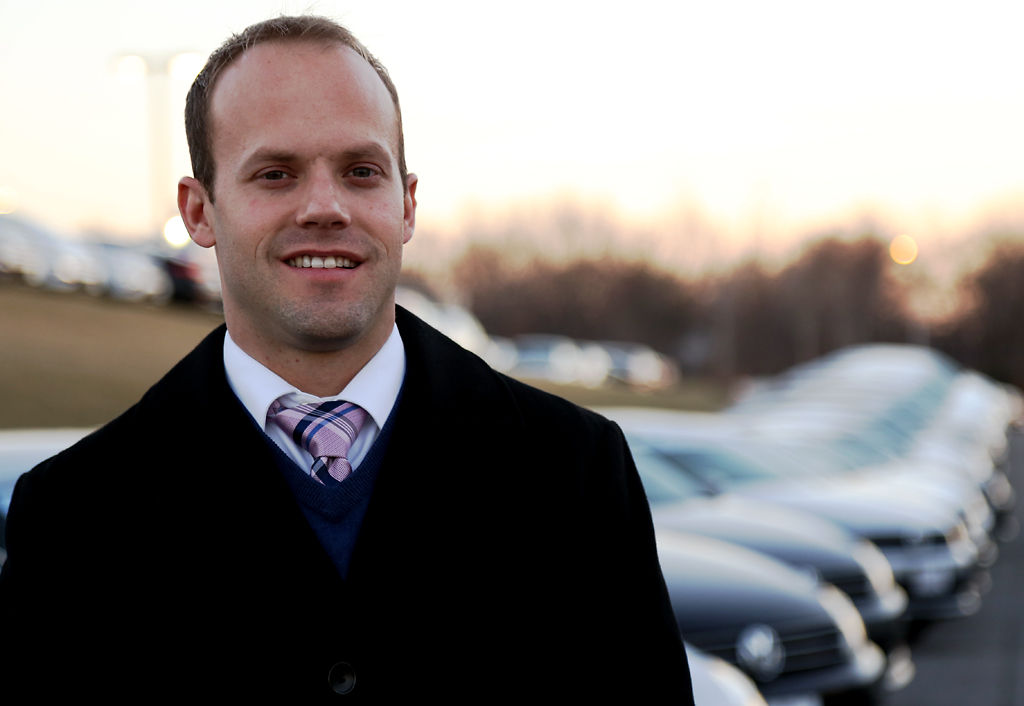 Mike Helton stands among diesel Volkswagens on Jan. 12. Helton works as a salesman for Joe Machens Volkswagen on Vandiver Drive. 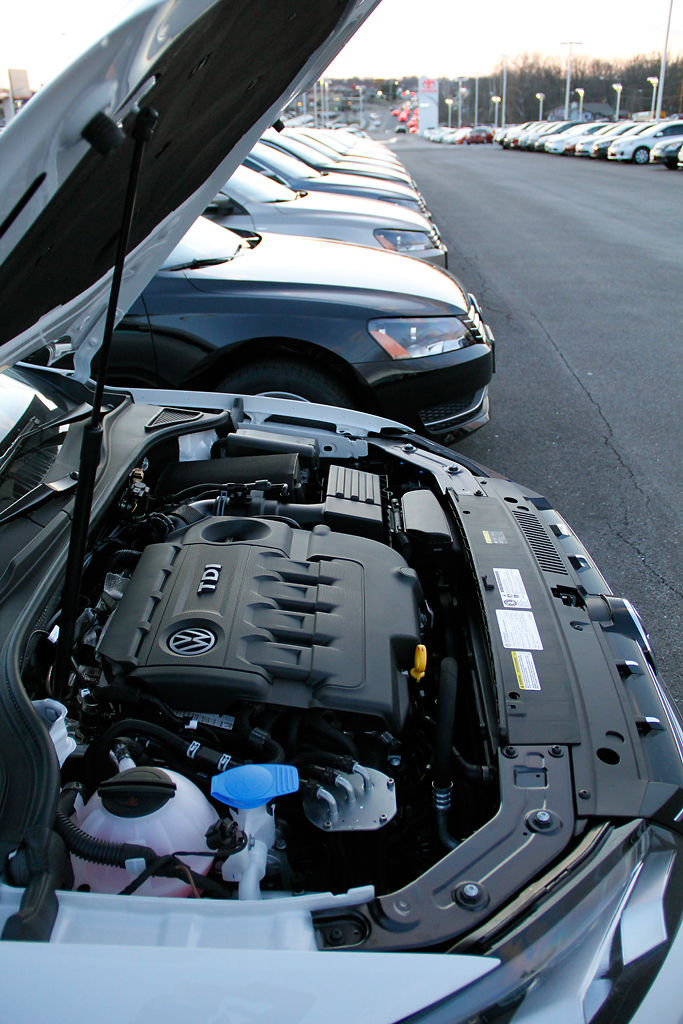 Volkswagen Passats sit on the lot at Joe Machens Volkswagen on Wednesday. Despite a dip in sales in the last few months of 2014, Joe Machens sales professional Anthony Heaper says the Passat's high fuel economy keeps the vehicle popular. 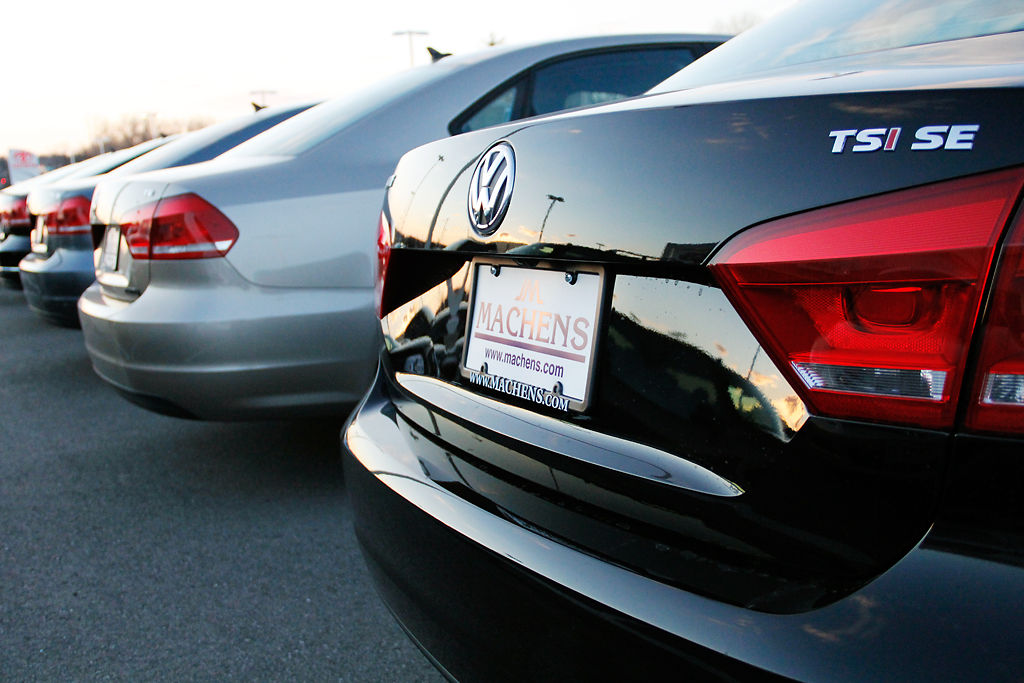 Both gas and diesel models of the Volkswagen Passat sit on a lot at Joe Machens Volkswagen on Wednesday.

Mike Helton stands among diesel Volkswagens on Jan. 12. Helton works as a salesman for Joe Machens Volkswagen on Vandiver Drive.

Volkswagen Passats sit on the lot at Joe Machens Volkswagen on Wednesday. Despite a dip in sales in the last few months of 2014, Joe Machens sales professional Anthony Heaper says the Passat's high fuel economy keeps the vehicle popular.

Both gas and diesel models of the Volkswagen Passat sit on a lot at Joe Machens Volkswagen on Wednesday.

The renaissance isn't defined by clouds of black smoke or oily tailpipe emissions. It's a a noiseless, virtually odorless movement and one that makes the folks who repair, sell and own these vehicles bullish on the future.

EPA clean diesel requirements have cleaned up the exhausts and revamped the fuel in the tanks of diesel vehicles of all sizes. Diesel-fueled compact cars, midsize sedans and sport-utility vehicles are increasingly common on Columbia’s roads and often achieve highway fuel economy akin to their hybrid competitors.

Diesels are certainly gaining traction in the marketplace. Diesel vehicle sales surged by 25 percent for the first half of 2014 compared to the same period for the previous year, said Alan Baum, a principal in the automotive research and analysis firm Baum and Associates in West Bloomfield, Michigan. From January to Nov. 30, 2014, sales increased 30 percent to 35 percent over the same period in 2013.

The EPA’s 2010 regulations remove nitrous oxides from diesel tailpipes and have cut out most of the sulfur from the fuel. The new rules, however, come at a cost. The U.S. Energy Information Administration said in a Dec. 15 report on fuel prices for the Midwest that diesel fuel costs $1.07 more per gallon than regular gasoline. Diesels also now require an additional fill-up of a diesel exhaust fluid containing synthetic urea.

The price difference for diesel is due to a rising demand for the fuel and an additive package that exceeds EPA requirements, protecting modern diesel engines from sticky fuel injectors and soot buildup, said Don North, director of product development and lubricant sales for MFA Oil in Columbia.

Selective Catalytic Reduction systems are a new kind of emissions control system for diesel engine vehicles. The system uses diesel exhaust fluid, an ammonia-based liquid, to turn nitrogen oxide — a pollutant — into nitrogen, oxygen and a small amount of carbon dioxide. The diesel exhaust fluid tank is stored where a spare tire would go in a normal car. This system can reduce emissions in diesel vehicles to meet 2010 Environmental Protection Agency standards.

In the United States, gasoline use has been dropping and diesel consumption climbing, but it's not yet the fuel of choice in America as it is in Europe. North said that diesels are particularly popular in Europe because its diesel vehicles are quiet and refined, while those made in the United States are a bit noisier.

"Drive one of their diesels," North said of the European models. "They're smooth and quiet."

Domestic automakers do see certain advantages for diesel engines. Companies such as Ford and GM maintain it is easier to build a long-lasting diesel engine that meets their emissions and performance targets than it is for a gasoline engine, North said.

Diesels are better suited for highway driving than stop-and-go city driving, Baum said. Heavy- and medium-duty diesel trucks, which often rack up most of their mileage on the highway, represent almost 100 percent of the market. Diesel engines are also installed in European heavy- and medium-duty trucks, typically sourced by Mercedes, Volkswagen or their respective subsidiaries, Baum said. The market share for diesel versions declines as the truck size shrinks.

Owners of modern diesel vehicles are enthusiastic about the latest “bumper crop.”

But there’s also a distinct fun factor to the way a diesel engine delivers its power. Helton likes punching the accelerator between stoplights when he drives the Jetta around town.

“There’s no sacrifice in power,” Helton said. “They have tons of torque, so they’re fun to drive.”

Modern diesel vehicles also are a far cry from the diesel engines of yore that belched black smoke and clattered noisily, Helton said.

“In heavily polluted areas, the air coming in is dirtier than the air that is coming out," Helton said.

North said particulate matter emissions from diesel-fueled tractor trailers were 64 times lower in 2010 than they were in 1998.

Like nearly every newer diesel engine, Unger’s Jetta requires a refill of diesel exhaust fluid about every 12,000 miles. Customers usually get those refills during routine maintenance intervals every 10,000 miles. It costs about $25 to refill the fluid, which is in a secondary tank in the trunk. A warning light on the dashboard alerts the driver when 20 engine starts remain. If the diesel exhaust fluid runs out, the vehicle won't start until it's replenished, Helton said.

Diesel engines before 2010 used a filter to capture the soot-like particulate matter they used to spew. But when too much matter accumulated, the trap acted like a dust-packed ceiling fan. Injectors would squirt diesel fuel into the trap to burn the soot off.

When diesel manufacturers adopted the 2010 EPA requirements for a diesel exhaust fluid system and a catalytic converter technology called Selective Catalytic Reduction, customers noticed more power and economy. They no longer ask about modifications that can alter emissions and warranty coverage, Miller said.

Diesel emissions standards are stricter in the United States than in Europe. European nations are changing their emissions standards to mirror those from the EPA, though there is no direct connection between the EPA and European organizations. For example, France's government wants to cut back its current diesel fleet — 80 percent of that nation's vehicles — but that goal's future is unclear. Some automakers have pushed back due to increased costs and the current state of the European economy, Baum said.

"Volkswagen has indicated it is fully committed to diesels, while some of the other automakers are in a bit of a 'wait and see' mode based on where regulations in Europe are headed," Baum said.

Regulation changes could raise the costs of diesel vehicles from European countries, or it could encourage automakers in those countries to work more closely with American companies on new technology to expand the diesel product range, Baum said.

Baum said some automakers are more committed to diesel than others. Volkswagen is leading the charge. Diesel versions of its Jetta compact sedan and its Passat sedan represented about 30 percent of sales for each model at their peaks.

Some diesel vehicles, including the Jetta and Passat, saw lower sales in the closing months of 2014. Plummeting gas prices could be a reason.

The popularity of the 1500 Ram EcoDiesel pickup, which Ram released in early 2014, is a big driver of the diesel resurgence, Baum said. Chrysler has been "aggressive in pricing" it, he said, and hopes that by this spring the EcoDiesel will represent 20 percent of Ram's total sales.

"I could sell more if I could get more," Miller said. "In the future, we'll see more on the showroom floors."