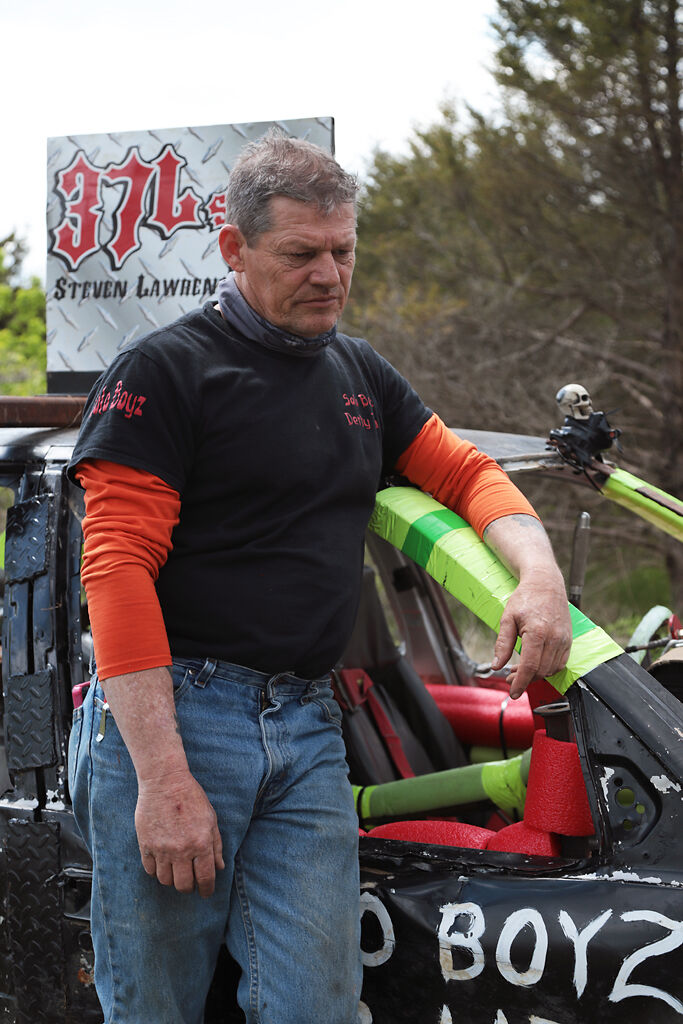 Wil Lawrence prepares himself to compete in a demolition derby on April 24 in Higbee. Lawrence competed with his team, the Solo Boyz. 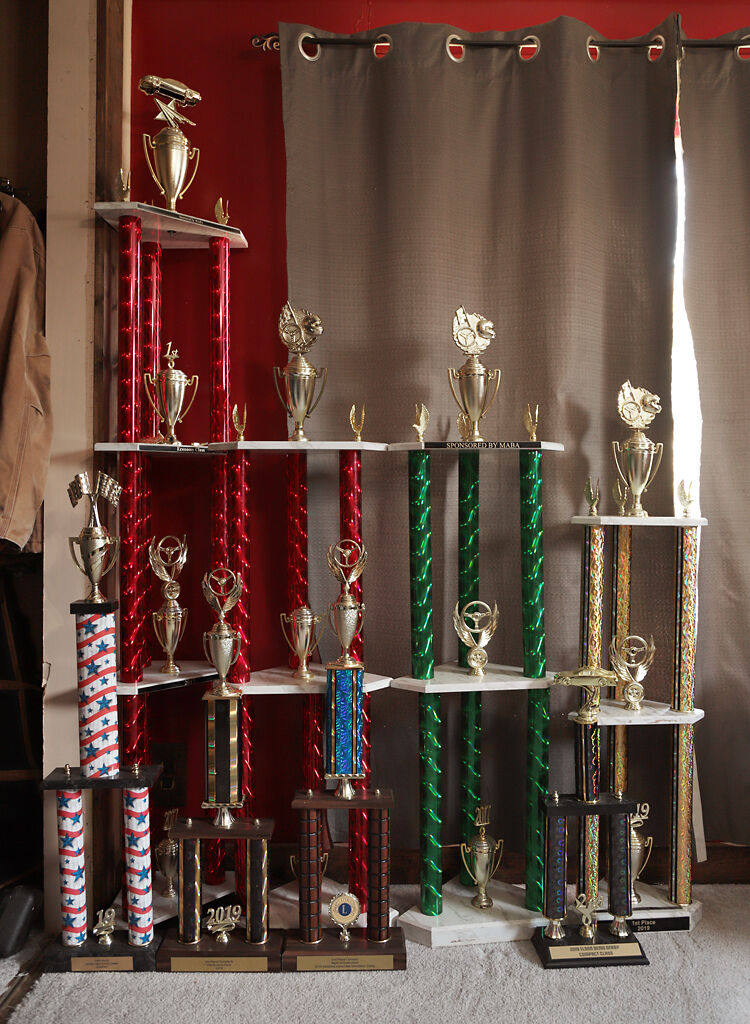 Demolition derby trophies are on display on Saturday, April 24, 2021, in Higbee. The trophies were earned by Steven Lawrence over multiple years of driving. 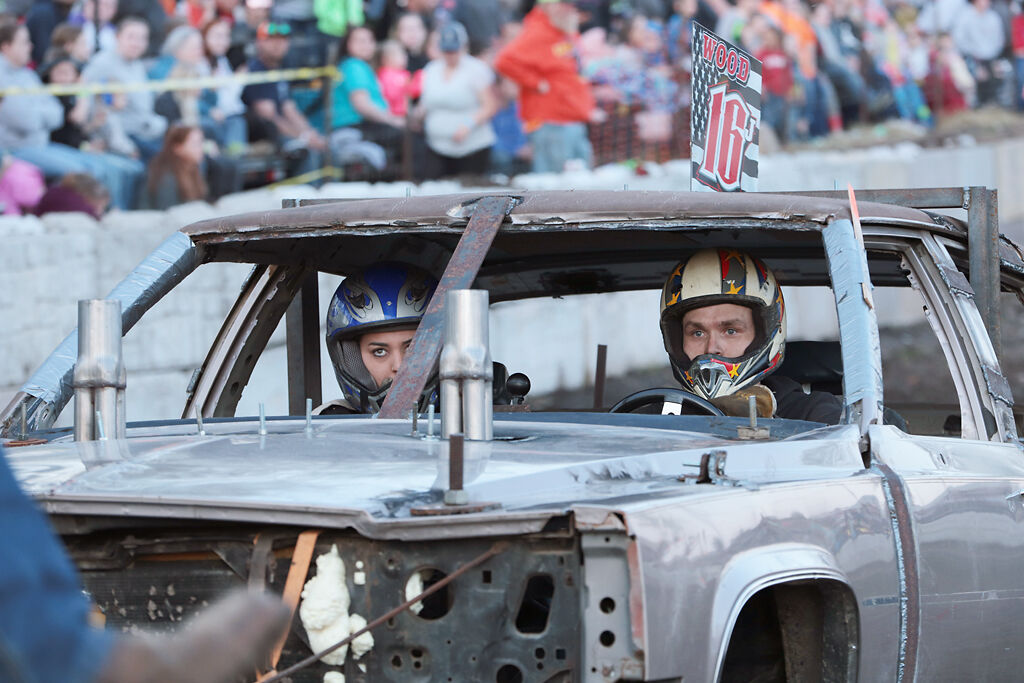 Jordan Wood lines up his car before a demolition derby heat on Saturday, April 24, 2021, in Higbee. Heats were arranged based on car type: full size, compact and gut-n-go. 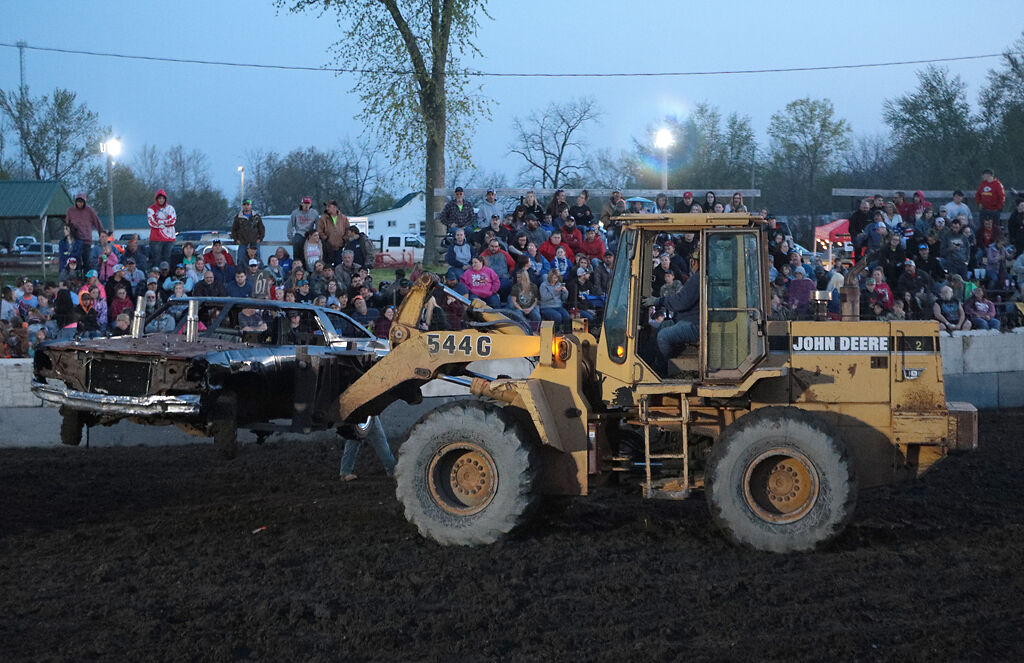 A John Deere tractor is used to remove an immobilized car on Saturday, April 24, 2021, in Higbee. The tractor also helped move logs to maintain the demolition arena’s boundary. 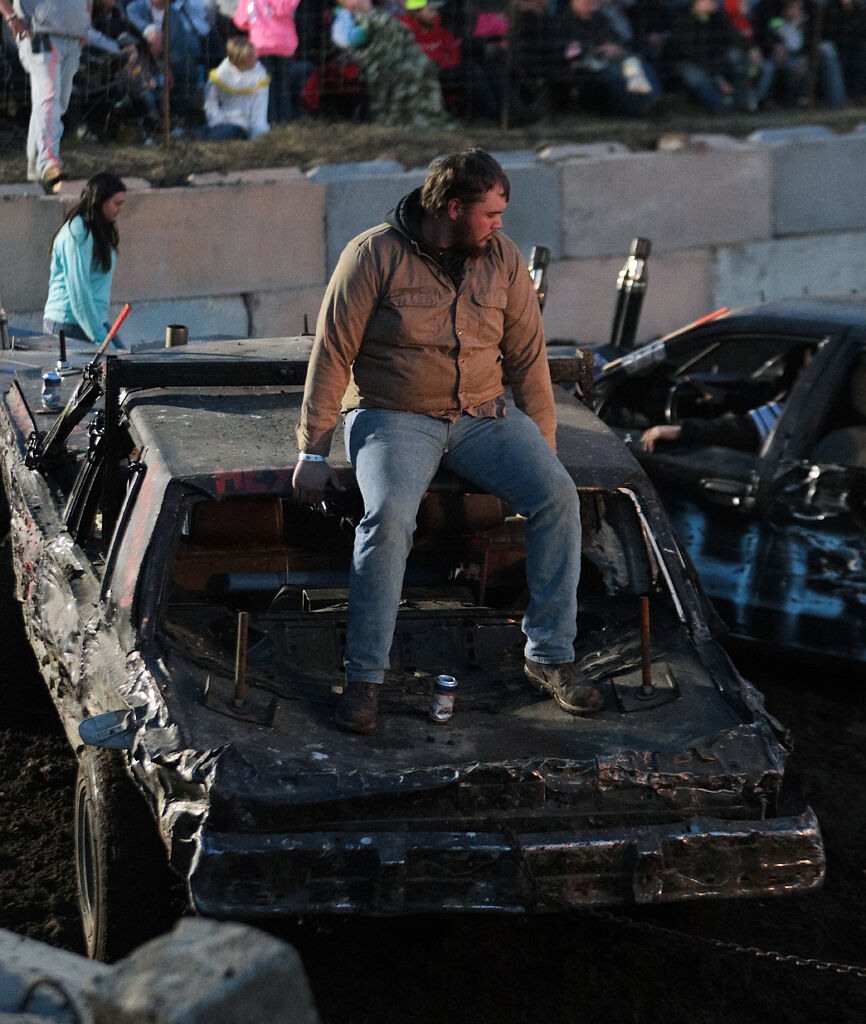 Austin Schaefer sits on top of his demolition car on Saturday, April 24, 2021, in Higbee. Drivers had to abandon their cars mid-heat once they could no longer move. 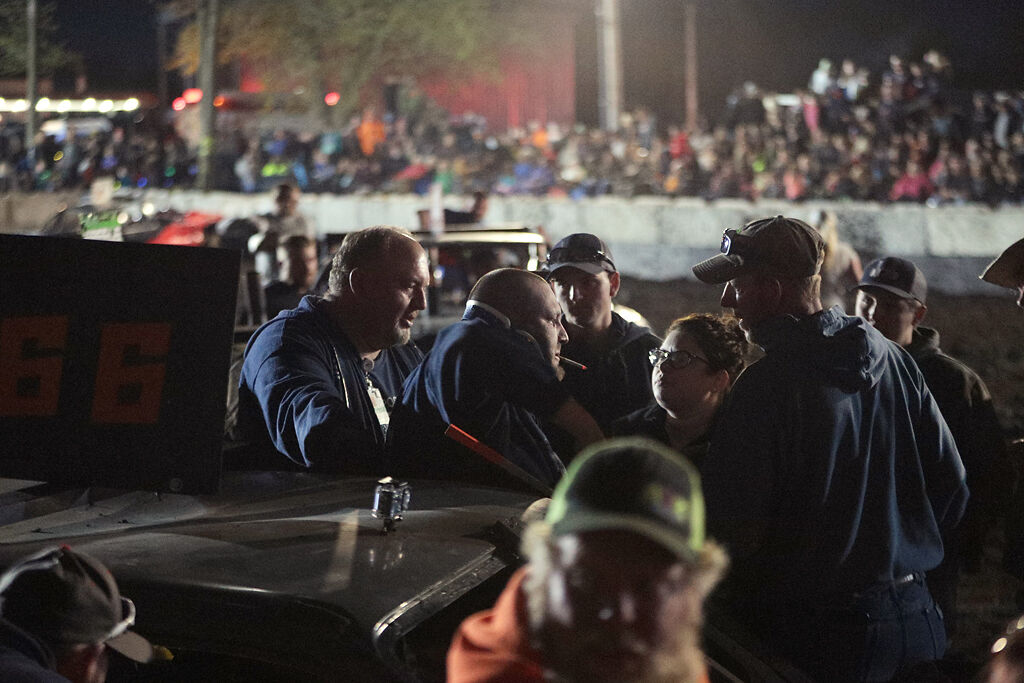 Medics and fans help Derek Ranks out of his demolition car on Saturday, April 24, 2021, in Higbee. Ranks sustained a neck injury, but that did not stop him from having a cigarette. 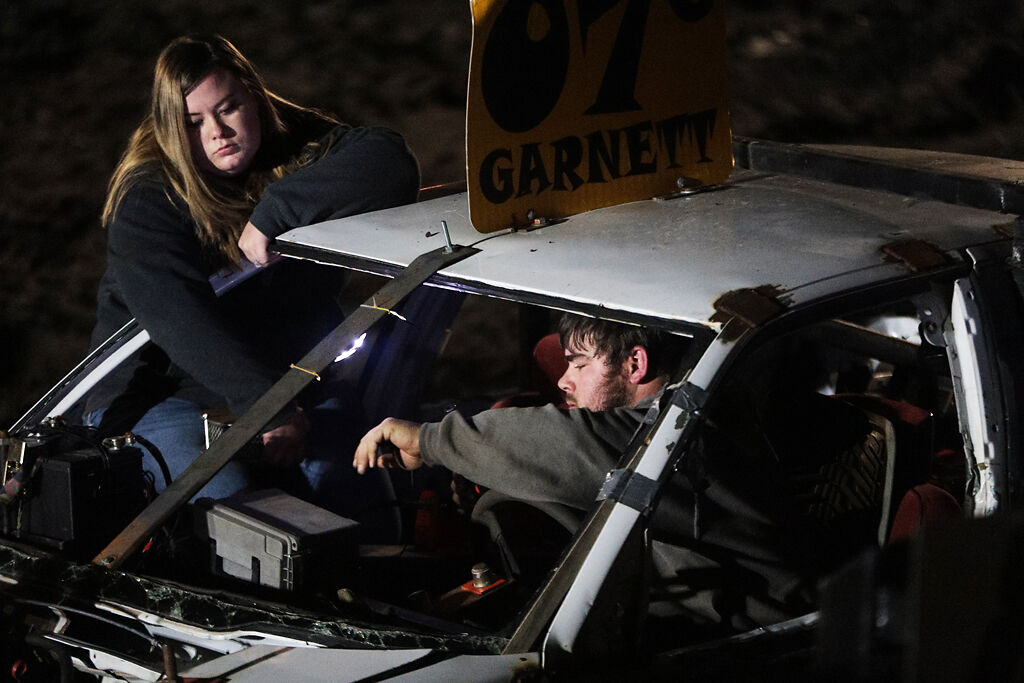 Cheyenne Frederick and Jacob Garnett try to fix Garnett’s car during a heat on April 24 in Higbee. Garnett’s car stopped running shortly after the heat started.

The destruction is relegated to the arena. The healing starts in the garage.

For the patriarchs of two demolition derby families, creating the strongest machines to endure the crushing battle is actually a healing affair.

In a garage on the edge of Clark, Missouri, the Solo Boyz team co-founder Wil Lawrence is surrounded by family and friends as they modify their cars for an upcoming beating.

Meanwhile, over in Brookfield, the Plan B derby team, made up of Ronnie Pickens and his two sons, Tyler and Patrick, is preparing cars to go toe-to-toe against the Solo Boyz. In their respective garages, both teams weld and modify their cars for an upcoming demolition derby in Higbee. The ad for the FFA sponsored event refers to the field of play as a ‘pit’.

The mangled, twisted metal sitting around both teams' workshops show that this isn’t their first show. The detritus proves experience in the pit while mapping a progression from lifestyles that weren’t helping their family relationships.

“I’ve done a lot of crazy things in my life but derbying probably saved it,” Pickens said. After persuading his father to jump back into the driver’s seat after a 15-year prison sentence for stealing cars, Tyler and Ronnie Pickens formed Plan B in 2018.

“A lot of guys know that we’ve built some pretty hard cars,” Ronnie Pickens said. “They know we’re there.”

Lawrence reflects on over two decades of derbying.

“I owe derbying everything I could give it, until I can’t do it anymore,” Lawrence said. He describes derbying as a form of rehab from meth and cocaine addiction. Now, he describes himself as an adrenaline junkie.

“I enjoy that natural high you get when you get in one of those cars,” he said. Derbying has also brought him and his son, Steven, closer together.

“Dad was on the wrong path for a while and when he finally got on the right path, we started doing it (derbying) as a family thing. And see where we are at now?” Steven Lawrence said.

“The derby nights and everything that goes on at the derbies makes it worth it,” Tyler Pickens said.

“Win or lose, we’re gonna win,” Wil Lawrence said. “In our eyes, we already won; we are doing what we love.”