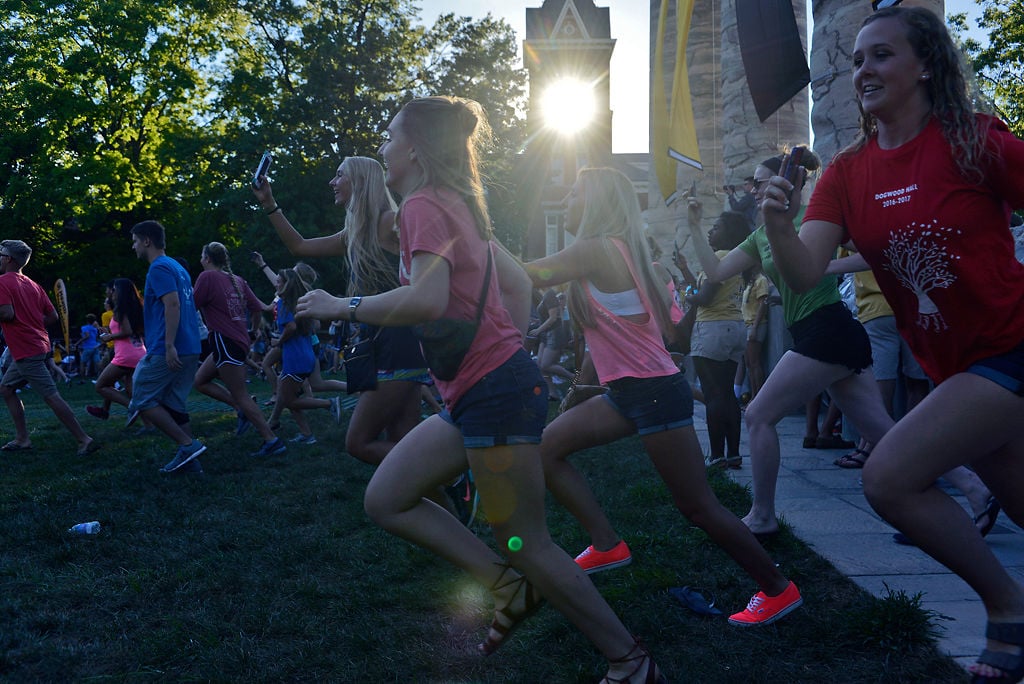 Students run through the MU Columns on Francis Quadrangle in August 2016, during the annual Tiger Walk symbolizing their entrance to the university. MU is stepping up student recruitment efforts in the wake of a 15 percent enrollment drop over last year's freshman class, which was already 21 percent smaller than the year before.

COLUMBIA — Double down on phone calls. Double up on school visits. Talk to pastors, counselors, farmers, researchers and teachers.

That’s Jesse Hall’s recipe for increasing MU’s enrollment after a year of sharp decline. It’s what MU administrators have done for years. This year, rather than rolling out new initiatives or pouring money toward increasing enrollment, they are multiplying past efforts.

MU is staring down its second year of an enrollment decline, steep budget cuts and layoffs. Enrollment declines last year were particularly concentrated in minority, low-income and rural students, data show, but officials still point to demographic trends and reverberations of the Concerned Student 1950 protests in 2015 to explain this year’s decline.

“They think they have a public relations problem, but my guess is that’s only a small part of it,” said Richard Hesel, principal for Art and Science Group in Baltimore, a higher education consulting group.

Although MU administrators have said a declining population of high school graduates and continued complaints about the 2015 protests have affected enrollment, Hesel pointed to universities across the country that have identified shortfalls and conquered them.

Data from the National Student Clearinghouse Research Center show universities, particularly in the Midwest and Northeast, have declining enrollments and a declining high school graduate pool, but several are using new strategies.

Washington University in St. Louis contracted Hesel to increase its number of first-generation students. After two years of effort, the numbers have risen, the St. Louis Post-Dispatch reported. The University of Maine, like other Northeastern and Midwestern universities, saw enrollment declines, so it decided to match the in-state tuition of several regional universities. Now headed into its third year, the Flagship Match program has seen lasting gains in enrollment from Maine’s neighboring states, Inside Higher Ed reported.

“They want to tell you it’s all about a population decline or demographic shift and they can’t do anything about it,” Hesel said. “Not true! What do they have to do? They have to increase their market share and make it more attractive for students.”

MU projected that about 4,000 first-time college students will enroll in August, a 15 percent drop from last year. In August 2016, MU saw its freshman class decrease by 21 percent.

These smaller class sizes aren’t unique to MU. Overall undergraduate enrollment at four-year public universities decreased by 0.3 percent from fall 2015 to fall 2016 and has decreased steadily within Missouri, according to data from the National Student Clearinghouse Research Center.

At MU, that enrollment decline between the 2015-2016 and 2016-2017 school years was felt by a large swath of the state. A steep percentage decline in first-time students, between 50 to 100 percent, occurred in 23 Missouri counties, from urban St. Louis City to rural Mississippi and New Madrid counties, according to MU data.

MU has maintained that the steep decline in first-time students in the fall of 2016 was a fluke. However, a look at overall undergraduate enrollment shows declines across the state as well. While some counties held steady or added students, fewer and fewer students attended MU from most of the state's counties. The declines were heaviest in rural areas.

Chuck May, the director of MU’s admissions office, said he and his staff aren’t targeting any particular population with their August recruitment efforts. He said the whole state sends fewer MU students, so his admissions staff is reaching out more to the whole state.

“MU goes way beyond by working with North Callaway High School to set up visits for all sophomores in the spring,” Melissa Head, a counselor at North Callaway, wrote in an email.

She added that North Callaway’s agriculture instructor sets up a visit with MU's College of Agriculture, Food and Natural Resources each fall, and that’s a huge recruiting tool.

“Students seem to remember these opportunities way more than just talking to someone. Therefore, it seems like the 6-10 students we have go there typically are in the Agriculture area or Medical fields," Head wrote in the email. "Over the years we have had business majors, engineering, and education majors as well, but Ag and Medical outweigh them.”

Typically, fears about safety and security top the list of prospective students’ worries, said Patrick Elmore, assistant director of admissions at MU. Often, questions about the 2015 protests arise from a sense that the protests made campus unsafe.

He noted that MU’s Freshman Interest Group, or FIG, program, which creates groups for freshmen to live, study and take classes together, often appeals to rural students who worry about finding a community on campus.

“They think MU can be large and intimidating,” Elmore said. “But you can thrive here.”

Retention is Pelema Morrice’s focus. Now MU’s vice provost for enrollment management, he has worked at both public and private universities. His chief role is in encouraging MU’s various arms of admissions, enrollment, recruitment and financial aid to gather a diverse and robust student body. New programs developed in the past year include the Cherng Summer Scholars Program, which funds undergraduate research, and the MizzouMACC program, which aims to help students at Moberly Area Community College easily transfer to MU.

Morrice has only been on the job since September and said he hasn’t met one-on-one with many students. But he said that, from the 3,000-foot level, he’s getting a feel for Missouri, MU and MU’s students. As MU doubles down on recruitment efforts, Morrice said he wants to focus not just on the racial diversity of the student body but to encourage students from all geographic locations, economic classes, ages and races to apply and stay at MU.

Another newcomer to MU’s recruitment and retention efforts is focusing on the rural areas of the state where MU may not draw a large proportion of its students but where its research has an outsized impact.

In his short time at the university, Marshall Stewart, vice chancellor for extension and engagement, has traveled to each corner of the state, making late-night visits to St. Louis and Rolla before returning home for a few hours of sleep.

“A lot of Missourians don’t really understand the economic value of this university,” he said. “We have to reintroduce ourselves to them about our value beyond educating their children.”

Formerly director of college leadership and strategy at North Carolina State University, Stewart has a background in agricultural education and a folksy approach to the bureaucratic problem of organizing MU’s many offices.

He tries to set up not only formal meetings, but also porch visits and kitchen conversations about the economy, manufacturing, and lack of access to health care and the internet. Those conversations, he believes, translate to a greater trust in the university and a willingness to commit time, students and resources toward MU.

As of the Monday deadline, 4,009 students paid the fall enrollment deposits. That represents about a 15 percent drop from fall 2016.