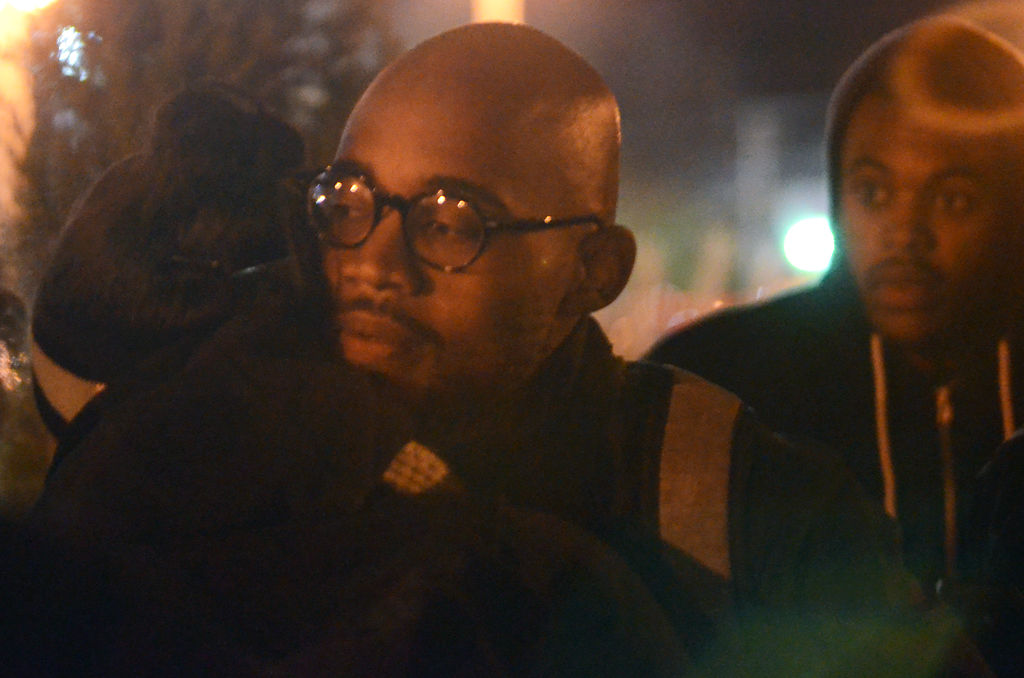 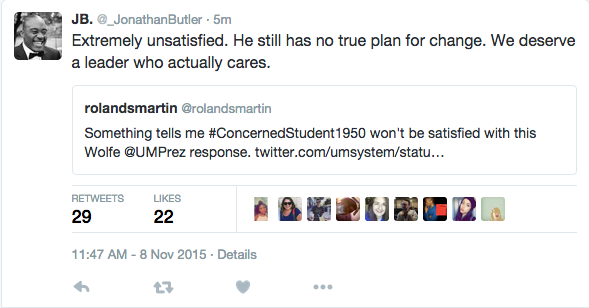 This story was first published the night of Nov. 8. It was later updated to include information about an UM System Board of Curators meeting Nov. 9. At that meeting, Tim Wolfe resigned from his position as UM System President. The resignation came a week after Jonathan Butler, an MU graduate student, embarked on a hunger strike to demand Wolfe's removal from office.

COLUMBIA — After multiple incidents of racism at MU and a lack of response from UM System leadership, MU graduate student Jonathan Butler embarked on a hunger strike to catalyze change. Here are some answers to common questions about Butler's protest:

2. Why does Butler want UM System President Tim Wolfe out?

5. Has the UM System Board of Curators responded?

In a Nov. 2 letter announcing the hunger strike, Butler asked the UM System Board of Curators to fire UM System President Tim Wolfe. The curators, the system's governing body, has the power to remove Wolfe from his position. Butler did not send a letter to Wolfe asking him to resign.

2. Why does Butler want Wolfe out?

Because of Wolfe's inaction in response to a "slew of racist, sexist, homophobic, etc., incidents that have dynamically disrupted the learning experience at the University of Missouri," according to Butler's letter.

Butler and other student activists stopped Wolfe's car during the Homecoming Parade on Oct. 10 while they condemned MU's history of racism.

Wolfe did not respond to the group's concerns while he was in the car. His driver revved the convertible's engine, and the car bumped into Butler. Some bystanders at the parade heckled Butler and the activists.

He said Wolfe has the power to create change within the four-campus system, but that Wolfe has remained silent about racism that makes students of color feel unsafe and unwelcome. Wolfe has only spoken out when students have pressed him, Butler said.

"When you look at something like Tim Wolfe — when you look at the way the system is set up — what Tim Wolfe is representing at this moment is this corrupt system that doesn't value the lives of marginalized students," Butler said in an interview.

In the 23 days between the Homecoming Parade and Nov. 2, when Butler began his hunger strike, "(Wolfe) had all the time in the world to come up with a statement to actually say that he cares about black students, to come up with something, and he failed to do so," Butler said.

Butler has denounced incidents of black students being called racist slurs, among other acts of discrimination targeting minorities.

In early September, Missouri Students Association President Payton Head was called the n-word behind a fraternity house in Greektown. Members of the Legion of Black Collegians were called the same slur during an event at MU's Traditions Plaza in early October. And, on Oct. 24, a swastika drawn with human feces was found in an MU residence hall.

"That's not what leadership is. We look at his physical job description, (which is to) provide a safe learning environment for students. He's not fulfilling that part of the duty."

There are two parts to the answer, Butler said.

"One, is that you have to look at all the student organizations and people who are already asking for similar things like that (policy changes), so I don't think it's necessary to reinvent the wheel when there's already students protesting, advocating to get measures like those put into place."

The second reason is that for all of Loftin's flaws, Butler said, the chancellor is more sincere in his responses and willing to listen to students.

"I'm critical of Chancellor Loftin because he does play a crucial role in what happens on campus, but in the meetings I've seen with him, he's actually more willing to understand how systems of oppression, how racism and all these things work," Butler said.

After Wolfe met with Butler on Friday, five days after the hunger strike began, Wolfe issued an apology in a news release.

"I regret my reaction at the MU Homecoming Parade when the Concerned Student 1950 group approached my car. I am sorry, and my apology is long overdue," according to the statement.

"My behavior seemed like I did not care. That was not my intention. I was caught off guard in that moment. Nonetheless, had I gotten out of the car to acknowledge the students and talk with them perhaps we wouldn't be where we are today."

Butler and other student activists have been skeptical about the sincerity of Wolfe's statements in the past. They are impatient with Wolfe's calls for dialogue, and they want action.

"We want to find the best way to get everyone around the table and create the safe space for a meaningful conversation that promotes change," the statement read. "We will share next steps as soon as they are confirmed."

"Extremely unsatisfied," Butler tweeted after the statement came out. "He still has no true plan for change. We deserve a leader who actually cares."

5. Have the curators responded?

The curators have issued no public response.

Curators David Steelman and Phillip Snowden had no comment Nov. 2 after Butler's hunger strike started. None of the other curators have responded to requests for comment.

At 7:20 p.m. on Nov. 8 the curators announced they would meet at 10 a.m. on Monday, Nov. 9, for an executive session. The board will have a brief public session followed by a closed session. Then, it will reconvene the public meeting.

Nothing else has worked, Butler said.

"The number one question, concern I've gotten from everyone is … please don't do this, we value you your life, there has to be another method," he said. "The question I ask right back is 'what method?'"

"If you look at the past two years, and all that students have done, black students, brown students, students of color and marginalized students have been fighting and protesting and writing letters and doing all these things over several years," Butler said.

"We, as students of color, marginalized students, we still can't get an answer years later. It takes these drastic measures for us to be taken seriously, for us to actually be considered humans," Butler said.

Yes. Butler has not eaten since the morning of Nov. 2, when he had breakfast before 9 a.m.

He updated his will before the strike, he said. Butler spoke with his physician and his pastor before making his decision. He confirmed Thursday that he signed a "do not resuscitate" order, which instructs doctors not to perform CPR.

Butler began the strike at 9 a.m. on Nov. 2. He said that he will continue until Wolfe is out of office or until his own life is over.

Butler is a part of Concerned Student 1950, a group of black student activists that first came into public eye when they protested Wolfe at the Homecoming Parade. The group was named after the year Gus T. Ridgel, the first black graduate student at MU, was admitted to the university.

The original group had 11 members, but in an Oct. 20 letter to MU, the members wrote that Concerned Student 1950 "represents every Black student admitted to the University of Missouri since (1950) and their sentiments regarding race-related affairs affecting their lives at a predominantly white institution."

Concerned Student 1950 is pushing for the removal of Tim Wolfe from office, but the group has several other demands.

According to previous Missourian reporting, the demands include:

Students from Concerned Student 1950 as well as other activists and allies are camping out in solidarity with Butler until Wolfe is no longer the system's president.

No. Butler has stopped by the camp out, but he's not sleeping in the tents.

Some students are fasting in solidarity with Butler, but they're only fasting one day at a time, according to previous Missourian reporting.

Wolfe was in Kansas City on Friday night to speak at a fundraiser. Student activists from MU traveled to Kansas City and met up with students from the University of Missouri-Kansas City. The students met Wolfe by the Kauffman Center and asked him to define systematic racism.

"It's — systematic oppression is because you don't believe that you have the equal opportunity for success — " Wolfe said in a video of the incident.

The students were unimpressed with his answer.

On Saturday night, black members of the MU football team tweeted a photo in support of Butler. They announced that they would not participate in any football related activities until Wolfe was gone from his position.

Sixty of the 124 football players are black, but it was unclear Saturday night exactly how many of them were boycotting.

On Sunday morning, coach Gary Pinkel and white football team members announced they supported black players. Pinkel tweeted, "The Mizzou Family stands as one. We are united. We are behind our players. #ConcernedStudent1950 GP."

The Mizzou Family stands as one. We are united. We are behind our players. #ConcernedStudent1950 GP pic.twitter.com/fMHbPPTTKl

Pinkel released a statement Sunday evening saying that there was no practice Sunday.

"After meeting with the team this morning, it is clear they do not plan to return to practice until Jonathan resumes eating," Pinkel said in the statement.

At protest site, defeat and determination among signs of support