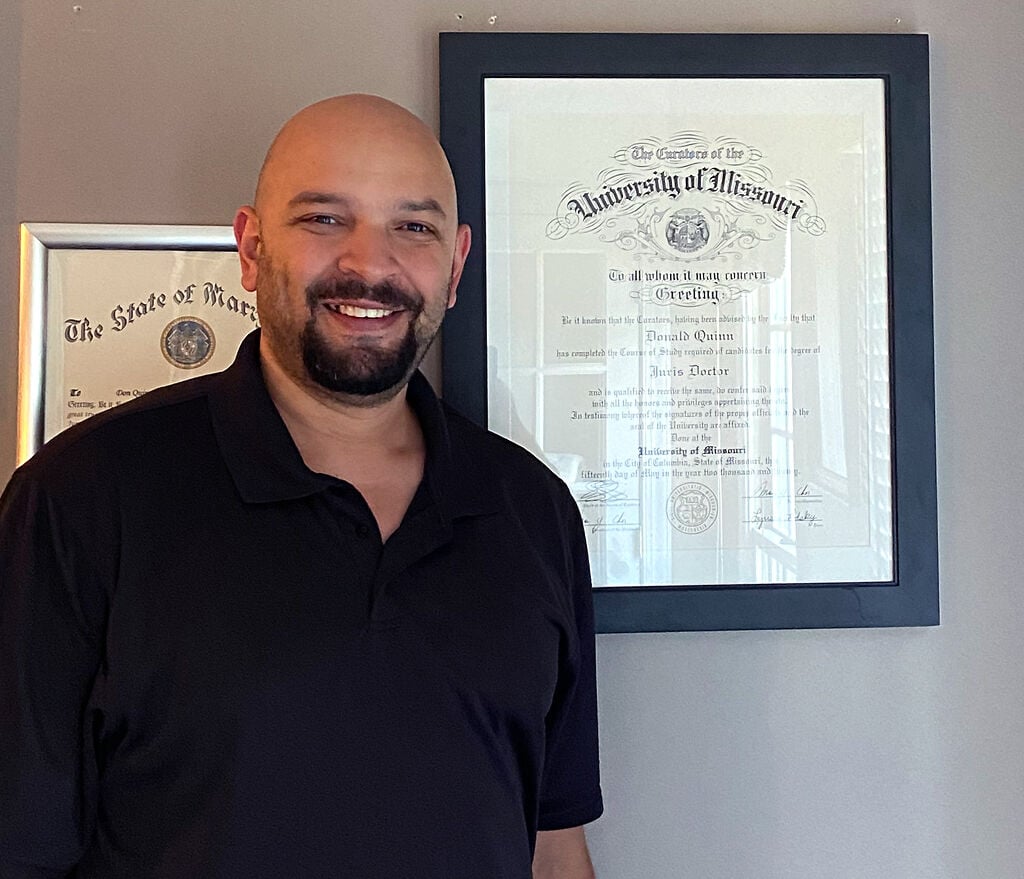 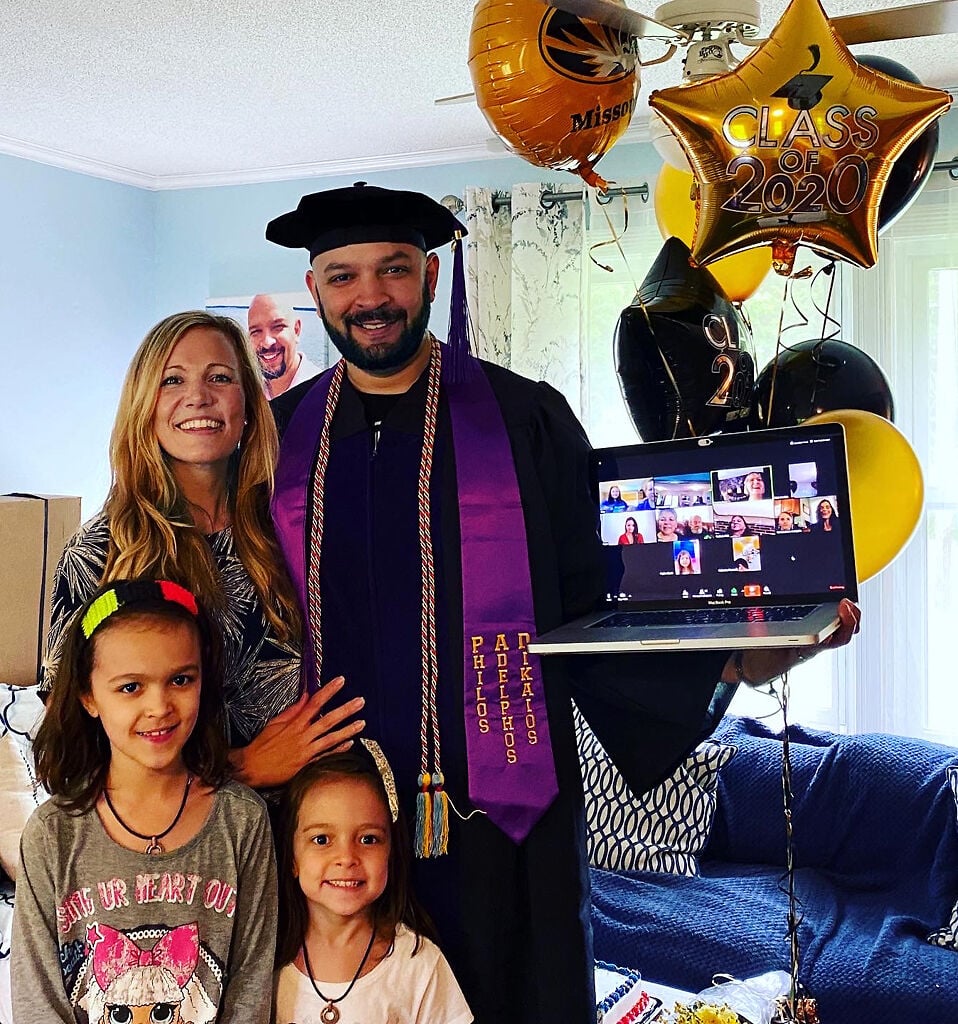 MU School of Law graduate Don Quinn celebrates his graduation with family over Zoom. Due to COVID-19, the law school was unable to have an in-person commencement ceremony. 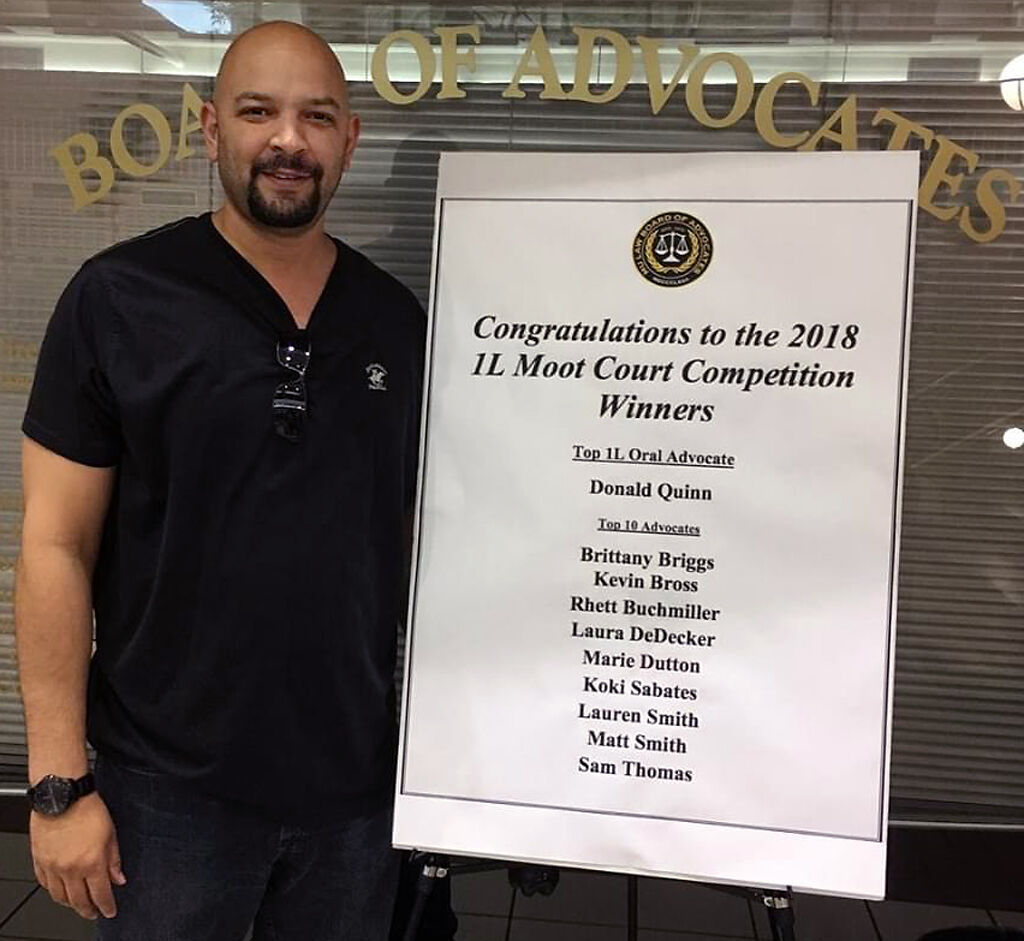 Don Quinn stands next to a list of Moot Court Competition winners. Quinn won the title of top oral advocate at the end of his first year of law school.

MU School of Law graduate Don Quinn celebrates his graduation with family over Zoom. Due to COVID-19, the law school was unable to have an in-person commencement ceremony.

Don Quinn stands next to a list of Moot Court Competition winners. Quinn won the title of top oral advocate at the end of his first year of law school.

Under normal circumstances, taking the bar exam is anxiety-inducing. Add a pandemic to the mix, and you’ve got something bordering on a “hell, no.”

This year’s exam is scheduled for Tuesday and Wednesday at the Holiday Inn Executive Center in Columbia and the Tan-Tar-A Conference Center in Osage Beach.

More than 400 people are expected to take the exam in Columbia. Juris doctor degree-holders must take the 12-hour, two-day test to practice law in Missouri.

The Missouri Board of Law Examiners announced its intention to move forward with the exam at the say-so of the Missouri Supreme Court, which said in late April that the test must go forward but with precautions.

Columbia/Boone County Department of Public Health and Human Services waived a previous order barring gatherings of more than 100 people to allow the exam to take place.

That has some grads and professors worried. Some have even decided to postpone taking the test — many citing health issues that compromise their immune systems or those of family members.

“The issue is, having so many people in a space even with social distancing measures is really a scary proposition at the moment,” said Lyrissa Lidsky, dean of the MU School of Law.

To combat the spread of the virus, examinees will be required to wear masks and be placed in testing rooms at reduced capacity to enable social distancing.

Testing groups will also be staggered to avoid all those taking the test being in the same space at once, said Board of Examiners Executive Director Andrea Spillars.

Some law school graduates and professors asked the Missouri Supreme Court to rethink its decision. In a letter sent to the Supreme Court on behalf of the 288 students who signed a petition, prolonged strain on mental health, the board’s “vague” preventative measures and financial implications for graduates were cited as some reasons to cancel the exam and pursue an alternative solution.

“As we started to see (an increase in COVID cases in Missouri), the concern started to rise about taking the exam in person,” said Don Quinn, who graduated from the MU School of Law in 2020.

A couple of groups formed and began emailing professors, deans and each other to create momentum for petitioning the Missouri Supreme Court to allow grads to either take the bar online or give them diploma privileges, Quinn said.

Diploma privileges would allow graduates a license to practice law in Missouri without having to take the bar exam. Wisconsin is the only state that allows this.

Utah, Washington and Oregon have granted diploma privileges because of the pandemic. California, Georgia and New York are among states that have postponed the exam until September or October.

The Missouri Supreme Court held firm, saying alternatives to the bar exam do not “adequately ensure the core function of licensure, which is to protect the integrity of the profession and the public from those who have not demonstrated minimum competency to practice law.”

“Even though the pandemic has created unprecedented challenges to this core responsibility of the Court and the Board, as well as unprecedented burdens on those taking the Bar Exam, the Court has determined the process set out in the April 28, 2020, order best balances that long-term responsibility and these short‑term burdens,” the court wrote.

‘Crank up the dread’

The weeks leading up to the bar exam are infamously demanding.

“On most days, I will study for probably eight hours. I take Saturdays off, but six-to-eight hours is the average study time for law students who are preparing for the bar with a bar prep course,” Quinn said.

COVID-19 had already prompted the same, abrupt transition to remote learning for law students that it did for almost everyone else. The loss of immediate access to professors, study groups, quiet places to study and libraries made the grind to graduation, and studying for the bar, arguably more difficult for the law school class of 2020 than any in recent memory.

“(Professors) really crank up the dread when it comes to talking about the bar exam and they do that to motivate you to study and take it seriously,” said St. Louis University School of Law graduate Brad Bilyeu. “But we already have all that angst and anxiety and then on top of it, throw in a pandemic.”

Some law school graduates are weighing the pros and cons of taking the exam versus holding off until February when the test is given again.

Quinn, who has chronic asthma, was granted accommodations for the exam by the board. However, with young children, one of whom also has asthma, and older parents, he decided the risk of taking the exam was still too great.

“Even with the accommodation, the reality of being around so many people and the spiking cases just made it so that it was not possible for me to take it and not put myself or my family at risk,” Quinn said.

Not to mention the financial implications for graduates who choose to postpone the test. Between rent and student loans, graduates are relying on the bar exam to get jobs as soon as possible. Taking the exam in February might leave a recent grad at a significant disadvantage.

Quinn is far from alone in having to balance health concerns against the financial imperatives. In impact statements submitted along with the letter to the Supreme Court, 22 graduates detailed the challenges they’re being forced to face.

“In a just system, no human would be required to make the choice between being able to make a living and being able to remain safe from serious illness or death when alternate options — such as diploma privilege — are available to us,” read one statement.

Then there’s the question of safety after the two days of the exam.

Bilyeu is hoping to find a place to quarantine after the exam to keep his family safe. But even that carries uncertainty.

Bilyeu said he and a few fellow students were looking for a short-term rental to split three ways.

“If we do get a place, that’s non-refundable, and then (the board) will actually do the right thing and cancel it, and we’re going to be out that money anyway.”

With so many variables and unknowns surrounding the Tuesday and Wednesday exam, law school graduates are again calling for leadership to consider other options.

“I would say by any balancing test at this point that if our rationale is to protect the public, which is what the rationale of the bar exam is, then we need to probably postpone that 400-person event,” Bilyeu said.

Assuming that the requests of outspoken graduates are not met, many want the powers that be to consider the grim reality test-takers are facing this week.

“I want an acknowledgement that we have to do something incredibly difficult on Tuesday and Wednesday,” said one MU law school graduate, who asked to remain anonymous due to concern about future job prospects.

“Something that the Supreme Court, Health Department, the Missouri Board of Law Examiners knows is incredibly risky and frightening. I would like them to acknowledge that they put their pride in the profession over the health of future attorneys and advocates.”

“I do have every confidence that [the board] thought about the graduates’ safety in their social distancing measures,” Lidsky, the law school dean, said.

“But the students are asking, and reasonably so, is it possible to do it safely at all?”