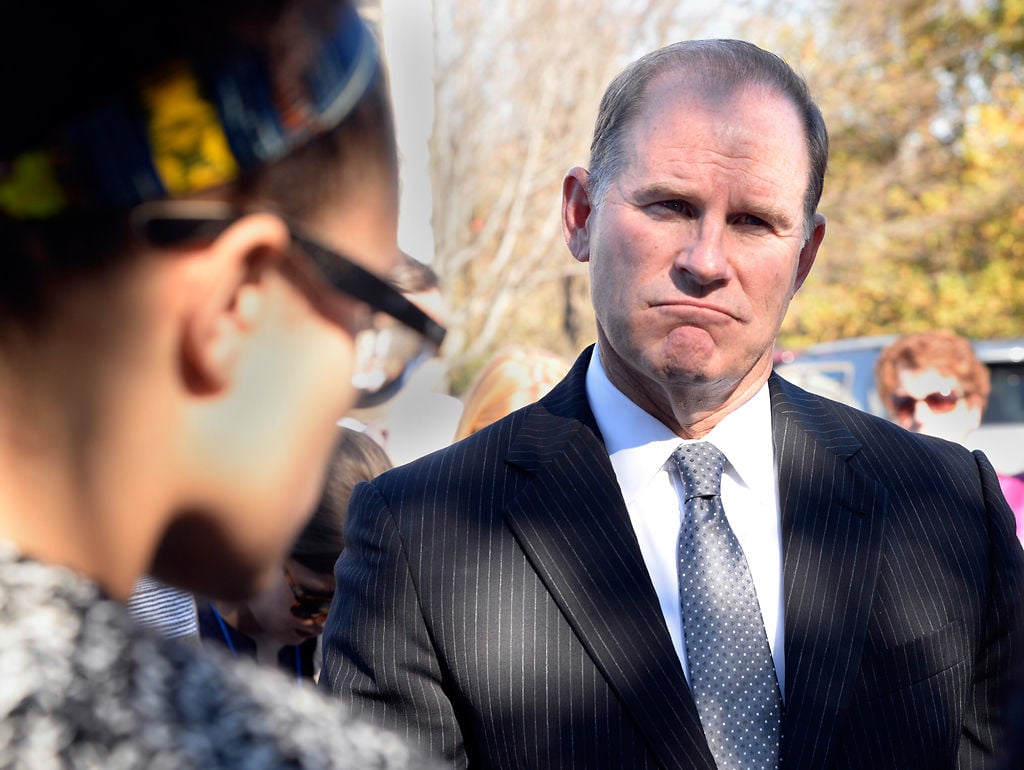 University of Missouri System President Tim Wolfe listens as MU student Abigail Hollis tells him that she wants him removed from his role as president on Tuesday in the parking lot at University Hall. 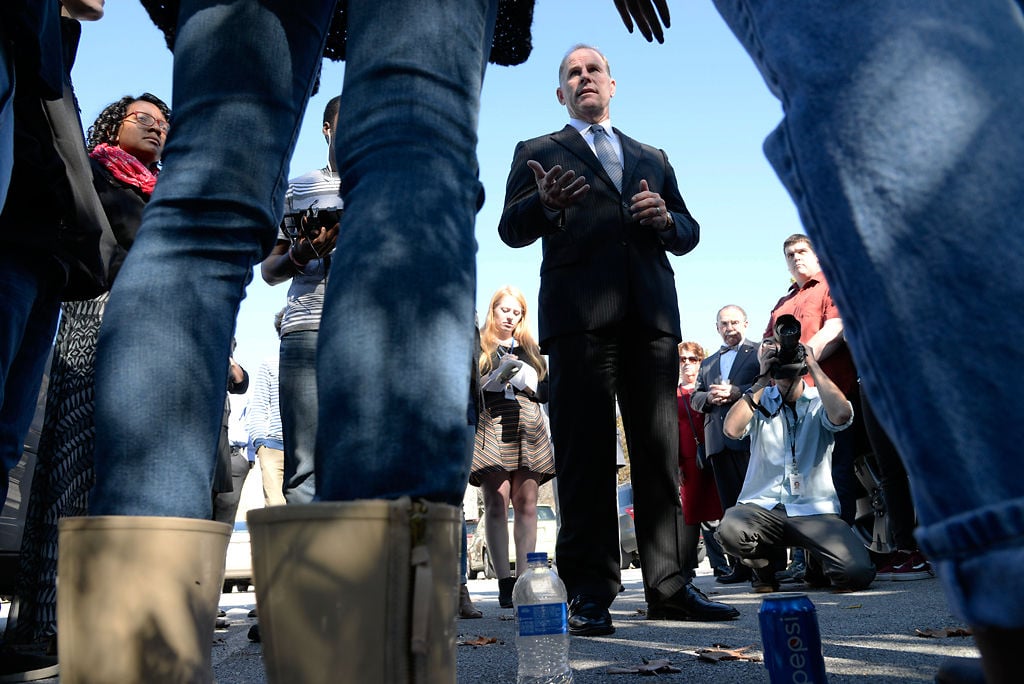 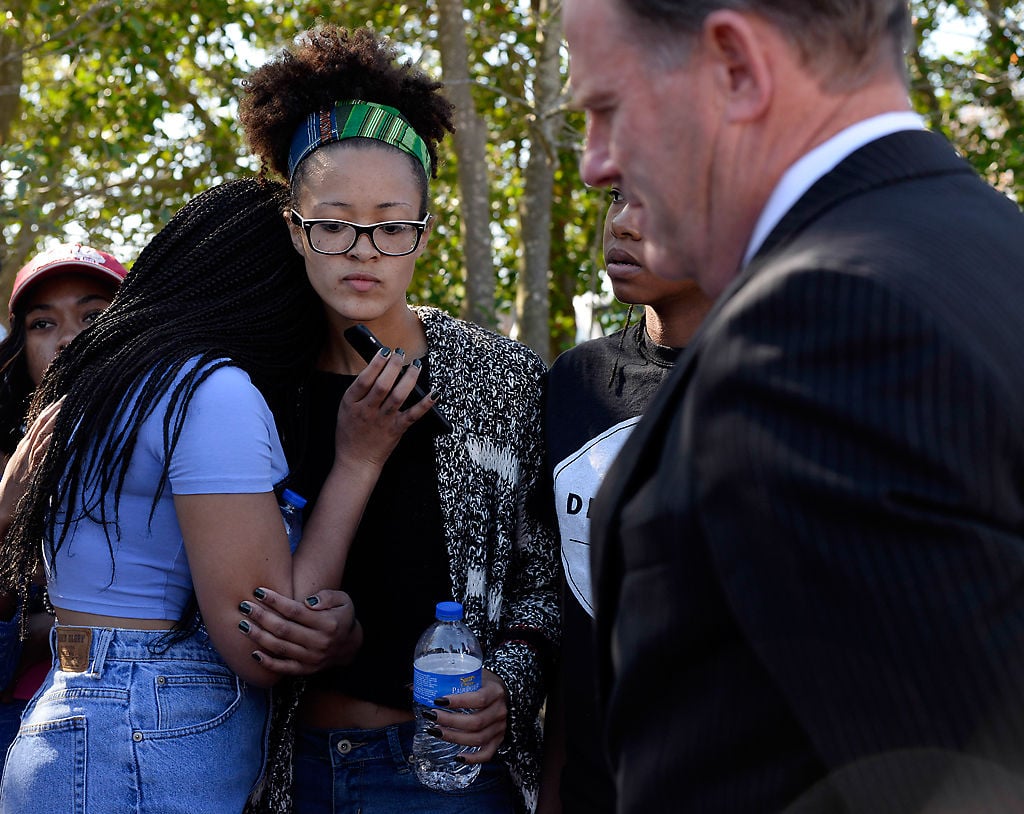 University of Missouri System President Tim Wolfe listens via speaker to a phone call from a fellow student of, from left, DeShaunya Ware and Shelbey Parnell on Tuesday in the parking lot at University Hall. Wolfe had to lean in to hear the phone call. 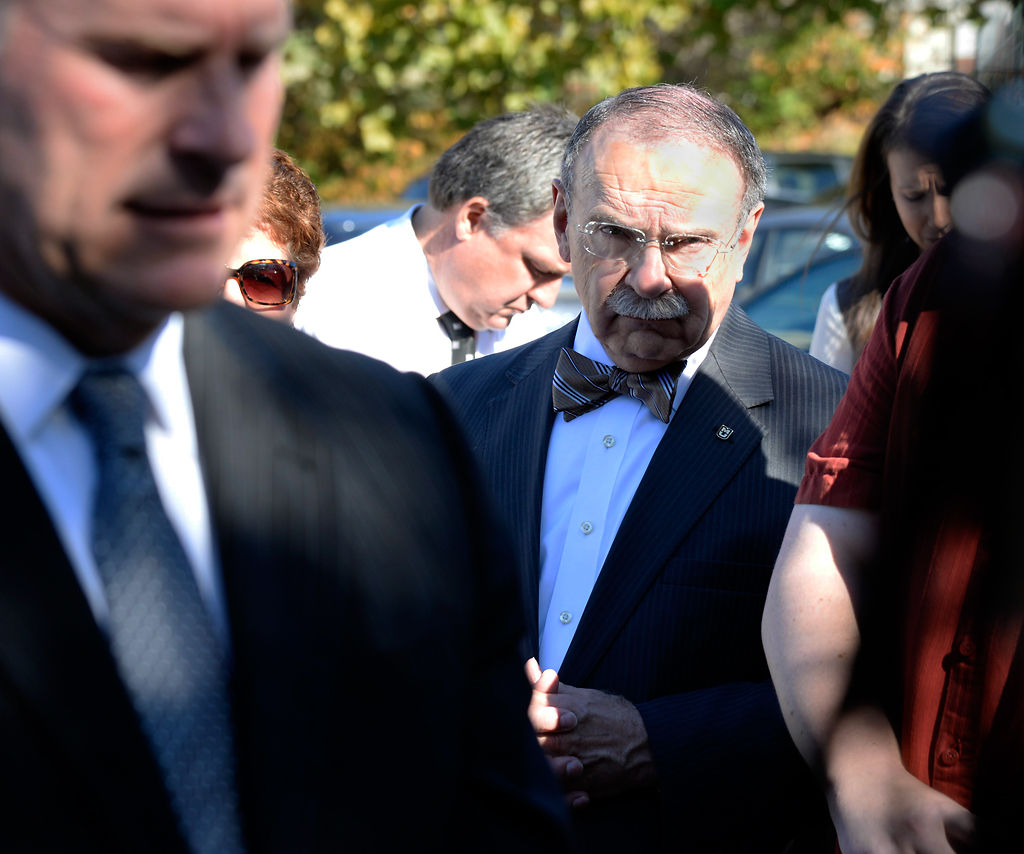 University of Missouri System President Tim Wolfe listens as MU student Abigail Hollis tells him that she wants him removed from his role as president on Tuesday in the parking lot at University Hall.

University of Missouri System President Tim Wolfe listens via speaker to a phone call from a fellow student of, from left, DeShaunya Ware and Shelbey Parnell on Tuesday in the parking lot at University Hall. Wolfe had to lean in to hear the phone call.

But the demonstration became contentious as the group challenged Wolfe while he spoke.

Wolfe told the few dozen students and others gathered in the parking lot of University Hall that he hoped to continue dialogue about racism with Butler and other students. The Forum on Graduate Rights called for the gathering, but when Wolfe attempted to turn attention to Loftin, members of student group Concerned Student 1950, who had joined the gathering, intervened.

“Actually, before we do that, that’s not why we’re here,” said DeShaunya Ware, an MU senior and Concerned Student 1950 member. “I’m not here for a press conference. I don’t want to talk to anybody. I want you to resign … You don’t care about racism. Racism doesn’t matter to you.”

Butler sent a letter to the UM System Board of Curators on Monday morning announcing he would not eat until Wolfe was removed from office. Butler's decision came three weeks after Concerned Student 1950 stopped Wolfe’s car during the Homecoming Parade and a week after the group met privately with Wolfe.

Tuesday’s demonstration began with a statement from the Forum on Graduate Rights.

“JB (Butler) is our colleague, our fellow activist and our friend,” said Eric Scott, co-chair of the Coalition of Graduate Workers, a part of the Forum on Graduate Rights, as he read the statement aloud to Wolfe and the crowd. “We want him to live a happy and healthy life, and you (Wolfe) have the power to resolve this, and we urge you to use it.”

Wolfe responded to the statement, saying he is also concerned by the incidents that have occurred at MU.

“Racism is unacceptable, it’s absolutely unacceptable, and we have to eliminate it,” Wolfe said. “By the way, it’s not one and done — it’s a continuous investment and issue that we have to be on for quite some time, so that’s my focus, that’s my commitment.”

Wolfe said that he reached out to Butler after he announced his hunger strike and that Wolfe will continue the conversation with students and administrators.

“My actions will support my words,” Wolfe said.

But student activists were not convinced.

“What actions?” a few responded.

The students continued to press Wolfe on what actions would be taken and persisted in demanding his resignation.

“We would suggest that you, if you’re serious about addressing this, that you schedule a meeting for the curators to talk to Jonathan,” said Connor Lewis, co-chair of the Coalition of Graduate Workers. “I think that would be a good signal that the university system is taking this seriously.”

“That’s fair. The Board of Curators would like to talk to Jonathan just as I would,” Wolfe said, but he did not promise a meeting.

John Fougere, UM System spokesman, then led the system president away from the crowd, saying Wolfe had to leave.

Although Loftin did not give a statement of his own, he stuck around to listen to graduate students and Concerned Students 1950. The group named itself after the year MU admitted its first black graduate student, Gus T. Ridgel.

After Wolfe left and students spoke among themselves, Lewis said it is problematic that Wolfe thinks the solution can be solved by consulting with inadequate administration and working with status quo at the university.

“He’s in a position, which he doesn’t seem to realize, of moral authority,” Lewis said.

He said Loftin has put himself personally into the issues and is encouraging open dialogue while Wolfe is delivering statements through administrators or his "PR handler" who takes him away from meetings when he doesn’t follow the narrative.

“So that’s not an indication of genuine engagement,” Lewis said. “That’s an indication of crisis management. It really makes me think that there is a problem with the University of Missouri System if he doesn’t seem to realize that.”

Some graduate students spoke with Loftin about the diversity training all incoming students will be required to complete.

Sarah Senff, a theater graduate student, said she wanted the training to be more personal instead of basic computer training. Loftin said some students he met with were not pleased either, and he was open to looking into a multi-pronged approach.

“I’m happy to have that conversation,” Loftin said to her. The chancellor and the students were friendly, thanking each other at the end of the conversation.

Aleksandra Kinlen, a second-year doctoral student in history, was at the demonstration to support MU students’ rights across the board.

Scott said the most important thing is that his friend, Butler, lives a long, happy, active life.

“So anything that brings this hunger strike to an end sooner is what I am in favor of,” Scott said. “Hopefully based on what we did here today, JB is going to get to meet with the curators and some kind of resolution can come of this.”

TELL US: How do you encounter racism? Some readers have said they don't think it's still a problem. What perspective would you offer?

After students read statements in support of Jonathan Butler, who is on a hunger strike, University of Missouri System President Tim Wolfe spoke, and students challenged him.