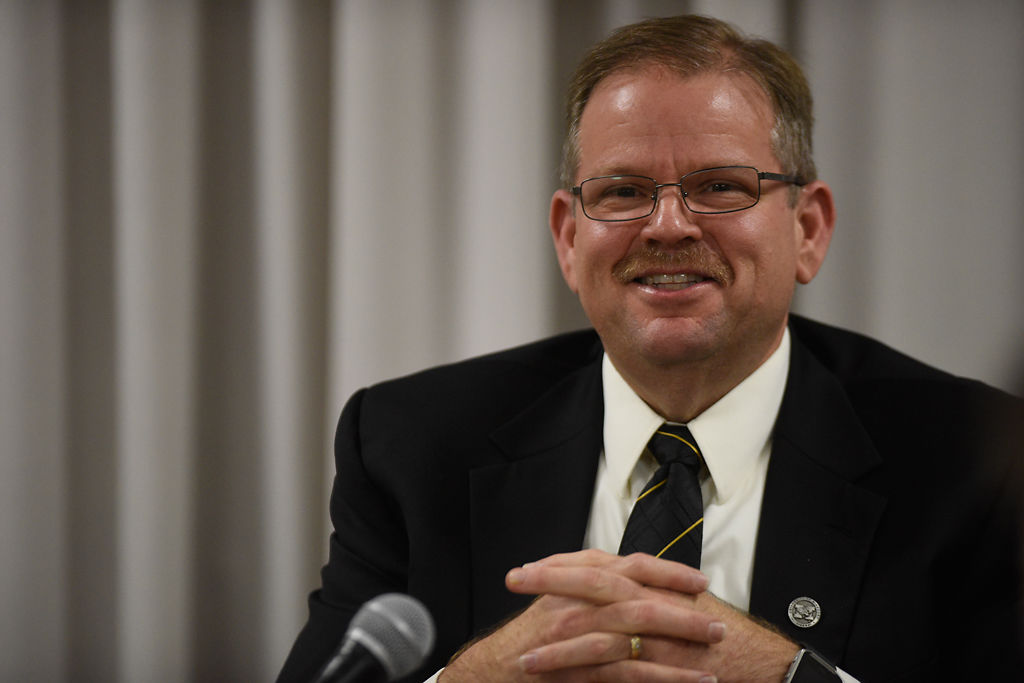 MU Chancellor Alexander Cartwright smiles as he addresses the media during a press conference at Jesse Hall Wednesday. During the conference, Cartwright took questions from various newspapers and discussed his future goals for MU. 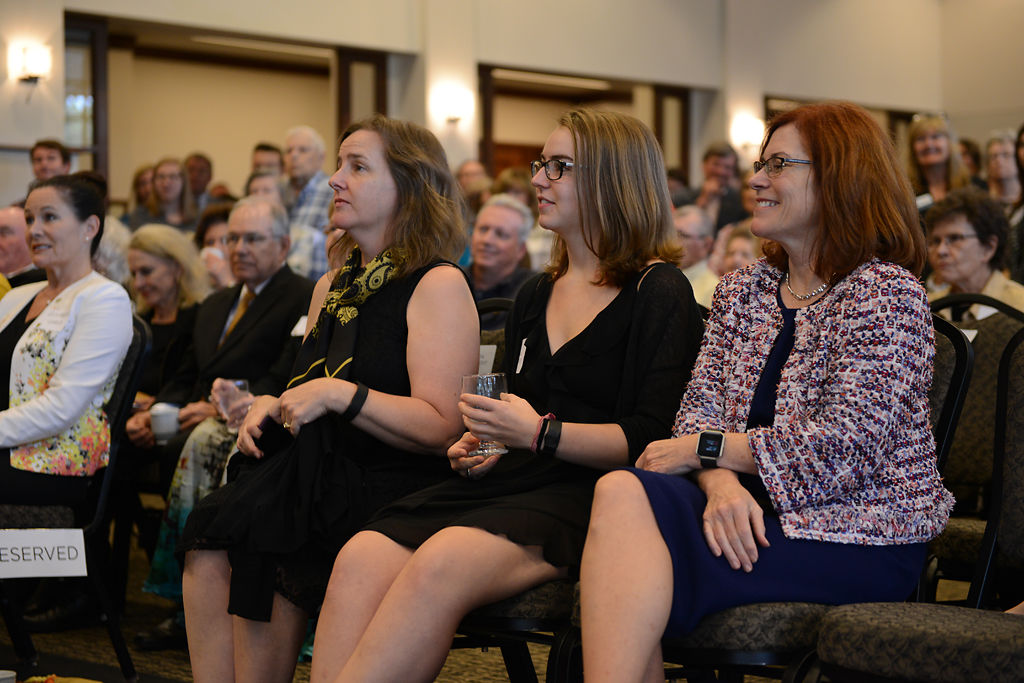 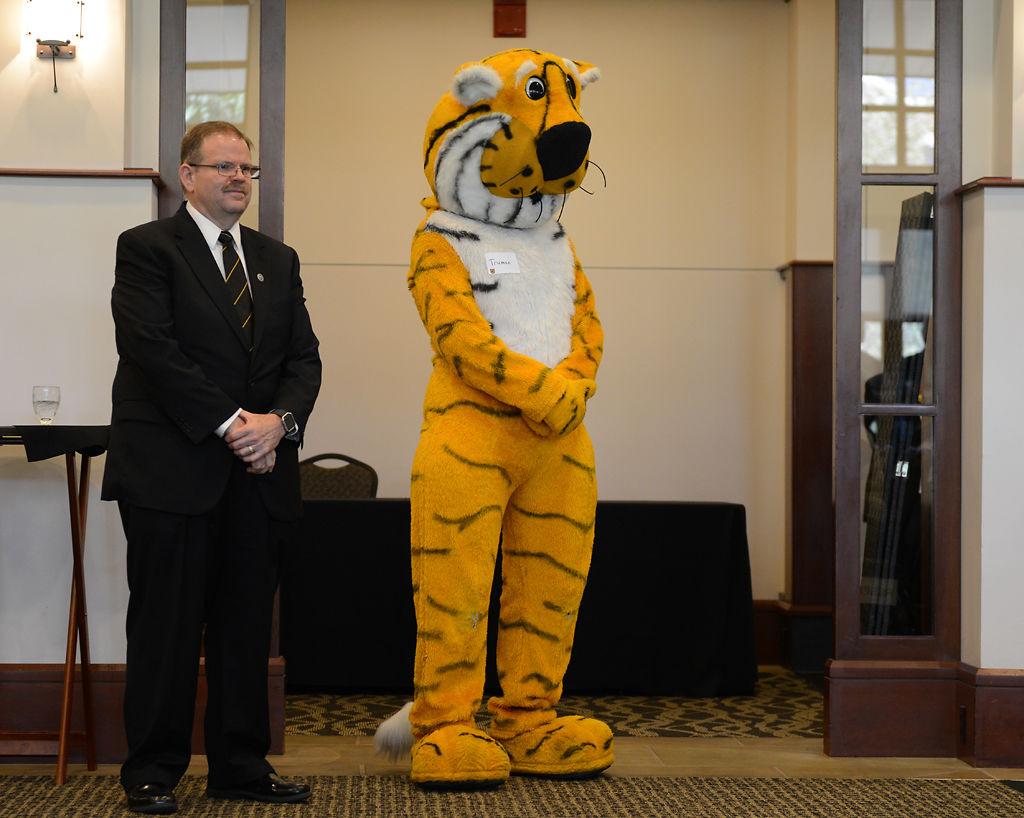 MU Chancellor Alexander Cartwright waits with Truman the Tiger before being introduced at his welcome reception on Wednesday at the Reynolds Alumni Center. He gave a speech outlining his life and his vision for MU's future. 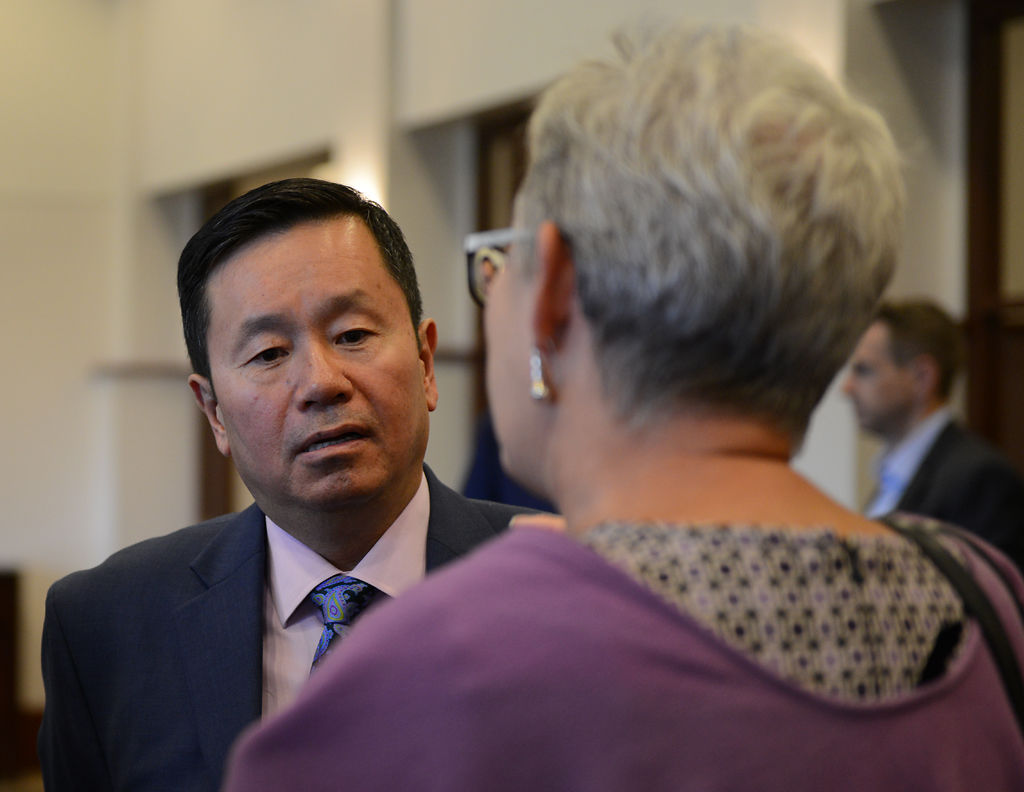 UM System President Mun Choi listens to Jatha Sadowski, director of human resource services, before MU Chancellor Alexander Cartwright gave a speech at his welcoming reception Wednesday at the Reynolds Alumni Center. Both Choi and Cartwright were inducted into their positions this year.

MU Chancellor Alexander Cartwright smiles as he addresses the media during a press conference at Jesse Hall Wednesday. During the conference, Cartwright took questions from various newspapers and discussed his future goals for MU.

MU Chancellor Alexander Cartwright waits with Truman the Tiger before being introduced at his welcome reception on Wednesday at the Reynolds Alumni Center. He gave a speech outlining his life and his vision for MU's future.

UM System President Mun Choi listens to Jatha Sadowski, director of human resource services, before MU Chancellor Alexander Cartwright gave a speech at his welcoming reception Wednesday at the Reynolds Alumni Center. Both Choi and Cartwright were inducted into their positions this year.

Alexander Cartwright, MU’s first permanent chancellor since late 2015, has high hopes for his new home: He wants MU to champion a new model of a land-grant institution.

In a Jesse Hall conference room, Cartwright answered questions from about 20 members of the news media for just over an hour. He repeatedly emphasized the need for enhanced engagement between MU and the state, and he called for a culture to be instilled where innovation, risk-taking and creativity can blossom. This combination of improved coordination between the school and its community and an emphasis on a successful academic culture was wrapped up by Cartwright in the term “New Land-Grant” institution.

Although MU is bleeding from its largest revenue streams, state funding and tuition, Cartwright said, “There is tremendous opportunity for us, as a comprehensive, land-grant, AAU institution, to address grand challenges of Missouri and grand challenges of society, and that is something that is unique to an institution like this.”

Of the 62 members in the Association of American Universities, an invitation-only club of research universities, only 18, including MU, are land-grant institutions. These are schools created from the Morrill Acts of 1862, 1890 and 1994, and their shared goal is to provide education for members of the working class across the country, according to the Association of Public Land-Grant Universities’ website.

Universities across the countries used to be ivory towers, Cartwright said, where knowledge was gathered and hoarded by only those who could afford to attend. Although much less prevalent than it once was, that mentality persists. Cartwright wants it completely erased.

“We will not have distinctions between the walls of the university and the community,” he said.

He wants the school to be “porous,” where members of the community come in and students and faculty from the school go out. His hope is that research done at MU will be shared with Missouri communities and directly affect the lives of state residents. The goal is to improve the extension and engagement opportunities offered by MU for Missourians, he said.

MU can begin to accomplish this by removing barriers to creativity and innovation for the school’s researchers and providing them with the resources and encouragement they need to turn their great ideas into a reality, he said.

Cartwright, whose degrees were in electrical engineering, said the most helpful class in his academic career wasn’t an engineering or a mathematics course — it was rhetoric, he said. Learning how to better mold arguments helped him win funding throughout his career because he was able to draft proposals clearly highlighting his good ideas. There are countless people at MU and across the country who have great ideas, Cartwright said, but for those ideas to become a reality, the researchers need to be able to express themselves in a proposal. Campus leadership could provide help with proposals.

MU could also help by removing other barriers, he said, such as easing the administrative burden placed on researchers. Cartwright estimated that as much as 40 percent of a researcher’s time is spent ensuring compliance with restrictive university policies. Those rules are far too cumbersome, he said. By placing unneeded restraints on researchers, MU is taking away time to focus on their projects and, as as result, losing out on valuable innovation.

MU is working to raise faculty members’ salaries, Cartwright said, because they are not competitive with peer institutions. Even though there are budget cuts to every division and department of the school, it is vital to raise faculty salaries for MU to retain the top-tier talent it has, he said.

One example of how MU is demolishing walls separating schools from their communities, Cartwright said, is with the Missouri Land Grant Compact. Announced Aug. 24, the compact provides grants that will cover tuition and fees for thousands of low-income Missouri residents starting next fall. Funding for the grants draws from money freed up by strategic budgetary cuts this summer and funds already being spent on need-based financial aid. If more students than expected are eligible for the compact’s grants, then MU will need to locate additional funding, Cartwright said. If this happens, he’s confident the school will be able to fundraise enough. MU plans for the program to continue indefinitely, he said.

Both Cartwright and University of Missouri System President Mun Choi are engineers and have each hammered home the importance of research to MU’s status as an AAU, Research I institution, but Cartwright on Wednesday also spoke to the importance of MU’s humanities and liberal arts programs.

“I’ve talked quite often about technologies and the advances of technologies, but it isn’t technology that defines who we are. It’s the cultures,” he said. “We connect because of all the things that have to do with art or music or the humanities. We connect with people, and it’s those things that define us as people.”

Cartwright said that in the face of an ongoing review of the school’s academic programs, he is committed wholeheartedly to the humanities programs at MU. His children are musicians and that has made a tremendous impact on their lives, he said, and if he had the opportunity to go back in his life, he would learn to play an instrument.

He said humanities and liberal arts degrees are extremely important to the school and noted that even if humanities or liberal arts graduates may not make as much money initially upon graduation, the degrees are of comparable value to any other in the long run.

“We have to rethink what it means to get a degree and what a degree means,” Cartwright said. “Return on investment means, ‘How effectively have we educated our students to understand that they need to continue to learn throughout their entire lives?’ If we can teach that and have people understand that you can’t just be stagnant in your education — you can’t just think that you get a four-year degree and then that’s it, forever — then I think we’ve done our job.”

Cartwright articulated the importance of athletics to the well-being of a university.

“We need to be thinking about how we use that as both a way to enrich the student experience here and to also enrich the identification of people with the institution,” he said. Athletics are a tremendous opportunity to foster connection between students or alumni and their school, he said, and seeing MU on national television is a great way to build engagement. He also pointed out that the athletics department almost entirely pays for itself.

“I actually really like working with Jim,” he said. “I think he has a view of what athletics is and what it should be that is well aligned with my view.”

Asked by a reporter how he would respond if football players were to strike again, Cartwright declined to speculate. He said he hoped to deescalate any such issue before it got to the point of a protest. He said that any future situation would be different than the past, that he didn’t want to reflect on decisions others made and that he would know what to do if it ever happens. He said the situation is like solving an engineering problem, where the constraints of any issue are unique, so he wouldn’t want to speculate unless he knew the exact nature of the situation.

Alexander Cartwright is the first permanent MU chancellor since 2015.