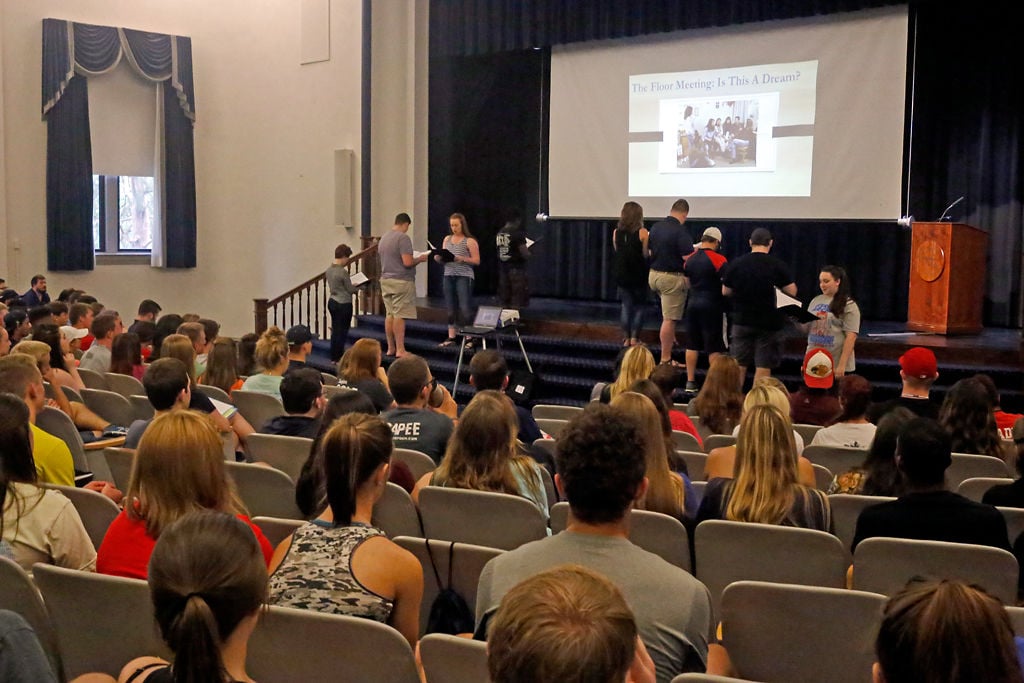 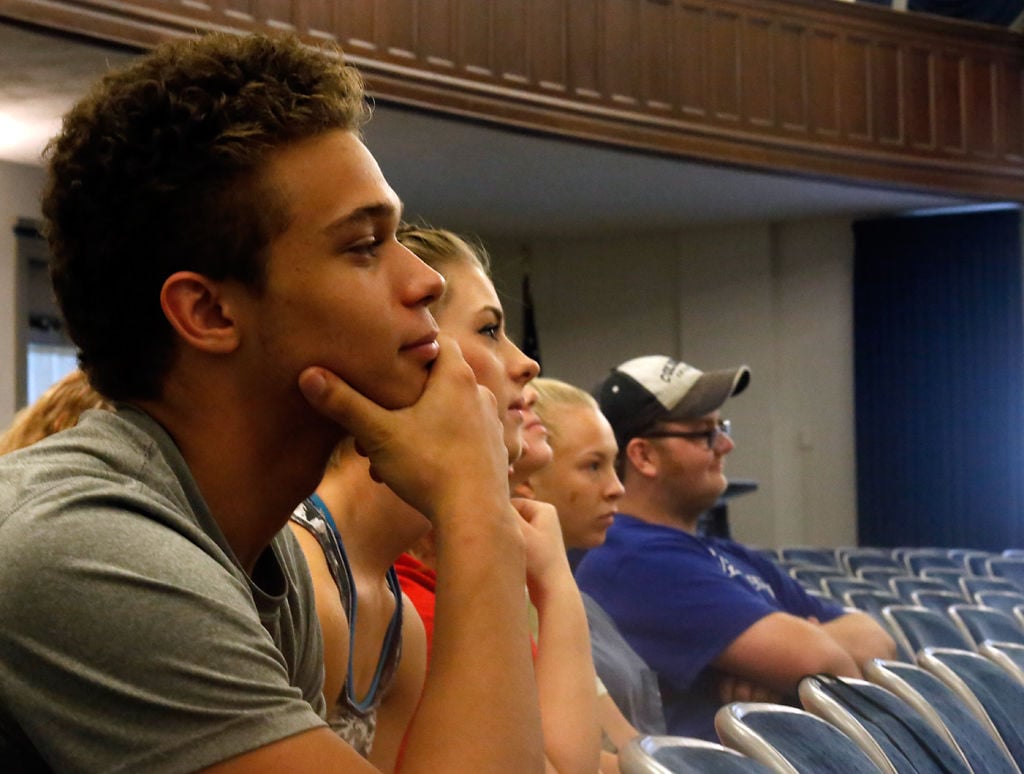 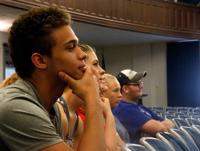 Columbia College freshman Darahn Sparks listens to a set of skits Friday at Launer Auditorium. Incoming freshmen were invited to campus to learn about the campus' aim to promote the safety of their students and were then able to engage in small group discussion. 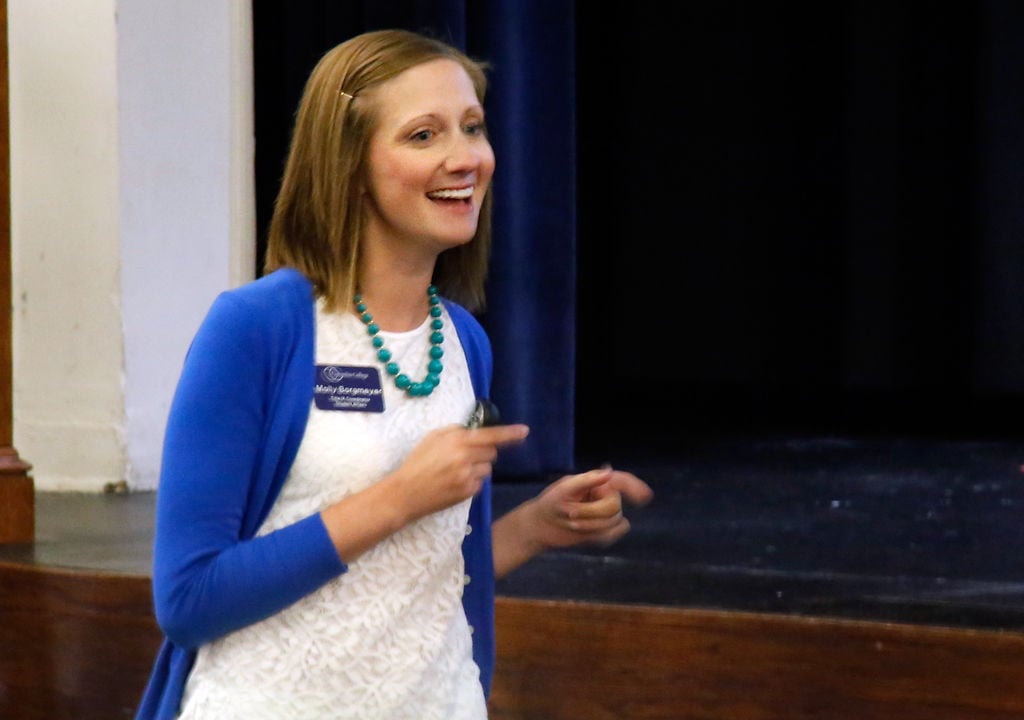 Columbia College freshman Darahn Sparks listens to a set of skits Friday at Launer Auditorium. Incoming freshmen were invited to campus to learn about the campus' aim to promote the safety of their students and were then able to engage in small group discussion.

COLUMBIA — Three college buddies were leaving a party. One volunteered to drive — but he was drunk, and the subsequent car crash killed his two friends.

That was one of several student-led scenarios presented as part of an orientation Friday for students new to Columbia College. "Choices," put on by the Elysium Players, Columbia College's drama club, walked about 100 freshmen and transfer students in Launer Auditorium through situations they might encounter as college students. Other skit topics included sexual misconduct, day-to-day conflicts and sexual consent.

After the skits, students were introduced to Step UP!, a bystander intervention program in its first year at Columbia College. The national program was put together at the University of Arizona in conjunction with the NCAA, said Molly Borgmeyer, the college's Title IX coordinator. The program applies not only to dangerous situations such as drunken driving and sexual assault but also everyday conflicts.

"We liked that for our campus because it covered a lot of ground," Borgmeyer said. "My main goal is to create a safe and caring campus community.”

The program aims to educate students on how to intervene when the situation demands it. It suggests following five steps in deciding whether to intervene:

Although it is the first year for Step UP! training, it is the third year Columbia College has provided a Title IX presentation. Title IX protects people from discrimination based on sex in education programs or activities that receive federal financial assistance, according to the U.S. Department of Education website.

The college's Title IX Office and the Prevention Coalition hosted the orientation.

"I've seen a lot of similar things, but this presentation wasn't PG," freshman Taylor Stewart said. "It was an adult conversation. We weren’t being talked at — we were being talked to."

In the University of Missouri System, new undergraduates and graduate students are required to complete Not Anymore training. According to MU's Office for Civil Rights & Title IX website, the training is video-based and reviews topics such as sexual assault, consent, dating and domestic violence, stalking, and bystander intervention. Students need to get at least a 70 percent on a test to complete the program, although the test can be retaken.

At MU, the Relationship and Sexual Violence Prevention Center uses the Green Dot program, an approach to violence prevention that includes bystander intervention.

The Step UP! program provides training for facilitators, as well as presentation materials available online. Borgmeyer and about five others at Columbia College are trained facilitators.

"We set up this program to increase awareness but also to enlighten people that they can make a difference," Borgmeyer said. "It's not only up to administrators to do that."

After learning how to "step up," the students broke into small groups to discuss the skit topics and bystander intervention in greater detail.

"We all had basically the same responses to the scenarios, which gives me a lot of faith in their character and reinforces my decision to come to Columbia College," freshman Maddie King said.

Choices from Columbia Missourian on Vimeo.