A previous version of this story incorrectly listed a master's program as recommended for further review.

Dozens of MU programs found to be under-enrolled or underachieving were recommended for closure, further review or combination by the Academic Programs Task Force.

The report released Thursday is part of a larger process, Chancellor Alexander Cartwright said Tuesday, and final decisions will be made throughout the spring semester. Students in affected programs will be able to finish their degrees.

The School of Medicine already had been looking to consolidate five Ph.D. programs into a single interdisciplinary degree, which were listed in the report as well: Biochemistry, Medical Pharmacology and Physiology, Molecular Microbiology and Immunology, Nutrition and Pathobiology.

The report lists 16 programs where “significant concerns were identified” that should be addressed.

The report lists four examples of combinations the task force thinks would be effective, but cautions that data were lacking in some cases and administration should weigh the pros and cons.

Birth of the academic review

The review process was initiated in early April when UM System President Mun Choi, in response to a budget crisis created by downward spirals in enrollment and state funding, sent a system-wide email calling for an 8 to 12 percent budget cut and a top-to-bottom review of how the schools conducted themselves.

Another piece of that puzzle was a report issued by accounting firm PriceWaterhouseCoopers at a December curators meeting that identified between $44 million and $74 million in budget cuts for the system.

The task force was created in early August with Cooper Drury, Arts & Science associate dean, and Matthew Martens, professor and provost office faculty fellow, at the helm. The team has met biweekly since then in multi-hour sessions.

Jim Spain, who will take over as interim provost when Garnett Stokes departs next week to lead the University of New Mexico, will meet with deans of affected programs over this semester and look at more data, and then will issue his recommendations to Cartwright. From there, Cartwright will present to Choi and the UM System Board of Curators.

Spain was initially a member of the task force but recused himself when he accepted the position as interim provost.

Cartwright said he hopes for final decisions to be made by the end of this semester, for both graduate and undergraduate programs. This is an aggressive timeline, Cartwright said.

The task force examined data from the student census, Missouri Department of Higher Education; the National Study of Instructional Costs and Productivity, known as the “Delaware Data”; and others. The team also met 39 times with members of the campus community, including faculty, staff, administration and students.

But some questions were raised regarding final decisions made and the process used to make them.

“It’s a difficult decision because you have to look at the data,” Cartwright said. “But the data doesn’t tell you everything always.”

Over the summer, the Department of Ancient Mediterranean Studies was created combining the Classical Studies faculty with several Archaeology faculty members. The closure of the graduate programs for those two programs is recommended in the report.

The rationale in the report for the closure of the Art History and Archaeology and Classical Studies programs includes small number of graduates per year, high number of years to degree for Ph.D. students and low research productivity compared to peer institutions.

“Some of the specifics connected with our new department got lost in the shuffle,” said Anatole Mori, chair of Ancient Mediterranean Studies.

The recommendation is based on outdated data, Mori said, and the department anticipated some of the task force’s concerns, of which some already have been addressed.

Ancient Mediterranean Studies has received nearly twice the applicants this year than last, Mori said, and research productivity would be badly damaged by the elimination of the graduate program. Faculty in the department, especially archaeology, rely on graduate students to conduct their research, Mori said. For instance, the department works with the Gabii Project, an international collective effort with the dual goal of excavation and study of an ancient Roman city-state, and MU participation relies heavily on graduate students.

Another factor that should be considered, Mori said, is the history of the department. Classical Studies is a legacy program for MU — it traces its roots to the mid-1800s, not long after MU’s founding in 1839.

MU, as a land grant university created by the Morrill Act of 1862, also has a specific mission to teach “agriculture, military tactics, and the mechanic arts as well as classical studies,” according to the Association of Public Land Grant Universities.

“We recognize that there might be information that we don’t have or that the task force didn’t have,” Cartwright said. “We are giving opportunities for deans to come forward and to say, ‘Here’s what we know about this particular program, and you may not have this information or that information.’”

Mori said she already has spoken to the dean of Arts & Science to advocate for her department.

There’s a trend across all of higher education to be more data-driven in decision-making, Cartwright said, but MU data are not available that are complex enough to answer every question.

The report highlighted data as a problem for MU: “The activities of the Task Force illustrated the significant problem MU has in terms of data storage and organization.”

The report goes on to say that data across campus are not stored centrally or consistently defined.

“Many institutions are struggling with these same types of challenges,” Cartwright said.

“By going through this process, we started asking questions that weren’t necessarily asked before,” Cartwright said, “and they may have started thinking of certain things they wanted an answer to and we didn’t have that data readily available.”

“Am I happy with where we are?” Cartwright asked. “No. We need to have much better data systems.”

“We did good work within the time constraints and data that we had,” said Nicole Monnier, an MU faculty and task force member. She expressed concerns, echoing those in the report, about how MU collects, organizes and shares its data.

The only decisions released by the task force were those supported by the data it had access to, Monnier said, but it’s certainly possible there may be more data that would change minds. She emphasized that the task force’s decisions are merely recommendations, and it’ll be the job of Interim Provost Spain to take a deeper look and make final decisions.

The task force also was charged with identifying particularly strong academic programs worthy of further investment. The report says this was difficult because, when the team held meetings, the perception was that the team was only looking for areas to cut. As a result, questions and suggestions from constituents were mainly focused on that.

But there were some areas the task force recommended increased investment:

“We have to narrow our focus to programs of excellence,” Spain said. 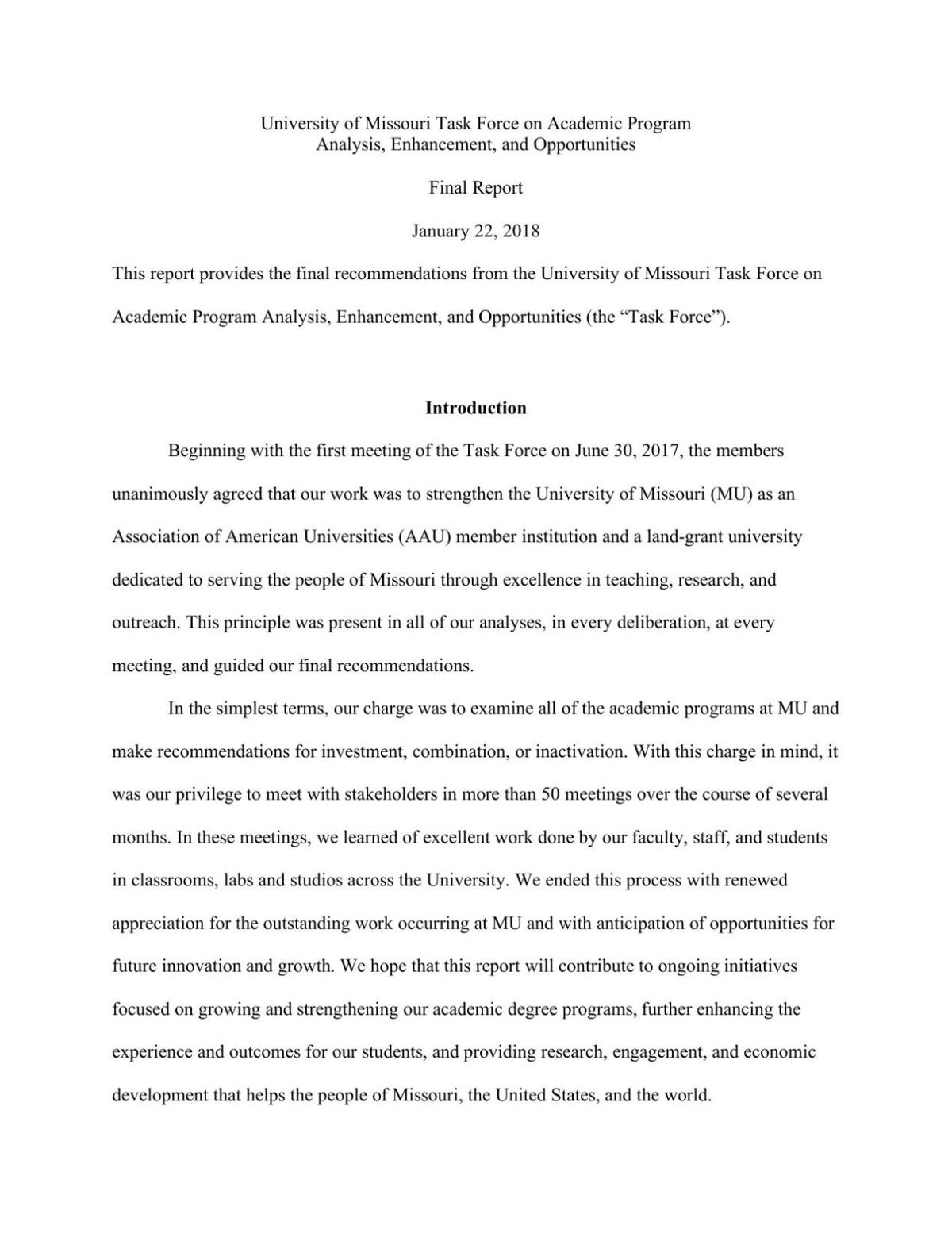 MU is in the process of reviewing a number of programs considered to be underperforming, then will figure out which ones to cut.