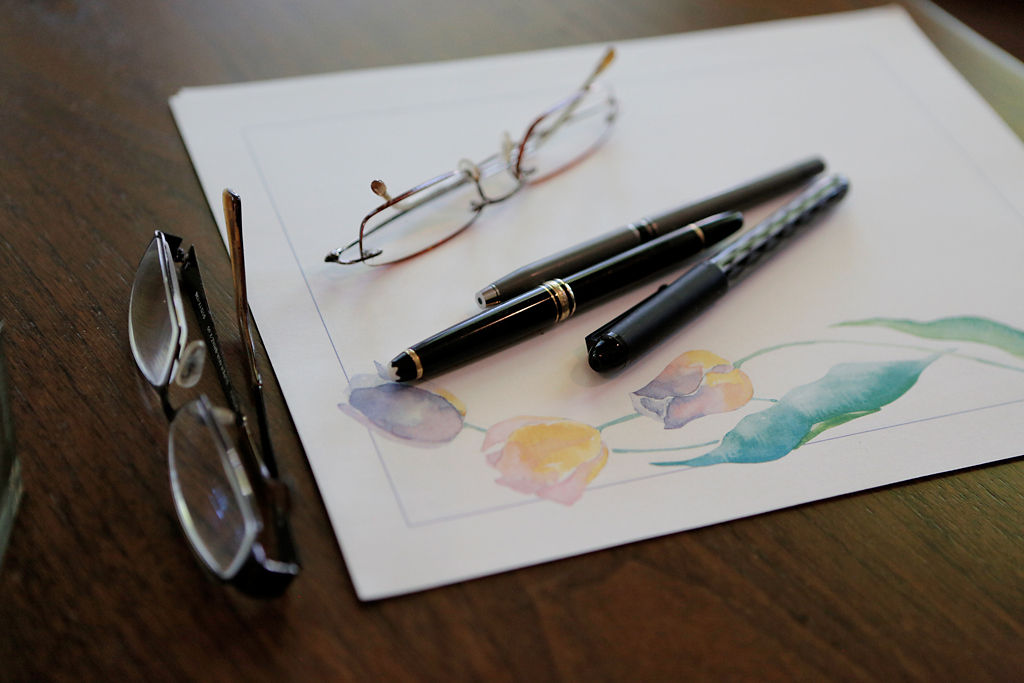 Writing utensils lay on a desk in the home office of MU professor Marty Townsend on Wednesday. Townsend, an adamant believer in the art of letter writing, enjoys writing in her home study. 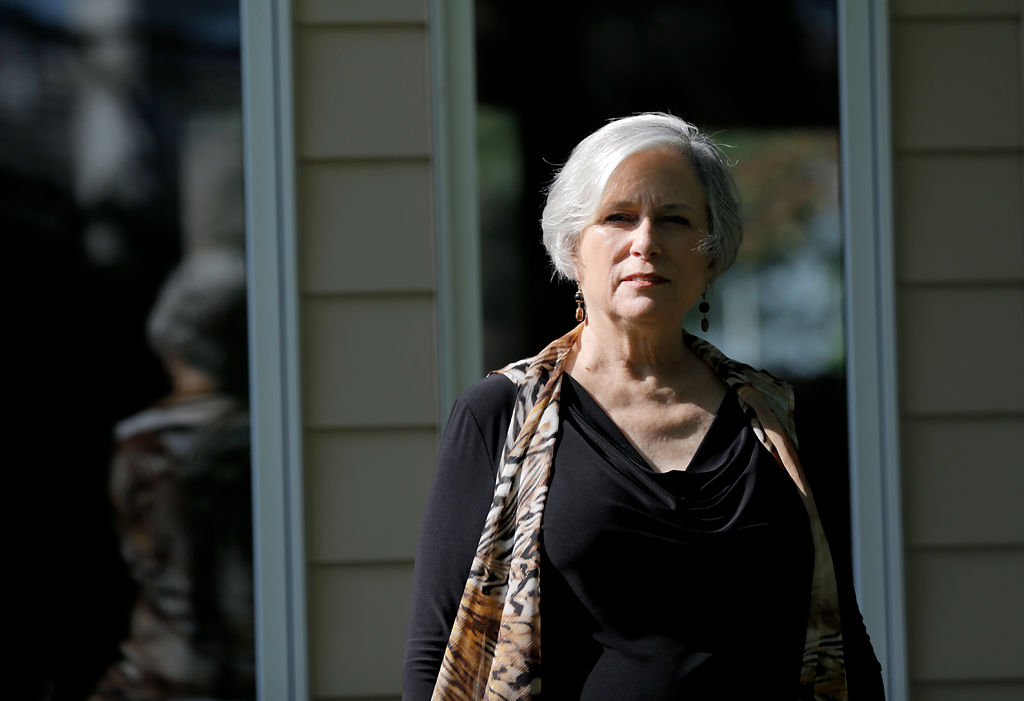 MU professor Marty Townsend poses for a portrait on Wednesday outside her Columbia home. She taught a course called Letter as Genre that focused on the art of letter writing. 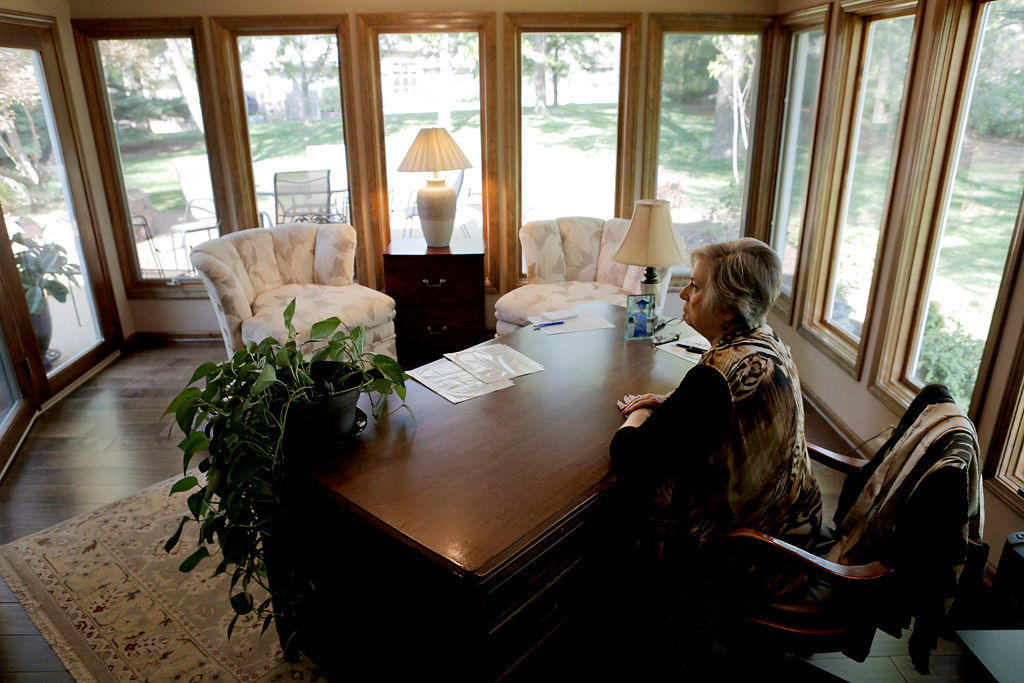 MU professor Marty Townsend sits in her home study, where she enjoys writing letters most, on Wednesday. Townsend was inspired to start the Letter as Genre class she taught last semester after reading an article about the death of the art of letter writing.

Writing utensils lay on a desk in the home office of MU professor Marty Townsend on Wednesday. Townsend, an adamant believer in the art of letter writing, enjoys writing in her home study.

MU professor Marty Townsend poses for a portrait on Wednesday outside her Columbia home. She taught a course called Letter as Genre that focused on the art of letter writing.

MU professor Marty Townsend sits in her home study, where she enjoys writing letters most, on Wednesday. Townsend was inspired to start the Letter as Genre class she taught last semester after reading an article about the death of the art of letter writing.

COLUMBIA — A phone call is quick. An email is quicker. A text message gets the job done in seconds.

Having to wait to hear from someone today is pretty much a lost sensation, given the near-constant availability on social media.

But Marty Townsend, an English professor at MU, teaches a course challenging all that.

Last fall, Townsend received a grant from the MU Campus Writing Program to teach The Letter as Genre, a look at writing letters from both literary and social perspectives.

Students studied different kinds of letters, including correspondence written in the Middle Ages and letters from Martin Luther King Jr. They pored over letters from politicians and soldiers, friends and lovers. The students read the love letters from John and Abigail Adams, Warren G. Harding, Virginia Woolf and others.

"We spent a week on the serious and sincere love letters, and also on the salacious, never-meant-to-see-the-light-of-day love letters," Townsend said. "Both were very intriguing."

The class also read letters from Boone County soldiers during the Civil War and visited the National Churchill Museum in Fulton to see a traveling Smithsonian exhibit called "Mail Call." It featured letters between soldiers and their families that spanned several wars.

In addition to studying letters, students formed teams to conduct research on the future of letter writing and presented it to the class at the end of the semester. On the last day of class, the students wrote letters to each other.

Some of the results from their projects were so good, Townsend said, that they’re being compiled in a collection the class will publish.

Townsend said she was inspired to teach letter writing after reading an article declaring that it was dead. The 2013 piece in The New York Times, "The Death of Letter Writing," prompted her to examine what the author proclaimed a dying art form. She began to wonder what today's college students would have to say about it.

"That one column was the premise for the entire course," she said. "Getting students thinking on this topic was my whole aim."

The New York Times piece by Mason Currey meditated on the loss of letters in relation to the process of creative writing. Ernest Hemingway, Currey noted, "turned to his letters when his fiction wasn’t going well; they were a welcome break from what he called the 'awful responsibility of writing.'"

Newsweek addressed the same issue a few years ago, remarking upon the importance of letters in documenting historical events: "The decline in letter writing constitutes a cultural shift so vast that in the future, historians may divide time, not between B.C. and A.D., but between the eras when people wrote letters and when they did not. Historians depend on the written record."

Townsend said the students in her class seemed to gain new appreciation of writing letters, both for recording history and preserving relationships.

"I think their perspectives all grew," she said. "They enlarged substantially what they know about letters and the importance of letter writing."

Among the letters they studied were the poignant and meaningful ones from soldiers  far from home during wartime.

"They are so filled with emotion and intriguing for what they don’t say," Townsend said.

Soldiers don’t write letters home telling their loved ones how difficult their lives are and how horrible war is, she said.

"They write home very neutrally to reassure their families that they’re OK," she said, "and that they will come home and that everything is acceptable.”

During the semester, many of the students adopted a practice of regular correspondence themselves.

"Several of the students in the class began to write letters to special people in their lives," Townsend said.

One reported in her end-of-term evaluation that her Christmas gift to family members was a handwritten letter to each of them.

Another student, Kelsey Hurwitz, began a letter-writing relationship with her mother in California.

"We just read so many letters and we read so much about them, I just figured I should be writing my own," Hurwitz said. "If I really believed in the impact that letters have, I should incorporate that into my own life."

She and her mother now write to each other two to three times a week.

"I love every letter," said her mother, Robin Hurwitz. "I love re-reading them, and they’re right by my desk. Getting the letters from her is the highlight of my day."

"I think it’s more personal," she said. "I’ll go down when I’m going to go to lunch and open my mailbox, and I’ll have a letter, and I’ll take it to a dining hall and eat, and it feels more like having my mom with me than it would if I were sitting there texting her instead of reading a letter."

"We talk on the phone. We Facebook. We email. So it’s not like we don’t communicate, but I think we write to each other in a letter differently than we communicate electronically," she said. "I think I save things for letters."

The past in letters

Townsend said her interest in letter writing began while she was growing up in a small town in Illinois.

"When I was growing up, we didn’t have email, we didn’t have text messages. If we wanted to communicate with a friend in another place, we wrote a letter," she said. “Telephoning long distance was expensive. Of course we wrote letters.”

Her father, the Rev. Henry F. Neal, was a Lutheran minister in Hebron, a town near the Wisconsin border in eastern Illinois. As she began looking for material for her class, she stumbled upon a letter in her father's archives dated May 24, 1964.

The author was a friend of her father's, a Presbyterian minister from Hebron named Robert Beech. Beech had gone to Mississippi to help register black voters, and he wrote to Townsend's father about it.

"His friend was very much a part of the civil rights wave of action that was going on in the deep South," she said.

She was thrilled to be able to use the letter in her class.

"For me to be able to use a letter, a piece of paper that was 50 years old, from among my father's belongings, was extraordinary to me," she said.

She laments that her own letter-writing practice is not steady enough. She writes more rarely than she'd like to admit, she said.

"I always write handwritten thank-you notes for gifts that I receive from people," she said. "But is a thank-you note a letter? That’s one of the questions we asked."

Her take after teaching the class is that writing letters can be revived and even treasured. "Because we still have this very basic human need to connect with other people in a way that electronic communication just doesn’t let us have.”

Townsend said she's doing her part to ensure that the practice doesn't disappear.

"It’s not lost if somebody’s doing it," she said.

For Robin Hurwitz, sending a child to college halfway across the country was bittersweet, but Townsend's class helped bridge the gap.

"Because this woman took the time to share something she’s interested in," Hurwitz said, "we both became more passionate about it, and we both communicate on a whole other level."