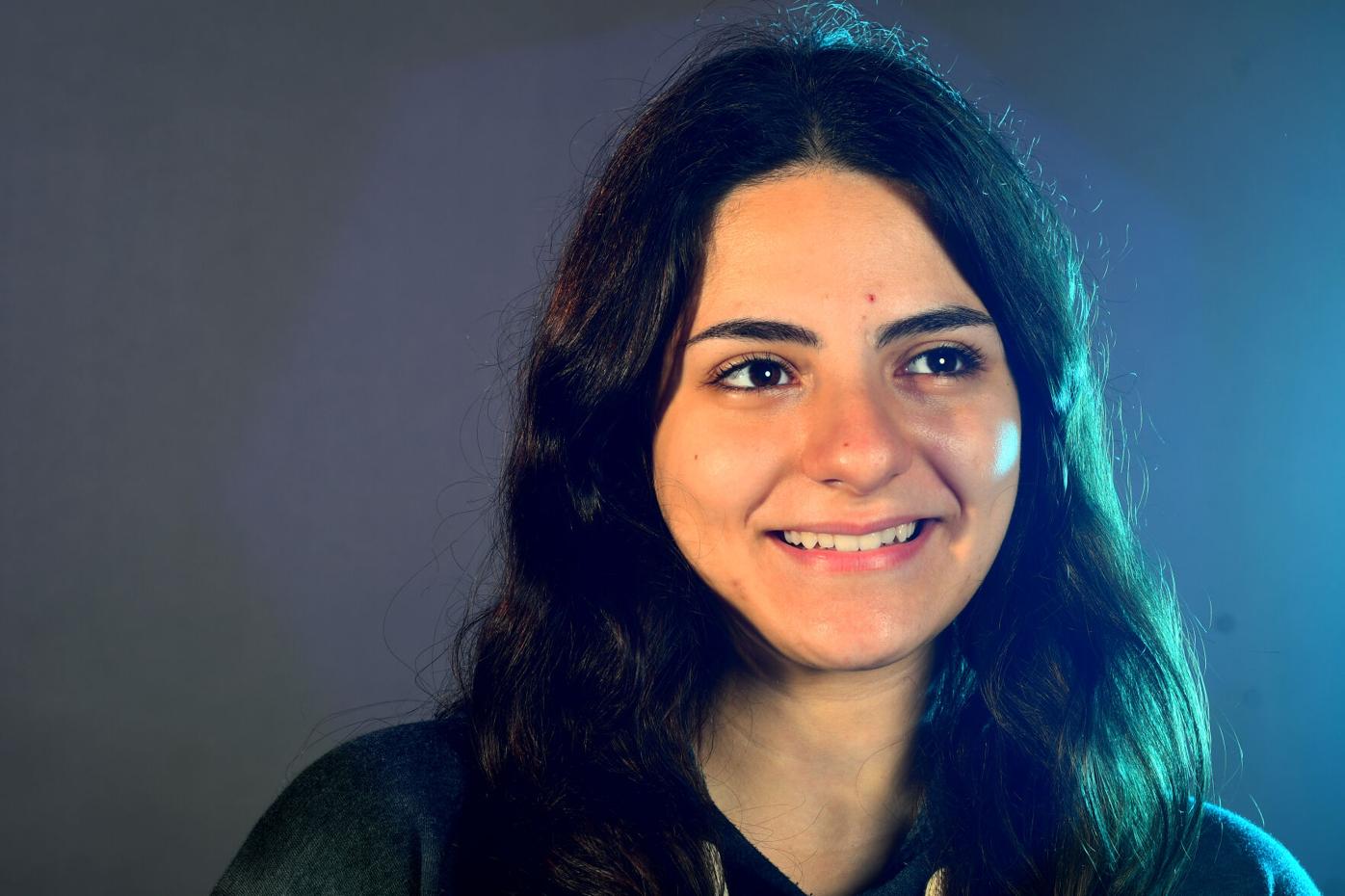 Fatima Almansouri’s inspiration is her sister, Eve, who underwent heart surgery. The biology major wants to be a pediatrician, part of the community that helped her sister. 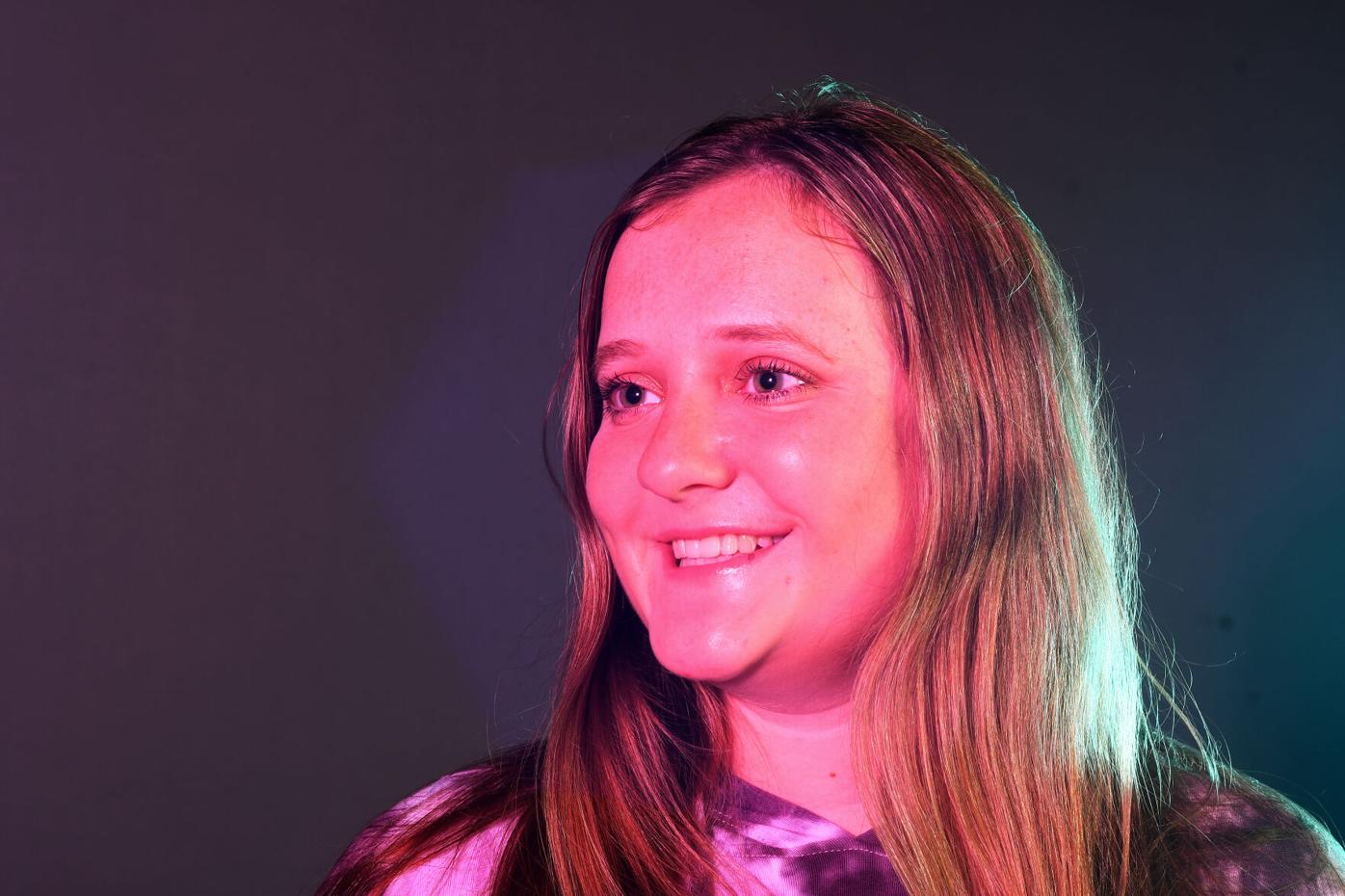 Hailee Coleman reads research about joint disease and ACL degeneration differently: She has undergone a lot of physical therapy since injuring her knee sliding into homeplate. The double major in biology and psychology strives to be an orthopedic physician. 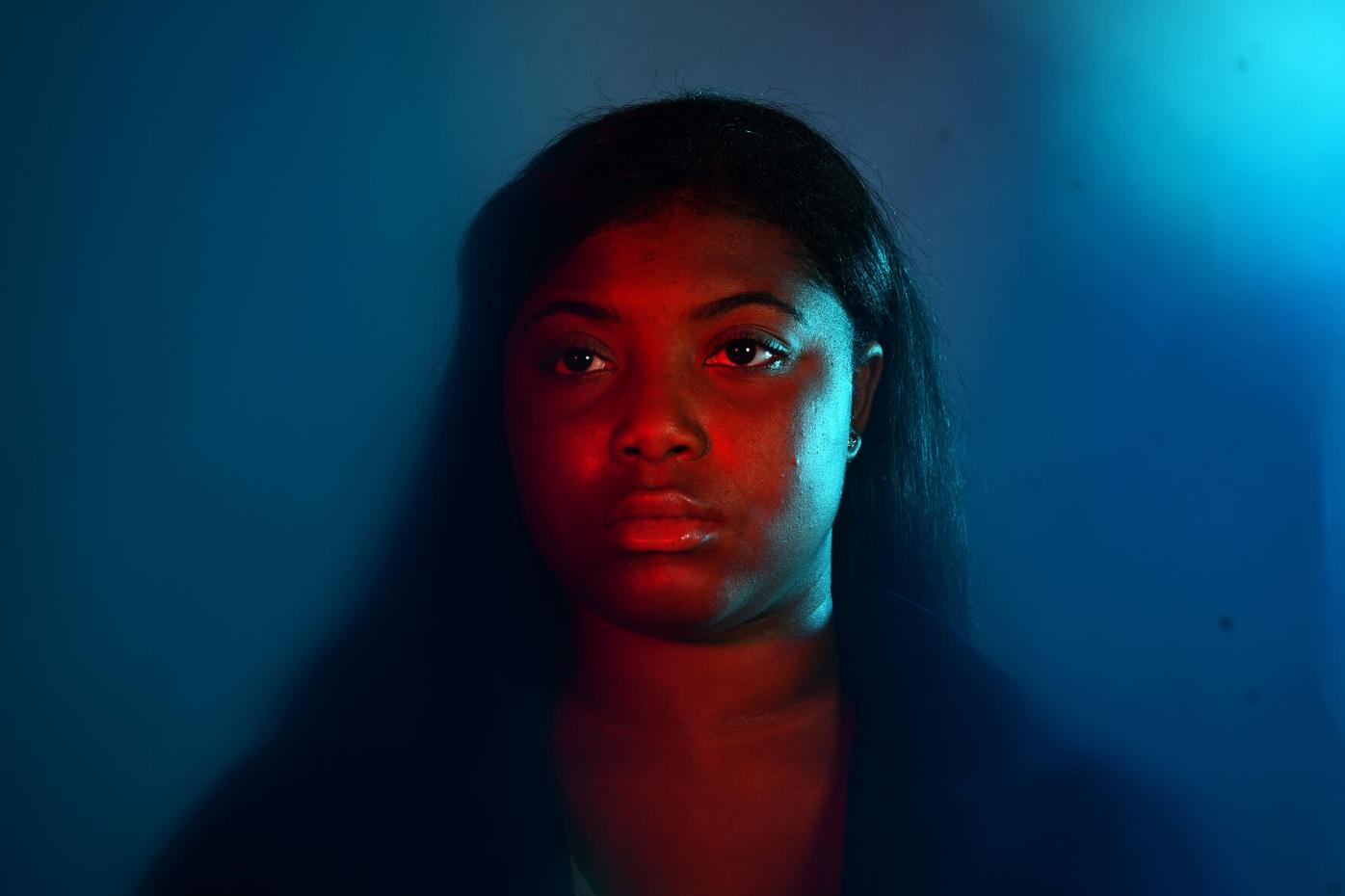 Taylor Iverson hated the Summit Technology Academy she attended in her junior year of high school, but it helped give her the confidence to study premed. She plans to research underlying conditions found in the Black community. 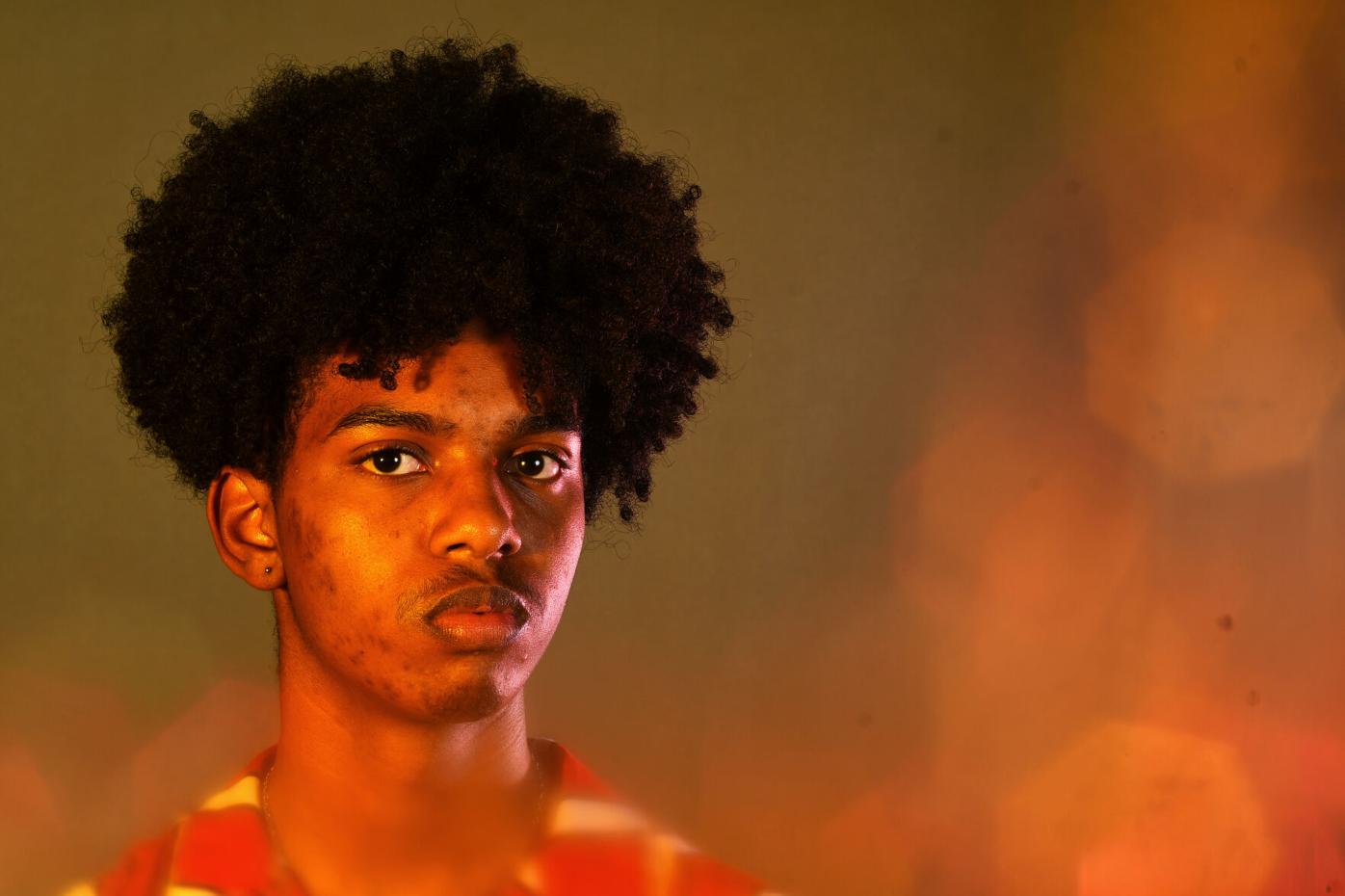 Anthony Moses III was not scared to be in the emergency room. “When I was a kid, (I had a) very simple life,” Moses recalled. “I never broke a leg — anything. I had never been rushed to the ER because something crazy happened. For me, it was more exhilarating.” The MU biochemistry major aspires to be an anesthesiologist. 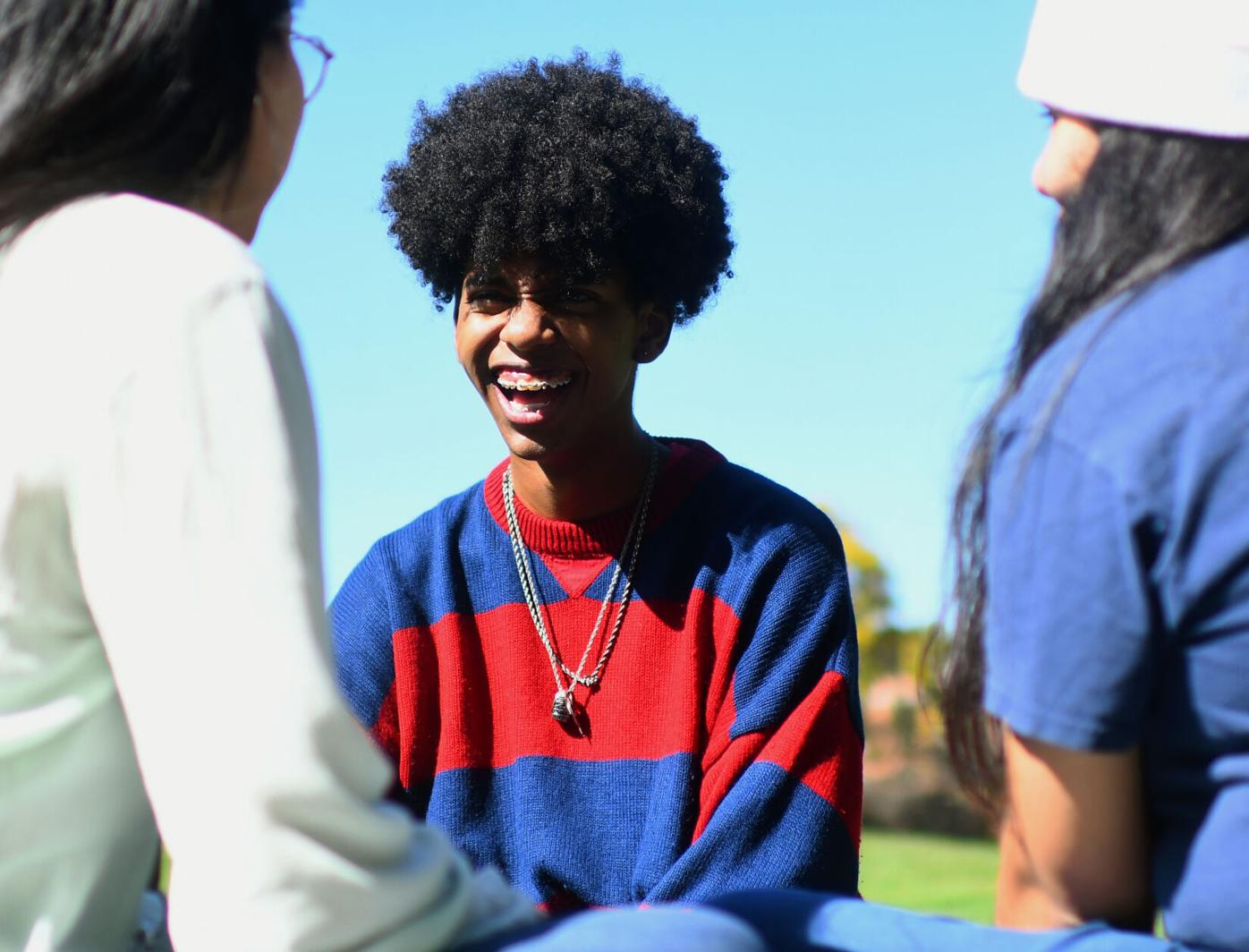 Anthony Moses III, center, laughs at commentary made by friends Anahi Alvarez, right, and Maria Yepez on Wednesday at Francis Quadrangle. As his first semester at MU went along, Moses said talking with his friends at the quad was a nice break from school. 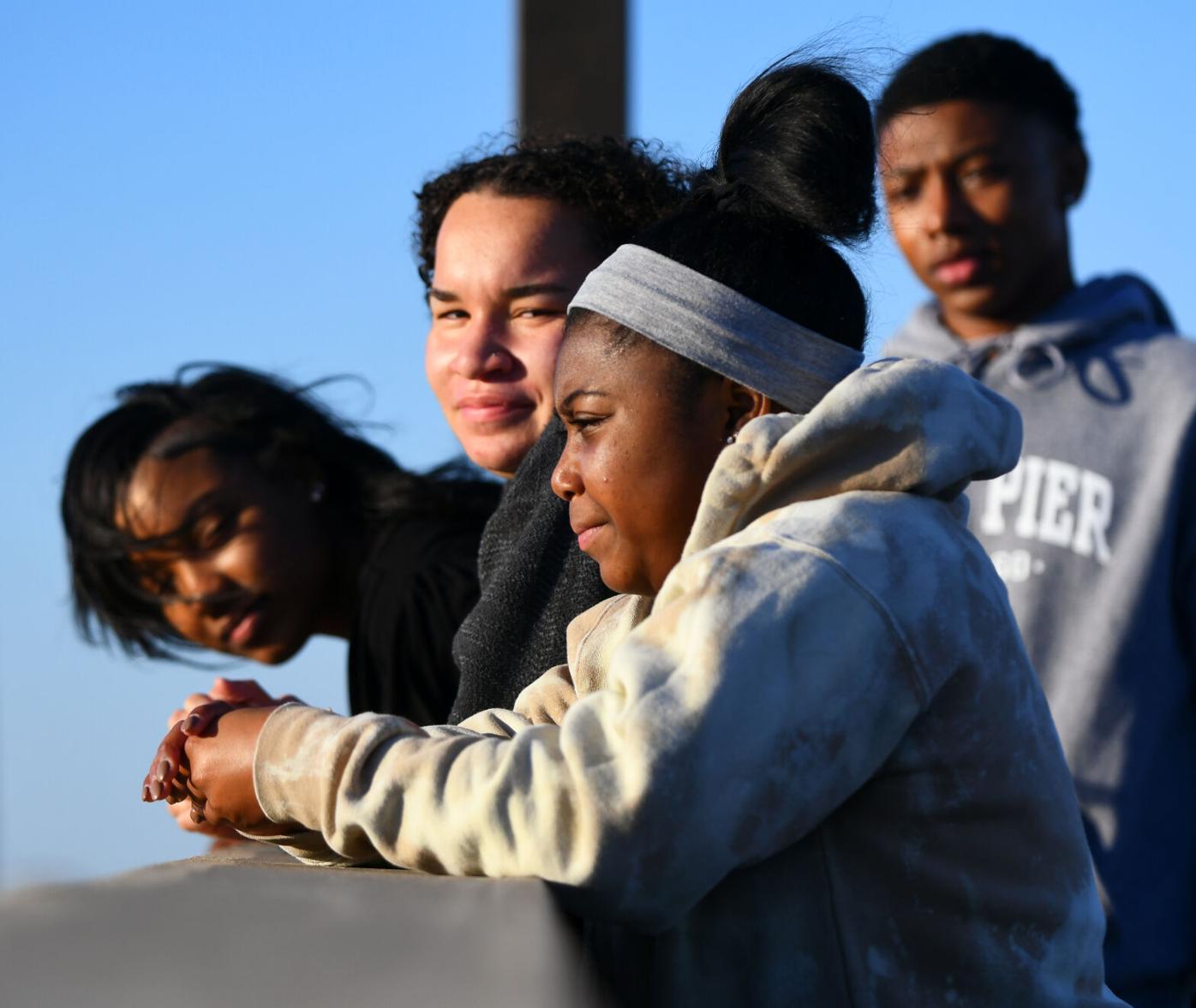 Taylor Iverson, front, stands at the edge of a rail along with friends, from left, Jaeden Cunningham, Makayla Hill  and Elijah Hudson-Moore on Wednesday at the Virginia Avenue parking structure. Iverson created TikToks and took selfies with her friends during sunset. 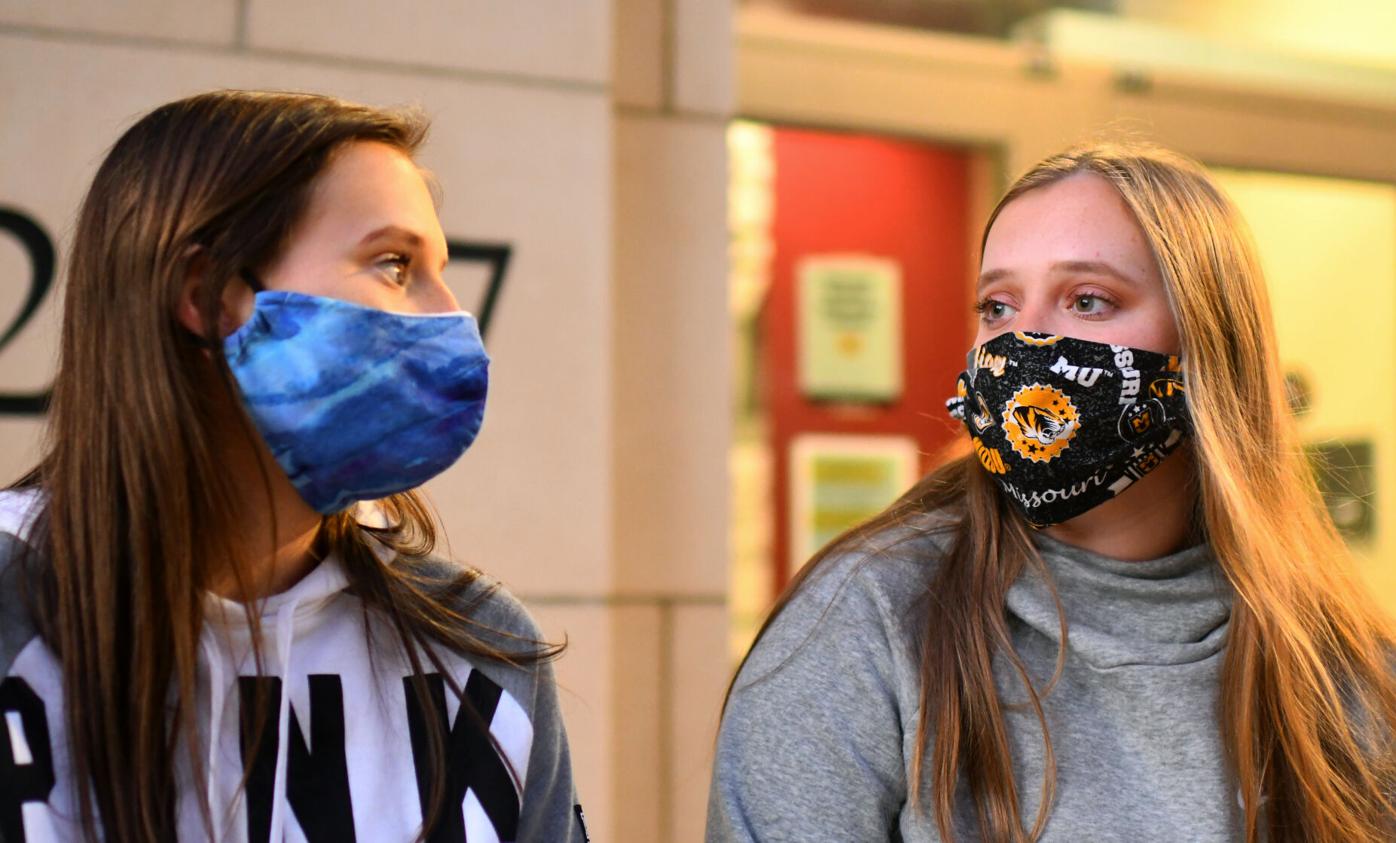 Hailee Coleman, right, looks at her twin, Hannah Coleman, on Wednesday outside Bluford Hall. Hailee described the dorms as being hard to navigate right now as a freshman because of pandemic restrictions. 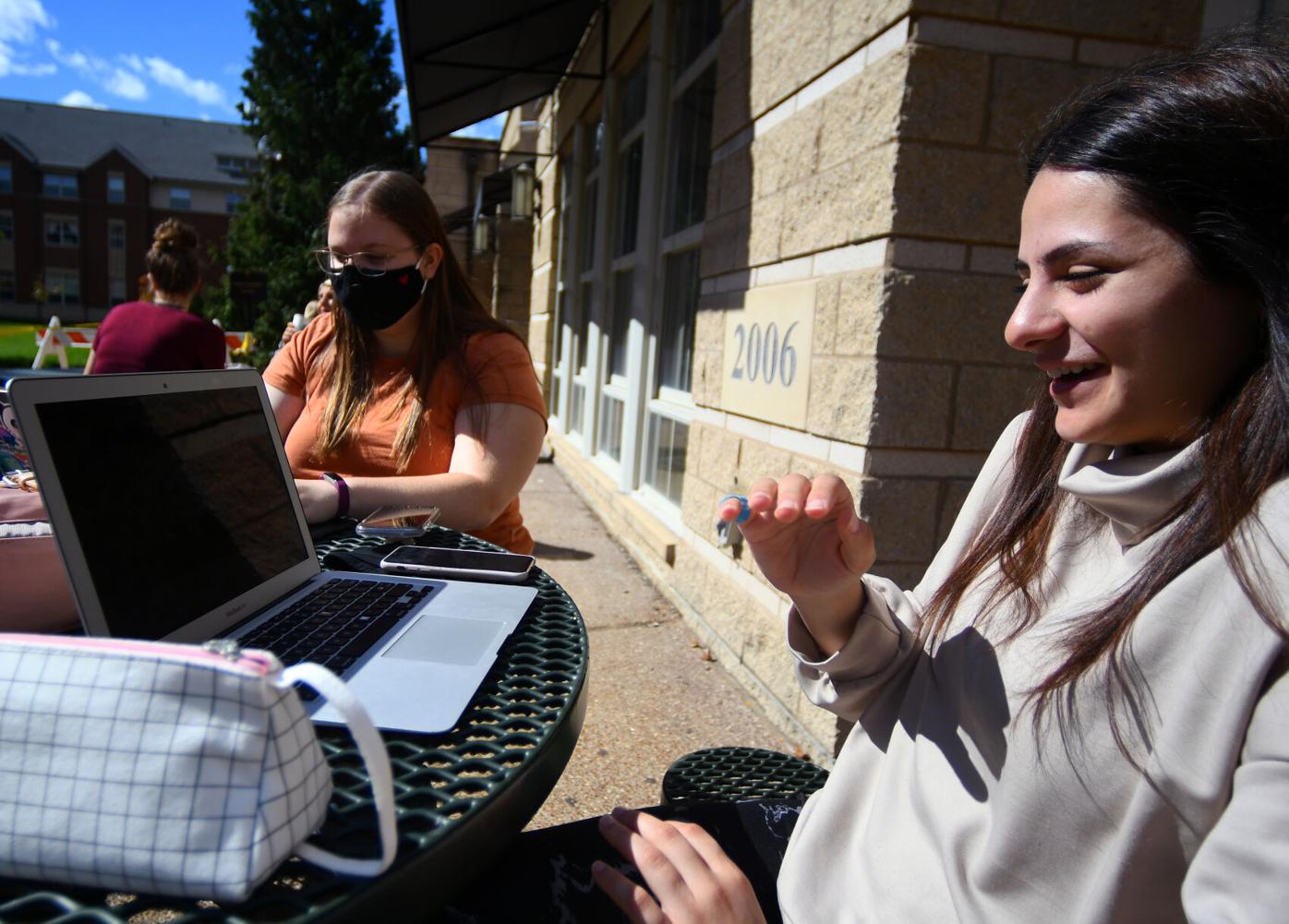 Fatima Almansouri, right, laughs at a comment made by her friend Grace Droptiny on Thursday outside South Hall. Almansouri worked on homework for her biology class while the weather was nice outside.

The MU freshman class of 2024, a cohort of 6,417 students, is in its seventh week of undergraduate programs. Those choosing medical careers are at the start of six or eight years of schooling to earn medical degrees, like Anthony Moses III and Hailee Coleman, or doctorates, like Fatima Almansouri and Taylor Iverson.

These freshmen are stressing over introductory biology and chemistry classes, driving around Columbia fighting over the “aux;” whether to play Megan Thee Stallion, Tyler the Creator, City Girls or Willow Smith; eating at “Southwest” with their Tiger plans; and trying to remain socially distant. They are mere weeks into the long journey of achieving their goals to become doctors and researchers. Their motivations are complex, diverse and personal.

When he was younger, Anthony Moses III of Kansas City was the baker of the Moses household. Cupcakes. Cookies. Pies. But his famous dish was his 7UP cake. Everywhere he went, it was expected that Moses would bring a baked good, and for Labor Day, that meant 7UP cake. Only Moses and his grandmother knew the recipe.

During high school, Moses’ interests shifted from baking to painting abstract art to tutoring other students. As he considered his future, he could not figure out his career aspirations — until he passed out.

In his senior year, Moses was standing in the hallway talking to his mom about making pancakes. He clenched a nearby door handle, collapsed and blacked out. His mother, pregnant with twins, ran toward him.

When he came to, he was groggy and did not remember talking about pancakes. His parents rushed him to a hospital, where a doctor diagnosed him with hypoglycemia, or low blood sugar.

Moses was barely coherent, his mother later told him, yet he bombarded the doctor with questions.

“I was being a way more nosy patient than I should have been for somebody who just passed out,” Moses said.

“Being in that moment when I was in the ER, I didn’t feel scared,” he recalled. “I understand that something was wrong with me, but I wasn’t scared. ... For me, it was more exhilarating, like, fascinating, that I got to be in that environment.”

The importance of the visit did not resonate until a month later. Moses began a deep dive into pre-med and shadowed an anesthesiologist’s assistant.

One of 92 freshmen studying biochemistry at MU, he is particularly fascinated by the way drugs interact with the brain. However, he wants to work with patients rather than in a pharmacy.

“Anesthesiologists have to understand how these drugs work with body, how they interact and how they keep this person asleep while they are in surgery,” Moses said. “It was just another good — perfect — combination of everything I wanted to do.”

‘If you get hurt, you tough it out’

Hailee Coleman was a four-sport athlete in her hometown of Farmington. It was a regional softball tournament in Kansas City with a bid at the nationals on the line. Then 11, Coleman slid into home plate. A piece of turf, used to align the basepath, was left uncovered. Her cleat gripped the turf, and her knee tweaked hard.

Coleman wrapped and iced her knee. She played in the next day’s game.

“The problem I think with sports in this day and age is you don’t get hurt. If you get hurt, you toughen it out,” Coleman said. “It’s a mentality that you don’t want to let down your coach.”

While receiving physical therapy, Coleman continued to play for a year before getting an MRI. The scan showed a large hematoma, a mass of blood, on her kneecap.

The surgeon performed a lateral release, an orthoscopic procedure drilling three holes and removing cartilage to relieve pressure in the knee.

Her injury caused a gradual termination of the sports she loved. She quit softball. Quit soccer. Quit volleyball.

Then, in her junior year, she dislocated her kneecap.

She quit basketball before her senior year, and about five months ago, she underwent invasive knee surgery.

Coleman plans to double major in psychology and biology as she prepares to be an orthopedic physician and change the culture surrounding sport injuries.

She looks up to the work of Aaron Stoker, associate director of the Thompson Laboratory for Regenerative Orthopaedics at MU and an associate research professor in the School of Medicine. She is interested in Stoker’s research on joint disease and ACL degeneration. “When I am reading it, I kind of take it a lot differently than I feel like most people would reading it, just because of all my issues with the knee,” Coleman said.

‘See how to solve those issues’

On the first day, the professor gave the class a confusing, challenging task, Iverson recalled. He handed them a cup of blue water and told the students to separate the dye from the water. She and her peers spent two days struggling over the solution. They conjured up schemes and hypothesizes to add salt or boil the liquid.

In the end, it was a simple task of dilutions and figuring out how many drops it took to reach the same concentration of dye.

“I am still mad about it. It happened two years ago,” Iverson said.

Later, she placed in the top 10 in a research competition with her capstone project on alcoholic beverages and the rate at which they healed wounds.

“I took the old Western theme of just pour some whiskey on it,” she said.

The rigorous course and her success in the competition gave Iverson the confidence to enter the medical field and study biochemistry and Black studies at MU.

She is a member of Missouri Black Women’s Initiative. She calls the discussion-based class a “Black girls club” and therapy group “with a whole bunch of people that look just like me.”

Iverson plans to concentrate her research in Africa.

In 2013, Fatima Almansouri’s younger sister, Eve, underwent a heart surgery at Children’s Mercy Hospital in Kansas City, where the family lives. Eve had a hole in her heart, causing “bad blood” to mix with healthy blood.

Post-surgery, Eve was physically drained and took awhile to get her energy back. Now in middle school, she plays volleyball and wrestles. She is “outgoing and a bit sarcastic,” Almansouri said.

“It’s very good to see her being able to do all these things every day,” she said. “Heart surgery isn’t easy. Your whole body functions through your heart. Her being able to survive was pretty inspiring.”

Eve’s surgery and recovery profoundly affected Almansouri. She has volunteered at hospitals and donated fleece tie knot blankets to the children. Now one of 302 freshmen in biological sciences at MU, she wants to be a pediatrician.

“Seeing the way the doctors treated my sister, I felt like I could belong there (in the pediatric unit),” Almansouri said.